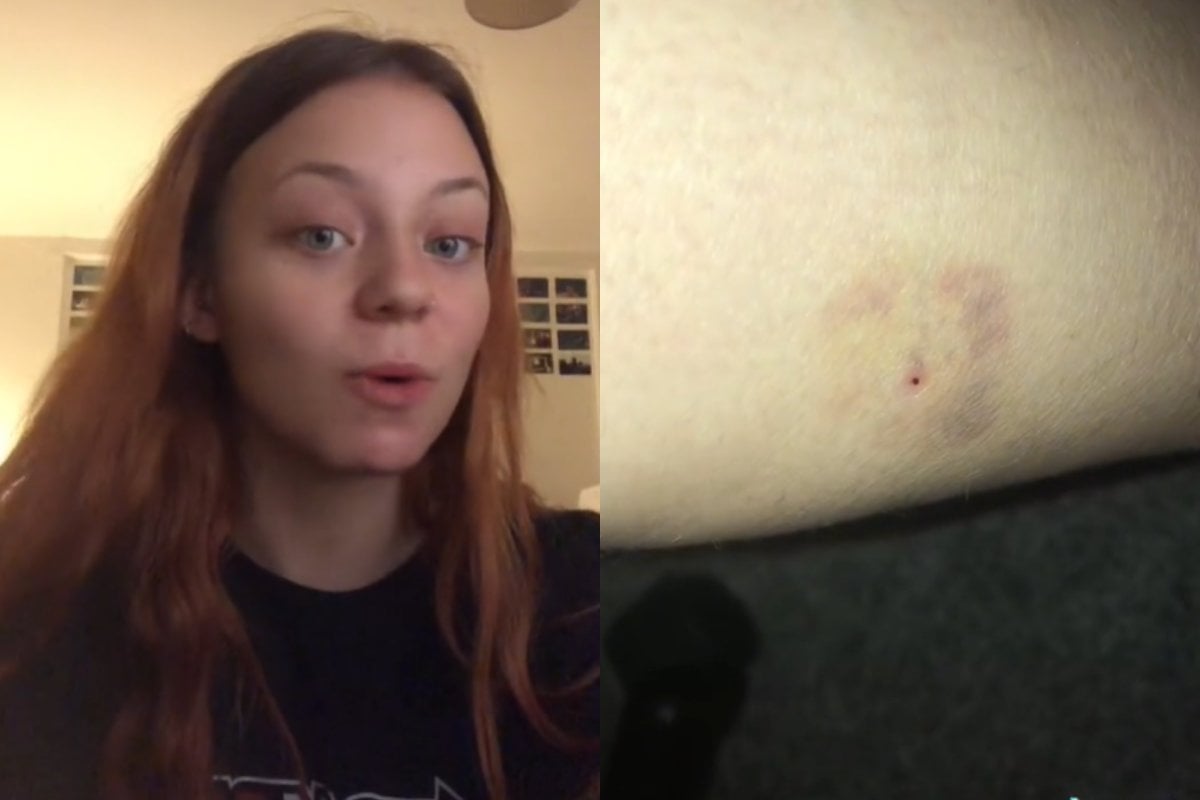 Two weeks ago, Zara Owen (not pictured) woke up in her bed with "sharp agonising pain" in her leg and no memory of the night before.

The 19-year-old University of Nottingham student had been out with friends at a nightclub in Nottingham, England when she believes she was spiked with a needle.

"I had less than I usually have to drink if I were on a night out and I ate beforehand," Zara wrote in a post on Facebook, and later shared on Twitter.

"I remember going in, through a metal detector and going to the bar. And that’s where my memory fails me."

That night, she texted her friend "insisting I was sober but according to him I didn't make sense". Her housemate ended up ordering her an Uber home.

"I woke up the next morning in my bed with almost zero recollection from that night."

"I woke up fine, no hangover or anything but a sharp agonising pain in my leg... I had to go to campus and I realised I had a massive limp. If my memory was there I would’ve neglected this but this is a thing that never, ever happens to me and it really confused me."

Zara said she decided to go to hospital to get checked out but later went home after waiting for several hours.

"I felt my leg and examined it to a further extent as I didn't get any help medically. I touched the part where I was in the most pain and I found a pinprick. I had been spiked," she wrote.

"Fortunately I am fine and didn't suffer any drastic side effects (only memory loss...) Spiking is a dangerous but horribly frequent thing imposed onto girls and we are running out of ways to protect ourselves.

"Pictures have come out of a girl in a backless top who has had this injection happen to her and if someone thinks 'oh it is easily exposed for them to do it,' I was in jeans. A needle went through thick denim straight into my leg."

Unfortunately, Zara isn't the first woman that has experienced needle spiking recently in the UK.

Here's what you need to know about this worrying trend.

Firstly, what is needle spiking and how common is it in the UK?

Needle spiking occurs when a person is injected with drugs without their knowledge or consent.

The UK has seen an alarming rise in needle spiking, with police receiving a number of reports of spiking taking place in nightclubs and venues across the nation in recent months alone.

Since the start of October, Nottinghamshire police said they have received 15 reports of alleged spiking with a sharp object.

And drink spiking hasn't stopped either.

The UK’s National Police Chiefs’ Council said there have been 198 confirmed reports of drink spiking in September and October across England, Scotland, Wales and Northern Ireland, as well as 24 reports of some form of injection, according to The Guardian.

"We are working at pace with forces, law enforcement agencies such as the NCA and other partners including the Home Office and universities to understand the scale of offending, establish any links between the allegations and ultimately bring any identified offenders to justice."

However, there are fears the statistics don't paint a full picture, as people may not report the incident to police or visit a doctor in time to have a blood test.

Who else has shared their stories?

A number of women have come forward to share their own experience of needle spiking across the UK. Here a just a few of their stories.

This month, 19-year-old Sarah Buckle recalled being taken to hospital after being allegedly pricked by a needle during a night out in Nottingham on September 28.

"Friends told me in the club I stopped communicating, I was unable to talk, I started to freak out, I tried to type something on my phone and I was unable to stand up," she told The Maidenhead Advertiser.

The next morning she woke up in hospital with bruising on her hand.

"I noticed my hand was really throbbing and bruising started to develop, there was a pinprick in the middle. I had absolutely no energy but I also felt like I had 10 Red Bulls. It wasn’t like a hangover and the worst feeling was extreme memory loss."

Sarah is now urging others who think they may have been spiked to report it.

"So many people I know have been spiked, it’s hard to report it so people don’t report it," she told the publication.

"There will always be a problem but hopefully speaking out will deter the people who are doing this, to know people are aware of it and looking out for it."

Another woman, Rebecca Derbyshire, noticed a needle mark in her arm while out for a hen's night in Liverpool.

"I felt something sharp go into my shoulder. It was a really unusual sensation," the 26-year-old landscaper told The Mirror.

Rebecca recalled feeling "a bit nauseous and dizzy" and "quite shook up".

When she later had a HIV and hepatitis test, doctors told her that whoever injected her ended up missing her blood stream.

"The doctors think it was probably muscle relaxants which could have temporarily paralysed me, but we will never really know until we find out who did it."

"I was on a night out and I got home and I had the same bruise like that," Isabella says in the video before showing her leg.

She went on to say that she had "no idea" what the mark and bruising was.

"I couldn't remember anything I just thought I had fallen over and buried myself."

In another video, Isabella said she went to the doctors who said "they can't do anything and to go back in three months to test for HIV".

So, what's being done about it?

The UK's Home Secretary, Priti Patel, has requested an urgent update from police on investigations following the recent reports of spiking.

Women across the UK are also boycotting nightclubs this week under the 'Girls Night In' campaign to ensure "the spiking outbreak is taken seriously by clubs and bars" nationwide.

According to the Girls Night In Nottingham Instagram page, the campaign is specifically calling for clubs and bars to "increase entry security", "provide free drinks protection devices," and "provide clear and obvious medical centre and a safe way to get home."

A petition calling for a legal requirement for nightclubs to search guests on entry has also garnered over 160,000 responses online.

P
pelangidejong a month ago

Reply
Upvote
I just listened to the podcast with this issue and I agree with Holly and Jessie to not talk about it too much and make young women fearful, having this in your head as well as other things when you want to have fun will cause anxiety. I’ve been independent for all my adulthood and you just keep your head up so you can do what you want instead of pretending to be on the phone and clutching onto your keys.
K
kittyb a month ago