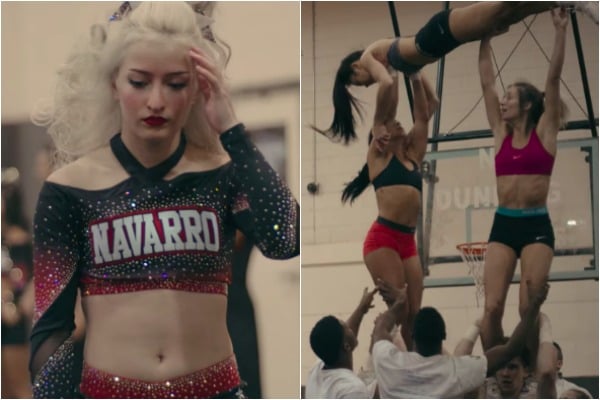 Warning: There are ever so slight spoilers in this article. But nothing major, we promise.

Remember Bring It On?

Yeah, that’s what I thought I was in for when I settled in on the weekend to watch Cheer on Netflix, to see what all the fuss was about.

Here’s the trailer if you’re yet to watch it. Post continues after video.

Well. Suffice to say the uniforms in Bring It On and Cheer are similar, and that’s about it.

This new six-part Netflix documentary, which follows the Navarro cheerleading squad in Texas through their preparation for the national title, is to put it simply: bone-crunchingly breathtaking. (FYI I mean the crunching part very literally).

Big call, I know. But I haven’t stopped thinking about it since binge-watching every single episode in one sitting.

The athleticism, the camaraderie, the physical and mental strain and strength, the narratives that bring each individual to the mat (cheerleader talk for where they perform), the bizarre cheerleading tricks and quirks  - it was all fascinating.

And it all boils down to two minutes and 15 seconds.

That's the tiny window of competition time the squad works all season for, and it was a final episode that had me edge-of-my-seat kind of clammy.

It also made something crystal clear in my mind's eye; cheerleaders are a hell of a lot tougher than footballers, and there's something quite satisfying about that.

A cheerleader's role on the football field has for so long been steeped in the sexist view that it was purely to look "pretty" and for entertainment's sake. But this documentary transforms that view for the audience, and shows that the end result we see on that football field, is the result of literal blood, sweat and tears along with extraordinary talent and precision.

The athletes in this sport are fearless, insanely dedicated and perfectly sculpted for their role in the squad. Because at the end of the day if they aren't, they are at extreme risk of permanent injury or even death. That risk is evident in the multiple injuries per episode you see while watching the show.

The other interesting element to this doco-series, is watching something from the winner's point of view.

Team hopefuls descend on the tiny Texan town every year for tryouts, hoping they'll be picked as part of the squad and get the chance to work with revered head coach Monica Aldama.

Watching the best of the best, you quickly realise the insane pressure that comes with having to uphold that title. It also flips the idea of a redemption story on its head. Instead of the team being the underdogs, the backstories that brought the teammates to the Navarro family are.

Gabi Butler is a celebrity amongst her cheer peers, and yet she is crippled with self doubt. Jerry Harris is still mourning the recent death of his mum. LaDarius Marshall has overcome extreme bullying. Moran Simianer's parents left her to live by herself as a child in a trailer.

Every single one of their stories could be a feature film on its own.

For so many of us on the outside, the reality of what it's like to be immersed in a world like dancing, gymnastics, pageants and cheerleading is seen purely through the lense of shows like Bring It On, Toddlers and Tiaras, Dance Moms, and even films like Little Miss Sunshine.

What I've realised after finishing Cheer, is there is so much more to these universes than overbearing parents and too much glitter. Especially at an elite level.

For many of the key players in the Navarro squad, cheerleading didn't just save their life - it gave them the sense of purpose and family they'd been missing.

This Netflix watch leaves nothing behind.

It's gritty, tense and heartwarming all at the same time, and I certainly won't be forgetting the gravity defying "basket catches"  and "candlesticks" anytime soon.

You can watch Cheer on Netflix now.

I agree that cheerleading has come a long way. The skill that these women need is incredible. But it will never not be sexist, not until teams of men are out there cheering on the ladies. It is, and always has been, women on the sidelines cheering on men, often in sports they are unable to play at an elite level.