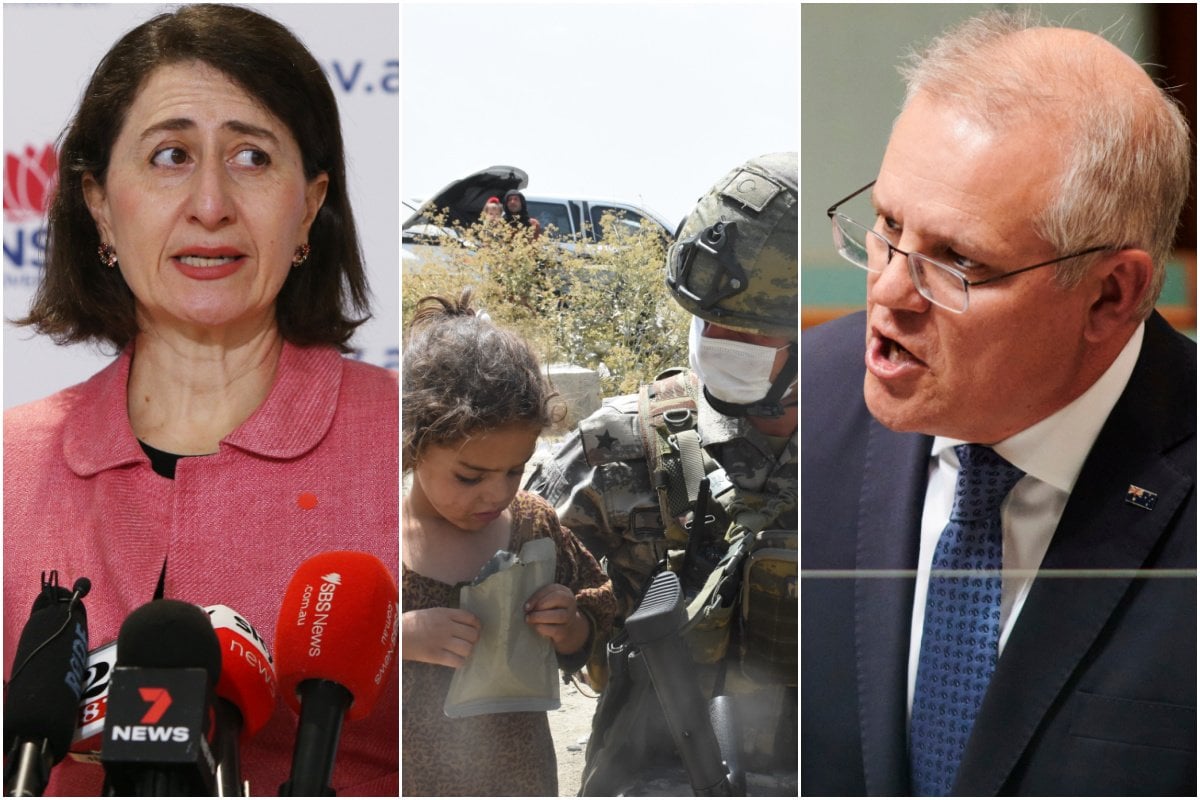 National plan out 'too dangerous' under Delta, new modelling shows.

New modelling has found at least 90 per cent of all Australians, including children, should be vaccinated against COVID-19 before the country can open up safely.

The third wave, driven by the more infectious Delta strain, is taking hold in younger and unvaccinated age groups.

"If we could achieve 75 cent vaccination coverage among children and adolescents, we could prevent 12,000 hospitalisations in these age groups," Quentin Grafton from the Australian National University said.

Addendum: What happens if we achieve 90% coverage in adults AND vaccinate children?

Even at our minimum recommended target, we still expect an eventual 5,000 deaths & 40,000 cases of long COVID.

Some 6.9 million cases with symptoms, 154,000 hospitalisations, and 29,000 fatalities could be the result of lifting restrictions at 70 per cent adult vaccination coverage, even with a 95 per cent vaccination level for those aged 60 years and over, the research found.

Scott Morrison says Australia "has to move forward" and open up when 70 per cent of the population is fully vaccinated.

"We will live with this virus like we live with other infectious diseases," he said on Monday.

State and territory governments are also pushing back against the plan that national cabinet signed off in July, before the Sydney outbreak seeped into other areas.

The national cabinet of Australian government leaders has asked the Doherty Institute to update its advice commissioned by the Morrison government, to reflect the current higher caseload.

But Western Australia is not budging from its zero-case goal, while Queensland warns it may not reopen its NSW border even at the higher jab threshold.

Two children have been found safe and well by police after allegedly being kidnapped from a home in Victoria.

An armed man entered the children's Blackburn North home sometime between 8am and 8.30am on Monday, allegedly assaulted the 32-year-old mother and left her gagged and bound. The father was at work at the time.

After an almost 12 hour ordeal, a Melbourne brother and sister are back home after being allegedly abducted from their home in the city's east. #9Today pic.twitter.com/6nscG0mQOA

Police allege the offender then stole the family's black 2014 Mercedes Benz sedan and fled the home with the children, aged three and five, who were missing for more than eight hours.

The children were located at 7.20pm in the suburb of Mitcham and appear to be safe and well.

Three men and a woman were arrested at the scene and taken into custody.

'At least one' freedom for NSW's jabbed

NSW Premier Gladys Berejiklian has promised fully vaccinated residents that they'll have "at least one" freedom restored to them by week's end - but lockdown won't be over.

The state recorded 818 new locally acquired COVID-19 cases in the 24 hours to 8pm on Sunday, as well as three deaths.

Ms Berejiklian says a record 738,000 people were vaccinated in NSW last week, with 5.9 million jabs in arms to date.

"I don't know any state or nation on the planet who abides by those [zero COVID] rules ... to suggest that living with Delta means zero cases is completely unrealistic. It's not happened anywhere in the world." – @GladysB #abc730 pic.twitter.com/8c6aIKx6eU

With that total to be reached on Tuesday, Ms Berejiklian on Monday night said the government would offer "at least one" eased restriction on residents who are fully vaccinated.

She did not outline what that would be, saying it was still being worked out by health authorities, but it would come by week's end.

"We won't have real freedom unless we hit the 70 per cent double dose vaccination," Ms Berejiklian told the Nine Network.

"In NSW, we are likely to have that (rate) at the end of October and hit 80 per cent - which gives us life before the outbreak, pretty much life as we knew it - in the middle of November.

"I have never suggested that life will be free once we get to six million jabs, but what I have said and will honour is that if you are fully vaccinated there will be at least one thing you can do that you cannot do now, just to give people a bit of relief."

Ms Berejiklian also promised to soon clarify whether school students will be able to return to classrooms in term four.

There are currently 586 COVID-19 patients in NSW hospitals, with 100 people in intensive care and 32 on a ventilator.

NSW Health currently manages about 500 intensive care beds but has a surge capacity of about 2000, with a ventilator for each bed.

Another hospital impacted by Vic outbreak.

Dozens of staff from another major Melbourne hospital are isolating after being exposed to COVID-19, as Victoria's coronavirus outbreak continues to escalate.

Victoria recorded 71 local COVID-19 cases on Monday, 55 of which were not isolating when they should have been, with the source of infection in 22 cases a mystery.

COVID-19 Testing Commander Jeroen Weimar said the state's health teams are working around the clock "to run after all these cases".

He said if Victorians continued to work together then "we can absolutely" put a ring around the outbreak and come out of lockdown on September 2.

A fourfold rise in mystery COVID-19 cases in the past week and hundreds of infected children are dimming any prospect of restrictions easing in Victoria as planned early next month.#covid19 #pandemic #lockdown #springst https://t.co/5HoLAcyjqz

"Those numbers will continue to rise but the onus is now on the wider community because this Delta moves wildly quickly," he told reporters.

St Vincent's Hospital confirmed 24 emergency department staff are now in quarantine after being "potentially exposed to COVID-19", a spokesman said on Monday night.

From 11:59pm Monday only authorised workers can access childcare, kindergarten and early childhood services, with workforce permits required to leave home for work.

The ACT government wants to see a greater focus on vaccinating children against coronavirus as it opens Pfizer registrations for under-30s.

Australia's expert immunisation panel is expected to reach a decision this week on the rollout of Pfizer to all children as young as 12.

The ACT's outbreak has grown to 137 cases as the virus spreads mainly in children and adults under the age of 45.

Chief Minister Andrew Barr believes there should be a greater national effort to vaccinate children.

"All Australian governments should make more effort to vaccinate more 12 to 15 year-olds with the TGA-approved vaccines, once the supply of those is available," he told reporters.

"And I would like to see a much higher rate of vaccination amongst that cohort."

There are more than 360 exposure locations across the city including schools, child care centres, a public housing complex, university accommodation and TAFE campuses.

Just over 36 per cent of ACT residents aged 16 and older are fully vaccinated.

The World Health Organization is fast running out of supplies for Afghanistan and needs help to ferry in 10 or 12 planeloads of equipment and medicine for its beleaguered people, a top official says.

"We estimate we've only got a few days left of supplies," says Dr Rick Brennan, who heads WHO's eastern Mediterranean region that includes Afghanistan.

"We have 500 metric tons ready to go, but we haven't got any way of getting them into the country right now."

Speaking from Cairo, Brennan said the UN health agency was negotiating with the US and other countries to help replenish strained stockpiles.

Meanwhile, an escalation of violence is expected at Kabul's international airport as Australia continues to rescue hundreds of citizens and visa holders.

Home Affairs Minister Karen Andrews said the situation at the gates of the Hamid Karzai International Airport was "diabolical" and the government was acting as fast as it could to get people out. 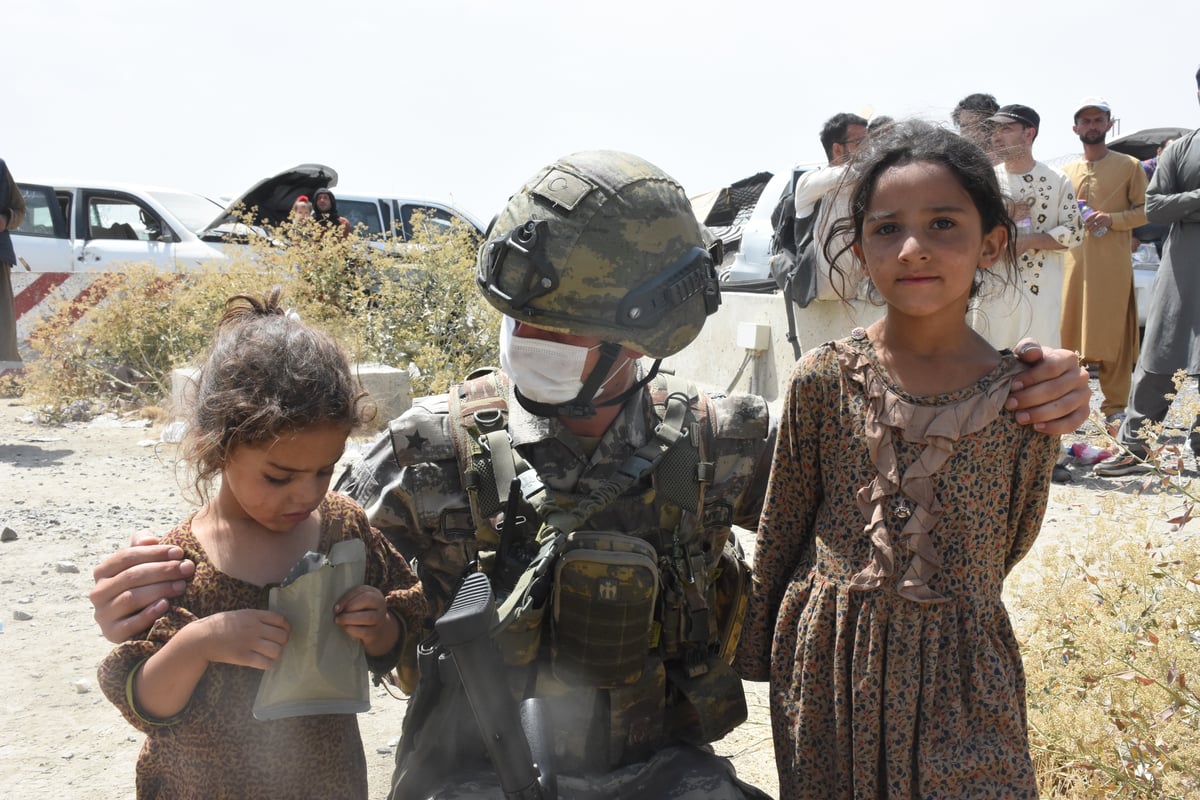 Children are among the biggest victims of the evacuations as temperatures exceed 35 degrees. Image: Aykut Karadag/Anadolu Agency via Getty.

It is understood an Afghan security officer and at least seven civilians have died amid the chaos around the airport.

Since August 18 more than 1000 people have been lifted out of Afghanistan as part of Australian efforts to evacuate people from the Taliban-controlled nation.

The Taliban have executed a well-known Afghan comedian – who carried on telling jokes as they dragged him away. They have also sentenced the brother of an Afghan translator to death, according to letters obtained by CNN, accusing him of helping the US and providing security to his brother.

The Taliban have sentenced the brother of an Afghan translator to death, according to letters obtained by CNN, accusing him of helping the US and providing security to his brother, who served as an interpreter to American troops. https://t.co/Gjx11KNfnr pic.twitter.com/SJ7svMtfUO

Australian co-captains Danni di Toro and Ryley Batt have been confirmed as the team's flagbearers for the Tokyo Paralympics opening ceremony.

It is di Toro's seventh Games, while Batt is a four-time Paralympian and aiming for his third straight gold medal as a member of the Steelers wheelchair rugby team.

They will be the only members of the 179-member Australian team at Tuesday night's opening ceremony.

Admitting to tears when she was told, di Toro called it an "incredibly humbling" honour.

"When people see and appreciate what you do, how much you care and how fiercely passionate you are, it's really quite emotional and overwhelming," she said.

"I feel like there are so many people in our team that this honour could have been bestowed upon.

"That it's Ryley and I is a bit mind blowing."

A former world No.1 wheelchair tennis player, di Toro competed in the sport at five Paralympics, winning a silver and a bronze.

She then switched to table tennis for Rio.

Batt was 15 when he made his Paralympic debut at Athens and he won silver in Beijing before gold at the past two Games.

After an early taste of Spring over the weekend, much of the east coast will this week be pummelled by wild weather.

Dubbed the 'bomb cyclone' due to the rapid onset of weather, temperatures in NSW have dropped by more than 10C.

A "bomb cyclone" is headed for NSW over the next 48 hours. #9Today https://t.co/X3pSSkGsSj

The Bureau of Meteorology has issued a severe weather warning for damaging winds and surf for Sydney, Wollongong, The Entrance, Woy Woy, Bulli, Port Kembla, Kiama, Huskisson and Ulladulla.

Cuomo says it's 'unfair' he had to resign.

In his final public remarks as governor of New York, Andrew Cuomo complained about what he called the unfairness of the state investigation that concluded he sexually harassed women who worked for him.

After two women went public with accounts of harassment in March, Cuomo referred the complaints to New York Attorney General Letitia James, as required by law, who appointed two outside lawyers to investigate. Lawmakers in the New York Assembly began an impeachment investigation.

The damning report released on August 3 by James, a fellow Democrat, was the beginning of the end of Cuomo's decade as governor, a tenure long marked by a bruising, pugnacious approach to dealmaking that left him bereft of allies.

Andrew Cuomo gave his final address as N.Y. governor, maintaining his innocence against sexual harassment allegations by nearly a dozen women and saying the state probe was "designed to be a political firecracker."https://t.co/1OlPtYDzWk

"You know me: I am a fighter, and my instinct is to fight this, because it is unfair and unjust in my mind," Cuomo said in pre-recorded remarks aired at noon on Monday. But he had decided not to, he said, because "prolonging this situation could only cause governmental paralysis."

The investigations into Cuomo are ongoing.

- Germany's health minister says the key metric for COVID-19 should now be hospitalisation not the virus incidence rate due to the fact 58.9 percent of the country is now vaccinated.

- Kamala Harris has used her first visit to south-east Asia to reiterate the superpower's commitment to security partners following the fall of Kabul.