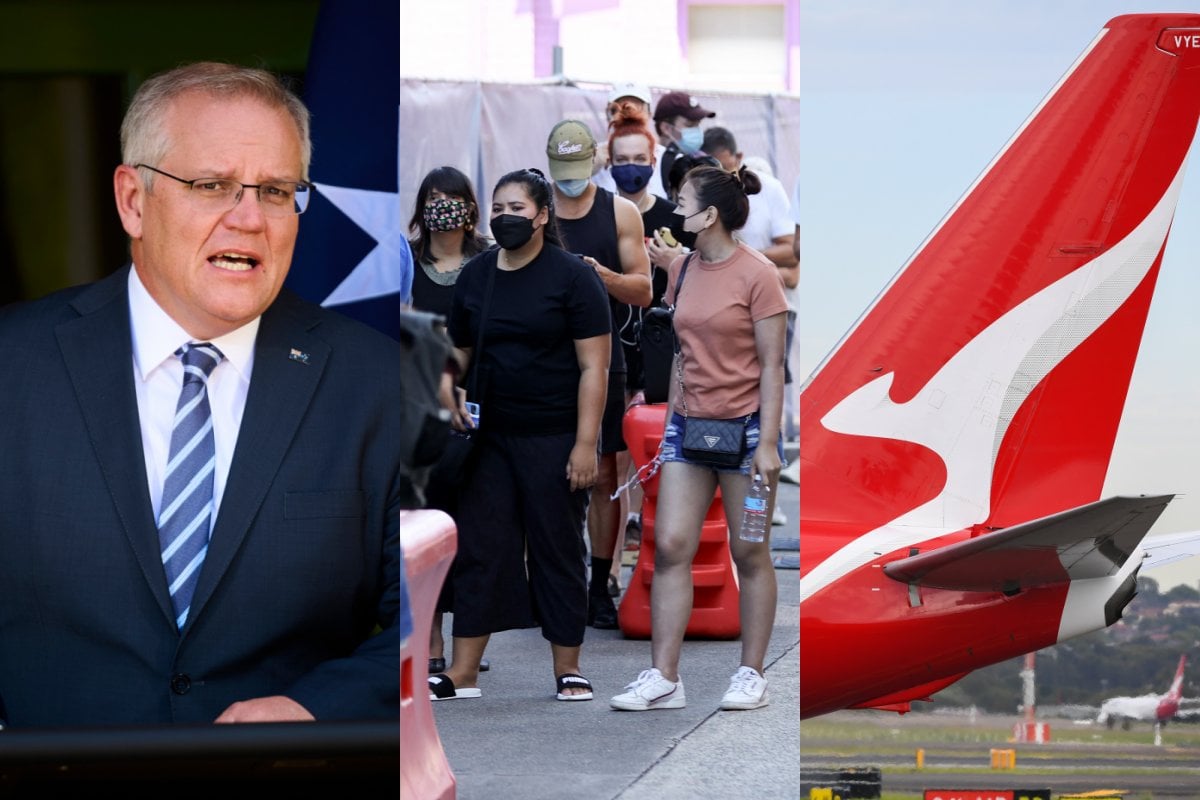 The prime minister will discuss an indoor mask mandate with state and territory leaders after the ACT reimposed the measure and other states weigh it up.

Scott Morrison will use the "informal" national cabinet meeting on Wednesday to urge states to hold the line on restrictions, having dismissed a return to lockdowns.

"We're going forward to live with this virus with common sense and responsibility. There will be other variants beyond Omicron and we have to ensure we are putting in place measures that Australians can live with."

National cabinet will also receive advice on whether three jabs will be needed for someone to be defined as fully vaccinated, as well as if the time frame between a second and third jab should be shortened.

More than 1.3 million Australians have received a booster shot and the double-dose vaccination rate for people aged 16 and older has surpassed 90 per cent.

It comes as the Nine newspapers cite modelling being prepared for national cabinet predicting up to 200,000 cases a day by late January or early February if there are no low to medium level restrictions in place.

Exclusive: Surging Omicron infections will overwhelm the health system unless some restrictions return, according to modelling prepared for national cabinet | @Dana_Adele https://t.co/lsCsswon5w

As thousands of Australians fly interstate for Christmas, a new survey has found many travellers remain concerned about borders being slammed shut.

More than six in ten travellers said they were discouraged from booking flights amid border restriction uncertainty, a survey commissioned by the Australian Airports Association found.

More than half of people were worried they would be placed into lockdown and forego their savings on lost flights and accommodation.

"It's much better if people are doing the same thing," he told the Ten Network.

Meanwhile, those still planning to travel are contributing to long lines at testing stations and in labs across Australia.

Prime Minister @ScottMorrisonMP will hold crisis talks with state and territory leaders today as Omicron spreads across Australia. It comes amid huge queues for testing, with holidaymakers and those who have been exposed to the virus lining up for hours. pic.twitter.com/rWwSQ14Wnd

Stressing he wasn't criticising Queensland or other low-COVID states that require travellers to prove they're negative, NSW Health Minister Brad Hazzard said tens of thousands of "tourism tests" were getting in the way of clinically directed tests.

"How we strike that balance is a challenge," he said, adding he was consulting with Queensland and Victorian colleagues.

"We don't have the answer yet ... until we get there we just need to recognise, we're going to be under that pressure."

Premier Dominic Perrottet said he would raise the issue of RAT availability at national cabinet on Wednesday.

More than 450 COVID-19 testing locations are open across NSW, many of which are open seven days a week.

Dozens of mental health beds specifically for women will be made available in Victoria, in an Australian first.

Thirty of the mental health beds, the first of their kind in the country, will be set up at Melbourne's Albert Road Clinic, and five at Shepparton Private Hospital.

The private beds for public patients were a recommendation of the royal commission into the Victorian mental health system and are in addition to the government's $492 million budget commitment to deliver 144 new mental health beds.

So proud that we’ll deliver this Australian-first Women’s mental health facility in Melbourne and Shepparton next year - so every Victorian woman can get the safe treatment and support they deserve. https://t.co/qKOMPRtSKt

Mr Merlino said the beds would ease pressure on the public system and provide a safe and inclusive environment for women suffering perinatal concerns, eating disorders and other mental health conditions.

"Many Victorian women told us through the Royal Commission their experiences within the system haven't supported their recovery effectively – and we've worked with many of those women to design services that will meet their needs," he said.

The bed provision will start being rolled out from April to mid-2022, and be managed by an extra 60 full-time health workers.

A senior Queensland police officer has been charged with raping a woman more than two decades ago.

The 52-year-old commissioned officer was off duty when he is alleged to have sexually assaulted a 27-year-old woman in 1999.

Detectives from the Child Abuse and Sexual Crime Group charged the officer on Tuesday.

The Brisbane-based officer has been suspended and is due to face the Brisbane Magistrates Court on January 19.

A commissioned officer carries the rank of Inspector or above, but police could not confirm his rank at the time of the alleged assault.

Many children will unwrap their first mobile device this Christmas, but safety advocates warn these presents can come with a sinister side.

A federal parliamentary inquiry examining social media and online safety has been told profit and privacy are being prioritised at the expense of children's safety.

Her daughter, Carly, was murdered in 2007 by serial pedophile Garry Francis Newman, who befriended the 15-year-old online.

Ms Ryan told the inquiry many social media platforms were unwilling to cooperate with law enforcement due to concerns about privacy.

"When it comes to young people's safety, every measure should be taken," she said on Tuesday.

"We are seeing more focus on privacy than there is on the protection and safety of young people."

"It is unreasonable to expect children and young people to keep themselves safe online," she said.

The inquiry is due to report back in February.

- The US Food and Drug Administration is set to authorise COVID-19 treatment pills from both Pfizer Inc and Merck, promising new oral treatments that can be taken upon onset of symptoms at home to help prevent COVID-19 hospitalisations and deaths.

...and liftoff of the @SpaceX #CargoDragon carrying 6,500 pounds of science, supplies and goodies to replenish the Exp 66 crew on Wednesday. More... https://t.co/vqpqMrkDmU pic.twitter.com/RoR42bxGxN