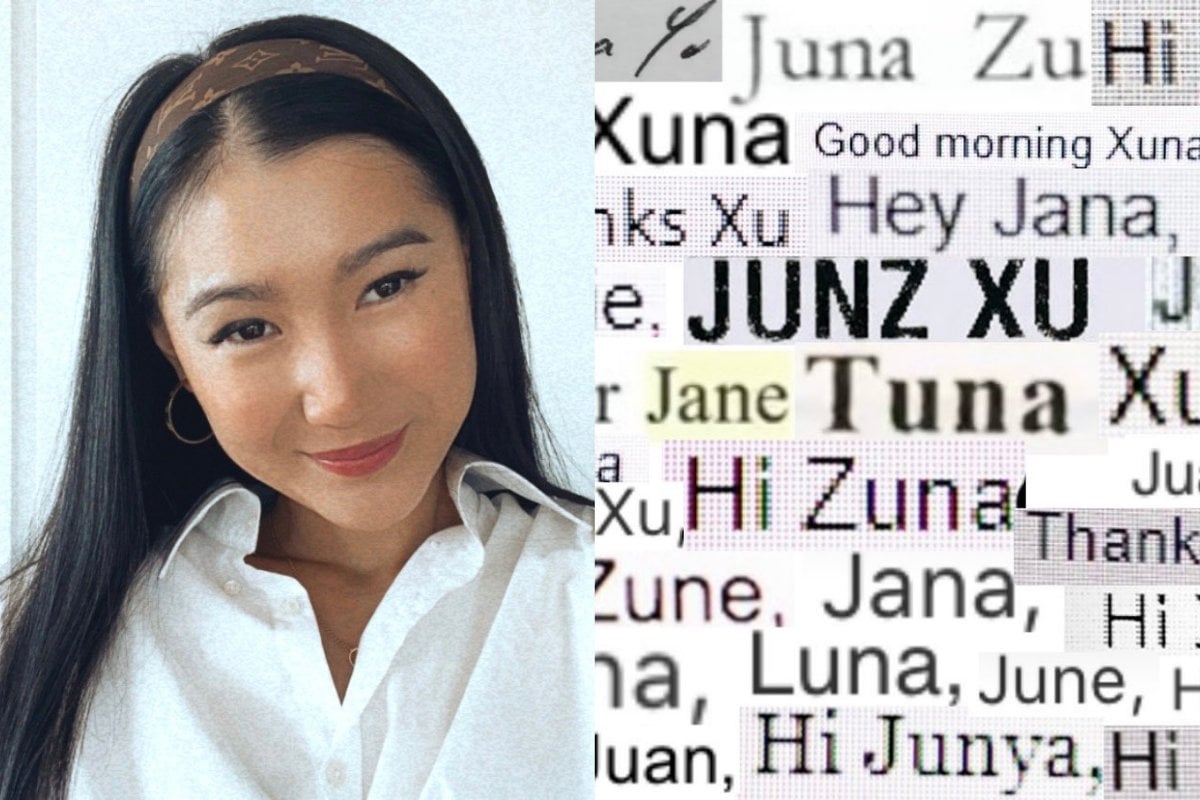 What do you get when you mix the sixth month of the year with smelly tinned fish and a petting zoo? My name: Juna Xu.

Welcome to the unfortunate series of events that is my life.

My name gave people a chance to poke fun at me during my childhood.

Listen to The Quicky, Mamamia's daily news podcast, on whether fetishising Asian women led to the Atlanta mass shooting. Post continues below.

I was the subject of ridicule; being told I was everything from pungent canned tuna to the pregnant teenager movie character Juno MacGuff. Coupled with my Chinese surname (pronounced 'zoo'), it presented kids and teachers the opportunity to come up with a range of puns and jokes.

Teachers would hesitate to pronounce my name and countless of my school awards were addressed to a middle-aged Mexican man named Juan.

The icing on the cake? Finding out that even on my brother’s birth certificate (may I stress this is a legal document?) my name is spelt T-U-N-A. I am legally a fish.

Sure, most of the name teasing was harmless and of a satirical nature growing up, but it did get to a point where it took a toll on my psyche, affected my self-worth and forced me to question my identity - especially when it happened on a daily basis.

I was as young as 10 and would lie awake at night thinking about what blissful life I would be living if my parents had just given me a 'normal' name like Jane or Julia.

Twenty-five years of lugging these six letters around and the nicknames keep on coming, so much so that it has become a running joke to see how creative one can get trying to spell my name.

From Juanana to Xuna, Junie, Juju, Xuna Yu, Jana and even just Xu Xu, people really do get innovative with what is, in my opinion, a relatively simple name to spell. I’ve learnt to accept it with a glass-half-full and see it as a source of pure entertainment every time I open up another email and see version #14356 of how to spell Juna Xu (seriously, it’s right there in the email, the spelling does not change!).

Hilarity aside, a name is a reflection of your presence, so when people constantly bungle it, it’s a sign that they’re not acknowledging you as a person or human being - which can become incredibly hurtful.

It also makes you question: what are these spelling errors implying? Is it highlighting the fact that maybe I am to blame because my name is actually too confusing to comprehend for the majority of people? Is it a reflection of the sender’s laziness and lack of proofreading? Or does it say something about our society, which supposedly prides itself on progressiveness and multiculturalism?

I was born - and have lived - in Australia my entire life, I (unfortunately) only speak English, I went to an Anglo-dominant school and studied journalism at university - a degree based on the English language.

But despite this, my unpronounceable first and surname depict otherwise.

Chinese people attach greater importance to the meaning of a name compared to Western names, which instead favours phonetic and syllabic combinations.

So, when I was born, my Chinese father and Korean mother thought they were doing a favour by giving me a lucky name that represents strength, prosperity and good health. Obviously, it didn’t cross their minds that two words and six letters could cause such an inconvenience for their daughter - and everyone else trying to spell and pronounce it. I don’t blame them, either.

On the other hand, you have Asian families giving their children Anglicised names in hopes it will help them assimilate easily into society, provide them a leg up in life and avoid future career problems. In fact, my best friend is a prime example of this. Her Chinese parents opted for the most Aussie moniker, Sharon - a name often likened to the 'bogan Karen'.

As it turns out, there is logic behind this tactic; research shows non-Anglo names can still negatively dictate an individual’s career, talents, abilities and personality - even in a country as westernised as Australia.

Moreover, a 2012 study by New Zealand’s Victoria University of Wellington found that the easier your name is to pronounce, the more trustworthy people will assume you are, with the reverse also being true - a complicated name evokes untrustworthiness.

Honestly, RIP to me.

The most recent is a 2017 University of Sydney study, which found 13 per cent of job applicants with Anglo names were invited back to a job interview, compared to just 4.8 per cent of Chinese-named applicants.

Note that these studies are only a reflection of recent times, too.

It’s this continued xenophobic environment that has coerced people into dissociating themselves with their birth identity.

Take 'whitening resumes' as a prime example - a practice also common for those of European and Jewish heritage. An individual will leave their skill set untouched, but supersede any traits of 'Asianness' or whatever foreign characteristic that might 'alienate' them on their resume like having a pseudo Anglicised name, or altering their nationality or location.

With this in mind, it’s also important to remember a recruiter will only dedicate approximately five to seven seconds browsing a resume so, how many recruiters took a quick glance at those six letters at the top of my resume and tossed it aside? How many assumed I didn’t have adequate skills because there was a good chance I would be a foreigner? What would my career currently look like if I had built up the courage to whiten my resume?

To answer the latter, I only have to look towards notable Hollywood stars who divorced their birth name to increase their chances of obtaining their dreams. Demi Moore? Her real name is Demetria Guynes. Natalie Portman’s real name is Natalie Hershlag. English actor Ben Kingsley? His birth name is Krishna Bhanji.

Despite the growing number of reputable Asians making it into the public eye in recent years, it’s evident there is a monumental amount of work that still needs to be done until we’re finally able to shed this perpetual foreigner stereotype.

While I’ve digressed about my conundrum of a name and have spent most of my childhood deliberating as to whether I should conform to Western standards by converting to a Jane or Julia, the fact of the matter is that the onus falls on me and everyone else who has a non-Anglo name to change this discourse.

Just like British actor Thandiwe Newton recently revealed she is reclaiming her birth name Thandie, after 30 years in the film and TV business, it’s time we embrace our birth identity as a reminder of who we are and where we come from.

It’s taken me a quarter of a century to comprehend this, but I know I will be holding onto my name forever because I am proud and grateful for my Chinese and Korean heritage.

Those six letters are a reminder of the hardship and sacrifices my parents made in order to provide a life for me in Australia.

So, to everyone who has thought of adapting their birth name, please take a dose of my advice. Your name may have the ability to place you at a disadvantage at some points throughout your life, but remember hardships only make you a stronger and better person in the end.

And on that note, it turns out Karens don’t have it that bad, after all.

Juna Xu is a journalist and the co-host of lifestyle podcast Crazy Biatch Asians. Follow her on Instagram @juna.xu and @crazybiatchasians.

Y
yeahyepyes a year ago

Reply
Upvote
You talk about'whitening' but it's more about aligning yourself with the majority. If you were in China you wouldn't have an issue with your name, conversely if someone with a traditional western name was working in China then they may find the locals struggle with the spelling/pronunciation. This is precisely why so many people with foreign names choose another name that is 'normal' by local standards.
S
simple simon a year ago

Reply
Upvote
1 upvotes
Sorry I haven't read the article yet, but as someone who went through Primary School and early High School with an unusual ethnic name, I just wanted to say something regarding this issue. This is what I hate about modern western society making fun of celebrities giving their children unusual names.  It normalises mocking unusual names. Kids learn what they do from adults, but without the social etiquette of only doing it behind someone's back. This is one place they are learning it from.
Oh and for all the supposed sympathy that such children will be made fun of at school: you don't need to worry. They are the children of the rich and famous. Everyone will be dying to be their "friend". And regardless, aren't we as adults supposed to showing kids not to do such things?
News
General
Opinion
True Crime
Politics
Sport
Explainer
Entertainment
Celebrity
Reality TV
Movies
TV
Books
Rogue
Royal
Lifestyle
Beauty
Fashion
Weddings
Home
Wellness
Health
Fitness
Travel
Food
Parents
Before The Bump
Pregnancy
Baby
Kids
Teens
School
Parent Opinion
Work & Money
Money
Finance
Career
Lady Startup
Relationships
Sex
Dating
Separation
Friendship
Family
Real Life
Couples