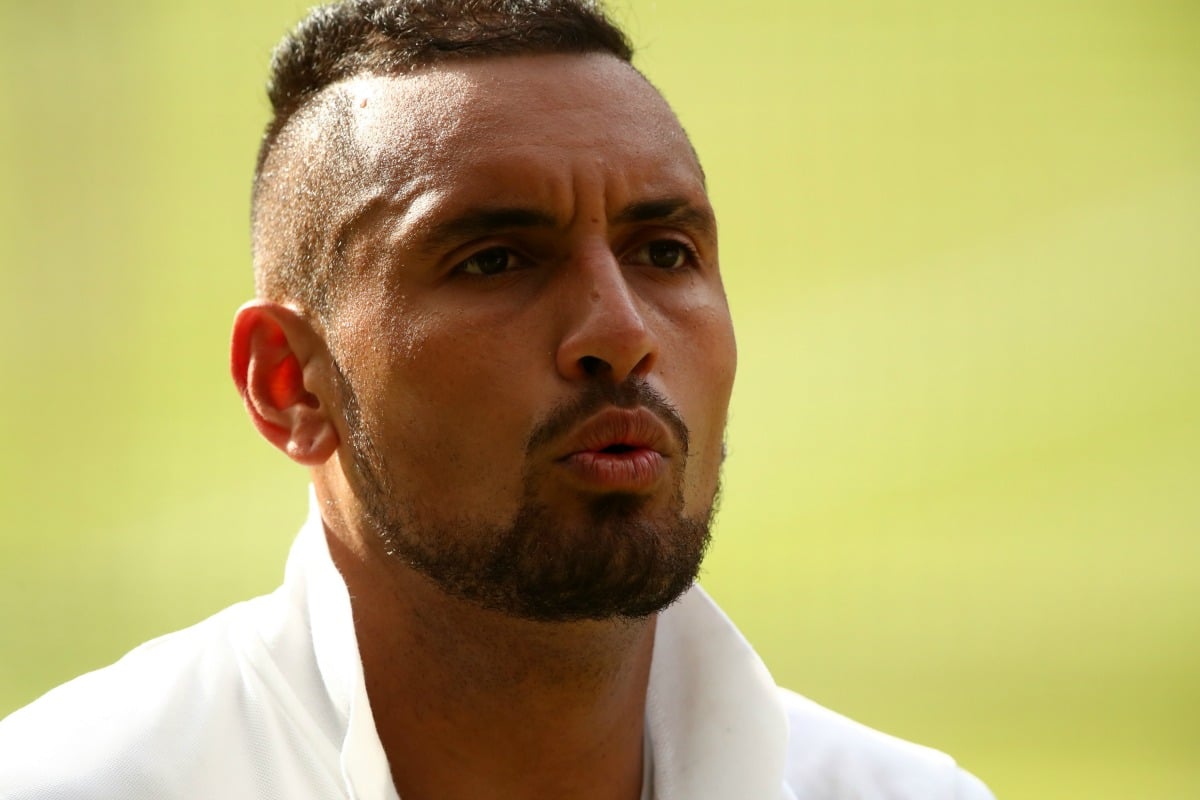 1. “You’re a disgrace.” Nick Kyrgios hits out at Rafael Nadal and umpire during Wimbledon loss to the World No. 2.

An audacious under-arm ace and the second-fastest serve in tennis history haven’t been enough to spare Nick Kyrgios from a drama-charged second-round Wimbledon loss to Rafael Nadal.

Kyrgios blew up in his second round loss to the World No. 2, accusing the Spaniard of time wasting, not playing within the sport’s rules and blaming the umpire for not holding Nadal to account.

When 3-0 down, Kyrgios complained to umpire Damien Dumusois he wasn’t given the chance to challenge a call because the official’s eyes were at the other end of the court.

Meanwhile in #Wimbledon…#Kyrgios tries to hit #Nadal. And succeeds. pic.twitter.com/7YjKFN2QBl

He also took issue with Nadal’s bathroom break at the end of the first set.

“What is this stuff bro? Play the game, play the game. It’s stupid,” Kyrgios said. “You [umpires] are the worst of the lot, you’re so biased. Just kiss up to his bum, it’s a joke.

“I’m serving next and he happens to take a toilet break now. Why?”

Kyrgios walked a fine line when he branded the umpire a "disgrace" midway through the third set.

"You feel entitled just because you’re sitting up there and have a job. You’re no one. You don’t know that. You think you’re important, that’s the problem.

"You have no idea. You’re a disgrace."

Despite his hotheadedness, Kyrgios' head was in the game during the thrilling third set.

"He was a tough opponent. When he wants to compete, he's one of the toughest opponents you can face," Nadal said after the match, not wanting to dive too deep into Kyrgios' on court behaviour.

"It was an important victory for me. Sometimes it's tough to see a couple of things on court.

BREAKING: The Australian student missing in North Korea, Alek Sigley, has been confirmed as "safe and well" in China, Scott Morrison said. https://t.co/OVsCzrFz5I

Australian student Alek Sigley says he is feeling great after being freed from detention in North Korea, but remained tight-lipped about his experience.

The 29-year-old arrived in Beijing on Thursday and will fly to Tokyo to reunite with his wife.

But he only responded with "aah" when asked what happened in Pyongyang.

He was accompanied at the airport by Swedish diplomatic officials who negotiated with North Korea on Australia's behalf to secure his release.

Mr Sigley was taken from the airport to the Australian embassy in Beijing.

His relieved father Gary Sigley was hopeful of learning more about his son's detention shortly.

"I am sure in the coming days and weeks there will be some more information about what has transpired," he told reporters in Perth.

"I cannot imagine how wonderful it will be for them to be reunited," he told reporters in Canberra.

But the prime minister refused to elaborate on the reason for Mr Sigley's detention in the hermit kingdom.

"It is in nobody's interests in these quite sensitive consular cases, to go beyond simply saying, I'm so pleased that he is safe and I'm so pleased he's been reunited with his family," Mr Morrison said.

Swedish Foreign Minister Margot Wallstrom said she was relieved the situation was resolved.

"Happy for the release of Australian citizen Alek Sigley today!" she tweeted.

"Sweden has done its utmost to work for Mr Sigley under our bilateral agreement with Australia."

Australia does not have an embassy in North Korea, so asked Sweden's delegates in Pyongyang to meet with North Korean officials on Wednesday to raise Mr Sigley's disappearance.

The Perth man was then released on Thursday morning.

Mr Sigley, who runs the Tongil Tours tour company and had been studying in Pyongyang, was detained in North Korea last week.

He was last heard from on June 25 and had since fallen silent on social media.

His father Gary Sigley said the family is "over the moon" that Alek is safe.

"He is fine, he is in very good spirits, he's been treated well," he told reporters at home in Perth.

He said he hoped to see his son in Australia soon but did not know whether he would return to North Korea.

"At this stage I have no idea what is travel plans are," he said.

He admitted the family had been anxious since Alek's disappearance.

"The last week has been a very difficult week for Alek's immediate family, we were very worried when we didn't have any news about his situation," he said.

"We are just so happy now that the situation has been resolved and we know he is safe and sound in Beijing and in the care of the Australian Embassy.

"It is also good to know that he has been in constant good spirits and been well the whole time."

He thanked the Australian and Swedish governments for their "stellar work."

"And also those working in the background, the silent heroes who helped bring this about."

Mr Sigley grew up in Perth with his father, an Asian Studies academic, and his Chinese-born mother.

He studied at the ANU in Canberra and then in Beijing, Shanghai and Seoul and is fluent in Mandarin and Korean, as well as speaking some Japanese.

He started a Masters degree in Korean literature at Kim Il Sung University in Pyongyang in 2018 after first visiting North Korea in 2012.

Mr Sigley's is the first known arrest of a foreigner in North Korea since American student Otto Warmbier, who was sentenced to 15 years hard labour for allegedly stealing a propaganda poster in 2015.

Mr Warmbier was repatriated to the US in a coma a year-and-a-half later, and died six days after his return.

When a 12-year-old girl turned up at a Victorian hospital emergency department after trying to self-harm and talking about hurting her family, she was turned away.

Now 16, the girl has been diagnosed with conditions including borderline personality disorder and her mother says the mental health system is "shockingly inadequate" and has repeatedly failed them.

"Myself and my daughter have put our hand up for help so many times and we have not received it," the mother, who asked not to be identified, told Victoria's royal commission into the mental health system on Thursday.

From the age of about nine, her daughter began suffering panic attacks during which she felt like she was losing touch with reality.

"She was not feeling like she was in the world, that the world was black and white, that her brain needed to be taken out and washed," her mother said.

The girl's mental health continued to spiral out of control and the pair often spent a long time waiting in hospital only to be sent home with virtually no support.

"It really did feel like we were being pushed to the bottom and people were coming in with minor injuries and being seen before us," her mother said.

The girl ended up dropping out of school and using drugs, and was placed in residential care in Melbourne but often slept on the streets, where she suffered further trauma.

"I didn't feel like anyone was listening," the woman said of her repeated attempts to get help for her child.

"We've been told to hide the knives and things like that and she's been sent home (from hospital)."

When the teenager was eventually admitted, she was placed in a locked psychiatric ward where she felt like "a caged animal".

It took about seven years to find treatment that helped, with the girl's mother suffering breakdowns from the stress.

"I was so worried my daughter was going to kill herself," the woman said.

She wants families to have more support so they can intervene before they end up in the emergency department.

The head of mental health charity Beyond Blue, Georgie Harman, has told the commission the system needs lasting reform going beyond short-term funding and election cycles.

"Let's let this thing survive the slings and arrows of electoral cycles, because people and their families have been asking for this for a long time," she said.

Psychiatrist and former Australian of the Year Patrick McGorry is expected to give evidence at the commission on Friday.

4. "The most absurd thing". Putin denies interfering in the US election.

Russia has never interfered in the internal affairs of other countries and has no intention to do so, President Vladimir Putin says in an interview published in Italy.

Speaking to the Corriere della Sera newspaper ahead of Thursday meetings with Pope Francis and Italian leaders, Putin rejected recent accusations of Russian meddling in US and European elections.

"The most absurd thing was the accusation that Russia interfered in the American elections," he said, arguing that the US federal inquiry led by Special Counsel Robert Mueller "failed to gather concrete evidence simply because nothing had happened."

Last week, US President Donald Trump also appeared to ridicule the issue when he met Putin at the G20 summit in Osaka, Japan.

Asked by a journalist, Trump mockingly wagged a finger towards his Russian counterpart and, with a smirk, told him: "Don't meddle in the election."

Mueller's investigation has concluded that Russian agents interfered to help Trump win the 2016 US presidential elections, but said there was not enough evidence to establish active collusion between the Trump campaign and Russia.

"I want to make this very clear: we have not interfered and do not intend to interfere in the internal affairs of either EU member states or any other states," he said.

"This is what sets us apart from the US and a number of their allies who, for example, supported the coup in Ukraine in February 2014," he concluded.

Tonight the Parliament voted to reward the aspirations of hard-working Australians. Australians voiced their loud and clear support for our comprehensive tax package. They supported a tax system that rewards aspiration and encourages effort, and today we have delivered it. pic.twitter.com/LOIf7FePis

In the first week of sitting since the coalition was re-elected in May, the government secured crossbench support in the Senate for the three-stage plan on Thursday evening.