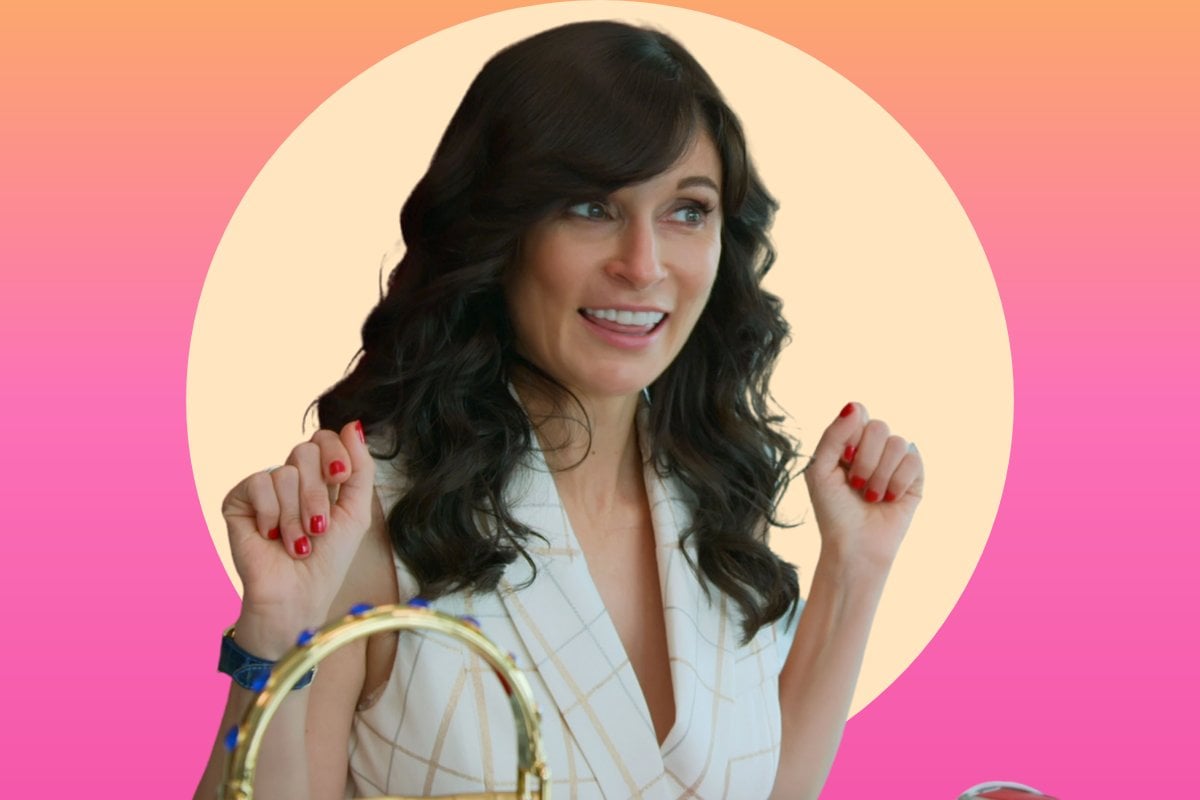 As the CEO of Elite World Group, the world's largest modelling network, Julia Haart is one of the most influential names in the fashion world.

But just eight years ago, Haart was living a wildly different life.

Watch the trailer for Netflix's My Unorthodox Life below. Post continues after video.

After moving to the United States from Russia as a child, Haart grew up and lived in the ultra-Orthodox Jewish community of 'Yeshivishe Heimishe' in Monsey, New York.

It was a strict lifestyle that didn't allow Haart to wear pants or drive a car, let alone spearhead a fashion and modelling empire.

While living in the community, Haart married her first husband, Yosef Hendler, at 19 years old. Together, they had four children.

It was Haart's third child, Miriam, who ultimately inspired her to leave her life in the strict community and start over.

"Miriam just didn't fit in. I watched them trying to mould her and twist her and make her into this obedient, quiet, meek woman and I just couldn't do it. And so I picked up my stuff and walked out the door," she told Bonni Laufer Krebs during an interview.

Now, after completely upending her life in Monsey, Haart is a very different person to who she was just a decade ago.

Netflix's new reality show, My Unorthodox Life, follows Haart and her children as they continue to navigate their old lives and their new lives.

As the reality show gains traction, here's what you need to know about the main cast, including where to follow them on Instagram.

After leaving her community in Monsey at 42 years old, Haart launched her career in the fashion industry by starting her own namesake shoe line.

Within a year, the shoes were being sold in seven countries. That soon grew to 17 countries.

In 2016, she joined Italian luxury house La Perla as Creative Director where she met her second husband, Italian entrepreneur Silvio Scaglia. He brought her on as a co-owner and chief executive of Elite World Group, where she has since also started her own in-house fashion brand e1972.

Before My Unorthodox Life was filmed in February 2020, Haart largely kept her strict orthodox past secret.

But through the Netflix series and her upcoming memoir, Haart is now sharing her story.

"Until I became creative director of La Perla, I didn’t tell a single soul anything about my past," Haart said, according to Esquire.

"Zero. Like, if guys would ask about my past, I would literally make sh*t up. I didn’t want people to know my story. I didn’t want to be a victim. But after my first collection, I thought, I’ve accomplished a little something. I had come to a place of personal comfort. And I hoped that someone would watch this and say, okay, if this crazy bitch did it, I can do it."

During that time period, Batsheva didn't have a relationship with her mother as she felt abandoned.

However, she later gained an understanding of Haart's desire to start a new life.

The model and influencer currently has more than 1.3 million followers on TikTok.

A post shared by My Unorthodox Life- Batsheva (@batshevahaart)

The couple were reportedly married on October 17, 2012.

As of 2021, Benn is working as a licenced real estate broker in New York City.

As seen in My Unorthodox Life, Benn has struggled with some of the aspects of his new life outside of his Orthodox upbringing, including his wife's decision to wear pants.

After Haart left Yeshivishe Heimishe, Shlomo began questioning some of the community's orthodox practices and later decided to leave Monsey.

As seen in My Unorthodox Life, Shlomo is also dipping his toe into the dating world for the first time.

As seen in the show, Miriam was largely behind Haart's decision to leave her old life behind.

The 21-year-old, who recently came out as bisexual, is attending university at Stanford.

She also has a passion for building apps that empower women.

"I'm just trying to be myself. That to me is what I fought with my mum to do," she shared in the new Netflix series.

A post shared by Miriam | My Unorthodox Life (@miriamhaart)

Aron currently divides his time between his father's home in Monsey and his mother's penthouse in Tribeca.

Despite his family's more modern approach to life, Aron is still deeply connected to his ultra-Orthodox community.

Robert Brotherton is the fan favourite in My Unorthodox Life.

Brotherton, who works as the Chief Operating Officer at Elite World Group, is a longtime colleague and friend of Haart.

While the series doesn't delve much into Brotherton's personal life, the show did follow his search for his birth mother.

My Unorthodox Life is available to watch on Netflix now.