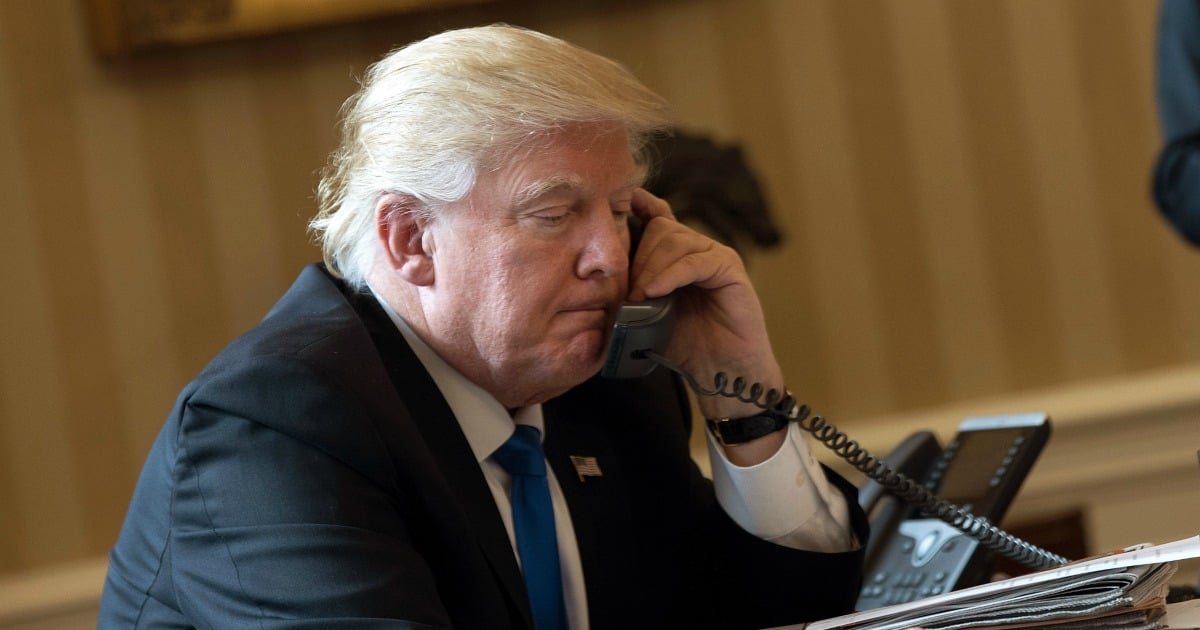 Don’t worry Malcolm, I know how you feel. My phone call with The Donald ended with him threatening to sue me.

I was a reporter for Seven’s Today Tonight at the time, circa 2008, and we’d heard of an enterprising young businessman in Ipswich who’d convinced Donald Trump to come to Australia on a speaking tour.

Yep, Malcolm Quinn had read one of The Donald’s books of business inspiration.

Given what we now know, who knows if Donald ever wrote a single word of it, but it was enough to convince the boy from Ipswich to take a bite at getting the Big Apple’s biggest ego, now POTUS, to come to Australia on a speaking tour.

And guess what — The Donald said yes. What a top bloke, we thought. My boss knew we’d be on a winner if we could take Malcolm to New York to meet his hero and future guest speaker.

So, Seven stumped up the cash and we set off to meet Donald — with Malcolm in the middle.

We passed many expensive cars in the basement of Trump Tower, I can’t remember makes and models but think Rolls Royce Phantom etc, and ascended to the top — of course.

And there was Donald in a suitably oversized and over the top office, surrounded with sporting memorabilia and the signatures of famous people on baseballs, golf balls, NFL footballs etc.

The story went off without a hitch. Well, largely — Donald was a bit “pissed” when I asked him to re-do his walk down a corridor three times.

Billionaires never really get the need for cutaways. Even if they do work in TV.

Back home we broadcast our story on Donald — the billionaire who gave the little guy from Australia a break by agreeing magnanimously to come down under for a speaking tour.

Malcolm was also overjoyed with the publicity the story would provide for his upcoming tour with Donald.

There was one problem Malcolm didn’t bank on. Back in 2008, Mr Trump was so unpopular/unknown, Malcolm told us he couldn’t offload the tickets for the event.

It gets worse. Malcolm, a small businessman from Ipswich who had a wife and kids, said he had mortgaged his home to provide Donald with a $1 million advance for the Aussie tour.

This was terrible news for Malcolm as he stood to lose his house, not to mention the stress on his family.

Mr Trump hadn’t lifted a finger, surely the billionaire would return the money? Nope. Donald refused to help Malcolm out — and so began the makings of a second Today Tonight story. Mr Trump isn’t a top bloke after all.

Prior to filming, we contacted Mr Trump’s office for an interview and to suggest he give Malcolm his money back.

After all, in Donald’s (ghost written?) book that inspired Malcolm, he talks of the need for generosity in business, like when the banks forgave a mountain of his debt when he hit the skids in the ’90s.

I wasn’t really expecting Mr Trump to call. But we now know, he is one sensitive dude and even a TT journo from Australia can seemingly provoke the ire of a future president.

“Is that James Thomas?”

No joke, the world’s most (soon to be) powerful haircut was on the blower from New York.

The following is not an exact quote but as close as my memory allows. Let’s call it a recollection in line with Mr Trump’s post-fact era.

Mr Trump: I hear you are doing another story on me and Malcolm Quinn.

Me: Yes, we have heard you have $1 million of his money, you have done nothing for it, what’s the harm in just handing it back? He has kids, a mortgage, a wife…

Mr Trump: You know, Malcolm Quinn is a bad businessman, he is a failure, he has failed to sell any tickets… I am not giving him the million dollars back. And you know, one day he will thank me. Because, I am giving him a valuable lesson in business… Business is tough.

Believe it or not, we were actually with Malcolm at the time, filming the second story. Yes, we recorded most of the conversation. And at some point, Donald twigged.

Mr Trump: Are you recording me?

Mr Trump: You can not do that. That is illegal. How dare you.

And then, in a bombast of red faced fury (I imagine), Mr Trump burst down the line with a parting comment.

Mr Trump: I am going to sue you…

Now, I’m not from a Muslim majority country, but let’s just hope POTUS doesn’t have a long memory. Oh and good luck Mr Turnbull, I kind of get what it may have been like!

Unfortunately, I can’t recall if he hung up…

We did broadcast the story on Today Tonight and from memory, parts of the recorded conversation. We have asked our mates at Seven to see if we can find it. Let’s hope my recollection of events is slightly more accurate than the President’s recollection of how many people attended his inauguration.

Malcolm Quinn told the ABC he’d prefer not to comment any further. We’re not sure if he ever got his money back.

Wow. Trump really is a loathsome maggot. It beggars belief that regardless if you are right wing or hard right, that anyone could defend him. ANYone! Politics is one thing. Trump is a grub. How could any right wing person, in good morals and conscience, defend him? I could never do that even if I was hard right and agreed with all his politics and look at myself in the mirror. To do so, would be to sell my Christian morals and my soul.

It's such schoolyard psychology. Jump on board with the bully to get even with the people who disrespect you. Which is why you hear Trump supporters still going on about how "we" won, and the "elites" (aka "people we think look down on us").

I can't defend the man himself, but the president doesn't have to be the best person, they just have to be the one people think will do the most good for the country. With Trump he got a lot of support from the conservatives (no surprises there) and the lower / middle classes when he promised to bring the manufacturing jobs back.
That's obviously distilling something very complicated into a few lines.

Trump supporters say it because so many trump haters are still in denial. It's just a reminder of reality.