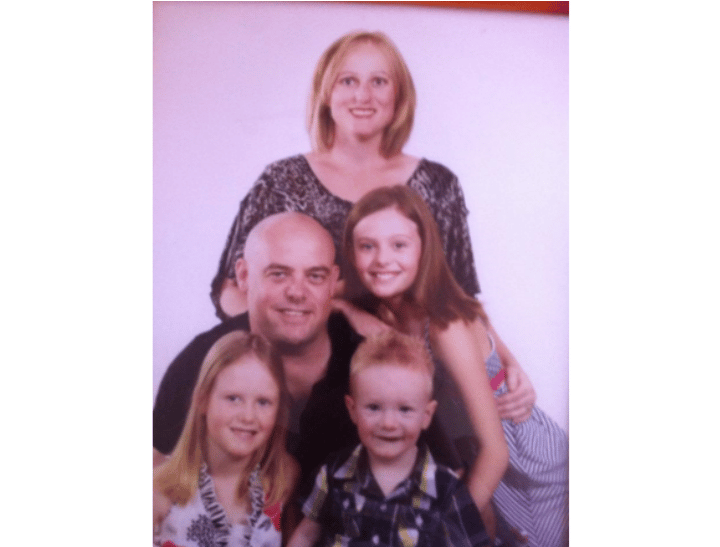 In November last year, my ten-year-old daughter Hayley and I were laughing in the aisles of Toys ‘R’ Us, when all of a sudden she turned ghost white.

By the time we reached the cash register she had collapsed on the floor – a wave of fear and shock gripped me.

In the months leading up to her collapse, Hayley was always thirsty, had lost weight and was regularly having tummy aches. I’d put it down to a growing phase. I wish this had been the case.

I raced her to the medical centre where the doctor told her to rest up and drink water. But I just knew something was seriously wrong. The next day I took her to my doctor. The look in the doctor’s eyes confirmed this was serious. After a urine and finger prick test, Hayley was diagnosed with type 1 diabetes. My heart sank, and an element of guilt washed over me. Looking back, we had no idea just how much this would change our lives forever.

Type 1 diabetes is a life-long autoimmune disease where the pancreas is unable to produce insulin, or very much of it. If left untreated, type 1 diabetes is fatal and the cause still remains a mystery.

A personal account- A day in the life of a Type 1 diabetic:

Many people don’t realise that having children with type 1 diabetes changes the lives of everyone close to them. Since Hayley’s diagnosis we juggle trying to lead a normal life between finger pricks and constant monitoring. For the time being Hayley can’t be on her own – which means carefully balancing and planning every single aspect of our lives.

Spontaneity is now extinct in our world! We meticulously plan our days and, if something unexpected arises, things go from hard to almost impossible.

But in all this craziness I know I’m lucky because of the unwavering support from my good friend Nicole. Her son Eric attends the same school as Hayley and we met through play group. Nicole’s been there for us from the start. She’s been my rock, a constant shoulder to lean on and a trusted ear to confide in.

But in a cruel turn, just six months after Hayley’s diagnosis, it was Nicole who needed me more than ever. In April this year, Nicole’s son Eric was showing the same signs as Hayley. His constant thirst, hunger and extreme weight loss were no longer symptoms to Nicole and myself – they were a diagnosis. I helped Nicole pack an overnight bag for the hospital and prepare for the news.

After all the 3am teary phone calls I was now the pillar to lean on. I’d been there and knew exactly the path Nicole and Eric were about to tread. While I had my own challenges to overcome with my family, I still went home after Eric’s diagnosis and cried for my friend and her son. I knew their lives would never be the same, much like my family’s never will be.

Many parents of children with type 1 diabetes are often alone in their struggle, as the attention is always on the child.

For many parents it’s a constant battle to create a somewhat ‘normal’ life for their children. Describing that to other people can be one of the hardest parts.

I’m lucky that Nicole and I only need to look into each other’s eyes and we get it; we understand each other without having to say a word.

On November 15th, we will be walking in the JDRF One Walk at Parramatta, and hopefully help in finding a cure for this disease.

Type 1 diabetes affects more than 120,000 Australians, with approximately 1,825 new diagnoses each year. To join us in walking for a cure, or donate to JDRF, please head to: walk.jdrf.org.au/

I think it's wonderful that there are so many amazing parents out there doing so much for their type 1 children. Ultimately, it's your attitude towards the disease that will shape how your child views it and deals with it.
My parents saw my diagnosis at 8, as a curse. My siblings blamed me for the changes to our diets and lifestyle. I've hated myself and blamed myself for my ill-health my entire diabetic life. And the fact that diabetes goes hand in hand with so many other autoimmune diseases has caused me to live less than a half life. I'm sick all the time. My diabetes is very fragile. It DOES rule my life. There is no holiday or break from it. You can't escape. Everything I do has to be taken into consideration. But no one can see it. Everyone here is posting about how well they're doing with their diabetes. And that's brilliant. But I'm not. I'm the other side of the disease. I'm the burnt out, tired of fighting my own body every day, losing a battle I can't possibly win, side that no one is comfortable talking about. I'm the chronically depressed about her inability to function as a normal human being side, that all of the promo stuff doesn't show. I'm not ok. And I blame diabetes.
I'm not going to pretend for the public that my diabetes doesn't stop me, because it does. It has stopped me for over 30years.
I would honestly rather have cancer than this nightmare.
I'm sorry for my negative post, but as I said, there is more than one side to this disease. I just hope they find a cure before any of your children get the chance to become as bitter and depressed as I am.

A
Alex Williams 6 years ago

Yes, a diagnosis of T1D changes everything, just as all of the previous comments have said. It is 24x7, affects the whole family whether we like it or not and, unfortunately, can also be very dangerous. However with a lot of work, focus and dedication it is still possible to live a full life. I'm currently posting a story about an adventure I had walking across the Sahara desert, one chapter at a time. The first chapter starts with my diagnosis at the age of 17, back in 1974. The story progresses through the trials and tribulations of coming to terms with T1D and then the hard work required to prepare to walk across the Sahara. It's an easy read, so I hope that anyone who is new to the world of T1D takes the time, so they can see that it is possible to live a full life - https://alexofoz.wordpress....