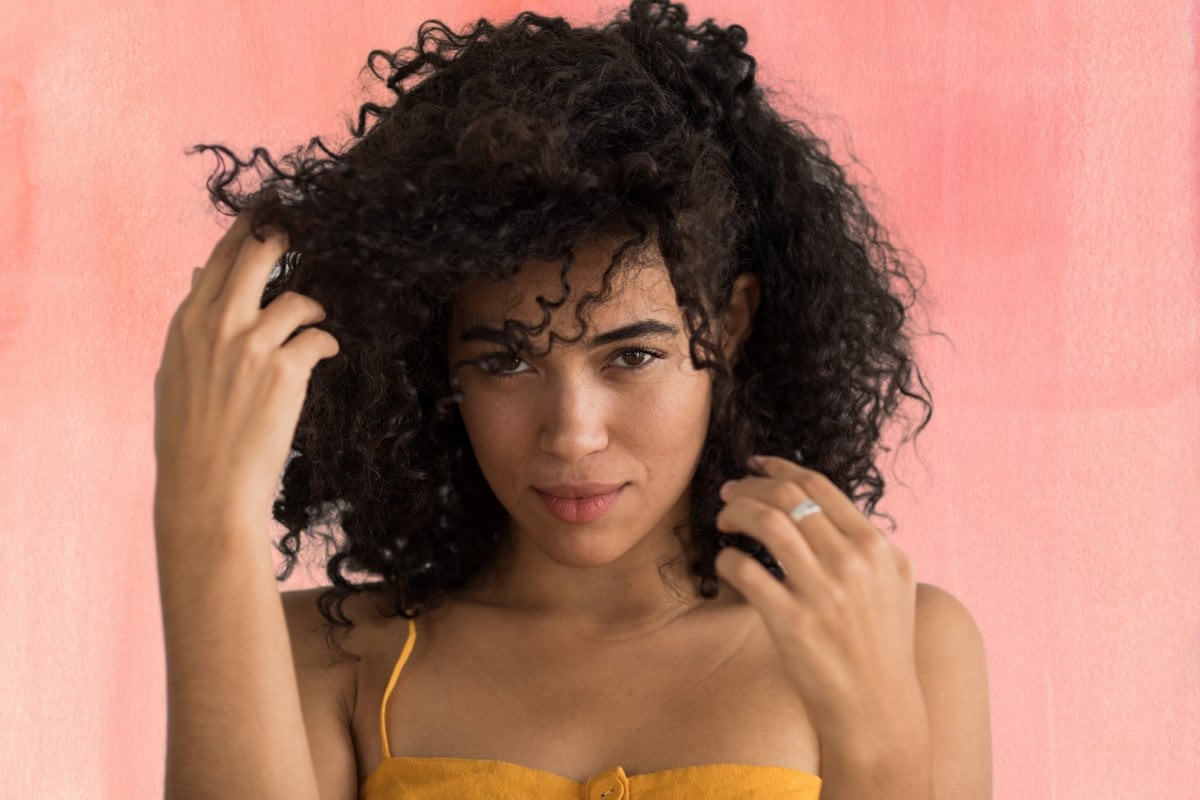 "I think you would look even more beautiful with straight hair."

The statement was not unfamiliar. I had heard the same from friends, family, hairstylists, and random strangers throughout my life. They would look at my thick black curly hair in wonder.

The first question would always be if I had treated my hair to create the curls. The next would be if I had ever tried to straighten it. I would patiently explain I liked it the way it was — curly, coily, and wild.

The last person I expected this statement from was my boyfriend.

Side note: Here are some very interesting facts about body hair. Post continues below.

"Why don’t you straighten it permanently?" he asked casually one day. "I bet it would look awesome."

"Yes, and then my dad will bury me alive." I laughed.

Growing up, I had waist-length hair that was extremely dense and frizzy. And I hated it.

I rocked the same hairstyle throughout highschool. Hair lathered in coconut oil and tamed into a single thick plait — the only hairstyle that didn’t make me look like Simba.

Detangling was a wrestling match in which the hair emerged victorious every time (the number of brushes the angry beast had trapped and snapped into two is uncountable).

My hair has a mind of its own, I used to joke with my friends.

The only person who loved the monster was my father. He would patiently oil and brush it out while I whined as he tugged at the tangles.

He was the only reason I had never owned a straightener (I did use an iron box once, but it had no effect). He was against it. He loved the beast (as I called it), even though none of us knew how to take care of it.

Just before I went to college, I cut it to my shoulders. New place, new me.

That was when I saw strangers on the Internet rocking their natural curls (thank you, YouTube) — shiny, defined, perfect ringlets. Right then, I knew I could love mine too. All it needed was the right care, a truckload of patience, and a handful of products.

A few months later, my hair had transformed from a frizzy mess to beautiful coils. People looked at it in awe.

Strangers stopped me on the streets to ask me if it was natural. Drunk girls in the bathrooms of clubs fawned over it. The beast was an attention grabber.

In a place filled with straight and straightened hair, mine stood out in defiance.

It soon became my identity. Everyone in college knew me as the girl with the curly hair.

The ugly duckling had turned into a swan.

"Imagine how nice it would feel."

It wasn’t the first time he had asked me to do it.

"Imagine how nice it would feel. You would look way prettier too. It’s not a big deal... even my mum has done it, and she loves it. You will too."

Will I? My mind questioned.

"That would feel nice," I heard myself say.

But I still wasn’t ready.

My boyfriend didn’t give up. He brought it up every chance he could.

His innocent suggestions got stronger over time. Straighten your hair, lose some weight, ditch the dorky glasses — it sounded simple enough. But that tiny niggle in my mind wouldn’t go away. Something about it felt wrong, but I couldn’t put my finger on it.

I couldn’t deny the fact that I was intrigued and a little nervous. There was no chance in hell I was going to permanently change my hair.

The beast had become my identity. It was a part of me.

Getting rid of it, no matter how appealing straight locks looked, seemed like the wrong thing to do.

But I was open to trying it out.

Pleasing him only cost me a month's earnings.

Finally, deciding to take the plunge, I shopped online for a decent straightener that wouldn’t fry my hair. I wanted to do something new, knowing I could easily get back to being myself.

Get back to being myself. This thought aroused an uneasy feeling, but I ignored it.

After weeks of contemplation, I settled on a well-known brand — a straightening brush unlike anything I had seen before, that promised to give me the tresses of my dreams without damaging it.

But were they the locks of my dreams or his? I didn’t know anymore.

And I was going to spend it on this gadget that would make me more attractive. Or so I thought.

In three hours, I turned into his ideal girlfriend.

I was at his place when the brush arrived. Unboxing it, I felt my stomach doing nervous flips. There it was, a black and purple hairbrush — the beauty tool I had wanted since I knew what straightening meant.

As I admired the sleek design, my heart sank. I knew I wouldn’t be using it. I had justified spending an exorbitant amount of money on it with reasons like 'You always wanted straight hair!' and 'He will love it' but holding it in my hands, I wasn’t sure.

Plugging it in, I slowly took one curl clump and brushed. As it combed through, my hair turned sleek and straight — the kind I had always wanted. It took three painstaking hours and tired arms to get my entire head done.

It felt nice. It felt more than nice; it felt amazing.

My hair felt silky soft as I run my fingers through it. No frizz, no tangles, no flyaways, no curls — just perfect shiny hair. Or was it?

The excitement of having straight hair only lasted for some time.

When my boyfriend got back, I was done up for our night out, straight hair, red dress, and heels. As I expected, he was pleased.

I gave in, but my hair didn’t.

Being the people pleaser I was, I had given in to his desire to see me with straight hair. It made him happy, and that made me happy.

But my hair had other plans.

One hour later, the beast had woken up again. My hair was starting to get frizzy and unruly. No amount of serum could get it under control. Throughout the night, I felt awkward.

I worried if my hair looked okay. I wondered if I looked funny with the frizzy mess on top of my head. I had gotten so used to having my hair look its best in its natural state that having straight hair felt uncomfortable.

"See, I told you it would look good. You should get the treatment done," he said, oblivious to my discomfort.

"Yeah, I don’t think that’s going to happen," I said, the music drowning out my voice.

By the time I got back, my hair was a hot mess. I washed it the next day, watching the straw-like hair transform into delicate curls with some water and conditioner.

I had already decided I would never touch that brush again.

I tried to please him, and I failed.

What was I thinking anyway? That changing my identity was going to be okay as long as he was happy? But if he loved me, why would he ask me to change?

Months later, after we had broken up and the veil of love had been lifted, I thought about all the little remarks he used to give. The hair was just one of them.

There was 'You need to workout more' and 'Concentrate on your arms and back'. Sometimes it was suggesting to buy a dress too short or tight for my comfort, or it was reprimanding me for eating too many chips.

"He wants me to look my best," I thought as he reminded me to put in more effort even at the expense of my comfort.

The criticisms had stung, and my people-pleaser mode had kicked in. Even though working out and eating clean had been good for me, I was doing it not for myself but someone else. That made it feel like a chore.

But all my efforts to please didn’t stop him from choosing someone else over me.

While I could have brushed aside everything else, my hair was a deal-breaker.

It was who I was.

It was a part of me I had spent a lifetime learning to love. Changing it meant altering an integral part of me. I had realised when I stood in front of the mirror, admiring my sleek hair, but missed the unruly curls.

I had felt like he wanted me to be something else, someone else. When I caught him cheating, I thought maybe it was her that he wanted me to be. Or maybe, it was his idea of a perfect girlfriend. Whatever it was, it was not me.

Here’s something I learned months later — bending over backward for someone is not going to keep a person who doesn’t want to be kept.

A lot of us try to do things to keep the one we want interested in us. We remain available at all times, shift our plans for them, have sex, and overextend ourselves to not lose what we have. Unfortunately, none of these work unless the other person wants to be with you.

Another nugget of wisdom I gained during the aftermath of my breakup was if they loved you, they wouldn’t ask you to change something fundamental to who you are as a person.

Changing yourself for someone else doesn’t work either. I tried, and it caused a great deal of disappointment in myself.

The brush is now tucked away in my wardrobe, a reminder of what I would never do again — change myself for someone else.

Eshal Rose is a dentist by profession and a writer by passion. Her work is available on Medium, where she publishes content regularly and is a Top Writer in various categories.