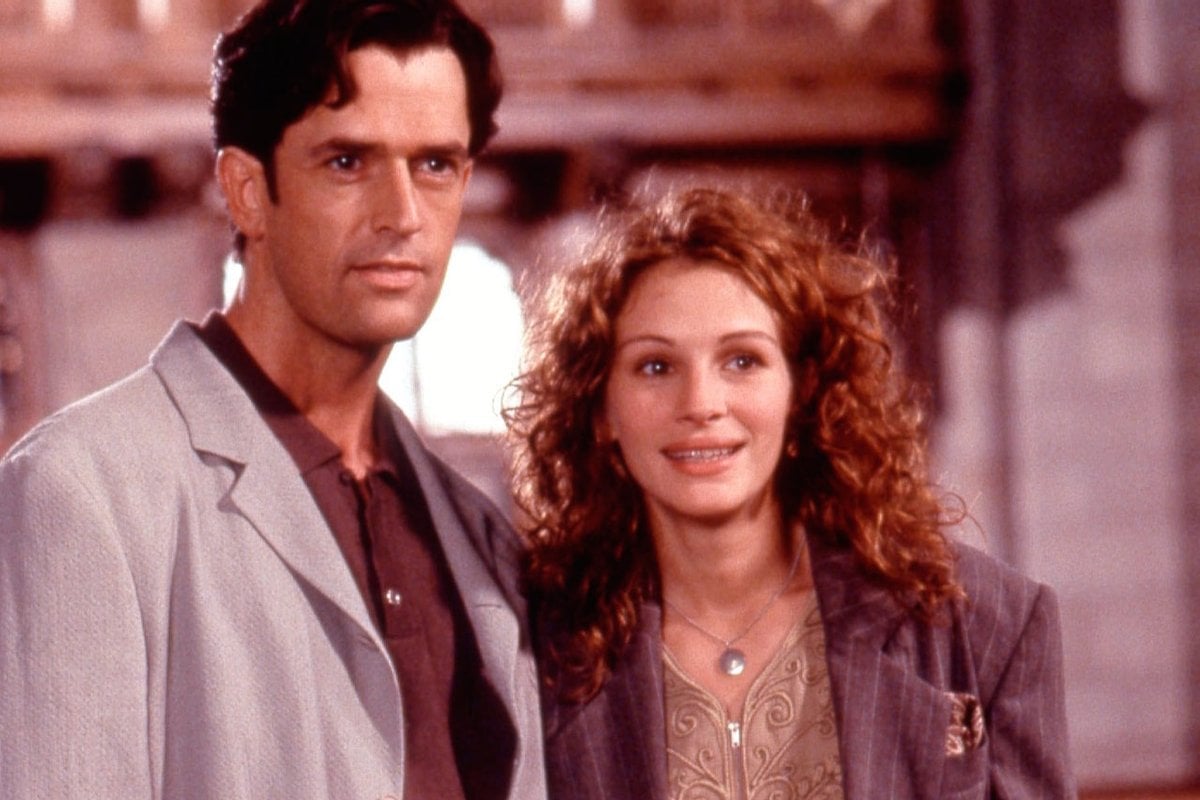 My Best Friend’s Wedding could have been one of the biggest turkeys ever made. A movie where the characters keep breaking into song, not always tunefully? A rom-com where the central character does really horrible things? A big-budget American film directed by a much-loved Aussie director, P.J. Hogan, fresh from Muriel’s Wedding?

And yet it was a massive hit, with a box office of just under $US300 million from a $US38 million budget. It made Cameron Diaz and Rupert Everett into huge stars. Watching it now, nearly 25 years after its 1997 release, it’s just as delicious as ever.

Here are 11 things you may not know about the movie.

The movie was inspired by a true story.

Screenwriter Ron Bass says his agent told him about a woman who found out about an old boyfriend's marriage and immediately knew she shouldn't have let him go.

Having just been to a four-day-long society wedding in Chicago, he realised that would make a great setting for a rom-com.

“And that was the birth of the movie," he told E!.

The ending was originally very different.

As fans know, Julianne (Julia Roberts) spends the movie trying to break up her best friend Michael (Dermot Mulroney) and his fiancée Kimmy (Cameron Diaz), but she fails and finishes up single, dancing with her gay friend George (Rupert Everett) at the reception. Originally, the movie ended with Julianne meeting a new guy, played by Sex And The City’s John Corbett. But test audiences hated her finding happiness.

So eight months after the end of the shoot, Hogan reshot the final scene and shot a few extra scenes featuring Julianne and George, to make the character more likeable. Roberts had to wear a wig over her pixie cut.

Diaz was genuinely terrified in the karaoke bar scene.

It’s one of the movie’s most touching moments, where Kimmy, clearly very uncomfortable with singing, performs the Burt Bacharach/Hal David classic “I Just Don’t Know What To Do With Myself”.

Hogan let Diaz think she would be lip-synching, then got her to sing live.

“I allowed the true terror of singing in front of people to be alive in me,” Diaz told EW. “I wanted to run and hide, and Dermot kept me there. He said, ‘You can do it, you can do it.’”

The iconic scene in the seafood restaurant where George bursts into song wasn’t in the script.

Hogan told EW he added it because he wanted to give George a bigger role.

“I was talking with my wife [director Jocelyn Moorhouse] and I just said, ‘What if he was to lead a big singalong — what would be a song that everybody knows?’”

Hogan decided on "I Say a Little Prayer" and the rest is history.

Preston, who went on to True Blood and The Good Wife, told MTV that the role was her first big paycheque.

“The first things I bought were just nice clothes, because I had been walking around in college clothes, and I really needed to, you know, not do that.”

Other future stars who had small roles in the movie were Christopher Masterson, as Michael’s younger brother, who went on to Malcolm In The Middle, and Paul Giamatti, as a hotel bellman.

Only one other actress could have played Julianne: Sandra Bullock.

Although there’s a story going around that Sarah Jessica Parker knocked back the role, Bass told E! that Roberts was attached from the beginning.

“The only person the other offer was for, and I'm not sure if she even knew about it, was Sandra Bullock. She's probably the only other actress in the world besides Julia who would have been fabulous for that role.”

The indie singer-songwriter does a cover of “Wishin’ and Hopin’”.

“I guess the irony appealed to my sick sense of humour,” DiFranco told the Los Angeles Times.

In fact, she was supposed to appear in the opening credits.

“P.J. wanted me to play the bride in that, which would have been fun with my blue, spiky hair. Unfortunately, the timing didn’t work out.”

Dermot Mulroney has always been keen to make a sequel.

He met Roberts for the first time when he was auditioning for the role of Michael, and they’ve been good friends in real life ever since, acting together in the movie August: Osage County and the thriller series Homecoming.

There nearly was a sequel, but it would have been centred on George.

“I remember talking to Julia about it,” Hogan told EW. “It was something about Rupert was going to get married and she was going to break up their wedding.”

There was a musical, but COVID killed it.

After writing a pilot script for a TV series based on My Best Friend’s Wedding, which never got made, Bass co-wrote the script for a stage musical, featuring the songs of Bacharach/David.

It was set to open in the UK in September 2020, with British X Factor winner Alexandra Burke starring as Julianne, but then COVID came along.

Cameron Diaz’s sister-in-law, Nicole Richie, is “obsessed” with the movie.

Diaz told EW that when she and Richie went to Chicago together, Richie took her to every single location.

“She's like, ‘Remember when you were walking down the street right here and then…’ It was so much fun.