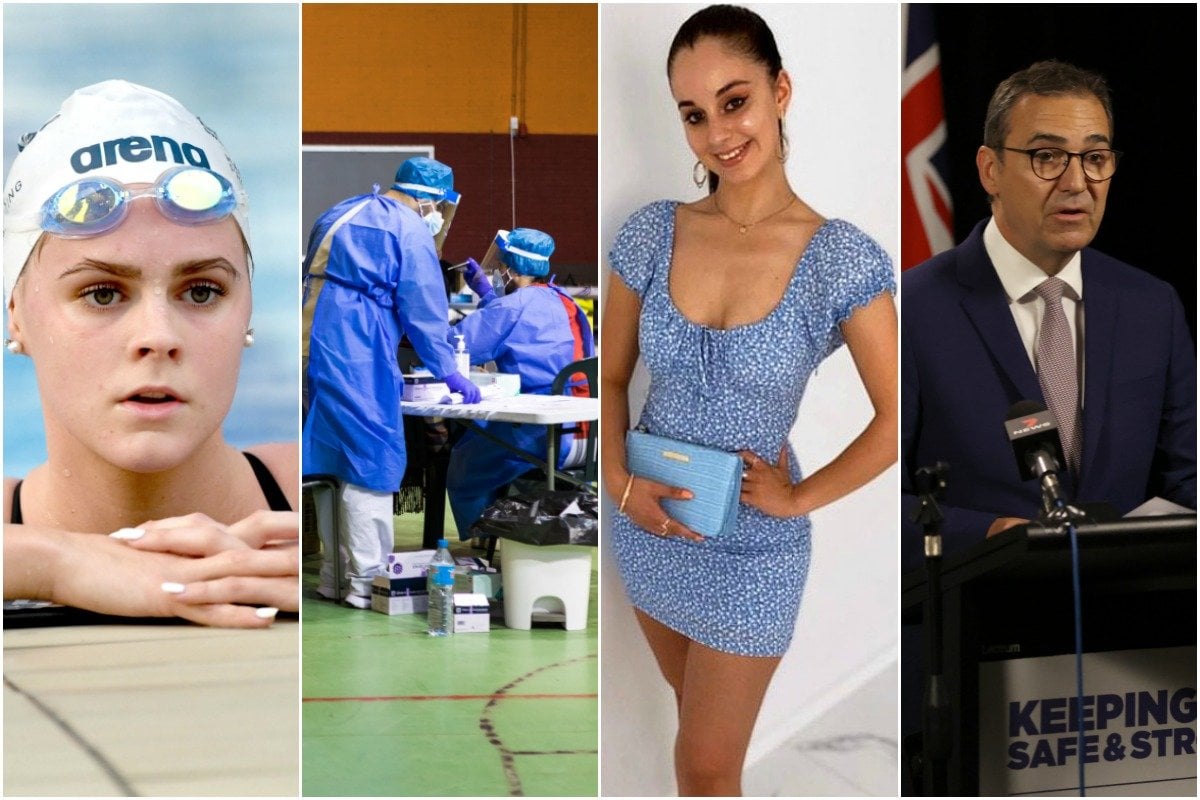 A young woman has been remembered as a "beautiful girl" after her body was discovered at a home in Melbourne's northeast.

The woman, identified as 23-year-old Celeste Manno, was found dead at a property on Umbria Road, Mernda about 4.10am on Monday.

A 35-year-old man, believed to be known to Ms Manno, was arrested and taken to hospital after suffering non-life-threatening injuries.

He was placed under police guard in hospital and a homicide investigation initiated.

Detectives were still at the Mernda house late Monday afternoon as mourners laid bouquets of flowers outside on the nature strip.

Blood and evidence markers were visible on a side tin fence.

At 1:40am on Monday police were called to a home in Balga, WA where they found a 39-year-old woman seriously injured. She died in hospital.

A second woman was taken into custody and charged with murder.

According to Destroy the Joint, these two deaths bring the total number of women killed due to violence in 2020, to 45.

Extra support is at hand and state border closures are re-emerging as South Australia enters a critical phase of containing its coronavirus outbreak.

The latest on the outbreak, 5.00pm and 6.00pm on #9News pic.twitter.com/BwtZOnitnp

South Australia's cluster is at 17, with 15 of those in the same family.

The number doesn't include three children who have tested negative but are being treated as cases because they have symptoms and their parents tested positive.

As of midnight last night gyms, recreational and play centres have been closed, community sport and training cancelled, and caps installed on numbers in hospitality venues, churches and private gatherings.

Victoria - marking 17 days without new infections or deaths - and NSW have increased screening for Adelaide arrivals, while WA has re-introduced its hard border for the state.

Anyone who has recently been in SA will be blocked from entering WA unless they can secure an exemption.

Australian swimmer Shayna Jack has had a four-year doping suspension halved after it was found she did not intentionally use a banned substance.

The Court of Arbitration for Sport (CAS) ruled on Monday that Jack serve a two-year ban after returning a positive sample to Ligandrol.

Jack was originally suspended for a maximum four years despite pleading her innocence during an Australian Sports Anti-Doping Authority hearing.

The 22-year-old returned a positive sample in an out-of-competition test at an Australian team training camp in June 2019 as she prepared for the world championships in South Korea.

In handing down its finding, CAS said Jack did not knowingly take Ligandrol.

Ligandrol is supposed to add muscle mass without the side-effects of steroids.

Jack's ban will be backdated to the start of her provisional suspension from July, 2019 and she can return to competition in July next year.

"I walk a little taller tonight with the fact that this ordeal is finally over.

Sam Burgess' former wife leaked her police statement to a national newspaper to combat the "toxic" covering-up culture of the NRL, a court has heard.

Phoebe Burgess appeared before the Moss Vale Local Court on Monday after allegations her ex-husband threatened her father in his NSW Southern Highlands home in October 2019.

Burgess' lawyer Phillip Boulten SC has accused his former wife of trying to destroy his reputation following the publication of an explosive front-page article in The Australian.

But Ms Burgess said journalists approached her about rumours, and she handed over a document prepared for her lawyer "instead of covering it up, which is so typical of the system I was part of, that I believe is toxic within the NRL".

Former South Sydney captain Burgess, 31, has pleaded not guilty to stalking or intimidating with the intention to cause fear or physical harm.

The hearing is expected to continue early next year.

US President Donald Trump's national security adviser Robert O'Brien says he will ensure a professional transition to the team led by Democrat Joe Biden if Biden is deemed the winner of the 2020 presidential election, and "obviously things look like that now".

The Republican Trump has insisted the November 3 election was "rigged" and that he will be declared the winner after a series of legal challenges in several US states.

Speaking to the Global Security Forum, O'Brien said that while he hoped Trump would turn out to have won a second four-year term, he would work with a new administration headed by Biden and his vice presidential running mate Kamala Harris.

"If there is a new administration, look, they deserve some time to come in and implement their policies," O'Brien said.

Trump's campaign has so far failed to produce evidence that could overturn Biden's 306-232 victory over Trump in the state-by-state Electoral College vote.

States face a December 8 "safe harbour" deadline to certify their elections and choose electors who will officially select the new president on December 14.

Trump, however, is still refusing to back down tweeting a consistent stream of misinformation on his Twitter account.

The Radical Left Democrats, working with their partner, the Fake News Media, are trying to STEAL this Election. We won’t let them!

Moderna Inc's experimental vaccine is 94.5 per cent effective in preventing COVID-19 based on interim data from a late-stage trial, the company says, becoming the second US drug-maker to report results that far exceed expectations.

Together with Pfizer Inc's vaccine, which is also more than 90 per cent effective, and pending more safety data and regulatory review, the United States could have two vaccines authorised for emergency use in December with as many as 60 million doses of vaccine available this year.

Next year, the US government could have access to more than 1 billion doses just from the two vaccine makers, more than needed for the country's 330 million residents.

America has now surpassed 11 million coronavirus cases, and one million new infections just in the past week.

WHO concerned at cases in Europe, Americas.

The World Health Organisation says there is no time for complacency in confronting the coronavirus despite positive news about possible vaccines.

"Right now we are extremely concerned by the surge in COVID-19 cases we're seeing in some countries," WHO Director-General Tedros Adhanom Ghebreyesus said in a tweet on Monday.

"Particularly in Europe and the Americas, health workers and health systems are being pushed to the breaking point." 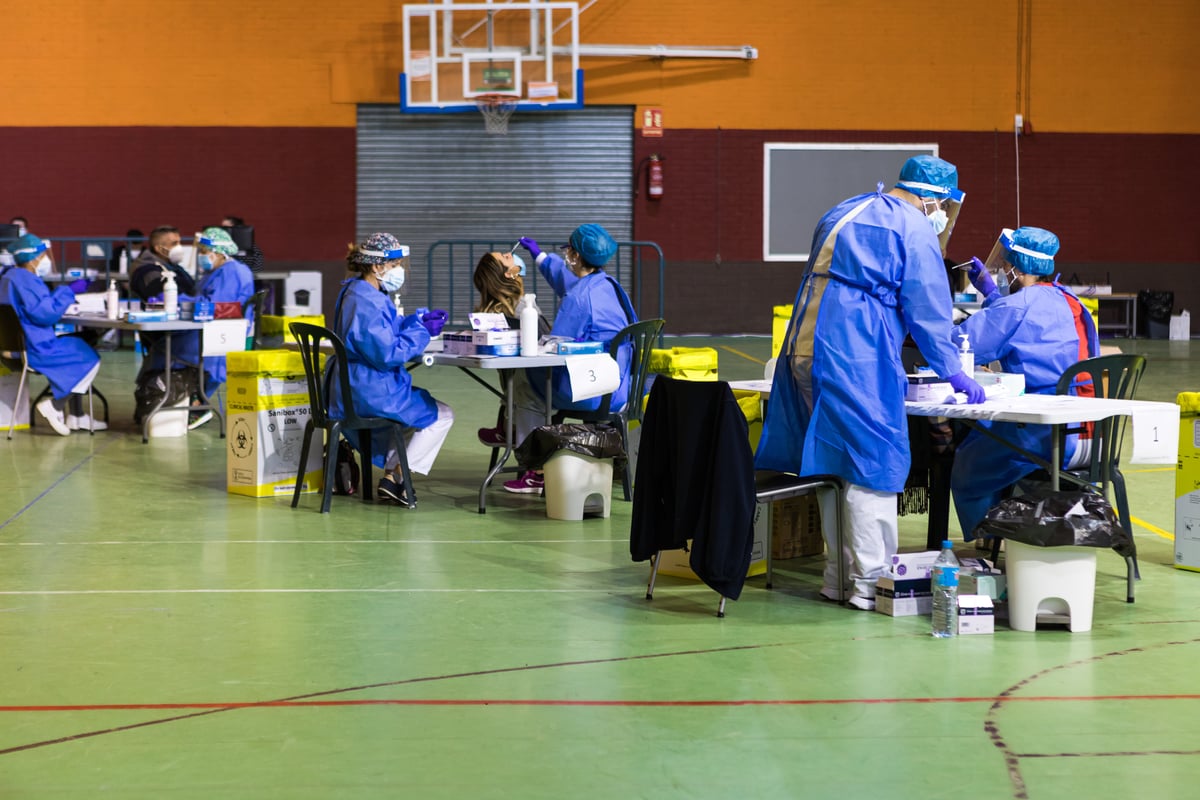 Nurses taking COVID-19 tests in Madrid, Spain. The Madrid town of Alpedrete has been under a local lockdown as a measure to combat COVID-19 since last Monday, and expects to perform more than 15,000 PCR tests. Image: David Benito/Getty Images.

More than 54.44 million people have been reported infected by the coronavirus globally and 1,318,042 have died, according to a Reuters tally.

Infections have been reported in more than 210 countries and territories since the first cases were identified in China in December 2019.

WHO chief scientist Soumya Swaminathan also said on Monday that the news that US pharmaceutical firm Moderna appears to have developed a highly effective vaccine is "quite encouraging" but more data is needed.

Trial participants need to be monitored for two more months for possible side effects, she told a press conference in Geneva.

Australia's female prison population has grown faster in the past decade than that male inmates, a new study shows.

While female prisoners make up about eight per cent of the national jail population, rates of incarceration have risen by 64 per cent from 2009 to 2019. That equates to a shift from about 2100 to 3500 women, the Health and Welfare of Women in Australia's Prison's report released on Tuesday shows.

The growth rate is higher than the male prison population, which has risen by 45 per cent.

The report published by the Australian Institute of Health and Welfare found stark patterns of disadvantage among women who end up behind bars.

Aboriginal and Torres Strait Islanders make up a third of female prisoners. More than half of women entering prison have at least one dependent child, and two thirds start their sentence with a mental health diagnosis.

- An Austrian man, 27, has confessed to abusing 52 minors who he groomed online.

- Prime Minister Boris Johnson says he's "fit as a butcher's dog" during self-isolation after coming into contact with someone with COVID-19. The PM caught the virus in March and ended up in intensive care.

- A push to ban alcohol in Bali has been revived by a number of local political parties which could see people face jail or fines for consuming the substance.