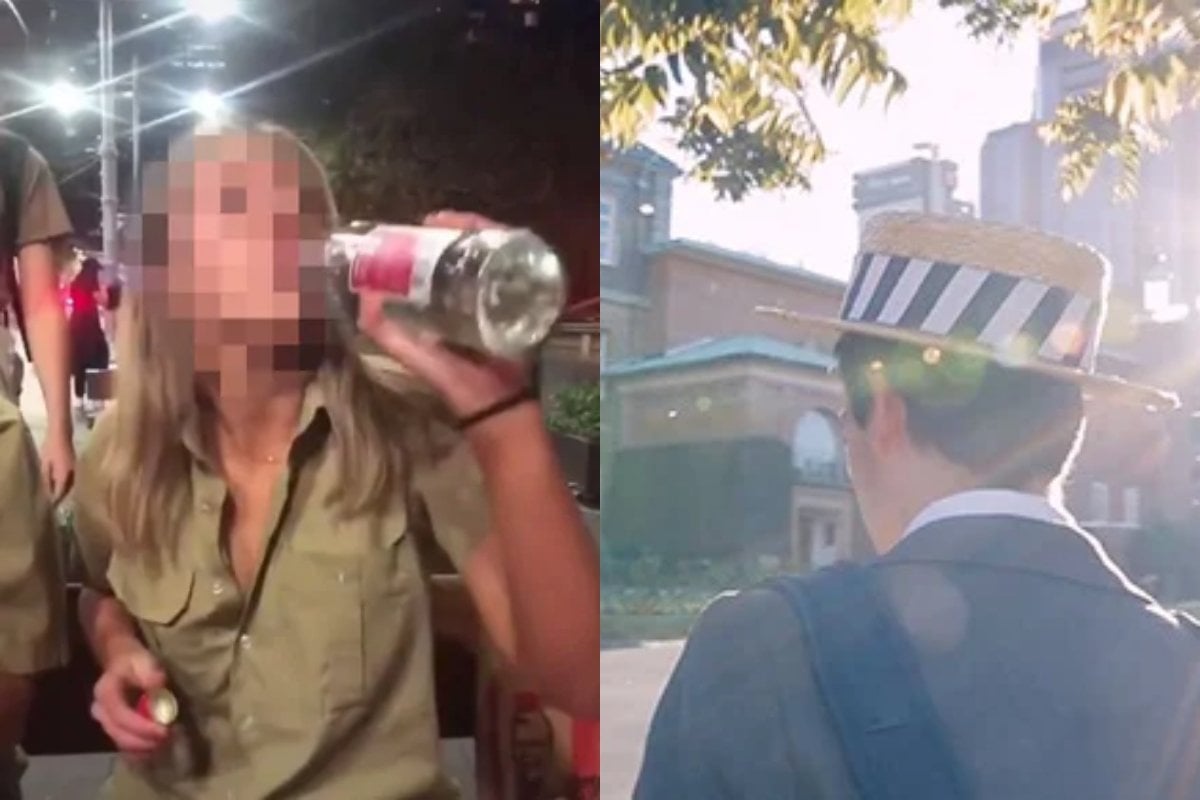 This post deals with child sexual abuse and sexual assault that could be triggering for some readers.

The Shore list included 'sex with a 80kg+ woman', 'spit on homeless man' and 'catch a pigeon and proceed to rip its head off'.

This week, students at Sydney's exclusive Monte Sant' Angelo Mercy College filmed themselves carrying out a series of points on their muck-up day lists and uploaded videos to TikTok.

Included in their list was pee in the aisle of a Woolworths and kissing strangers.

Milson Point's St Aloysius' College Rector Father Ross Jones SJ sent a letter to Year 12 parents last Friday, saying it was "difficult to express the degree of disappointment I feel" after he discovered plans for the school's scavenger hunt.

"In particular, we have been made aware of an overnight competition that invites criminal, manifestly dangerous, and highly offensive behaviours (a number of which are acutely sexist in nature)," Father Jones wrote on September 18, a week before the planned event.

He said if any student engaged in the activities, the College would have no hesitation in contacting the police.

The scandals have not been confined to Sydney.

In Newcastle, a sexual abuse survivor was taunted by a group of schoolboys as part of Merewether High School's muck-up day pranks.

Students at the school were challenged to send an 18-year-old, who did not attend the school, messages "defending pedophiles" to score points.

The teen had confided in one of the boys that she had been abused from age four to 10. He betrayed her trust, turning her trauma into a challenge, the Daily Mail reported.

She received a Facebook message last week from one of the boys saying, "I really think paedophiles aren’t that bad".

"And why do you say that?" she replied.

"Because my uncle was one, and I think he's a good bloke? Is there anything bad about that?" 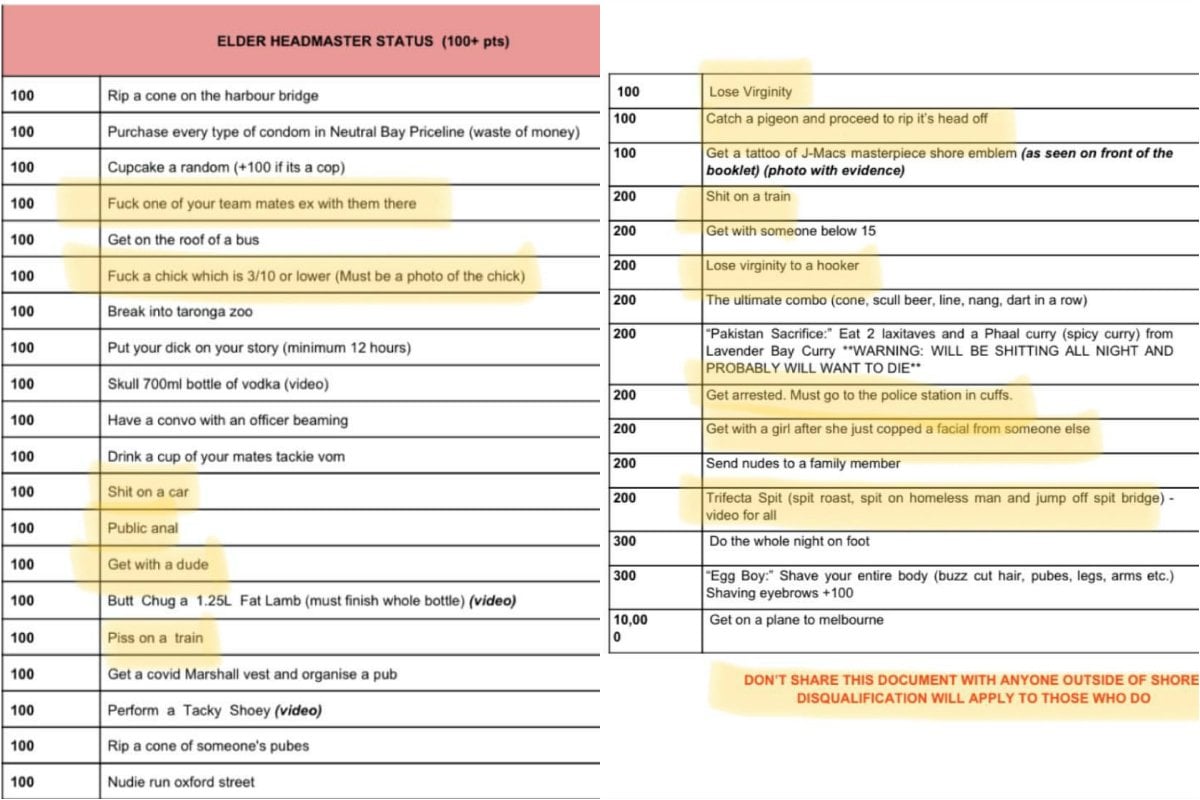 The girl's mother told the Daily Mail her daughter felt "humiliated and exposed" by the 'prank'.

"The boy who created the challenge, she confided in him. She thought he was her friend and instead he's turned her trauma into a joke," the mother said.

Other challenges in the school's hunt included flicking a dog's testicles, filming sex acts and approaching new mother's to say their baby was "ugly".

Parenting author and host of Parental As Anything Maggie Dent told Mamamia's daily news podcast,The Quicky, muck-up days had been around for years, often involving poor decisions such as streaking, graffiti and burnouts. 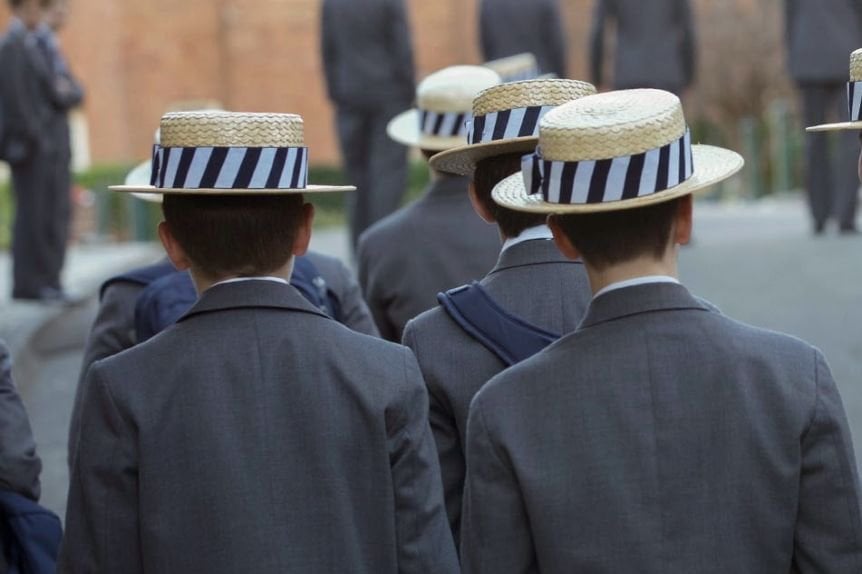 She said the privilege of many private school students fuelled these instances - where teens can dare each other to do illegal activities or get arrested, without fearing any long-term consequences or having a thought of how their actions could impact others.

To curb this behaviour, we need to prioritise and fund programs in schools that teach empathy and kindness.

"That really deconstructs things and helps to shift the mindset, because the adolescent brain is really easy to manipulate sadly," Dent explained.

At home, Dent said one of the most powerful things she'd seen was when a sister or female relative can explain to boys the personal impact and feelings they experience when men call them derogatory names or disrespect them.

With muck-up day lists like those leaked to media this year, we certainly need an entire cultural shift.

Reply
Upvote
Whilst the list certainly  contains some revolting tasks, how much of it was designed purely for shock value?   Seems to me like a group of immature high school boys sat around in a group trying to outdo one another with outrageous suggestions.   Exactly how many of them would pee in the aisle at Woolies or have sex with a mate's dad?   Turns out one of the private girls' school has a similar list and probably isn't the only one.
L
laura__palmer 2 years ago

Reply
Upvote
2 upvotes
Gross. These sorts of kids do not deserve the opportunities they get because of their privilege. If only merit was based on actual virtue and hard work and not what daddy has in his bank account.
Oh, and how unsurprising that private school girls are also up to this stuff. It's about privilege and how these kids know they can get away with a lot before it will have any sort of negative affect on their futures.
News
General
Opinion
True Crime
Politics
Sport
Explainer
Entertainment
Celebrity
Reality TV
Movies
TV
Books
Rogue
Royal
Lifestyle
Beauty
Fashion
Weddings
Home
Wellness
Health
Fitness
Travel
Food
Parents
Before The Bump
Pregnancy
Baby
Kids
Teens
School
Parent Opinion
Work & Money
Money
Finance
Career
Lady Startup
Relationships
Sex
Dating
Separation
Friendship
Family
Real Life
Couples