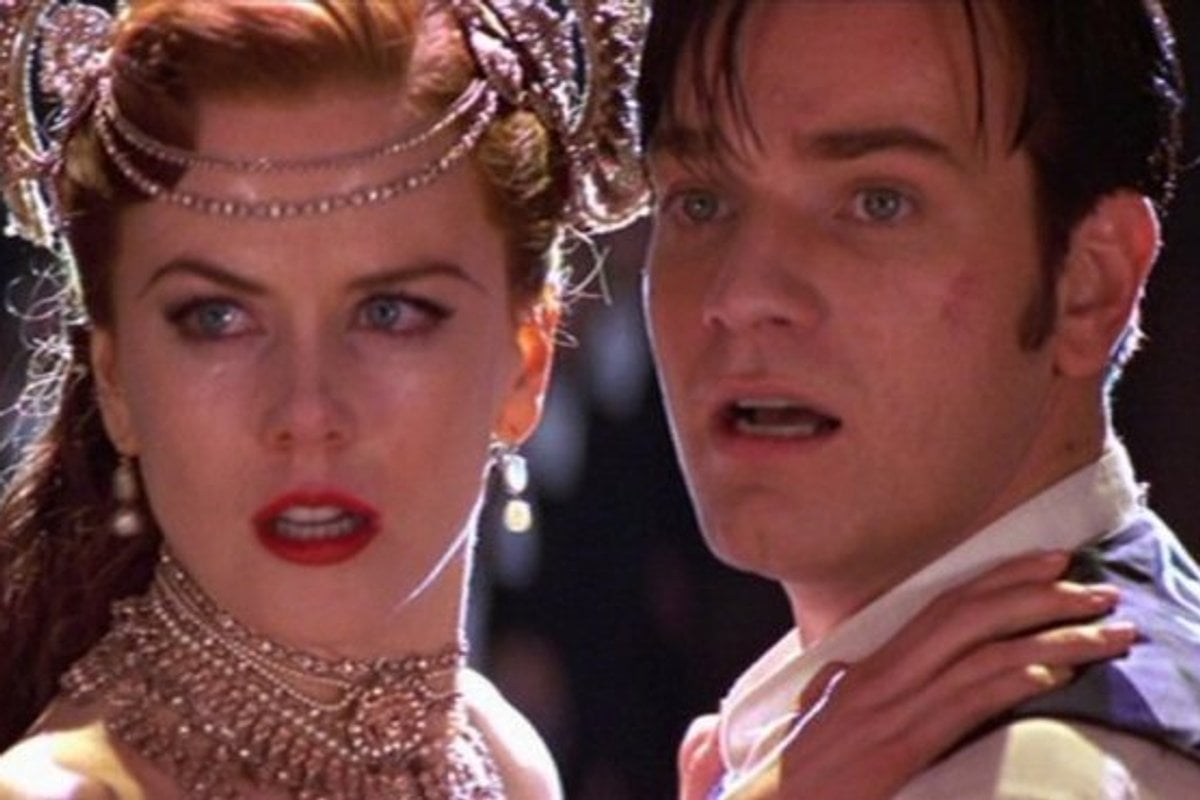 It’s been 20 years since Australian director Baz Luhrmann blew our minds with Moulin Rouge! And whether you loved it or just feel bewildered by it, no one who saw it could forget it.

The musical, which follows a love affair between a poet, Christian (Ewan McGregor), and a courtesan, Satine (Nicole Kidman), at the Moulin Rouge cabaret in Paris, won two Oscars.

Here’s a glimpse into the long and complicated process of making the much-loved film.

Side note: Moulin Rouge! The Musical is playing at Melbourne’s Regent Theatre from August 13, 2021. Take a look at a sneak peek below. Post continues after video.

Video via Moulin Rouge! The Musical.

While working on the film, Nicole Kidman broke a rib after being thrown in the air and caught repeatedly while shooting the musical number, 'Diamonds Are A Girl’s Best Friend'.

"I kept dancing," Kidman told ET. "I didn’t realise I’d even broken it for five days. I thought I’d pulled a muscle."

Later on, Kidman re-broke her rib while getting into a corset.

"I had this thing that I wanted to get my waist down to 18 inches [46cm], which Vivien Leigh had on Gone With The Wind and I was just like, 'Tighter, tighter!'" she shared on The Graham Norton Show.

As if that wasn’t enough, Kidman also ruptured her knee cartilage and had to shoot the last part of the movie in a wheelchair.

"When she says in the film, 'A real actress,' she's in a wheelchair with her leg up," Luhrmann told The Guardian.

After filming finished, Kidman’s knee injury flared up again, and she had to pull out of Panic Room, with the role going to Jodie Foster instead.

2. Heath Ledger and Jake Gyllenhaal both tried out for the role of Christian.

According to Luhrmann, Heath Ledger and Jake Gyllenhaal both sang beautifully, but it was decided that Christian shouldn’t be played by someone so young.

"Jake’s got a beautiful baritone, I think, but Heath sang beautifully as well, and you know, that’s just one of those moments that happens in the journey where you go, like, 'Wow. Well, that would have been different, too,'" Luhrmann told Rotten Tomatoes.

"But Ewan and Nicole were just perfectly matched for that role."

Leonardo DiCaprio also tried out, but the actor said he didn’t get the role because of his "pretty atrocious voice". The actor told Variety that he sang 'Lean On Me' when auditioning for Luhrmann.

"When I hit the high note, he just turned to me... 'Yes, D, I don’t know if this conversation should continue.'"

3. Ozzy Osbourne was meant to play a bigger role.

The heavy metal singer was originally going to appear on screen as the Green Fairy, but in the end, it was all Kylie Minogue.

"The story behind this is that at one stage I had a much more complicated sequence where the innocent Green Fairy metamorphoses into its darker demonic alter-ego," Luhrmann told Gavin Edwards.

"With the ever-helpful Sharon Osbourne, we recorded Ozzy doing 'The Sound of Music' for that sequence – but we ended up cutting down his incredible vocals to a brief scream."

4. The movie originally had a very different opening.

It was intended to begin with Christian and his father having a disagreement over what he was going to do with his life, using the Cat Stevens' classic 'Father And Son'.

"It was the most amazing song that we all felt was perfect for this opening of the film," executive music producer and music supervisor Anton Monsted told EW.

However, Stevens, who has since changed his name to Yusuf Islam, wouldn’t let the song be used in the movie, because of his personal beliefs. So, the opening had to be completely rewritten.

The only other song that Luhrmann really wanted in the movie but couldn’t get the rights to was the Rolling Stones' 'Under My Thumb'. The Duke (Richard Roxburgh) was meant to sing it to Satine in the film. 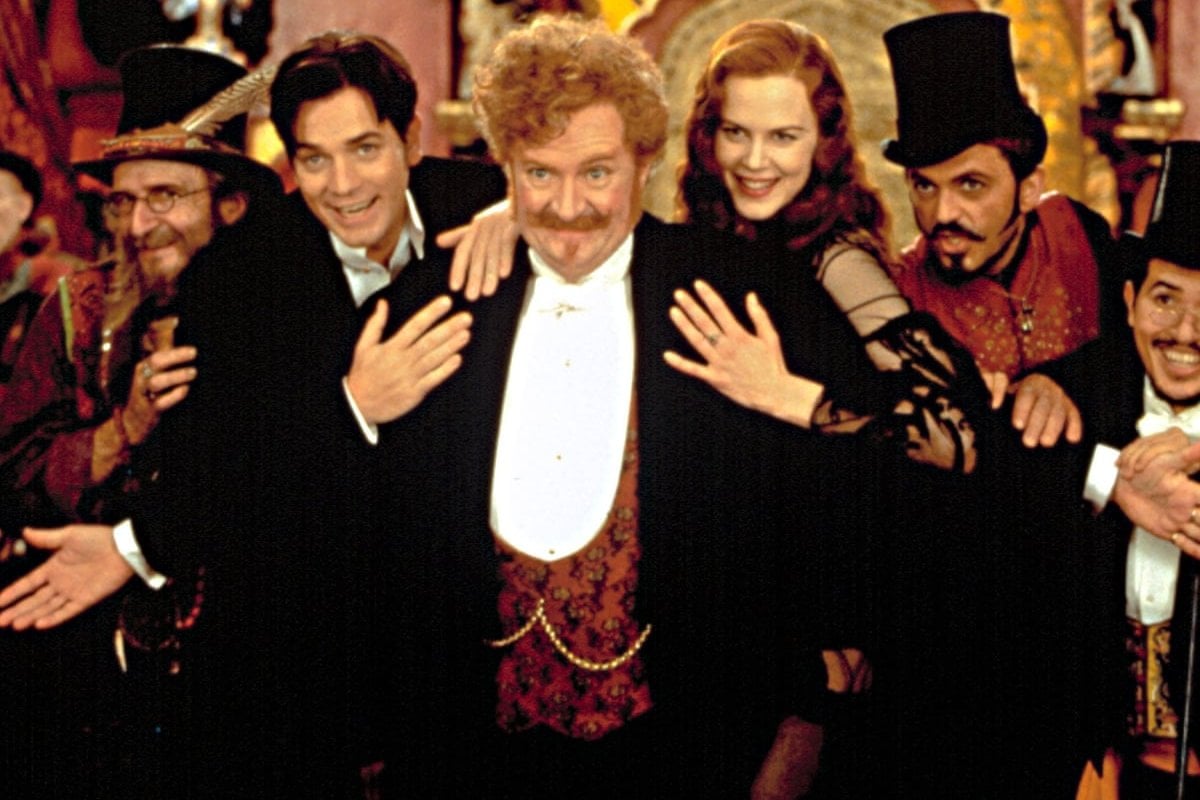 5. Kiruna Stamell had a role written for her.

Stamell, who has dwarfism, was originally just an extra on Moulin Rouge!, but when Luhrmann realised she could dance, he created the role of La Petite Princess for her to play. That role launched her acting career.

"Baz Luhrmann had something that everybody in my career that has helped has had, which was an open mind, which was, 'I'm not going to write you off because you're different, I'm going to embrace it,'" she told the ABC.

Since then, Stamell has gone on to appear in shows such as EastEnders and Father Brown, and has also been a Play School presenter.

6. Moulin Rouge! is dedicated to Luhrmann’s father Leonard, who died on the first day of shooting.

"How mythological is that?" Luhrmann told The Guardian. "Quite typical of him, in a sense."

Leonard died after a battle with skin cancer. Luhrmann’s hit song 'Everybody’s Free (To Wear Sunscreen)' had been a serious message about the need to wear sunscreen.

Before Leonard died, he told his son he had to make the film. Luhrmann said when he felt like giving up, thoughts of his dad kept him going.

"Without getting too sentimental about it, I did say to my dad that I'd get it done."

Moulin Rouge! The Musical is playing at Melbourne’s Regent Theatre from August 13, 2021. Tickets are now available for performances up to January 2, 2022. Book your tickets here.