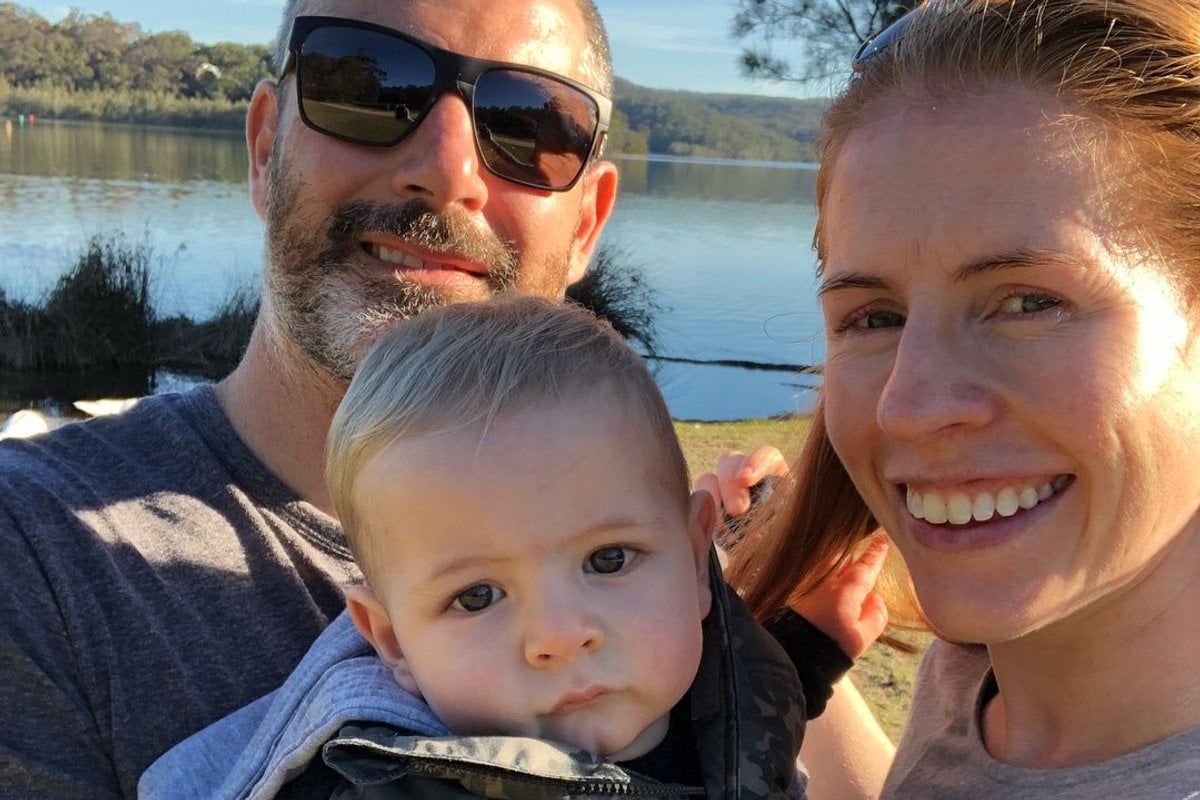 This story deals with the loss of a child and may be triggering to some readers.

Edwina Symonds is a mother of three. She lives with her husband Ant and two of her children Dash and Elodie in the Northern Beaches of Sydney.

Her first son, Sebastian or 'Seb', passed away in July 2018 at just 10 months old. But Edwina is and always will be his mum.

"As a grieving mother, I go through life with a giant hole in my heart," Edwina says.

Watch: Mother's Day can be a difficult time. Post continues below.

"But I also have to allow my heart to grow. It's okay to be sad - I lost my baby boy - but it doesn't mean I can't be happy. People like us who experience grief know that death is a human experience and sadness and happiness can live in the same place."

While Edwina and Ant live with their loss every second of every day, she wants people to know that talking openly about Seb and being able to express her grief is an important part of her life.

"Seb was amazing. He was my first son, and he was an absolute nightmare baby! For those first eight weeks of his life, he cried and didn't stop crying but he was just a beautiful little boy.

"In hindsight, it's like he knew he was only here for a short time - he was so self-assured and confident. We had to work hard to make him smile, and he really knew what he liked and didn't like and it felt like he was more than a baby."

Seb was completely well for the first six months of his life until he had a seizure, which resulted in him being airlifted to Sydney Children's Hospital in Randwick.

"It was my first horrific moment as a parent," Edwina recalls.

"It went for hours before they could get it under control and then he had two more very serious seizures over the next couple of months. This was when they found out that Seb had a very rare genetic disorder.

"He was otherwise well but he would go through these patterns of having seizures that took doctors 10-15 hours to get under control, and then wake up in the neurology department like nothing had happened to him. The neurologists would say how resilient and beautiful he was, which was why it was such a shock to everyone when he died."

Edwina says that despite Seb's serious illness, it was a blessing they didn't consider death to be an option.

"We didn't know we needed to cotton wool him and we certainly didn't helicopter parent him because of his illness. We just went on living a full life with our beautiful baby."

At 10 months, Seb suffered a catastrophic seizure that he did not recover from.

He was admitted into Sydney Children's Hospital on a Friday and like on previous occasions, Edwina and Ant remained by his bedside full of hope that he would wake up. But after an MRI scan on Monday, their neurologist delivered the devastating news that Seb's brain had died some time over the weekend.

In a deeply personal post on her website The Griefy Way, Edwina writes about the moment after they were told Seb was gone.

"I remember screaming that 'I didn’t know'.

"I held him in my arms on Thursday night and gave him his bottle. He played with my hair as he fell asleep. If only I could have had him back for one minute, to have been more present, to know it was our last. I just didn’t know."

The couple enquired about organ donation before being left alone with Seb to grieve and make phone calls to family. In the darkest of moments, Edwina took some comfort from knowing that Seb’s kidneys gave new life to a young adult who had been on dialysis for three years.

The next few weeks passed in a blur for the family who went home from hospital without their beloved baby son.

Listen: Rebecca Sparrow talks to Mia Freedman on No Filter about miscarriage and stillbirth. Post continues below.

Edwina says that one of the hardest parts about grief, particularly when a child dies, is dealing with other people's reactions.

"We all live and we all die but when a child dies, it's like, it wasn't supposed to happen and people don't know what to do with their emotions.

"I think the least people can do is acknowledge the child. I don't believe you can say the wrong thing even if it's insensitive. Although sentences that start with 'at least' are usually bad. When Seb died, I was 19 weeks pregnant with Dash and the sentiment that 'at least I was having another baby' would somehow make me feel better, was illogical.

"You can't just replace a person with another person."

While a few people said hurtful things, Edwina shares how some said nothing at all.

"There were 'friends' I sat next to everyday at work who had shared in my joy of being pregnant and going on maternity leave for Seb, who didn't come to his funeral or make any comment to me at all.

"They literally didn't acknowledge Seb's death which I think says more about them than me. When we lost Seb, I lost friendships as well.

"Some people said to me later on that they didn't want to upset me, which is a weird concept because my baby died and I'm allowed to be upset!"

While certain 'friends' disappeared from Edwina's life, other people showed up in different and often practical ways.

"I don't remember much from the time immediately after Seb died, but aside from the cards and messages, I had a close girlfriend who would discreetly slide in and make our bed every day, or others who would check if we needed any essentials like milk or bread. Good friends set up a WhatsApp group to coordinate meal deliveries and who was bringing what and when, to save food waste.

"It was very special." 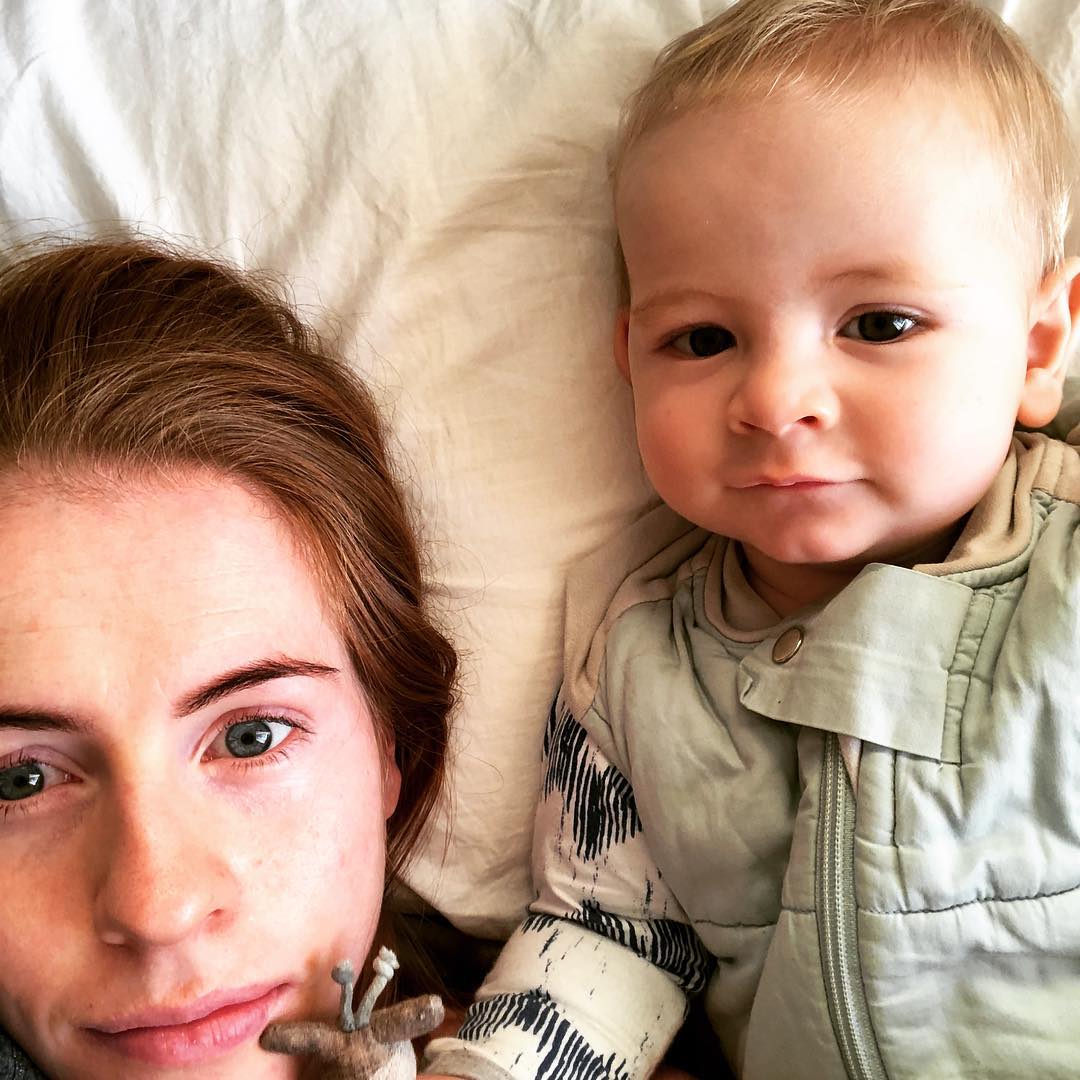 After losing her mum when she was only four, her dad when she was 21, and her beloved grandma in 2013, Edwina knows a lot about grief and loss. But as Edwina explains, the notion she is 'strong' because of everything she has been through is mistaken.

"I get told I'm 'strong' a lot but I don't feel strong. I feel very weakened and really... there's no other way to be. It's more just like survival. Some days I might appear or sound strong, but then the next day I spend three hours crying on the shower floor.

"Layering grief onto being a mother is just another layer of being a mum and women who lose a baby shift to accommodate this way of being."

When 'rainbow baby' Dash arrived 21 weeks after Seb died, the couple were deep in grief.

"We got through that first year of Dash's life just doing what we needed to do. He was a ray of light in the darkness and it was strange because we had a first time parenting experience all over again. But this time the stress was gone, and we were much calmer because we weren't stressing about little things and just looking at Dash saying, 'I love you so much'.

"Dash was shining the light of two little boys and we felt so lucky that he had come to us. In that sense, he was the perfect rainbow baby."

When their third child, daughter Elodie, turned 10 months in 2021, Edwina couldn't believe that was the age they had lost Seb.

"I honestly couldn't imagine losing Elodie at that age. Because Seb was our first, he seemed so much older at 10 months, but in hindsight he was just this tiny little baby."

Three-year-old Dash and 18-month-old Elodie know all about their older brother Seb.

"We have photos of Seb around the house and we say goodnight to him every night. They know which toys belonged to him and we talk about him all the time - we've made it normal that they have this absent brother, but they don't understand the concept of death yet. I don't think they'll truly understand what it all means until they have kids of their own."

Shortly after Elodie's birth, Edwina became a peer support volunteer for Red Nose Australia. She is now trained to support bereaved families who have experienced loss - from miscarriage to losing a baby or child.

"People call up sometimes just to cry, or often because of something awful or insensitive a family member or friend has said. Whatever they need to say, we're there at the end of the phone to listen."

Edwina wants to change the conversation around grief by helping people to better understand how to offer support to someone who has lost a baby or child.

"If you know someone has lost a baby, then let them say their baby's name. It might be awkward but so what. Always allow them to talk about their child and always send a physical card when someone dies. We have kept all the cards we got when Seb died in his birth box. Because his life was so short, we don't have many physical reminders, so these are an important piece of his story."

If you know the grieving person well, Edwina says to still write that card but also think about practical ways you can help.

"We got so much food delivered, we had to buy a chest freezer.

"I wouldn't recommend excessive sweet treats as what people really need is nourishment.

"But don't ask a grieving person to tell you if they need something as they won't. Instead, try to talk to someone close to them about what you can do. And if you know them well enough to go to their house, always do something useful while you are there. Put a load of washing on, or change the water in the vases of flowers.

"If in doubt, just take over lasagne (frozen portioned and labelled!) with the card. Food really is love, so showing support in this way is always appreciated and a simple way to show kindness."