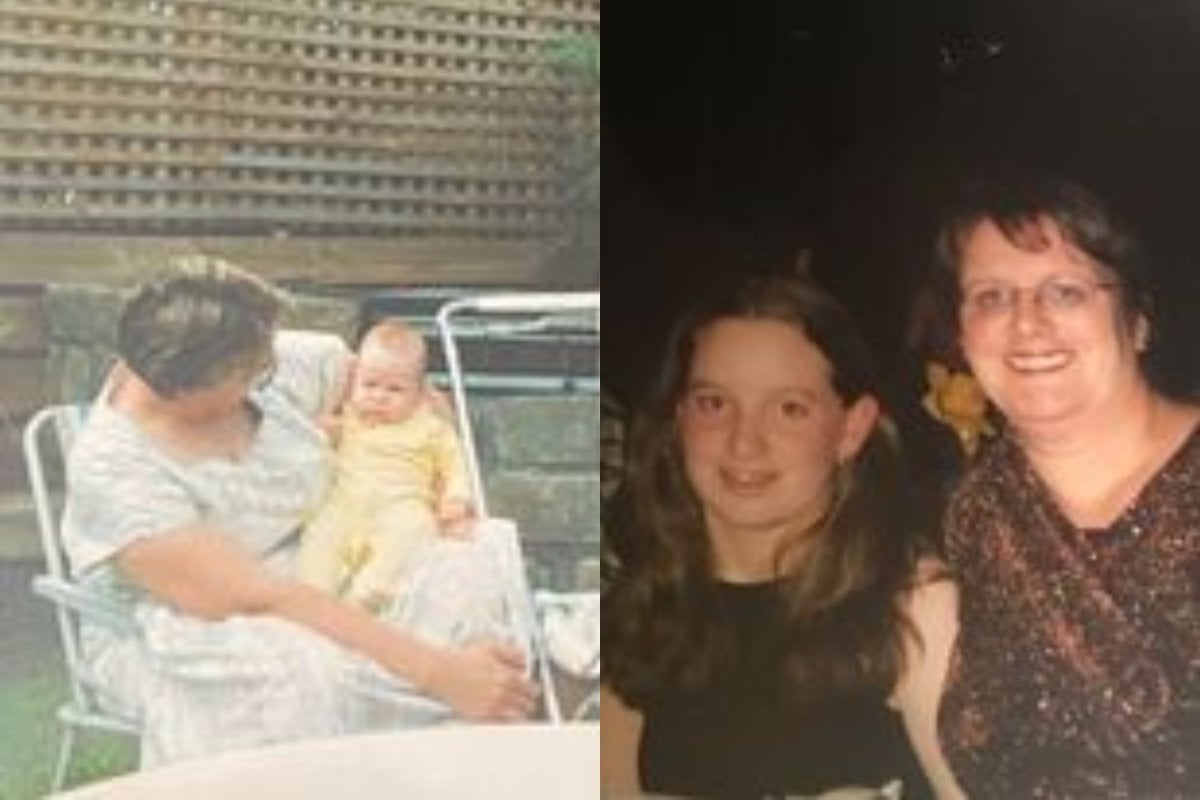 As Mother’s Day approaches, I have been reflecting on my mum, Janet, who died from a heart attack when I was just 13 years old.

She was loving, caring, witty and smart. When I was a child, she seemed extremely busy and as I look back now, especially as a mother myself, I wonder how on earth she managed it all.

I was the youngest of three, with two older brothers. She worked full time as a Business Analyst for Medibank Private and also went to night school two nights a week to study accounting. In fact, she only had one semester left to go when she died.

Watch: Mother's Day can be a difficult time for some. Post continues after video.

She loved sewing and would have a weekly sewing night with her friends, as well as a monthly sewing trip away. Her sewing project for the last 12 months of her life was a patchwork quilt that she was making for me. Our weekends were spent running around for my brother’s sports, visiting my grandparents (her parents) every week without fail.

In winter, we would go to the football as a mad Richmond family and summers were often spent at the beach where she would sew or read on the foreshore.

Her sudden death at such a young age has had a profound impact on me. My mum had a heart attack and two days later she was dead. I had to grow up overnight, and no longer related to my peers. As a result, I suffered from a complete loss of identity.

I went to an all-girls school which exacerbated the feelings of disconnect and isolation, as my school was so focused on the mother/daughter relationship. My peers and I were living in two different worlds. They lived in my old world where I had a mum who was alive, and I lived in a new world where I felt so alone because I now had a dead mum.

Some days it is hard to comprehend that I have lived nearly two-thirds of my life without her. Some days I can hardly remember her and some days I feel stuck as though I am still 13 years old when I had to leave her lifeless in the hospital bed.

It will be 20 years in November since she died. I have lived through almost 20 Mother’s Days without her.

In the early years I would spend half the day celebrating my grandmother (my main maternal figure) and the other half of the day hidden away in my bedroom hiding from the world, trying to pretend that the day and the accompanying overwhelming sadness didn’t exist.

I was often told from older women who had lost their mums that once you have kids, things will be different and that Mother’s Day would take on a new meaning.

For many years I looked forward to having a child of my own in the hope of altering the emotion and grief of this day and for Mother’s Day to take on a different purpose and meaning. Those who have experienced the loss of their mother know that there is nothing that can take away the constant void from our lives and the persistent heartache of not having a mum around to help shape you, especially while trying to navigate the journey of motherhood.

In 2020, I became a first-time mum to my daughter Matilda. 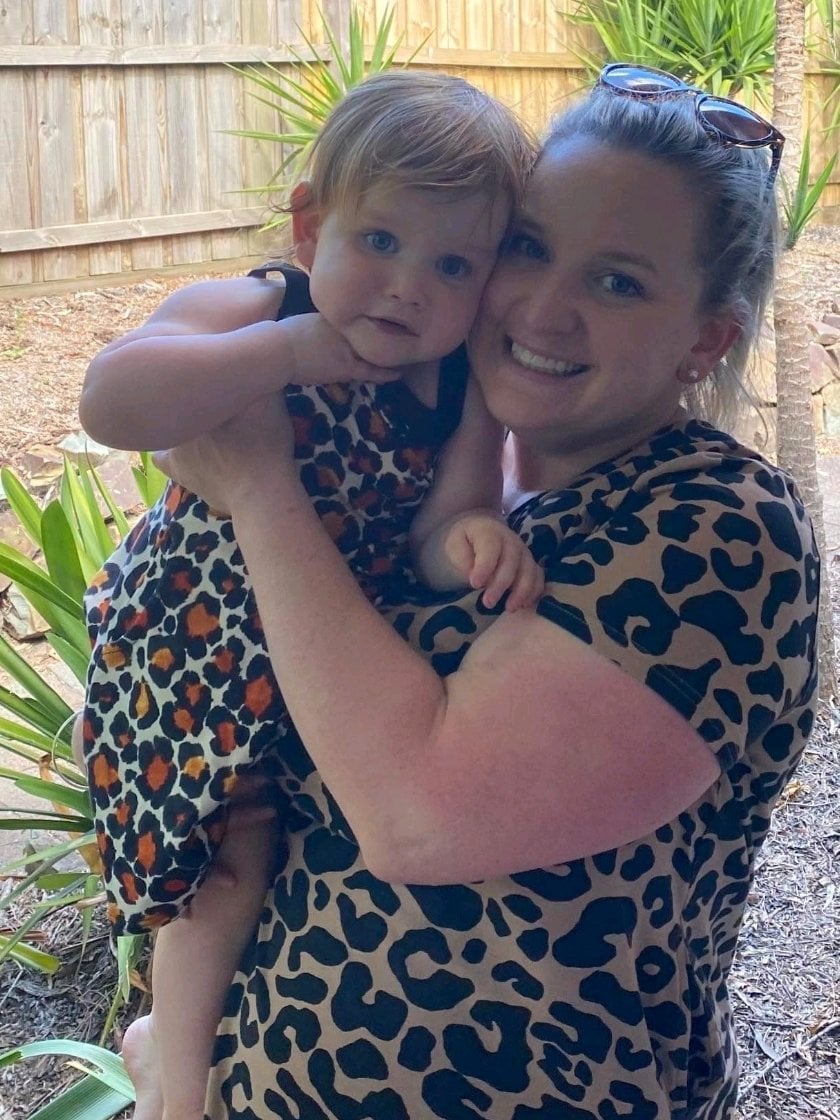 As a mum, I now approach Mother’s Day as an opportunity to create memories with my daughter. I try to block out the noise of the relentless Mother’s Day advertising in the weeks prior. I have found over the last couple of years that the advertising around the shopping centres and online ads don’t sting as badly as they used to and I remind myself that as I am a mum now; the advertising is now targeted at my small family.

I am also conscious that I am now probably the envy of other motherless daughters as they see me walking around shopping centres with my daughter, not being aware that I too experienced early mother loss. This is something I try to remind myself of when I see other mothers/daughters walking around with their mum. Maybe their mum also experienced mother loss when they were young too.

Often, I have found the lead up to Mother’s Day is sometimes harder than the day itself.

On Mother’s Day, I honour my mum by honouring myself and the relationship with my own daughter. I treasure the gifts my daughter has creatively made with love at childcare. I feel that it is such a privilege to be a mum, and it is a privilege for my daughter to still have me in her life.

I am conscious to make an effort to celebrate this unbreakable, unique bond and do what I can to make this day about the two of us. Naturally, I will always wish my mum was alive to celebrate the day with me and to meet my daughter (even just once).

My advice to other motherless mums is to never let others judge you, especially on Mother’s Day. Do what you feel you need to do, or not do, to get through the day. If you want to visit the cemetery then do that, if you want to lock all the doors and stay inside then do that too; if you want to throw a party to celebrate all things being a mum, then go for it!

Listen to No Filter where Mia Freedman is joined by Sarah Ferguson on how she's facing Mother’s Day without her beloved mum. Post continues after podcast.

It doesn’t matter how odd or crazy these things are to someone on the outside. What matters is that you do what you feel like the right thing for you is, and ensure that you’re not spending too much of the day pleasing others, as the expense of your own emotions, feelings and needs.

I have been known to break the day down into hourly blocks and have done this for nearly every Mother’s Day. I count down the hours that are left until I can go to bed and the day is over. 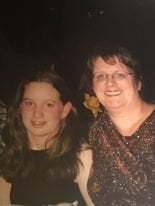 Further, it’s a celebration of the precious role I now have as a mother, and for surviving another year of the never-ending journey of motherhood.

Eloise Baker is the co-founder of Motherless Daughters Australia - A not for profit organisation that represents, informs, supports and connects women and girls whose mums have died, to help navigate the everyday and life’s key milestones. Their support can be accessed via their  website, Facebook page,  Online Peer Support Group and  Instagram.