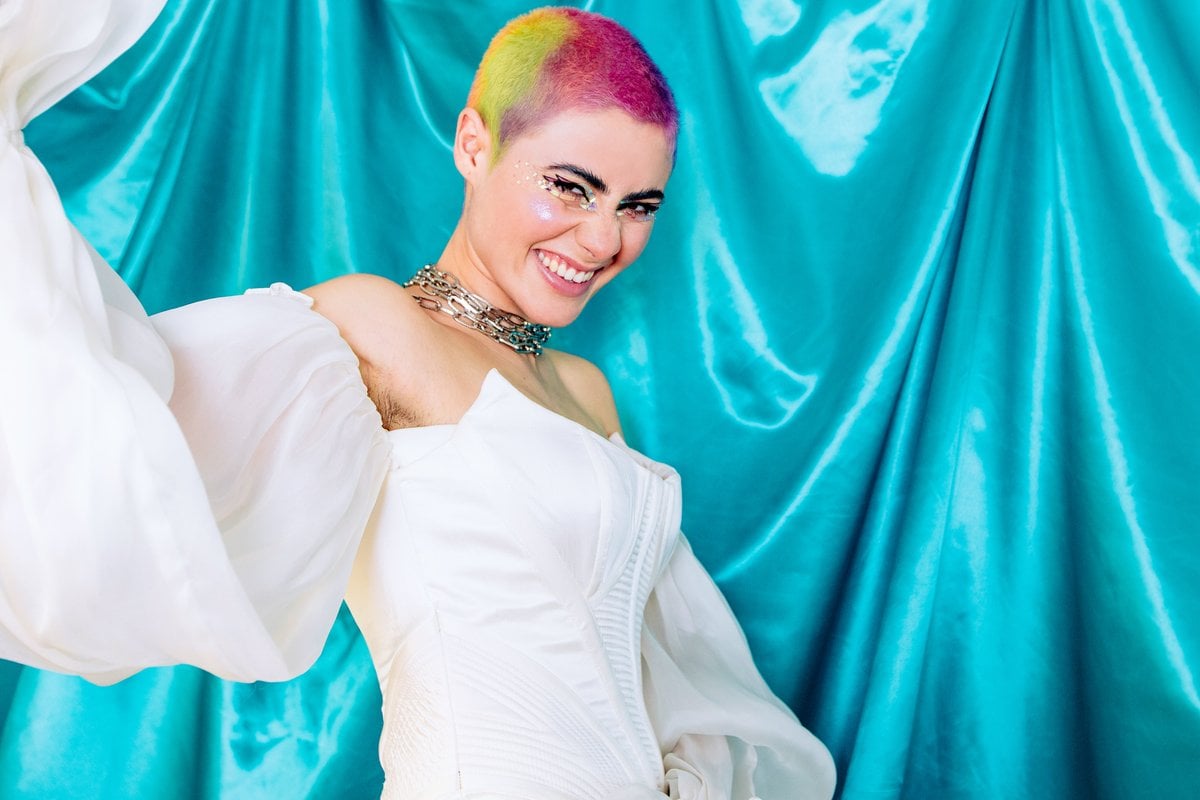 After an extra long wait, Eurovision is finally here.

The international song competition, which was cancelled in 2020 due to the COVID-19 pandemic, is set to be broadcast on SBS from May 19 to May 23.

But amid ongoing travel restrictions, Australia's artist, Montaigne, won't be travelling to Rotterdam in The Netherlands for the competition.

Instead, the Sydney-born musician has submitted a video recording of her Eurovision single 'Technicolour', which will air during the semi-finals this week.

Watch a clip from Montaigne's music video for 'Technicolour' below. Post continues after video.

Speaking to Mamamia ahead of The Eurovision Song Contest, Montaigne shared that she has since accepted the unfortunate news.

"I feel fine now," the 25-year-old said. "I've sat with the news for a while, and I've been doing lots of interviews and recordings and all of that stuff in the lead-up, so I've sort of settled in."

Now, as the competition approaches, Montaigne (real name Jess Cerro) is looking forward to bringing "a little chaos" to the world of Eurovision.

"On stage for a while there, I wanted to come across as having this character that had depressed lady clown energy," Montaigne told Mamamia.

"Eurovision followed shortly afterward, and we’re quite committed to the idea of [that character]. And I really like how it challenges the traditional views of women," she continued.

"When I think of a woman at Eurovision, I usually expect a beautiful sparkly dress, long flowing hair, and pristine makeup. And I’m like an agent of chaos when it comes to artistic performances, so I didn’t really want to do that.

"Eurovision is still a highly choreographed and really precise thing, so I had to figure out how to add a little chaos into something that is otherwise very orderly. And I think the clown aesthetic was sort of achieving that." 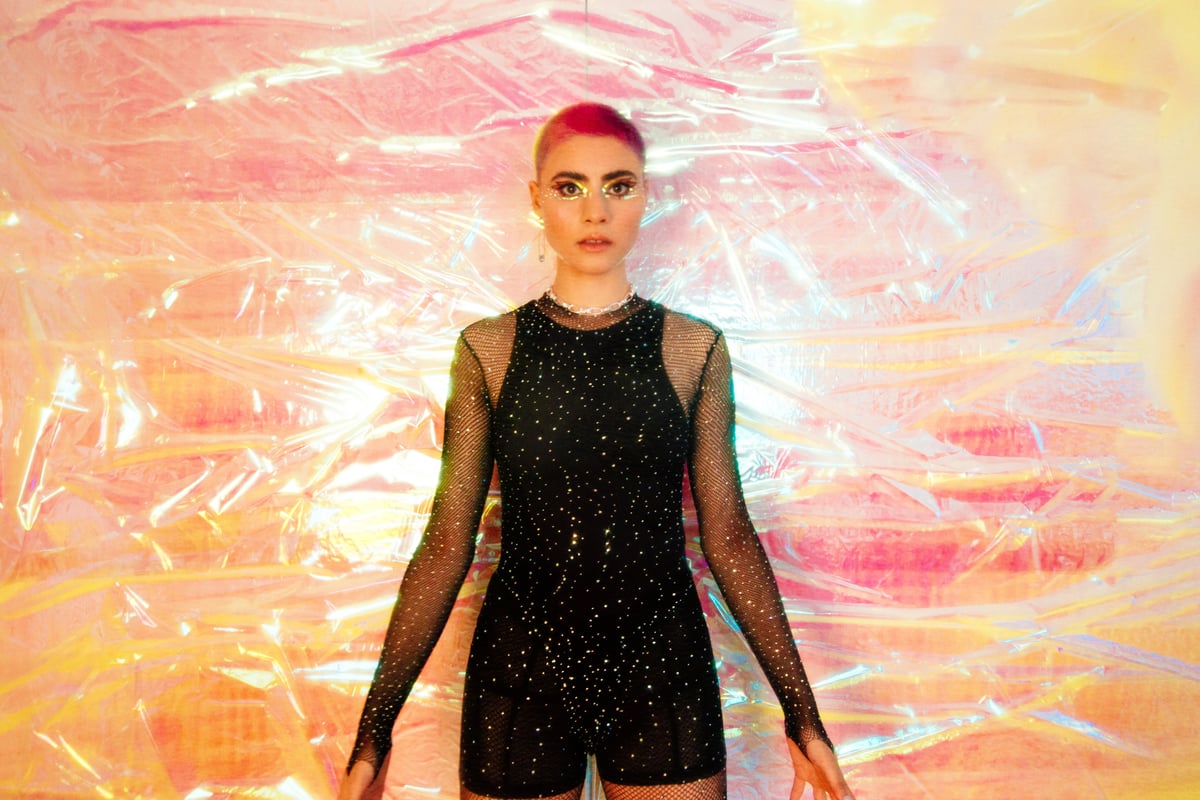 The Sydney-born signer was originally chosen to represent Australia at Eurovision in February 2020 after winning SBS's Eurovision – Australia Decides with her performance of 'Don't Break Me'.

But one month later, the competition was cancelled due to uncertainty created by the spread of COVID-19.

"I've had my cry. I spent a couple of hours paralysed in bed, despondently scrolling through the many lovely tweet mentions from people expressing their love and support," she wrote on Facebook at the time.

"I imagine I'll probably have a lot more cries in the next little while, for me and for the wonderful team who were working with me to make our vision come to life."

Afterwards, like many Australians involved in the entertainment industry, the 25-year-old was forced to step back from touring due to the pandemic.

"There were definitely a few months starting from March last year when nothing was happening. But I didn’t mind that too much, quite frankly, because I was pretty exhausted and ready for a break," the musician told Mamamia.

"Even though I didn’t get to do proper gigs for a while, I was still doing live stream stuff and I had some people ask me to write songs [for them], so it still felt like [work] was sort of moving along."

The Australian singer first gained traction following the release of her debut album Glorious Heights in 2016, which led her to win Breakthrough Artist at the ARIA Music Awards.

But for Montaigne, working in the music industry hasn't always been easy. 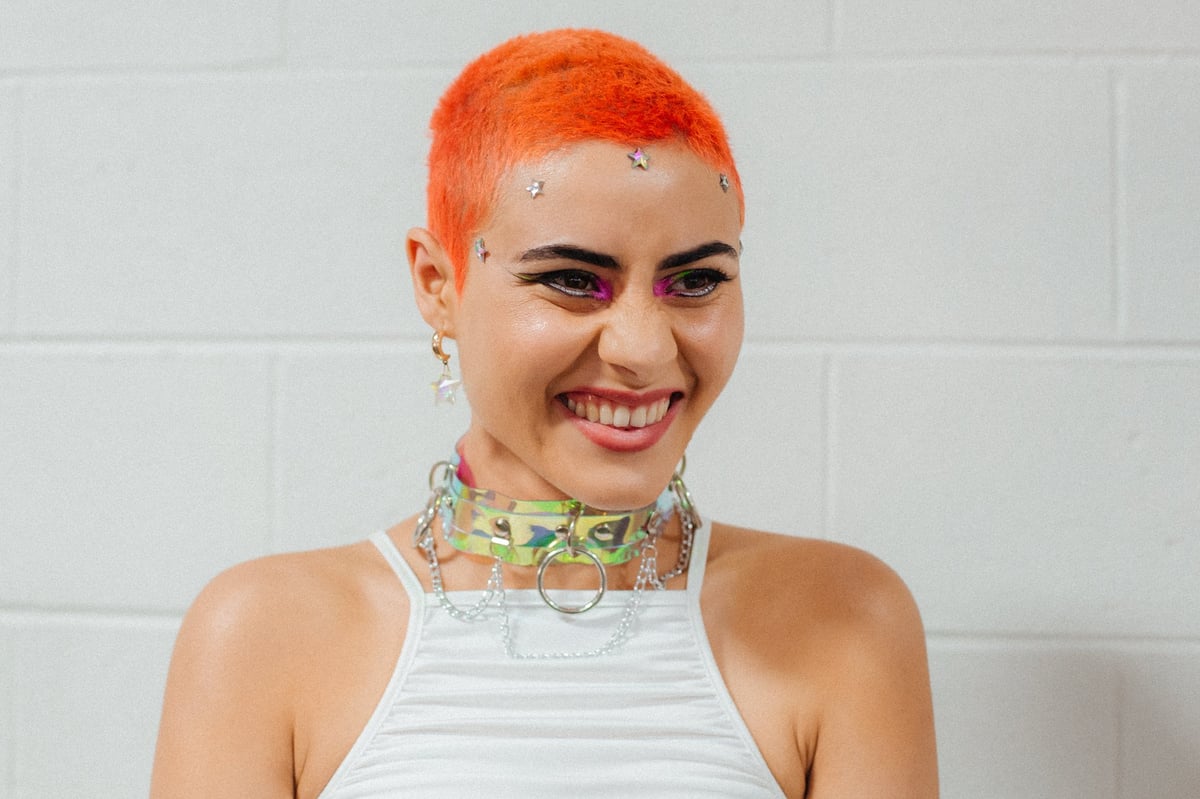 Following the success of her first album, the singer struggled with burnout.

"I think I was caught up in the same thing that everyone does trying to hustle in the inner city and being committed to the productivity myth, where if you’re not working, then you’re worthless," she shared.

"I just did too much. I was running a lot, like upwards of 10 kilometres each time, and also playing AFL, and trying to do shows, and trying to travel overseas to make an album. So, it was just a lot, and it went on a lot longer than it should have."

As the name suggests, the album delved into a range of complex issues, including burnout, health issues, gender pay imbalance, loneliness, body image, environmental issues, and past relationships.

But while the singer frequently uses both her music and her public profile to talk about the things that matter most to her, she isn't always comfortable being in the public eye.

"I can tolerate a certain amount of attention, but once it starts to broaden and grow, there are going to be a contingent of people who do not have your best interests at heart," she shared.

"I don’t cop heaps of it at this stage, so it’s not too much of a problem. But even if you don’t believe what they’re saying, it’s still that thing where someone has gone out of their way to try to [upset] you.

The 2021 Eurovision Song Contest, featuring Montaigne, will be broadcast from May 19 to May 23 on SBS.

Reply
Upvote
I was so excited the first year we were in Eurovision, but it just feels weird and sad to keep doing it, we’ve definitely overstayed our welcome. Let’s just drop in as special guests every ten years or so and get back to being enthusiastic voyeurs the rest of the time.

Reply
Upvote
I love Eurovision, I missed it last year, and it will be interesting to see how they manage it this year. I'm a little on the fence with this song, unfortunately I think not being able to perform live is going to work against her. Good luck to Montaigne, though!

Reply
Upvote
1 upvotes
@rush I saw a brief clip on the morning news. She looked nervous, understandably, suddenly thrust into solo representation of Australia. A lot to take on, especially as her live performances will have been really limited through 2020.