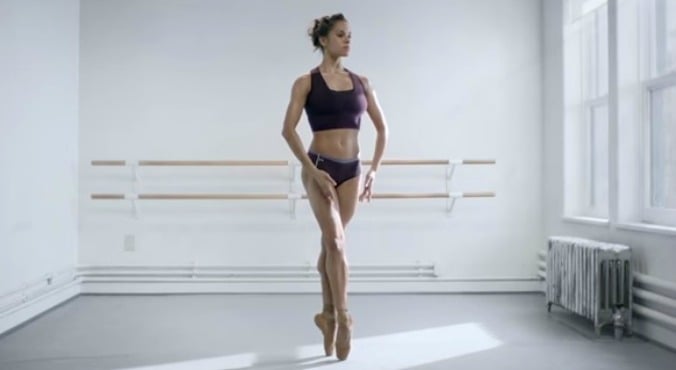 When she was 13, Misty Copeland was told she had the “wrong body” for ballet.

Her beautifully muscular legs, larger bust, big feet and torso length cost her the opportunity to participate in a number of major dance programs as she attempted to start a professional career.

Eleven years later, Misty became only the second African-American woman in history to be named a soloist at the American Ballet Theatre, the most prestigious ballet company in the US. Check out these incredible images from Misty’s Instagram page:

This week, Misty’s success story has the whole world talking, thanks to an ad campaign for US sportswear brand Under Armour.

In the video, called ‘I Will What I Want’, the 31-year-old is shown warming up and then performing an intense routine, as a young girl’s voice reads out a rejection letter she received as a budding teenage ballerina.

As the voice details everything that’s “wrong” with her body and technique, Misty flawlessly pirouettes and jetes across a stage like she was born to do it. Watch this:

It’s impossible to take your eyes off her. And the parts of her body that were so “wrong”? They’re exactly what make her the masterful athlete/badass ballerina she clearly is today.

In just one minute, Misty has put the myth of the ‘perfect dancer body’ – one that’s held back so many women in its time – to bed. In spectacular style.

Have you ever proven your doubters wrong? Tell us about it!