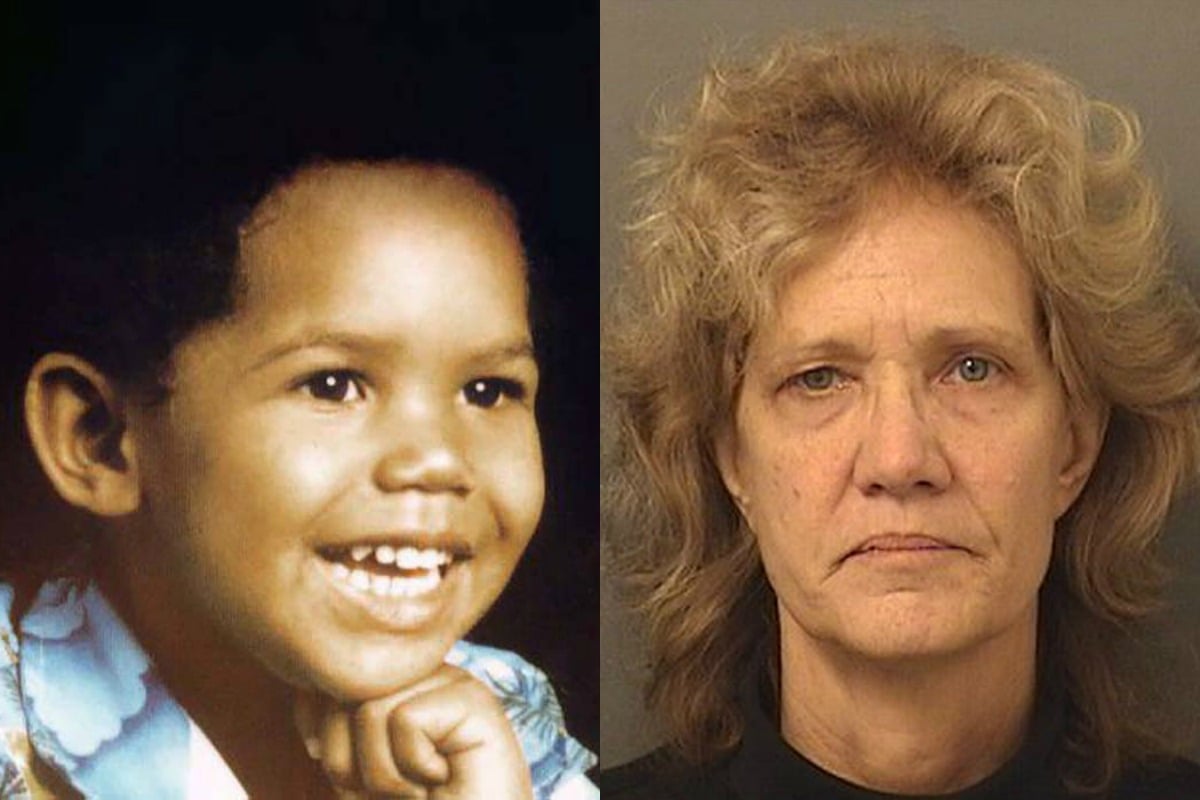 When Amy Fleming’s son disappeared 32 years ago, she stood in front of news cameras, her face the picture of anguish.

Fleming’s three-year-old son, Francillon Pierre, who she referred to as ‘Yo-Yo’ or ‘Yo’, disappeared on August 2, 1986, while the family was at a swap meet in North Las Vegas.

At the time Fleming told authorities that she, her then-boyfriend Lee Luster, and Yo, were at a local swap meet when they stopped at a food stall for some lunch. Yo was only about 10 feet away when he disappeared.

Fleming says she turned her back for a minute, while she was putting mustard on the food, and when she turned around Yo had simply vanished.

Luster had gone on to a nearby stand to look for a bike for Yo and wasn’t looking in his direction at the time.

While hundreds of volunteers searched for the toddler, police immediately had their suspicions about Fleming. Her story had one fatal flaw – numerous witnesses from the swap meet said they never saw Yo at the venue that day.

Francillon Pierre, known by his nickname YoYo, was reported missing Aug. 2, 1986, from the then-Broad Acres swap meet in North Las Vegas. @NLVPD announced on Monday that his mother, Amy Elizabeth Fleming, has been charged with murder in his disappearance→https://t.co/jbgVRAv6E9 pic.twitter.com/Ow10jbttKH

After an extensive search of the area and a thorough investigation, detectives were left with zero leads.

Despite the bleak outlook, Fleming and Luster told the media they hoped little Yo was still alive.

“If anybody knows anything about where he is, or if he is safe, I want them to just tell me that,” Fleming said on camera. “I will be able to go through the proper channels to get him back. I’ll do anything that is necessary.”

At a news conference in Las Vegas on Monday, detectives on the case said the swap meet story was just a diversion. They believe Yo was likely already dead before Fleming and Luster even went to the swap meet.

“Although we are saddened that we could not bring you today good news that we found Pierre alive and well, we are fortunate that we can bring some closure to those affected by this 32-year-old cold case,” North Las Vegas Police Department Chief Pamela Ojeda explained.

According to the Washington Post, the case, which had long been considered cold, was reopened in 2017 after someone tried to apply for a birth certificate using Yo’s name in order to commit identity theft.

When detectives began to review the case, new information came to light and new witnesses, who were reluctant to speak 30 years ago, came forward with their stories.

“I’d like to tell you right now that we have a smoking gun,” Detective Steven Wiese said during the press conference.

“We’d love to have the body of Francillon, or DNA evidence that proves something. That’s not what this case is. This is a case of a lot of little things, that put together, gives us the knowledge that Amy Fleming was involved in the homicide of her child.”

Both Fleming and Luster failed polygraphs at the time of Yo’s disappearance, but police did not have enough to charge them.

While working on the case, detectives also discovered Fleming and Luster had previously been arrested on child abuse charges, after a babysitter noticed large welts on Yo’s body.

“I believe that they both obviously knew something about this child and I believe that he wasn’t at the swap meet,” retired North Las Vegas Police Department Lt. Bob King said at the press conference.

“I knew in my heart of hearts, the child was not there.”

May our BLESSED LORD & SAVIOR JESUS CHRIST be with you all during the investigation you are doing. THANK YOU from the bottom of my heart for continuing it. That poor precious baby needs justice & you guys are the ones that can get it for him. Hugs to each & everyone of you.