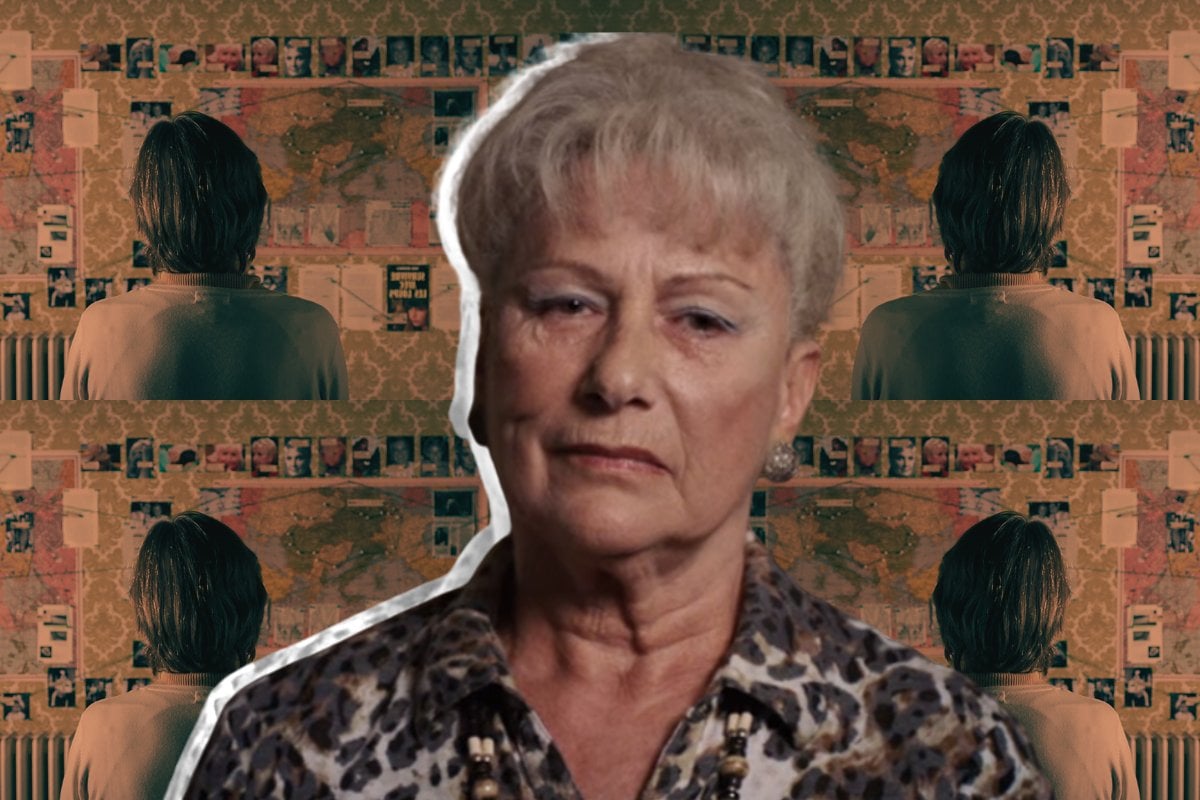 Misha Defonseca always had an affinity with animals.

Her house was full of pet cats. Several wolf-themed clocks hung on her kitchen wall and her shelves were cluttered with wolf figurines.

So when she got up on stage at the Temple Beth Torah in Holliston, Massachusetts, on Holocaust Remembrance Day in 1989 or 1990 and told her extraordinary tale of survival, no one doubted her story.

Why would they? It was so unbelievable it had to be true.

“I was, like, mesmerised,” her neighbour Karen Schulman, who witnessed the speech, says in the new Netflix documentary, Misha and The Wolves.

“People never knew about her being a Holocaust survivor. I had tears in my eyes. She was hungry. She was cold. She was lonely. She wanted her parents. How did this person survive?”

Watch the trailer for Netflix's Misha and The Wolves. Post continues below.

Misha told the enraptured crowd she was just seven years old when her resistance-fighting parents were captured by the Nazis in Belgium in 1940 and deported to Germany. Like many 'hidden children' from that time, Misha was taken in by a local Catholic family, who changed her name to Monique De Wael and pretended she was one of their own.

One night, Misha's foster grandfather showed her a map and told the young girl her parents were in Germany, which was east of Belgium.

A few days later, Misha left her new home in Brussels with a compass, a knife, some food and some drinking water, and started walking east towards Germany. She was determined to find her parents.

Misha told the crowd gathered that day she spent years walking through the forest, alone, with only animals for company.

While millions of Jewish people were loaded onto trains and transported to concentration camps, Misha walked alone in the forest, dreaming of the day when she would finally be reunited with her parents.

When the walk became difficult, she told herself that she would find her parents alive at the end of her journey, after all, if she could survive this as a child, surely they would survive too?

One day, Misha was sitting on the forest floor, eating some food, when she felt someone watching her. She turned to see a large wolf, a short distance away, calmly surveying her.

The wolf came closer, and she gave it some food.

When she continued on her walk, the wolf came with her. Misha said it was soon joined by a whole pack of wolves, who calmly followed her on her journey and protected her.

Misha was one with the wolves. They became her family.

When the war finally ended in 1945, Misha made her way back to Belgium on her own. Traumatised by her experience, she later moved to the US and started a new life.

Sitting in the crowd at the Temple that day was a local woman named Jane Daniel who had a small publishing house. Jane immediately saw the value in Misha's story and knew it could be a bestseller.

In 1997, when Misha was 60, Jane published her memoir Misha: A Mémoire of the Holocaust Years. The memoir told the story of Misha's incredible journey through the forest, and what happened afterwards when she reached Warsaw, Poland.

In one chapter, Misha described stabbing a German man to death after she witnessed him raping a young girl.

While the memoir told an unbelievable story that should have been flying off the shelves, sales were initially sluggish. That's when Jane took the book to Disney and the Oprah Book Club to assess their interest.

A producer from The Oprah Winfrey Show even flew to Massachusetts to film footage of Misha interacting with wolves at a local sanctuary.

During filming, Misha went into the enclosure alone and when a large wolf jumped on her shoulders and took her head in its mouth, Misha removed her head, unperturbed.

The moment confirmed to everyone present that she really did have a deep connection with the animal.

Then Misha stopped taking Jane's phone calls. She told her she wouldn't do The Oprah Winfrey Show. Soon, Jane was served legal papers. Misha was claiming that Jane hadn't paid her any royalties from the book.

The case went to court and the jury, taken in by Misha's incredible tale of survival and horrified by Jane's attempt to take advantage of her, found in favour of Misha to the tune of $7.5 million dollars, which was a staggering amount for a book that so far had only sold 5000 copies. The judge then ruled that Jane actually owed Misha $22.5 million dollars.

Jane's business and life were destroyed. Misha went on to sign with a French publisher who sold her book all over Europe, even in Belgium.

While planning her appeal, Jane came across Misha bank account details. On the form, Misha had listed her mother's maiden name (Donvil), her date of birth and her place of birth. All details she had publicly claimed she didn't know.

Jane immediately felt that there was more to Misha's story. With the help of genealogist Sharon Sergeant, Jane discovered there was a discrepancy between the US and French editions of the book. In the US version, Misha listed her surname as De Wael, but in the French edition, which was also sold in Belgium, Misha changed her surname to Valle.

Sergeant recruited Evelyne Haendel, a genealogist in Belgium, who was herself a 'hidden child', to look into Misha's story.

Then she decided to look at the Catholic records from the time. And that's when she found the answer.

Monique De Wael had been born and raised a Catholic and even attended the local Catholic school. She spent her childhood in the care of her grandparents. She was not Jewish; she had never been named Misha, and she certainly hadn't spent years hiking through the forest in search of her parents.

There were no wolves.

LISTEN: The story behind Hacks will blow you away. Post continues below.

“Not only was she not a Jewish child hiding in the forest from the Nazis, she was a Catholic child safely enrolled in school,” Jane says in the documentary. “She wasn’t anywhere near wolves. She was playing to an audience. She knew exactly what she was doing.”

Her parents had been deported to Germany and killed in a concentration camp though.

Her father Robert had fought for the resistance and when he was captured and tortured, he made a deal with the Nazis to turn in the other resistance fighters.

Because of this, in her hometown, Misha was known as "The Traitor's Daughter".

That may explain why she went to such incredible lengths to create a narrative around her own childhood. A place she could escape to.

When the truth came out, Misha confessed to her lies. In a statement she said that although her extraordinary story was not reality, it was her reality. Her way of surviving.

“I ask for forgiveness from all those who feel betrayed, but I beg them to put themselves in the shoes of a four-year-old girl who had lost everything."

Misha and The Wolves is streaming on Netflix now.