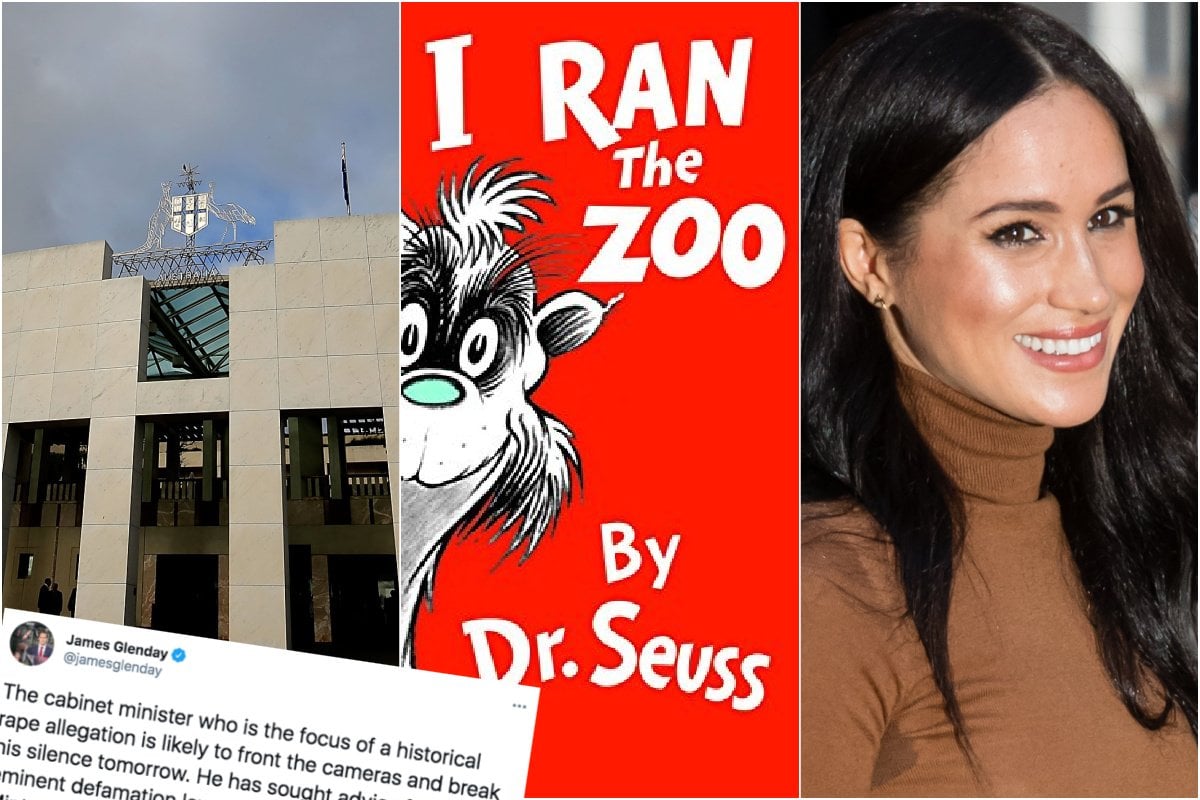 The federal cabinet minister at the centre of historical rape allegations will reportedly make a public statement to declare his innocence.

The sexual assault, which is alleged to have occurred in Sydney in 1988, has led to widespread speculation about the accused man's identity.

It's also sparked pressure on Prime Minister Scott Morrison to deal with the allegations, which he has insisted are solely a matter for police.

#BREAKING The Cabinet Minister, who is the focus of a historical rape allegation, is likely to break his silence tomorrow.

Sources within the Government say the man is likely to make a statement and possibly take questions from journalists. @abcnews

Former prime minister Malcolm Turnbull has led calls for the man to identify himself after Mr Morrison said his cabinet colleague vigorously denied the allegation.

"He should out himself and he should provide a comprehensive statement about what he knows about the allegations," Mr Turnbull told ABC Radio on Tuesday.

The minister will go reportedly go public on Wednesday.

NSW Police closed its investigation into the historical allegations on Tuesday because there was not enough admissible evidence to proceed.

The woman who made the allegations took her own life in Adelaide in June last year, after telling police in NSW she didn't want to proceed with her complaint.

Meghan, the Duchess of Sussex, has been awarded 450,000 pounds ($A803,210) as a provisional payment towards her legal costs after she won a privacy claim against the Mail on Sunday which had printed extracts of a letter she wrote to her father.

Last month, a judge at London's High Court ruled the tabloid had breached her privacy and infringed her copyright by publishing parts of the five-page letter she wrote to her father, Thomas Markle, who she fell out with on the eve of her wedding to Queen Elizabeth's grandson Prince Harry.

Judge Mark Warby ruled in her favour without holding a trial, saying the articles were a clear breach of privacy after the paper argued the duchess had intended the letter's contents to become public and it formed part of a media strategy.

At a hearing on Tuesday, Warby refused the paper permission to appeal that decision, saying he saw "no real prospect" that the Court of Appeal would reach a different conclusion.

The court was told Meghan's legal team was seeking more than £1.5 million in legal fees, with half the amount to be paid within 14 days, a sum the paper described as "disproportionate".

Warby agreed to make an interim costs order of £450,000, saying the final sum "may well be considerably more than that" after other outstanding issues were resolved at later hearings.

ADF to step in on COVID vaccine rollout.

Defence personnel will step in to add some firepower to the rollout of coronavirus vaccines across Australia.

The Australian Defence Force will from next week help administer the COVID-19 vaccine in aged care homes, with an emphasis placed on facilities in regional areas.

"They are very organised - we set our best expectations and they continue to beat them," Health Minister Greg Hunt told the Nine Network on Tuesday.

Army doctors and nurses are undergoing training this week before they join the work to immunise aged care residents and workers from next week | @rachelclun https://t.co/RnD3qAaXJv

Mr Hunt remains confident all Australians can get at least a first dose of the vaccine by October, despite a slow start to the program.

Administered doses have fallen well short of the 60,000 target in the first week, but the government believes ground can be made up.

As of Tuesday evening nearly 42,000 Australians have had their first dose, including more than 13,000 aged care residents at 158 facilities.

A nine-month extension to the Victorian government's state of emergency powers has passed parliament with the support of three crossbench MPs.

Greens leader Samantha Ratnam, Reason Party MP Fiona Patten and Andy Meddick from the Animal Justice Party voted in favour of the extension late on Tuesday, giving the government 19 votes to 18 in the Legislative Council.

The trio, who also backed a six-month extension in September, had been negotiating with Health Minister Martin Foley until late on Monday night.

Ms Ratnam said the Greens had secured a reduction in COVID-19 fines for young people, a commitment to review fines in disadvantaged communities and a confirmation of the right to protest.

She said the government had begun working on legislation specific to the pandemic to replace the current state of emergency powers.

Queensland has experienced wild weather overnight as a cyclone gathers speed off the north-east-coast, with 70 millimetres of rain dumped all the way down in Brisbane.

The system has this morning been upgraded from a Category 2 storm to a Cyclone Warning between Innisfail and Cape Melville - as it hovers 280km north-east of Cairns.

The Bureau of Meteorology has warned the system could intensify further before easing.

Western Australia's premier has walked back a suggestion that authorities might continue to track anyone who enters the state beyond the COVID-19 pandemic.

Mark McGowan was forced to clarify his position on Tuesday after comments made at an earlier election campaign event, where he failed to rule out the continued use of the G2G travel pass as a weapon against drug importation.

Western Australia Premier Mark McGowan has walked back a proposal to extend the state’s border controls beyond the pandemic after facing an angry backlash. pic.twitter.com/ns2KyhzvO1

Asked specifically whether incoming travellers would need to continue using the G2G pass, the premier said he couldn't predict exactly what restrictions might remain.

The premier later used another campaign event in Kalgoorlie to rule out requiring incoming travellers to give their details beyond the pandemic.

Stomach flesh found at Mollymook on the NSW south coast does not belong to missing Sydney conwoman Melissa Caddick.

NSW Police said in a statement on Tuesday afternoon the human male remains found at Mollymook on Friday belong neither to Ms Caddick nor a man who went missing from Batemans Bay on January 25.

DNA from the remains will now be tested against the missing persons database.

#BREAKING: Testing has revealed human remains found on a NSW beach after Melissa Caddick’s foot was discovered do not belong to the alleged fraudster. https://t.co/isw89OdOYd

Police are continuing to scour beaches on the NSW south coast for traces of Ms Caddick after her foot was found south of Tathra on February 21.

Additional remains were found at Cunjurong Point on Saturday afternoon and Warrain Beach at Culburra on Sunday morning.

Police said on Monday evening they would forensically examine those remains to determine if they belonged to the 49-year-old Ms Caddick.

Six Dr Seuss books - including And to Think That I Saw It on Mulberry Street and If I Ran the Zoo - will stop being published because of racist and insensitive imagery, the business that preserves and protects the author's legacy says.

"These books portray people in ways that are hurtful and wrong," Dr Seuss Enterprises told The Associated Press in a statement that coincided with the late author and illustrator's birthday.

"Ceasing sales of these books is only part of our commitment and our broader plan to ensure Dr Seuss Enterprises' catalogue represents and supports all communities and families," it said.

Dr. Seuss had a long history of publishing racist and anti-Semitic work. Now, six of his books will no longer be published because they "portray people in ways that are hurtful and wrong," the business that preserves the author's legacy says. https://t.co/XSGve2ur0d

The other books affected are McElligot's Pool, On Beyond Zebra!, Scrambled Eggs Super!, and The Cat's Quizzer.

The decision to cease publication and sales of the books was made last year after months of discussion, the company told AP.

"Dr Seuss Enterprises listened and took feedback from our audiences including teachers, academics and specialists in the field as part of our review process. We then worked with a panel of experts, including educators, to review our catalog of titles," it said.

- The Tokyo 2020 organising committee will add 12 new women to its board, more than doubling the ratio of women to 42 per cent, after its former president Yoshiro Mori stepped down last month over sexist remarks.

- This year's Rugby World Cup for women in New Zealand is set to be pushed back until 2022 because of the uncertainties surrounding the COVID-19 pandemic.

- Gunmen have freed all 279 girls kidnapped from a boarding school in northwest Nigeria.

Reply
Upvote
3 upvotes
One has to wonder exactly how many white-supremacist racists have been created due to Dr Seuss's children's stories and illustrations.
I'd hazard a guess and say none?
L
laura__palmer a year ago

Reply
Upvote
9 upvotes
@james b The amount of hyperbole I've seen around this is ridiculous. A publishing house decided to not continue to publish 6 of his least most popular titles due to outdated and racist imagery. A decision that publishing houses make all the time. The knee jerk reactions and hand wringing by conservatives has been hilarious.
G
guest2 a year ago

Reply
Upvote
2 upvotes
@laura__palmer Banning books is a bad precedence in a democracy.   Those 6 Seuss books have also been removed from Ebay, yet copies of Mein Kampf are still available and continued to be published.
C
cat a year ago

Reply
Upvote
9 upvotes
@laura__palmer no one would have even noticed these books had disappeared if not for the conservative drama.
L
laura__palmer a year ago