In 2015, a 30-year-old Michelle Payne made history as the first woman to win the Melbourne Cup in its 155 year history.

Last year, her rise to victory was turned into the inspirational Aussie film Ride Like A Girl somewhat softening - even if only for a second - the growing criticism being levelled at the horse racing industry.

Now, in a new interview on Anh Do's Brush With Fame on Tuesday night, the 35-year-old has spoken intimately about the string of tragedies that have shaped her family's life.

She was the youngest of 11 children, born on her brother Michael's birthday, who only lived three days on earth.

"That's how I got the name Michelle, named after him," she told Anh Do. "I feel really special about that."

Michelle grew up near Ballarat in Victoria, and when she was only six months old, her mother Mary died in a car crash, leaving her father Paddy to raise the Payne children by himself.

In her memoir Life As I Know It, Michelle explained that her mum had been driving some of her siblings to school when another mum on the school run crashed into the car’s driver door.

"The other kids in the car were all okay, but they don't really speak about it," Michelle told Do.

Riding out to the end with an absolute winner 🏇 @mj_payne #ABWF

Michelle’s sister Therese took on a mother figure role in her life, with The Australian reporting that she used to fall asleep at school after getting up during the night to feed her infant sister.

As a four-year-old Michelle remembers yearning for her mum – for her protection.

She wrote in her book: "My dad tells me the story that one night I was lying in bed with him and I’d decided that Mum would be the solution to my problems. She would make things right.

“Can we go and dig her up?” I asked. “Then the kids won’t pull my hair anymore.” 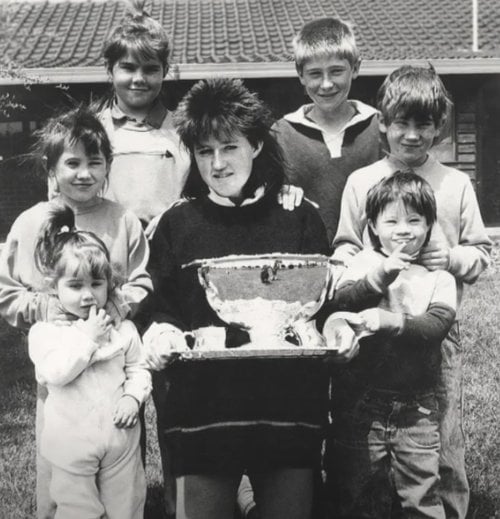 Michelle's mother died in a car crash when she was a baby. Image: ABC TV.

Speaking on Anh's Brush With Fame, she added: "I used to stand on the balcony and call out to mum to come back home. Which is heartbreaking I would imagine for my dad to hear that... he used to talk to me about her every day."

The Payne family has long been entrenched in the world of horse racing, with Michelle and seven of her siblings all going on to become jockeys. Their brother Stevie, who has Down Syndrome, became a strapper.

In 1996, racing writer Tony Kneebone wrote a book on the Paynes but Paddy warned the author at the time that it was "probably premature, because the little one is likely to end up better than the lot of them."

At the time Michelle was only 11.

From age seven, the youngest Payne was determined to one day win the Melbourne Cup, and was racing horses by the age of 15.

She had a natural talent but her career was plagued by injury - and after one particular head injury in 2004 when she was 18, her family begged her to retire.

She fell heavily during a race in Melbourne fracturing her skull and bruising her brain. It took 15 months to recover completely - she had no short term memory for two months and broke her wrist as well.

Michelle was never one for the sidelines, telling The Age not long after her accident, "I love riding so much. There is nothing worse than being on the sidelines and having to watch. I just love riding and I love the horses and when you win and the owners are all so happy, it's just...the feeling's unbelievable."

In 2007, the Payne family once again suffered tragedy, with the eldest sibling Brigid dying from a heart attack after having a seizure at the age of 36.

Doctors believed her death was linked to a fall during track work six months earlier, which left her in an induced coma.

"I got a call in the early morning that she'd had a seizure and she'd been taken to hospital, and at 6:30pm that night she went into cardiac arrest. Half an hour later they called back and said she hadn't made it. It was a numb feeling," Michelle told Anh Do's Brush With Fame.

She was tasked with telling their dad, and remembers walking into the dark stables and breaking the news to him.

"He didn't hear me the first time, and I was like 'Dad, she didn't make it she's passed away'. He kept talking and I had to say it again. He was just in shock because he still thought there was hope. All night he couldn't sleep saying 'children aren't supposed to go before you. I've lost another one'," said Michelle.

Michelle continued to throw herself into racing after her sister's sudden death, and in 2009 she won her first Group One at racing's highest level. As a result, she was offered a place in the Caulfield Cup, and was just the third female jockey to compete.

When Michelle Payne won the Melbourne Cup in 2015, she completely defied the odds. Her horse, Prince of Penzance was 100-1 in the odds prior to the race.

Speaking to Anh Do five years later, Michelle says she can remember "every step of that race. It's so embedded in my brain."

Before it started, she said a little prayer to her mum and sister and asked them to "look after me out there," and she credits the feeling of winning as being "the most incredible feeling you could ever imagine in your life."

After the victory, Michelle famously told her critics to "get stuffed" in a post-race interview.

"It’s such a chauvinistic sport, a lot of the owners wanted to kick me off. It’s a very male-dominated sport and people think we [women] are not strong enough and all of the rest of it, but it’s not all about strength. ADVERTISEMENT
Michelle's speech after her win made history. Image: Seven.

Her horse was strapped on the day by her brother Stevie, who she thanked in her speech for helping her to victory.

"Here we are the two little kids of the family on the main stage of the biggest race in Australia," she remembers thinking at the time.

"I think it’s great for other people with Down Syndrome, to see how capable they can be in normal life," she told the ABC in a later interview.

"Stevie can pretty much do anything, and look after himself when he’s on his own," she added.

Their father Paddy was equally as proud telling The Australian Stevie's triumph that day was at least as important as Michelle's win as jockey.

"I rang up the Down Syndrome Association and I said to them, ‘well this kid’s done good’ and I reckon it was because he was brought up normally with all the other kids," he told the publication.

Stevie was the only Payne to play himself in Ride Like A Girl, with director Rachel Griffiths telling Mia Freedman on No Filter they actually wrote him in more scenes after seeing how amazing he was on screen.

Rachel Griffiths chats to Mia Freedman on No Filter about Ride Like A Girl. Post continues after podcast.

After her galvanising speech at the Melbourne Cup, Michelle noticed a bit of pushback.

As she explained to Andrew Denton in an episode of Interview, "Two days later at Oakes day, there was a writeup in the paper from another rider saying I shouldn't have said that. But I totally disagreed obviously."

But overwhelmingly the reaction was one of immense support from women everywhere, with Michelle as a result being heralded as a feminist hero.

In 2016, Michelle's career again faced an injury hurdle - she was hospitalised with internal bleeding after she fell off a horse and had her stomach trampled on. She was told by the doctors she was hours away from death, with the accident severing off three quarters of her pancreas.

She returned to racing four months later, but noted that her future goals included transitioning from being a jockey to becoming a trainer.

Very comfy when they airlifted me from Mildura to The Alfred #amazingpeople ???????? syringe in the hand for dry mouth #wasntallowedmuch ????

That same year she was honoured in the Sport Australia Hall of Fame, but in 2017 she was stood down from racing for a month after testing positive for the drug Phentermine, an appetite suppressant.

Payne said after the investigation; "The onus is 100 per cent with me… I regret not seeking more guidance, I wasn’t thorough, and that is completely my fault. My sincere apologies to everyone."

She was also fined $1500 in 2017 and $300 in 2018 for comments she made on social media about the firmness of certain race day tracks, with her other public setback involving trainer Darren Weir who trained her Melbourne Cup-winning horse. The two had a falling out after he decided she was no longer the right jockey for Prince of Penzance. Weir was last year banned from racing for four years after illegal "shock devices" were found on his property.

In 2020, Michelle lives her life relatively out of the spotlight. She houses 25 horses on her farm, and trains 16 of them.

"I’m waiting for when it feels right [to retire]," she told Vogue in 2019. "I know it’s coming, but I’ve got a few dreams in mind I hope will come before then."

Training, riding and winning on a horse of her own at Royal Ascot is the ultimate dream for Michelle now, but she is also considering becoming a nurse when she eventually leaves the horse racing world.

Her other goal is to start her own family, although she told Vogue last year she's still in a new relationship so is "keeping details of her love life private for now".