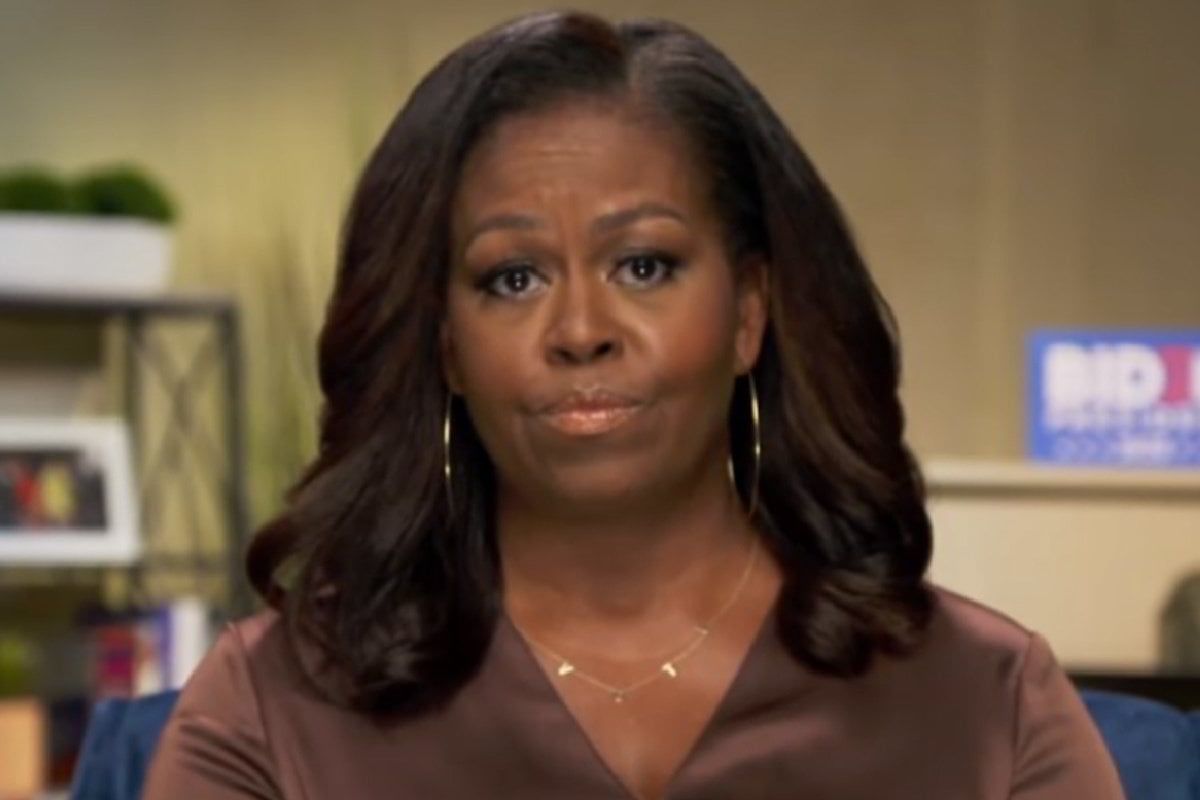 "Donald Trump is the wrong president for our country."

Michelle Obama could not have been more frank in her message during the Democratic National Convention - an event that sees the party's president and vice president be officially nominated for the November 3rd US Election.

In her typically poised and passionate manner, the former first lady delivered a powerful speech in which she declared her support for presidential nominee Joe Biden, who is Barack Obama's former Vice President.

Wearing a delicate gold necklace with the four letters V-O-T-E strung out on a chain, Michelle Obama said the upcoming election had the potential to bring about necessary change for America, who has been the worst hit country by the coronavirus pandemic in terms of case numbers and deaths. 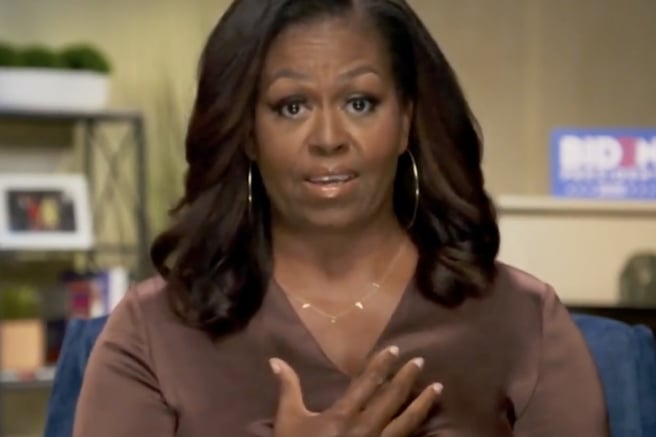 "More than 150,000 people have died, and our economy is in shambles because of a virus that this president downplayed for too long. It has left millions of people jobless. Too many have lost their health care; too many are struggling to take care of basic necessities like food and rent; too many communities have been left in the lurch to grapple with whether and how to open our schools safely."

Obama added that the state of America today is a sad display for the next generation to look up to.

"A nation that's underperforming not simply on matters of policy but on matters of character. And that's not just disappointing; it's downright infuriating," she said.

"So let me be as honest and clear as I possibly can. Donald Trump is the wrong president for our country. He has had more than enough time to prove that he can do the job, but he is clearly in over his head. He cannot meet this moment. He simply cannot be who we need him to be for us. It is what it is.

Michelle Obama had a poignant 'take home message':  "If you think things cannot possibly get worse, trust me, they can; and they will if we don't make a change in this election. If we have any hope of ending this chaos, we have got to vote for Joe Biden like our lives depend on it."

As Vanity Fair put it, Trump is having "a full-blown temper tantrum over Michelle Obama".

Following her speech, Donald Trump sent a series of tweets in desperate rebuke.

Somebody please explain to @MichelleObama that Donald J. Trump would not be here, in the beautiful White House, if it weren’t for the job done by your husband, Barack Obama. Biden was merely an afterthought, a good reason for that very late & unenthusiastic endorsement.....

....My Administration and I built the greatest economy in history, of any country, turned it off, saved millions of lives, and now am building an even greater economy than it was before. Jobs are flowing, NASDAQ is already at a record high, the rest to follow. Sit back & watch!

He then went on to criticise Barack Obama and Joe Biden's response to the H1N1 Swine Flu pandemic in 2009-2010, which killed about 12,000 Americans, compared to the current coronavirus pandemic which has so far killed more than 175,000 Americans.

Looking back into history, the response by the ObamaBiden team to the H1N1 Swine Flu was considered a weak and pathetic one. Check out the polling, it’s really bad. The big difference is that they got a free pass from the Corrupt Fake News Media!

The ObamaBiden Administration was the most corrupt in history, including the fact that they got caught SPYING ON MY CAMPAIGN, the biggest political scandal in the history of our Country. It’s called Treason, and more. Thanks for your very kind words Michelle!

The President finished his rant on Michelle Obama with a sarcastic note: "Thanks for your very kind words Michelle!"

On Tuesday, Trump doubled down on his response to the former first lady's speech.

"Well she's in over her head, and frankly, she should've made the speech live, which she didn't do. She taped it. And it was not only taped, it was taped a long time ago, because she had the wrong deaths. She didn't even mention the vice presidential candidate."

If you break down what Donald Trump said, the point he is supposedly making seems to work... against him.

Trump said, "she had the wrong deaths".

Yes, Donald Trump's best criticism of Michelle Obama's speech is the time at which she happened to record it.

Thanks for reminding us, Trump!

Reply
Upvote
Oh please! Michelle Obama’s no longer relevant. She grabbed the opportunity to slag off Donald Trump. No class! A classy person would have concentrated their speech on praising the Democratic candidate. You know, being positive and ensuring that her audience was made aware of how great Joe Biden is and why he’d make a great president. Probably an uphill battle but at least she could have tried.
Instead, she followed the standard Democrat line of drawing attention to what they see as Trump’s failures. I’ve been following world politics for almost 60 years and I’ve never seen anything as disgusting as the behaviour of the Democrats for the last four years. Do they have any policies? The only one I’m aware of is the Green New Deal and god knows I’ve been keeping my eyes and ears open. You can’t run a country on one policy.
When I see the Democrats and their hangers on concentrating on running their campaign by telling us their policies, concentrating on how good they are and staying away from trying to score cheap points by carping on Trump’s perceived failures, I’ll begin to take them seriously.
G
guest2 2 years ago

Reply
Upvote
@birdie The Green Deal, Medicare for all, no borders, a comprehensive welfare system - these are the policies usually sprouted.   The billionaires and trillionaires will pay for those policies, but a realist knows itmis the disappearing middle class that usually stumps up the money.
C
cat 2 years ago

Reply
Upvote
3 upvotes
@birdie talk about double standards- Trump does nothing but criticise other people, except his criticism is in the form of mockery, lies and unfounded allegations. And aside from that wall he never built, I can’t think of a single policy he’s had.
Trump is very unpopular, why wouldn’t the Democrats emphasise that at this election?
S
salemsaberhagen 2 years ago

Reply
Upvote
1 upvotes
@birdie Are you serious? Trump is slagging of the Democrats and his opponents for 4 years.  No class coming from him.  I have been observing world politics for many decades myself and NEVER have I seen a more immoral, abusive, classless, hateful and disgustingly behaved administration than Trumps.  Its almost as if you have ignored Trump's disgusting behaviour and the disgusting behaviour of his administration.
M
michael 2 years ago

Reply
Upvote
1 upvotes
The democrats would be worse. Thats for sure
L
laura__palmer 2 years ago