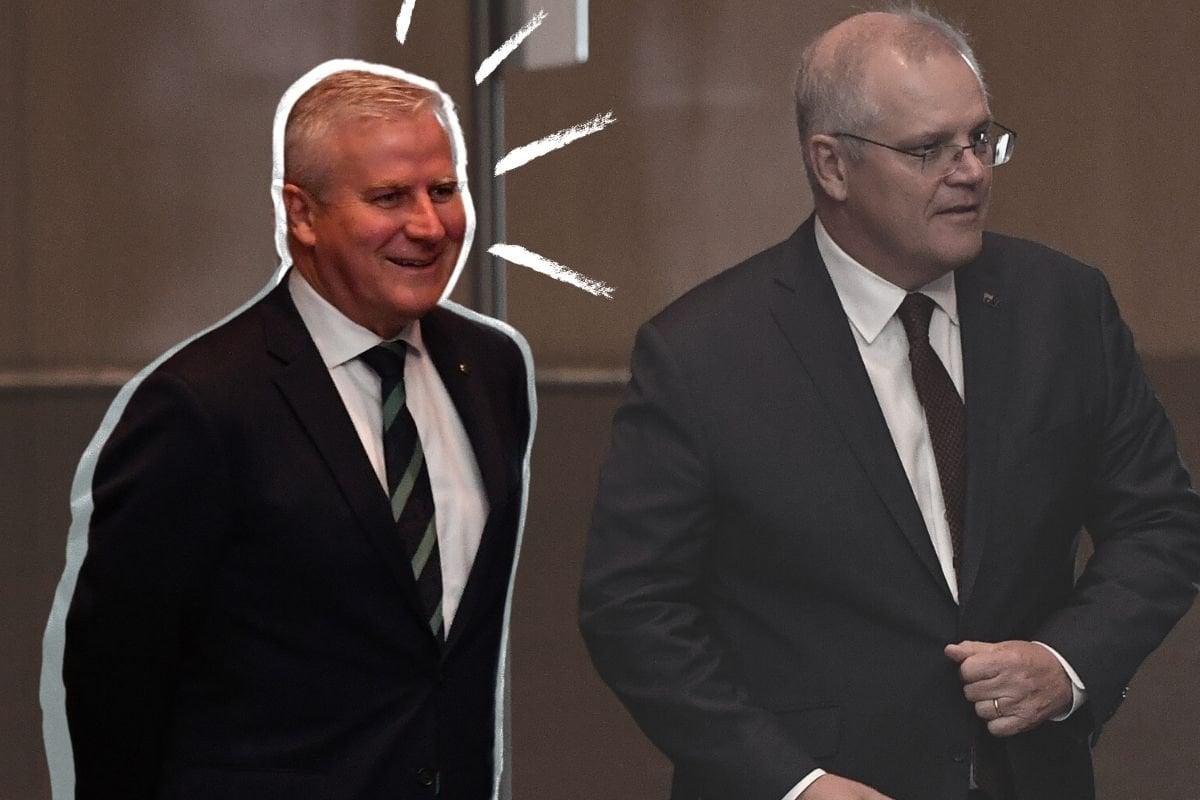 Prime Minister Scott Morrison thought he'd finally earned himself a restful week off with his family.

If you'll cast your mind back to December 2019, you'll remember that our leader whisked his family off for a sneaky little break in Hawaii while Australia was in the midst of one of its worst bushfire seasons on record.

It wasn't received very well... as you might recall.

Watch: Michael McCormack is filling in for Morrison, and he's already stirring up controversy. Post continues after video.

But in 2021, Morrison wasn't going to repeat the same mistake. On Monday he announced a week-long holiday from the top job in writing.

"I will be on official leave this week until Monday January 18. During my short absence, the Deputy Prime Minister Michael McCormack will be the Acting Prime Minister and undertake my duties during this period," he wrote in an official statement.

"There, done and done," we imagine the prime minister mumbling to himself as he packed up the family car ready to put the year that was behind him with a good ol' relax.

But in just two days, the man he's put in charge is already making headlines - multiple headlines - for all the wrong reasons.

It started with the Capitol Hill comments.

On Monday morning, McCormack appeared on ABC's RN where he was asked about the riot that occurred on Capitol Hill the previous Thursday.

He called the violence "unfortunate", and "similar to those race riots that we saw around the country last year".

"It is appalling that our national leadership views the Australia BLM protests that were conducted in 2020 as "race riots" when they were peaceful protests to call out the ongoing injustice of Indigenous deaths in custody," said Professor Jacinta Elston, Pro-Vice-Chancellor at Monash University.

It is appalling that our national leadership views the Australia #BLM protests that were conducted in 2020 as "race riots" when they were all peaceful protests to call out the ongoing injustice of Indigenous deaths in custody https://t.co/VTRX04ie41

But on Tuesday, despite the backlash, McCormack doubled down insisting there are similarities and there is no need to withdraw his comments.

"I know this is very difficult for the United States as it goes through great change but any form of protest, whether it is a protest over racial rights or indeed what we have seen on Capitol Hill in recent days it is condemned and abhorred," he told ABC News Breakfast.

Whiteness is all about erasing the obvious and erecting another reality in its place. Case in point: how the violence that sparked the BLM protests in the first place is completely disappeared. https://t.co/ss6TD68v8w

While talking to 2GB Radio, he added that groups including Amnesty International who called his comparison "deeply offensive" were just "feigning indignation."

"If I've affected their precious feelings, well I'm sorry that they are so visibly upset by it, but seriously?" he said.

"I'm concentrating on rebuilding the economy and the health outcomes of Australians, not worrying about what is a bit of a circus in America."

Then he condemned Twitter's censorship of Trump...

On Tuesday morning during the chat with ABC News Breakfast, McCormack was asked about Trump's role in the Capitol Hill riots and the subsequent removal of the President of the United States from all major social media platforms.

McCormack said he was not in favour of censorship and supported free speech, accusing Twitter of double standards over China.

"Facts are sometimes contentious and what you might think is right, somebody else might think is completely untrue." he said. "That is part of living in a democratic country."

"I would say to the owners of Twitter, if you're going to take down the comments of who is still the American President you need to think also about the photo, the doctored image, which shows a soldier, supposedly an Australian digger with a child in his arms, about to do harm to that child," he told the ABC.

He pointed to the "102,000 names on the war memorial in Canberra" fighting for every free-born person’s right to uphold that freedom of speech.

Very weird to hear McCormack talk about how we “fought two world wars for the right to protest”. Australia famously has no enshrined right to assembly. Hard to argue WW1 was about fundamental human rights, and WW2 was against the Nazis... who McCormack is now equating to BLM.

When asked if President Trump had helped incite the riots with inflammatory remarks on social media and elsewhere he said some of the remarks were "unfortunate" but any question over whether he should be impeached was a matter for the US. Australia's condemnation - or lack thereof - has been criticised in comparison to other world leaders.

McCormack also refused to criticise Coalition backbencher George Christensen after he sparked controversy peddling conspiracy theories over voter fraud in the US, telling the Today Show the Nationals Leader is "the voice of the north".

“George Christensen is a free spirit. While George might sometimes push the boundaries of controversy on social media he also sticks very much up for communities such as this one,” he said.

Then there were the comments about the cricket.

On Sunday afternoon six men were removed from the crowd at the SCG after a second day of racist abuse directed towards the Indian team during the third Test.

McCormack said there was "no place" for racism in Australian sport, but then added that he hoped the events "would not distract the Australian team."

"If racist remarks have been made, then the appropriate action has taken place," he said in a statement before pivoting to, "Australia’s performance in this Test so far has been very solid – the team won’t be distracted by this as it pushes on to victory."

Oh great. The acting Prime Minister felt it necessary to point out he hopes claims of racism at the SCG won’t distract Australia’s push for victory in the Test.

Why would a country’s leader even feel the need to have that in a statement?

And today, the deputy PM is making headlines for his comments on unemployment.

On Tuesday McCormack called on unemployed Australians in metropolitan centres to "turn off Netflix and Stan" and get a job in regional Australia.

McCormack shrugged off suggestions it was insulting to call some unemployed Australians "lounge lizards."

"I say to those people who perhaps have done reasonably well off JobSeeker, who may have earnt more than they could have dreamt of, it is perhaps time to turn the Stan and Netflix off, [and] to come to the regions [where] you can have a better life," he said.

So much for a restful, drama free holiday, Scott.

Reply
Upvote
MCormack’s idea of free speech means then we can openly call out Conservatives in the Coalition as backward dinosaurs who would be very upset about the demise of Trump and his Republican enablers. Now we just need Australian voters, especially women, to see that our Conservative coalition is much the same, stuck in the past at a time when a future planetary focus is needed more than ever.

james b 5 months ago