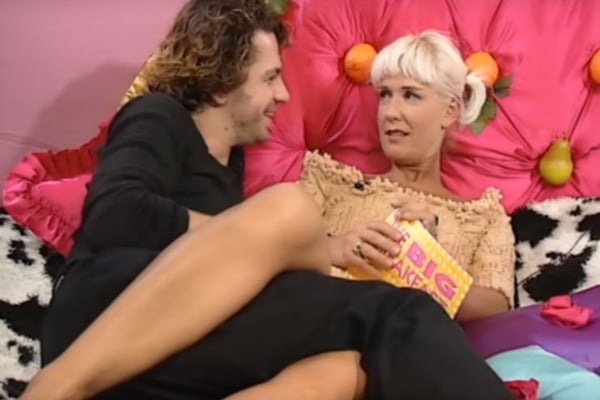 The British rock journalist and television presenter, who was known for her work on The Tube and morning program The Big Breakfast, was thrust into the spotlight in 1977 when she began dating Bob Geldof, the frontman of The Boomtown Rats.

Yates was an obsessed fan of The Boomtown Rats, who was determined to have the band’s frontman. She began dating Geldof at just 18 years old, when she flew to Paris to surprise the singer while the band were performing there.

In the years that followed, the young couple quickly became one of the most fashionable couples of the decade, appearing on countless magazine covers and red carpets.

But behind the scenes, the couple’s relationship wasn’t quite so glamorous.

Despite sharing three children together – Fifi, born in 1983, Peaches, born in 1989, and Pixie, born in 1990 – the couple’s marriage was shrouded by persistent rumours of Geldof’s infidelity and from a number of interviews, it was clear the pair had different expectations about the role of passion in their relationship.

“To live your life in a state of passion would be tedious because everything is distorted,” Geldof once said in an interview. “Sexual passion burns out.”

In the end, despite the persistent rumours about Geldof, it was Yates who strayed from the marriage. She had found her new source of passion.

Yates first met the Australian performer in 1985, one year before she married Geldof after 10 years together, during an interview for Channel 4's rock magazine show The Tube.

At the time, according to Anthony Bozza in INXS Story to Story: The Official Autobiography, Yates walked up to the road manager of INXS and told him: "I'm going to have that boy".

The road manager told Yates to leave Hutchence alone, but she was undeterred.

"He was so breathtakingly beautiful it made me feel quite feeble," Yates later said of their first meeting in 1985.

"I mainly interviewed Michael's crotch and at the end he asked me back to his hotel room. I said, 'Crikey, no, I've got a baby'."

Over the course of the next nine years, Yates maintained irregular contact with Hutchence, often appearing at INXS concerts with her young daughter Fifi on her hip.

She even reportedly had pictures of Hutchence on her fridge, which Geldof defaced.

By 1994, Yates was two decades deep into her relationship with her then husband Geldof. Hutchence, on the other hand, was dating supermodel Helena Christensen.

In October that same year, Yates interviewed Hutchence once again, this time on the Big Breakfast.

The morning show involved Yates interviewing musicians and celebrities on a cow-print bed. But this time around, the interview was very different.

From the moment the interview began, the chemistry between the pair was undeniable.

Lying on the bed with their legs intertwined, the pair giggled like teenagers as they both made small digs at each other's partner.

A month after Yates and her three daughters had moved out of Geldof's home, unbeknownst to Hutchence, Yates tipped off the press before heading out to dinner with the INXS performer. The couple were surrounded in the restaurant by tabloid reporters and the night ended with Hutchence taking a swing at a photographer.

In May 1996, Yates finalised her divorce from Geldof and on the 22nd of July that same year, Yates and Hutchence welcomed their only daughter together – Heavenly Hiraani Tiger Lily Hutchence.

It was a change in their lives that Hutchence reportedly struggled to deal with.

"The first months when the practicalities of life came along, when the novelty wears off, Michael couldn’t handle that," close friend Richard Lowenstein said.

"Michael was never – not even in Paula’s wildest dreams – going to be that domestic person. When they were living close to Nick Cave he would say, ‘I’m going to see Nick...’ and do nothing but bitch about the missus and the family. Anyone who thought Michael was going to be this tame, domestic hubby with the kids was just kidding themselves."

Just a few months after Tiger Lily was born, a nanny discovered a tube of lollies that contained opium and heroin under the couple's bed.

The couple claimed that the tube had been planted, but the next month Geldof gained custody of Fifi, Peaches and Pixie.

"He was on Prozac and being treated for depression on account of all the money he was spending and the problems with Paula and Bob," Hutchence's brother Rhett Hutchence claimed.

"When he started finding out how much it was costing him to be with her, I think he wanted to separate."

On November 22, 1997, Hutchence ended his own life in a hotel room in Sydney. At the time, Hutchence's daughter, Tiger Lily, was just 16 months old.

On the day of Hutchence's death, Yates was in court fighting for permission to take all of her children to Australia to be with Hutchence during a three month INXS tour. The judge refused.

Yates recalled walking from the courtroom and turning to her solicitor, saying, "This will kill Michael".

After learning of Hutchence's death, Yates and Tiger Lily got straight on a plane to be with him.

"I spent a long time with him. I just kept trying to look after him. [Tiger] talked to him. It was the most private time I'll ever have with Michael, ever. I would have taken him home with me. But it's all so strange because your automatic reaction is to want to make it better and you can't make it better; you can't do anything. The powerlessness is just unimaginable," she said in an interview with the Australian Women's Weekly in 1998.

"When Michael died I was tipped over the edge. I was beyond grief. I went completely mad," she later said in another interview.

In June 1998, Yates' life fell apart even more when she lost custody of her three daughters from her relationship with Geldof. At the time, she tried to end her life but a friend found her and she was admitted to a psychiatric hospital.

Two years later, after beginning an affair with a heroin addict, Yates passed away at 41, from a heroin overdose.

At just four years old, Tiger Lily was an orphan – and one of the world's most famous orphans at that.

Although Hutchence's mother and sister fought to have Tiger Lily live with them in Australia, the young girl was controversially adopted by Geldof.

She is now 22 years old and largely stays away from the spotlight.