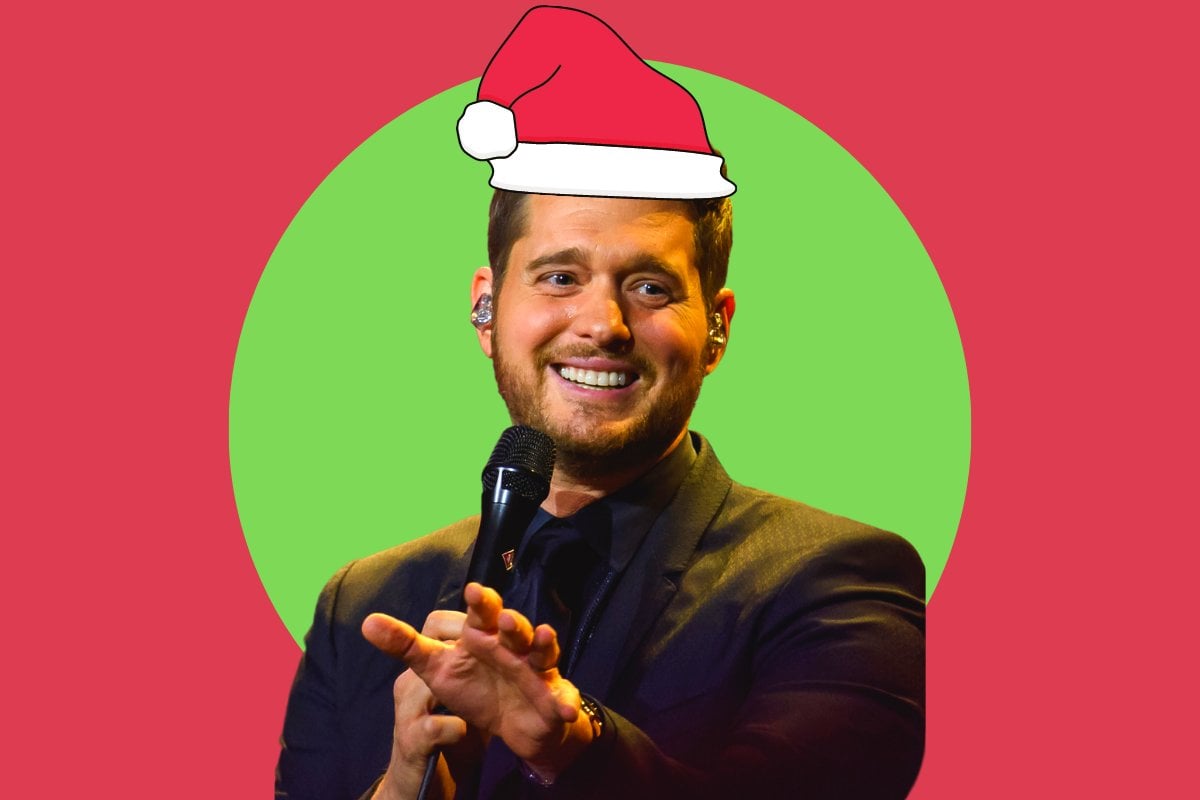 At this time of year, it's hard to avoid Michael Bublé.

His voice is everywhere; on your radio, at the shops, in all those Christmas playlists Spotify keeps trying to get you to listen to.

And you're probably not that mad about it. Because as the meme goes, December means Bublé emerges from his hibernation cave, ready to serenade you with "Chriiiiistmaaaas, the snow's coming down" (it's not, Michael, we live in Australia - but who are we to burst his glorious holiday bubble?).

Side note: Here are the things Aussies never say at Christmas. Post continues below video.

Bublé himself has gone on record to say he's not actually that keen on the King of Christmas title, but at this point it's so well cemented there's no chance he can get out of it.

He released a festive EP Let It Snow in 2003, but the album we all know so well (especially retail workers) is his Christmas album, titled... Christmas, released in 2011.

It was actually his fifth album, with his career starting decades earlier with a talent show, reality TV appearances and a chance encounter with a Canadian Prime Minister.

At age 18, Bublé, from Burnaby near Vancouver, entered a local talent contest and won, but was disqualified for being underage. Instead, the content organiser entered him in the Canadian Youth Talent Search - which he won.

For seven years after this, Bublé performed wherever he could including clubs, conventions, cruise ships, hotel lounges and shopping malls.

In 1996, Bublé appeared in a rogue TV movie called Death Game and in two episodes of The X-Files as an (un-credited) member of a submarine crew. In 1997, he became a regular guest and performer on a Canadian talk show.

But then Bublé, now 46, performed at a business party where Michael McSweeney, an aide to former Prime Minister Brian Mulroney, happened to be.

Impressed, McSweeney asked Bublé for a copy of his self-funded independent album which he showed to Mulroney and his wife.

The former PM enjoyed it enough to invite Bublé to sing at his daughter's wedding - attended by multi-Grammy Award-winning producer and record executive David Foster. Foster didn't know how to market Bublé's jazz sound and was initially reluctant to sign him, but after the singer moved to Los Angeles and raised $500,000 to cover production costs, Foster relented.

Foster's reservations were unwarranted, with the album becoming a worldwide hit and commercial success.

He released three other albums between 2005-2009 and during this time broke up with his long-time partner, actress Debbie Timuss in November 2005.

That same year, he attended the Logie Awards in Melbourne. It was here he met British actress Emily Blunt - but both were in relationships at the time. 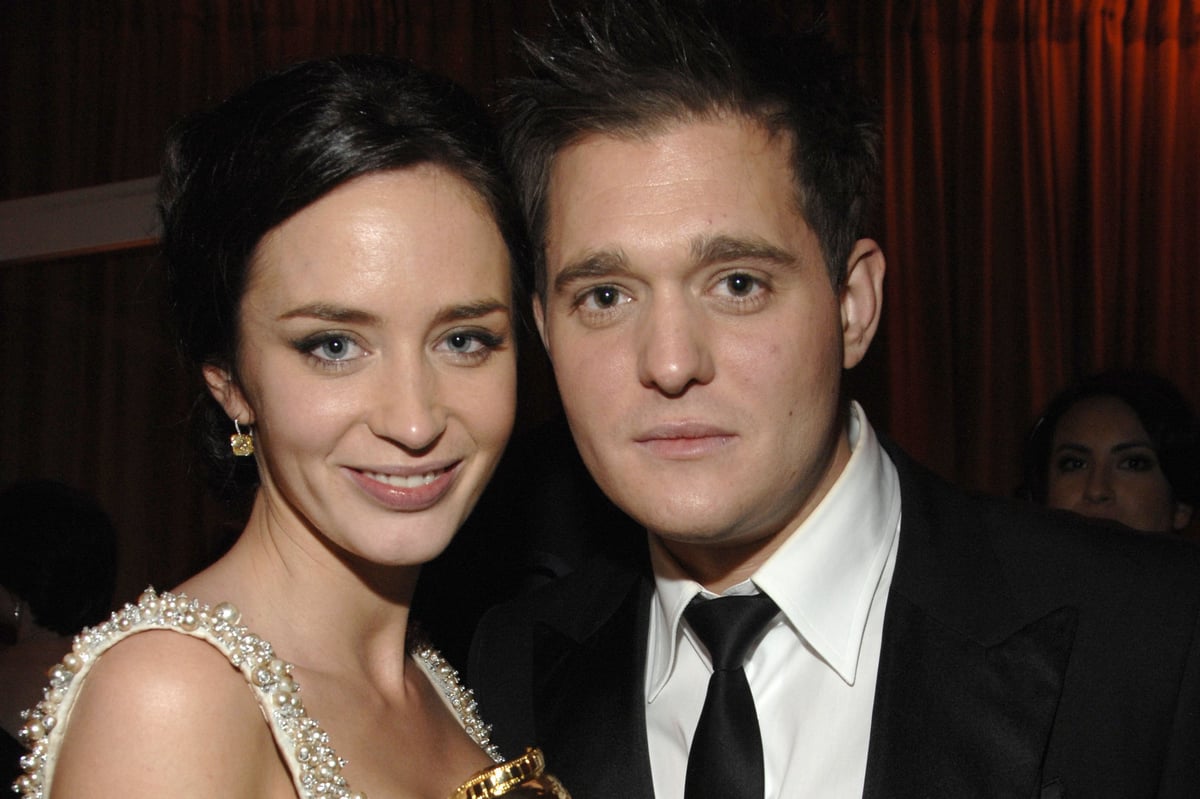 A few months later, both were single and Blunt found herself backstage at a Michael Bublé show.

In 2007, Bublé told The Times they hit it off very quickly.

"I tried to move slow because we'd both just come through break-ups but the truth is I was pretty much instantly infatuated.

"I mean, forgetting for a moment how beautiful she is, she's got this wonderful personality and... Anyway. Because I was very quickly so crazy about Emily, it felt like there was a lot riding on how it went when I first met her parents."

They broke up in 2008, and Blunt went on to be one half of... pretty much everyone's favourite couple, when she married John Krasinski in 2010. 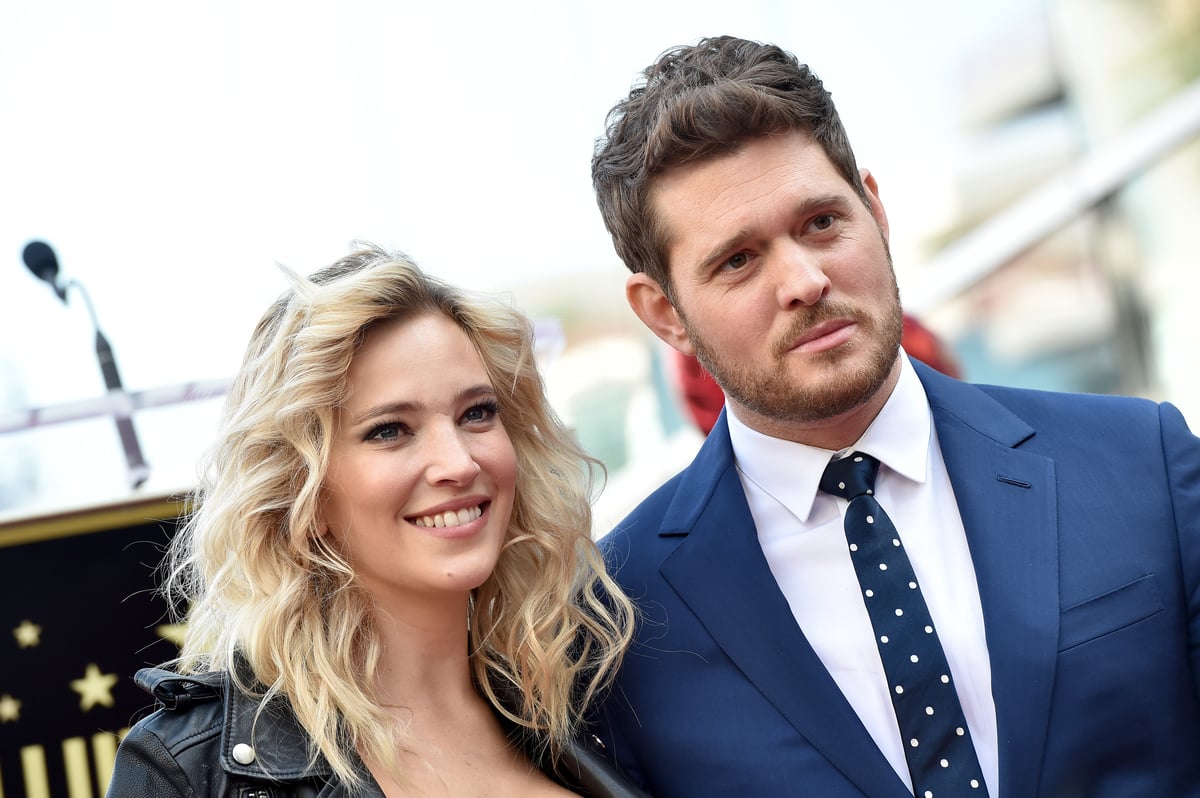 Lopilato attended a 2009 concert of Bublé's in Buenos Aires, when he saw her in the car park of the arena.

It just so happened that she was going to the same after-party as him, where they first met.

"Luisana was with a beautiful (male) friend, a movie star and when they came together, I thought they were together and I didn't want to be rude and hit on her so I spoke to him," Michael remembered in an interview on Spanish talk show El Hormiguero.

"And I was very nice and tried to find out if they were a couple, but I got very drunk, so finally I said to him, 'You know, your girlfriend is very beautiful', and he replied, 'No, she is not my girlfriend, she is into you'.

"And I thought, OK, I have a chance," he recalled.

"My happiness is to be embedded with these two and they’re my whole world, so the truth is I wouldn’t be happy without them," Bublé told People in 2015.

"I find no fulfillment being that Hollywood story that you hear about; that artist who leaves his family on a search for the perfect career. That won't happen here.

"There will have to be a healthy balance and if there's not, then only one thing is going to have to have to suffer, and let me tell you it won’t be my family life.

In 2013, he and Lopilato announced the birth of their second son, Elias.

Later that year, the couple shared that Noah had been diagnosed with liver cancer at just three.

"We are devastated about the recent cancer diagnosis of our oldest son Noah who is currently undergoing treatment in the US," the singer said a statement on Facebook.

"We have always been very vocal about the importance of family and the love we have for our children. Luisana and I have put our careers on hold in order to devote all our time and attention to helping Noah get well."

Bublé cancelled the entirety of his unannounced tour and dedicated all of his time to helping Noah through chemotherapy and radiotherapy.

Thankfully Noah is now in remission, and in 2018 Bublé returned to performing.

"I truly thought I would never go back [to music]. I was done. It just seemed completely unimportant compared to what was going on with Noah," he told Stellar in 2018.

"I thought I had pretty good perspective; I think I've always been a pretty nice guy. I probably made the same mistakes anybody else had. But, man, suddenly there was great clarity," he added. "Things got very clear for me, very quickly. I live with no fear now. I've been to hell."

He told Today that same year there were times the family wish they hadn't woken up that day.

"There were a million times that my wife and I were just surviving, struggling to survive, and to breathe," he said.

"I much rather would have it have been me. Many times I wish that it had been."

In September 2018, Bublé and Lopilato had their third child, a daughter named Vida.

Around the same time, Bublé shocked everyone when he made a major admission.

He regretted making his much-loved Christmas album, which made him so synonymous with Christmas there is a meme that circulates every year, around November, of him emerging from a cave or hibernation. 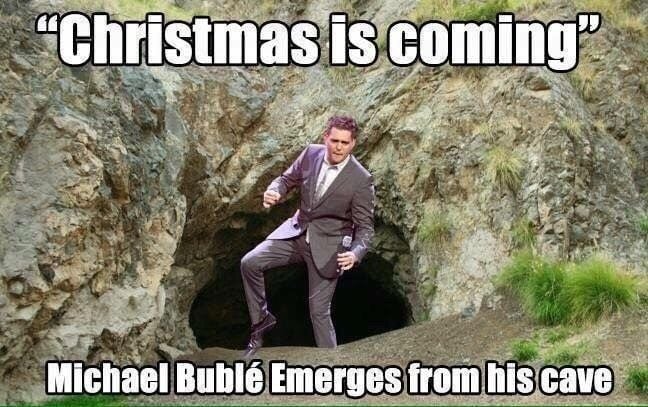 He admitted on The Graham Norton Show that he sort of... hated it.

"You notice I don't find that as funny as everybody else?"

"Do you know how many asshole friends I have that think that I haven't [seen it] and send me it and go, 'Look at the meme they have!'

He said he somewhat regretted the album, because now there "really are" people who think he lives in a cave. But it's not all bad.

More recently, he has leaned into the jokes a little more, making fun of them (and also... himself) in the process.

You heard the man.

This article was originally published on December 24, 2020 and has been updated.

Reply
Upvote
1 upvotes
You know that Bublé's remarks on Graham Norton were a joke, yeah? In that segment Norton also shares the fact that Bublé's album has been the No. 1 Christmas album in Australia every year since he released it in 2011, and Michael makes a joke about the money he makes from it 😃. My wife and I have been to his last 3 concerts in Sydney and she followed Bublé and Lopilato's Facebook livestream during isolation, and he loves Australia - he appreciates the fact that we 'get' him: his sense of humour and his music. We gave him his first #1 album anywhere in the world.
Resources
Very Peri
Skin
News
General
Opinion
True Crime
Politics
Sport
Explainer
Entertainment
Celebrity
Reality TV
Movies
TV
Books
Rogue
Royal
Lifestyle
Beauty
Fashion
Weddings
Home
Wellness
Health
Fitness
Travel
Food
Family
Before The Bump
Pregnancy
Baby
Kids
Teens
School
Parent Opinion
Work & Money
Money
Finance
Career
Lady Startup