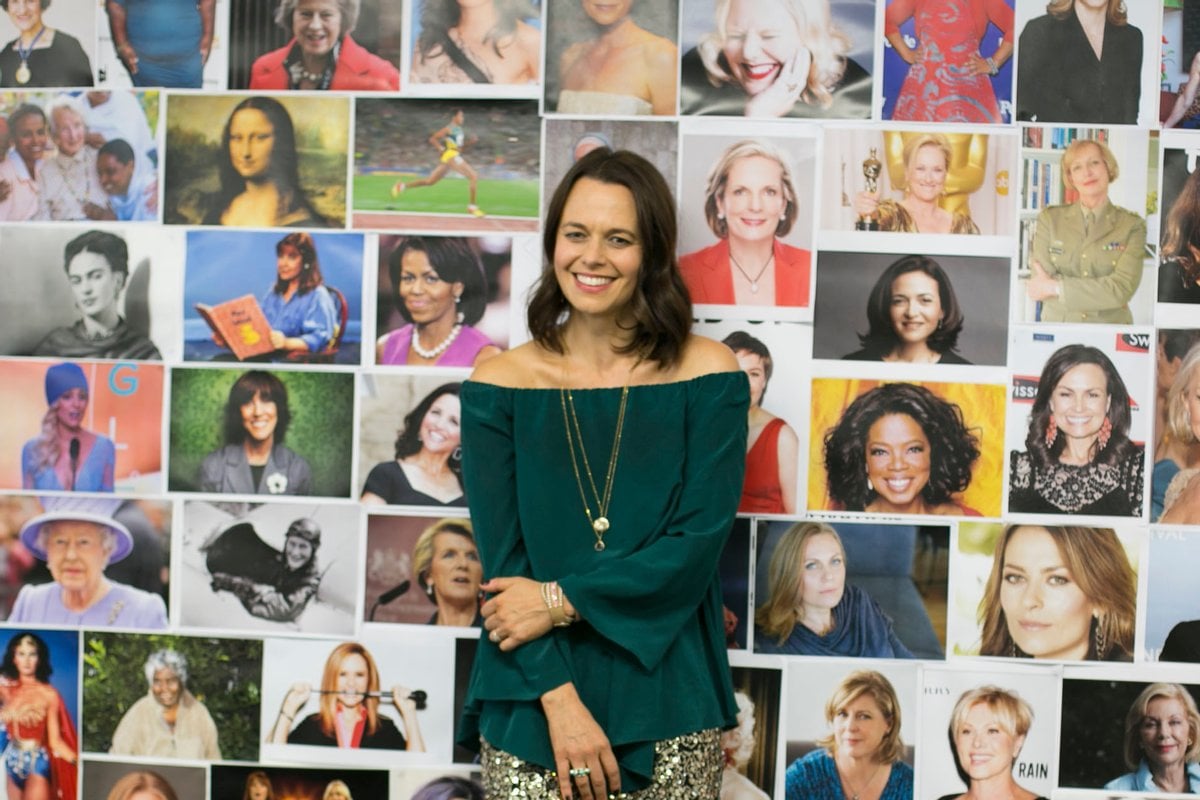 I’m watching six of the most powerful, successful and brilliant female comedy actors in the world sitting around a table. They are lit beautifully. They are also all beautiful. Incredibly so.

They all star in award-winning TV shows. Two of them also write and direct their shows as well as starring in them and they’ve been brought together by The Hollywood Reporter for a roundtable to talk about their work.

I know their actual ages range from 30 to 50 because I looked it up, but they all look to be in their early 30s.

The largest woman is around size 10, the rest appear to be size 6-8. They are styled in a palette of flattering, nude and blush tones that compliment their immaculate hair and makeup, no doubt after having spent at least two hours in a chair having it professionally done before the shoot.

Their job, you know, isn’t just to be brilliant actors, they also have to look exceptionally pleasing to the eye of viewers. And they all do.

The interviewer takes a breath. “I want you each to tell me the worst, most humiliating thing that has ever happened to you as a performer.”

The women laugh nervously and widen their eyes, all instantly reliving those moments that made them feel the smallest. The worst. The most mortified.

One woman describes doing a scene where her modesty patch slipped off and her male co-star was ‘forced’ to look at her pubic area. Another tells a story about how her size 10 feet were too big to fit into the shoes that had been provided. A third cringes visibly as she explains how she’d had to wear fake braces for a role and when they were taken out, she kept accidentally drooling. The next woman describes having to do a scene with a male actor who was shorter than her and instead of getting a box for him, the director made someone dig a hole for the actress to stand in because she was ‘too’ tall.

So essentially, the most embarrassing moments in the professional lives of these exceptional women are all about their bodies or bodily functions not conforming to beauty standards.

Curious, I flick to the next video which is a roundtable with their male equivalent - six of the most powerful and successful men in comedy shows.

Before anyone even speaks, the first thing I register is how different they look - to each other and, as a group, to the female actors. The oldest actor is in his late seventies, two are well into their 60s, two actors are African-American, one is Pakistani-American and they are all a wide range of shapes, heights and sizes. Not one of them looks younger than their actual age.

‘Craggy’, ‘weathered’, ‘lived-in’ and ‘full of character’ are how you would describe their faces.

They wear all kinds of different clothes and not one of them looks like he has spent two hours being groomed pre-shoot.

When the men are asked the same question about embarrassing moments, one actor tells a story about being in a play with a female cast mate “who was always on a diet”. As the other men snigger at this, clearly familiar with the way actresses are always on diets, the actor describes how he’d been about to shoot a love scene with the woman and she’d farted.

Just to recap, the most humiliating moment in his man’s long career is that time his starving co-star farted.

I feel sad in that moment. And frustrated and not a little pissed off.

The tax that women must pay in terms of taming our bodies, conforming to narrow beauty standards, fighting to look younger, thinner, sexier…. not only do men not have to pay it, they’re not even aware of it.

The money and time we have to spend and the internal angst we experience are invisible to them.

Every year it happens. On International Women’s Day, some bloviating male columnist who desperately needs some attention, will write about how it’s not fair that there’s no International Men’s Day.

You could argue that every day is International Men’s Day. Men still dominate the powerful positions in every profession from politics to pop. The gender wage gap continues to disadvantage women to the tune of billions of dollars a year globally.

And women are still being killed every day by their male partners or former partners. More than one woman every week is dying this way in Australia alone.

Today, across the media you’ll be hearing a lot about women. Most media organisations do something to acknowledge women on this day, unlike here at Mamamia where every day is International Women’s Day.

As the only women’s media company here in Australia, women aren’t a line item in a spreadsheet for us. Or a ‘demographic’. Women are our core purpose. Our everything. 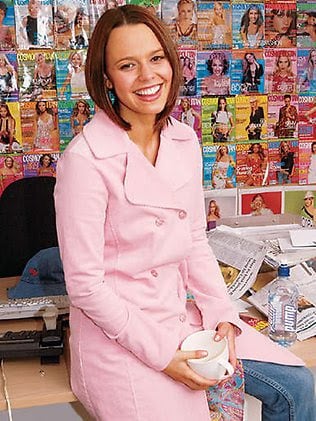 That used to mean magazines. Today it means digital and podcasts - we reach more than seven million women every month.

But I’m here to tell you that it has never been a better time to be a woman. Literally, never.

That doesn’t mean our work is done or that feminism is redundant, because clearly it is not.

We all live them. Every day.

And as I tell my daughter - and my sons - I will never stop fighting to close those equality gaps.

But today, I want to tell you about what I’ve noticed has changed.

One of my first jobs was as a waitress and I was regularly pinched on the bum by male customers. In my next hospitality job, my boss used to corner me in the kitchen and pin me up against the wall while he said disgusting sexual things to me.

At the time, it never occurred to me to tell anyone about any of those things.

It’s just what happened to women at work. All the time.

In my teens and early twenties, I didn’t know words like sexual harassment or emotional abuse. I didn’t understand what consent really was. My friends and I would sometimes warn each other about men who were gross or handsy, we rolled our eyes about the gropers and the sleazebags but we had no words - let alone tools or laws - to stop men from touching us if they felt like it.

We didn’t understand concepts like coercive control or gaslighting or emotional abuse. We thought that abuse meant someone hitting you. Even while we experienced abuse on a very wide spectrum, we didn’t recognise that’s what it was. We know now. We have the words and society is beginning to understand the insidious, pervasive and damaging effects of abuse that leaves no physical trace. Things are better than they were because we know more and society has changed. Police no longer refer to family violence as ‘a domestic’.

Women are no longer able to be legally raped by their husbands. Yes, this was the case in every Australian state until 1976 when it was made a crime in South Australia. Slowly, other states followed. The NT as recently as 1994.

For my mother’s generation, things were so much worse. Not only was rape within marriage legal and the concept of ‘date rape’ non-existent, abortion was illegal and so was contraception - because perversely, doctors could only prescribe The Pill to married women.

There was no such thing as part-time work or paid parental leave and she wasn’t allowed to work in the public service after she got married because it was assumed married women didn’t ‘need’ to work. That’s what husbands did. Nor would women want to work because they would just focus on having babies and taking care of them. That’s what wives did.

When my mother separated from her husband in the 1960s, she risked losing custody of her toddler because the law stated that an unmarried woman who spent more than an hour alone with a man was an unfit mother.

For my grandmothers, it was worse again. Their lives and choices were narrower still. Neither of them ever got their driver's licence or worked outside the home. I don’t know much about the lives of my great grandmothers but I do know that they had absolutely no autonomy over their bodies, their finances and almost no opportunity to do paid work. And so it went for generations.

In some countries, it remains the case today. Even in Texas and some other US states, women still don’t have bodily autonomy because abortion is practically illegal.

In Australia, our lives would be unrecognisable to our great grandmothers.

The past few years alone has been extraordinary in terms of progress. The #MeToo movement has been a global reckoning of untold magnitude. A sexual assault survivor was named Australian Of The Year. Women in Saudi Arabia were permitted to drive. Abortion was decriminalised in most Australian states. We had our first female prime minister and many female premiers.

Sometimes it can feel like there’s a reluctance to acknowledge progress lest it spark complacency. At the same time, I think it’s important to feel empowered by the progress of our mothers and sisters and brothers who have fought for equality, respect, safety and respect.

The work of feminism and feminists - for women to simply have the same rights as men, including the right to not be murdered by our partners or former partners - is not done yet.

But we are making progress.

Reply
Upvote
I dunno, as a man noticing the rapid change in the relationships between men and women, the changes in law and attitudes and even my workplace (I started in an environment where 1 in 40 managers were women to now 70% of the managers all the way and including the top job in my organisation are women) I feel that conditions are better now for both men and women.  My experience is,  yes at stages we men had to feel uncomfortable confused and frustrated, that feminism has liberated everyone from their traditional roles set in stone by patriarchy and that the whole society has benefited.  My sons would agree and I am excited about the opportunities for our grandchildren male and female.
A
anon- 3 months ago

Reply
Upvote
It's actually really easy to shut down any gripes about there not being an International Men's Day- because there is already one.  It's on November 19.  Also, whilst not disputing the sentiment of the opening of this article, I respectfully disagree that all of the women mentioned look like they're in their early 30s or are a size 10 at maximum.  They look fabulous, to be sure, and younger than their actual ages, but some do look much older than early 30s.
News
General
Opinion
True Crime
Politics
Sport
Explainer
Entertainment
Celebrity
Reality TV
Movies
TV
Books
Rogue
Royal
Lifestyle
Beauty
Fashion
Weddings
Home
Wellness
Health
Fitness
Travel
Food
Parents
Before The Bump
Pregnancy
Baby
Kids
Teens
School
Parent Opinion
Work & Money
Money
Finance
Career
Lady Startup
Relationships
Sex
Dating
Separation
Friendship
Family
Real Life
Couples