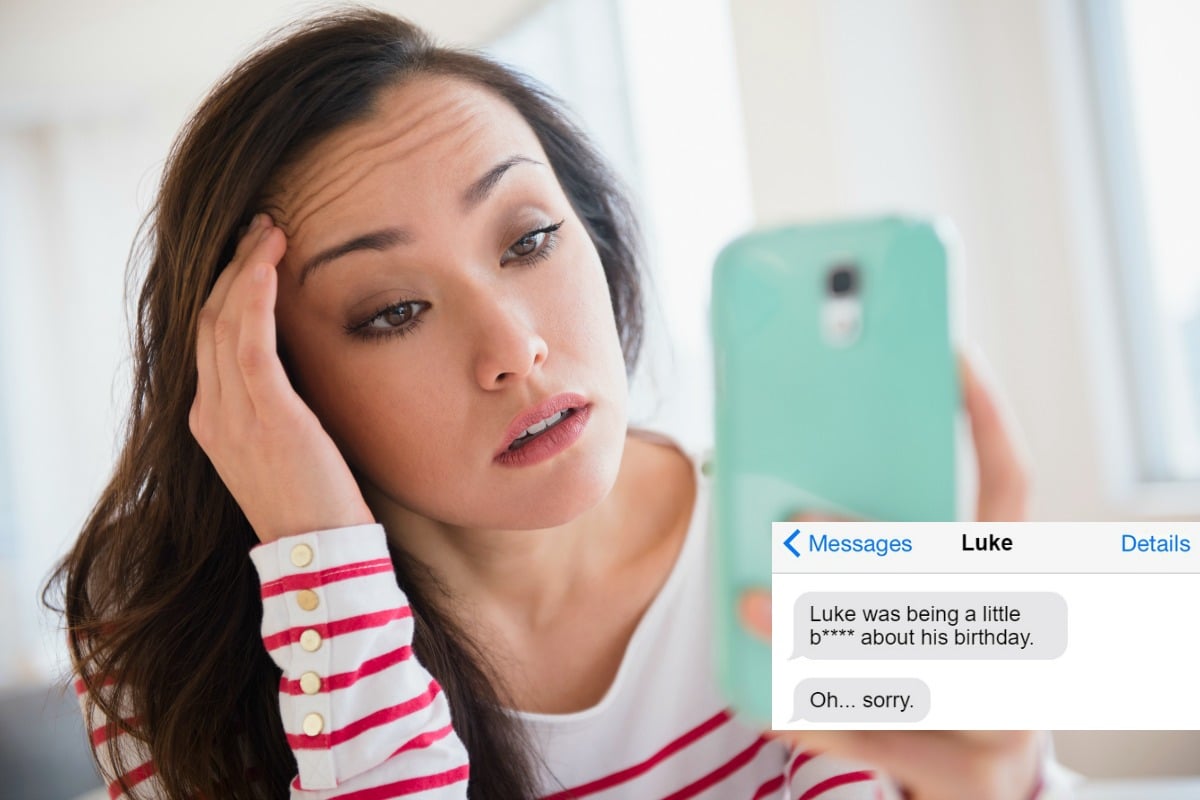 Whether it’s a simple slip of the thumb or accidentally hitting the dreaded ‘reply all’ button on your work email, sending a message to the wrong person happens more often than it should. And we can all agree, it’s a living nightmare.

Should I just pretend it didn’t happen and wait for them to bring it up? Should I just laugh it off as a joke? Should I say someone stole my phone and they sent the message? Should I block their number, quit my job and leave the country? These are just some of the questions that might first enter your thoughts. But after the initial wave of panic is over, sometimes you can find that a simple messaging blunder can actually work out for the best. Well, sometimes.

10 women shared with Mamamia the biggest messaging mistakes they’ve ever made.

The one who accidentally texted her boyfriend about the ‘hot guy’ at the bar.

“When things were really rocky with my ex, I was in an airport bar and this really hot guy bought me a drink and we talked for a bit. After he went to catch his flight, I texted a friend saying I’d just had a drink with a really hot guy and it made me realise how bad things were with my ex because I never would have done that when things were good between us. Then I sent it to my boyfriend, instead of my friend.

“I had to be honest about it because there was no ambiguity in the message. But I tried to give it a positive spin, saying it had made me realise I wanted to work on things etc. He was pretty hurt – which is fair.

“And then I had to get on a really long flight without it being resolved, which was horrible. We broke up a couple of months later, not because of the message, but that’s just the way things were going.”

The one who texted the birthday boy about his surprise party.

“A friend of ours had asked me to organise a birthday dinner for our friend Luke. It was going to be a surprise for him that all his friends would be there. He wasn’t keen on even acknowledging his birthday. Anyway, I sent my friend a message saying Luke was being a little b**** about his birthday, and we wouldn’t come and the surprise is ruined. But I sent it to the birthday boy. He wasn’t happy… face palm.”

The one who sent her mum a photo… clearly meant for her partner.

“I once sent a very private message including saucy photos to who I thought was my partner… except they went to my mum!  Luckily she was sleeping off a night shift so I drove to her house (1.5 hours away!) and deleted them. Then I had to pretend I had popped in for dinner as a surprise. I now refuse to send my wife anything via message.”

If my brain could text me. Post continues after video.

The one who messaged a client to complain about him.

“I work in the building industry and was dealing with a particularly fussy architect (it was his own house he was building). He had asked me to change the glazing quote at least seven times and one day I accidentally hit reply on an email instead of forward. I was attempting to show a colleague how painful he was being, but alas, it went to the architect.

“Thankfully my bosses found the whole situation [funny] and eight years later we still laugh about it! On the plus side, the client became a little bit easier to deal with, so maybe he realised he was being a pain.”

The one who accidentally told to their crush how they felt.

“I was in my early twenties and had been falling very, very hard for a friend of mine. I didn’t know if she was interested in me at all, but I was so very desperate to tell her my feelings that one Valentines Day I sent her a fairly platonic (but kind of flirty) Valentines message. To my surprise, she replied with a kind of flirty message back! In my happy surprised state, I sent a message to my best friend – something along the lines of ‘Holy shit, she wrote back!! Should I tell her how I really feel?!’ But – alas – I accidentally sent this message directly back to my crush.

“She replied a little sheepishly, but interested. It was late at night, but we agreed to meet up at a park near both of our houses to share a cigarette and chat. That night will go down as one of the best in my life – we shared our feelings (it turned out she felt the same way!), had a great pash under the stars, and went on to have some great times together. Without that accidental text I wonder if I ever would have had the guts to tell her how I really felt.”

The one who mistakenly sent a photo to her work messenger chat.

“I have a good friend that accidentally sent a picture of herself in animal print underwear, heavily pregnant, to the whole messenger group from work, instead of to her Mum.”

The one who accidentally asked an employee about the best approach to fire him.

“Over 10 years ago I was a restaurant manager and was discussing with my group GM [General Manager] my planned approach to let go of an employee who was on probation, and actually sent the text to the employee in question rather than the GM. Not a nice way to find out you’ve lost your job! I’ll never forget that moment I sent it and realised! I was in the office at the time so he came around the corner two minutes later with a very confused look on his face!

“Poor guy, but he was okay and landed on his feet. We joked about it years later. I think I’m now more traumatised about it that’s he was.”

The one who accidentally hit 'reply' instead of 'forward'.

"I got an email once from a lady whose name was 'Jennay' and all I could think was Forrest Gump..."Jen-nay". So I forwarded the email to my friend who worked in the same office as me saying something like 'Check out this name – Jennay – just like Forrest Gump hahaha'. Anyhow, I accidentally pressed reply instead of forward. Luckily the lady was good about it, and replied to me something like 'Yeah – I get that all the time.' It could have been so much worse, thank goodness that’s all I said!"

The one who got a bit to affectionate with a real estate agent.

"My husband and I were talking one afternoon while he was texting a client at the same time. He is a real estate agent. He was distracted by me, and sent this lady a text message saying, 'I'll bring the contract around tonight xxxx'. He instantly threw the phone at me and said 'Uhh what do I do?' I said call her straightaway and explain. Embarrassing!"

The one who thought she was texting one friend to complain about another.

"I was angry at [my friend] Jess (wrongfully so) because I had borrowed a dress of hers and lost it! The dress didn't fit her anymore as she had put on weight so I was annoyed that she was demanding I pay for it. While feeling like I needed to vent, I composed a text to my friend Lana about how ridiculous it was that Jess expected me to pay for a dress that didn't fit her anymore and declaring the end of our friendship... of course I accidentally sent it to Jess and not Lana!

"I was 100 per cent in the wrong on all levels but I will say this fight passed very quickly as my friend knew exactly what I thought and felt. We were also room mates at the time so I rushed home, went to her room and apologised for being in the wrong (there wasn't much else left to say). We continued being room mates and friends! I was young and irrational."

Have you ever sent a message to someone that wasn't meant for them? Tell us in the comments below.