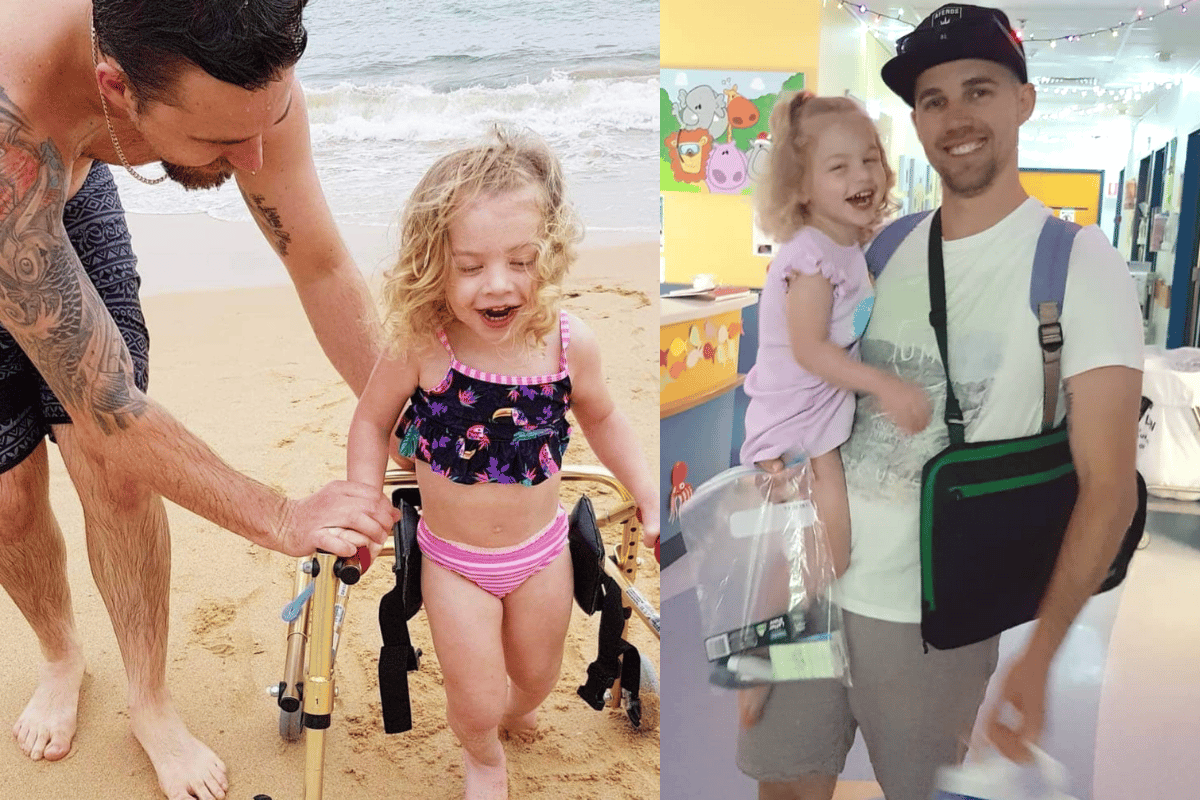 Kirk Thompson is an Aussie dad to three girls aged nine, seven and four. His middle child, Willow, was diagnosed with cerebral palsy and autism early on in her life. And alongside his wife Tara, Kirk initially found it challenging to navigate parenthood with a child with a disability.

But it was the fact that Kirk has often felt left out of the conversation, that has hurt the most.

Back when Willow was born seven years ago, Tara underwent an emergency c-section due to a serious bleed. Their baby Willow was premature and sent to the Neonatal intensive care unit (NICU), and it was during her four-week stay that a brain scan revealed something was different.

And when doctors discovered that Willow had cerebral palsy, Kirk wasn't there to hear the news for himself.

"That day, Willow was being transferred and didn't have to be in the NICU anymore which was awesome news. Both Tara and I had been at the hospital every day for three weeks, and on that day Tara had arrived at the hospital before me. As I walked into the main entrance, Tara ran up to me in tears, completely distraught. I had no idea what was going on," Kirk said to Mamamia.

Watch: The special relationship between dads and daughters. Post continues below.

"I went to go and find the specialist to explain what had happened, and I was pretty angry and annoyed - he had dropped the news on Tara without a lot of empathy and consideration for her, not to mention he should have waited for both parents to be there."

As Kirk explained, the specialist knew Kirk was heavily involved in his daughter's health. And even if Tara had been a single parent, shouldn't she have been offered the opportunity to have someone with her when difficult news was being delivered? And should that difficult news have been delivered in such an inconsiderate way?

"We were shattered. I think the specialist may have been a bit numb, considering he would often be delivering heavy news to lots of parents during his shifts. That's a tough gig. But when I told him afterward the effect that action had, he wasn't remorseful. Perhaps he also figured it was traditional for the mother to be the main caregiver in their child's life, rather than a balance between two parents."

In the wake of Willow's diagnosis, both Tara and Kirk were pretty overwhelmed.

Tara went into organisational mode, dealing with the admin, looking at physical therapies for Willow and becoming her biggest advocate and ambassador. Another positive was that when Willow was only a couple of years old, they were able to get her on the NDIS, which allowed the family to find the best available therapists, equipment and support. 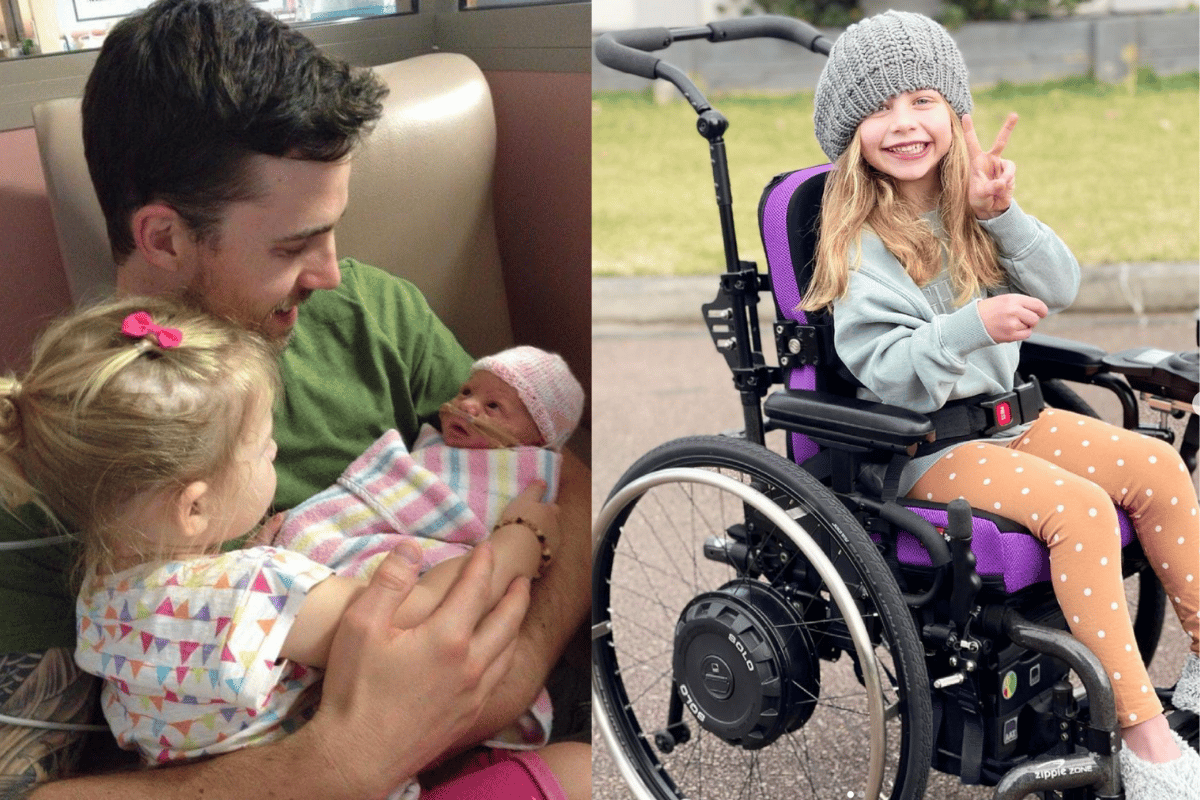 Kirk with Willow as a baby, and Willow today. Image: Supplied. Kirk, on the other hand, was struggling. He was trying to keep up with his hectic job, support his family and deal with high-stress levels.

"I wasn't dealing with everything well. Initially, I was rolling with it all, but once we got home, the impact on family life was evident. And as she got older, it became harder and harder for me to deal with. I sort of just buried it and got on and kept a happy face because I didn't want to stress Tara. But not confiding in someone made it harder," Kirk said.

Internalising his emotions and struggling with stresses at home and with work, Kirk was not coping. And it unfortunately led to a breakdown.

"I knew for a long time that I wasn't helping myself. I didn't speak to people, I didn't seek help and that is probably one of my main regrets in life - that I didn't take action when I knew things were bad. I instead let it fester and put on a brave face, which affected everything around me."

Fortunately, today we have a strong understanding of postpartum depression and anxiety among new and expecting mothers. But when it comes to mental health support and resources for dads, we are still lacking.

"I think we're on track to understanding and acknowledging mental health among dads, but acceptance is another thing. Lots of men aren't great at engaging with their emotions and they don't talk much about it," Kirk said.

For Kirk, he found that connection and conversation were crucial to managing his mental health. Because like many parents of children with a disability would understand, the journey can be stressful and isolating.

"I have a really good mate who has a child a few years older than Willow, and he has experienced similar things - his wife had an emergency c-section and his child was diagnosed with autism. And we talk a lot and he helped me just by reaching out and asking if I was okay," Kirk said to Mamamia. "We can relate and we have a lot in common - he was the only person I really confided in until it got to the point where I had my breakdown. Now it's out there for the world and I'll chat to anyone about it." 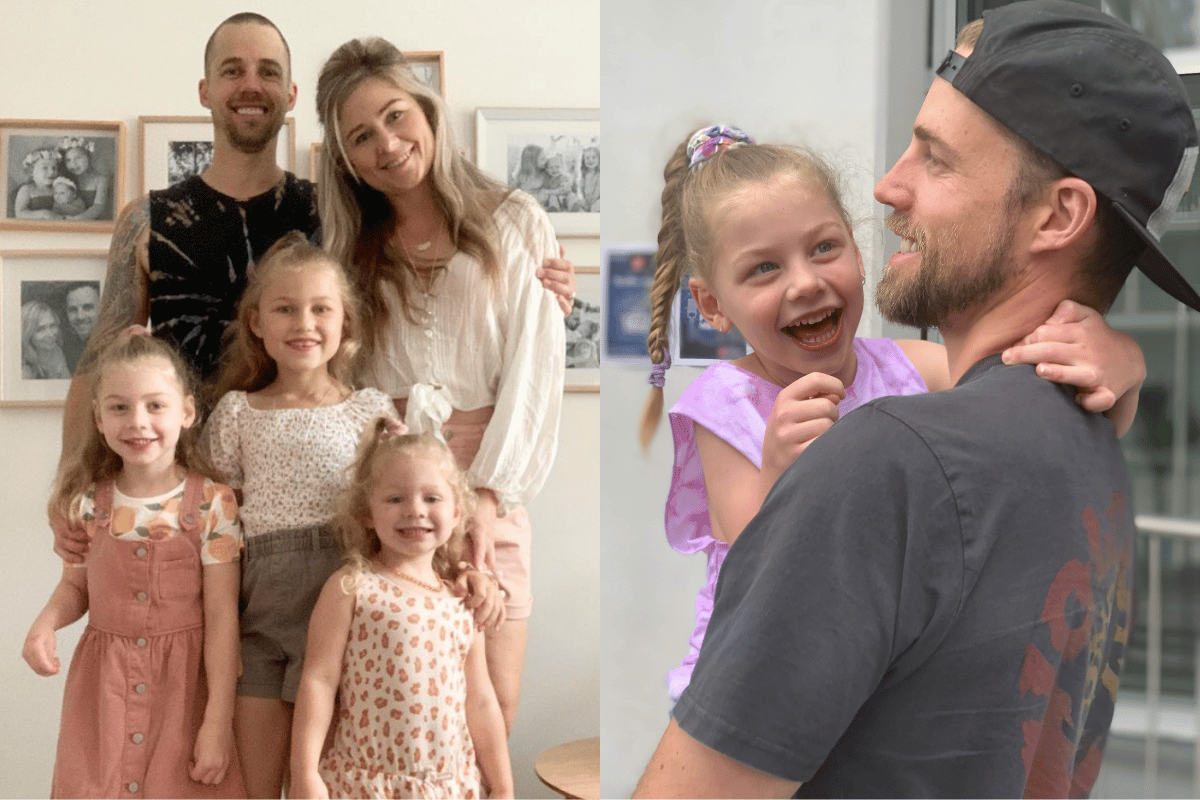 Kirk with his family. Image: Supplied. To help others in a similar position, Tara partnered with Kindship - an app that champions the contribution of parents and their children living with disability. It's an app designed by parents who have lived experience in the disability space, and they are on a mission to connect parents and help them feel less isolated.

And it's an important conversation to be having. In 2021, the Carers Wellbeing Survey found that Australian carers - including parents of kids with a disability - are two and a half times more likely to have low wellbeing than the average Aussie adult.

Kirk himself has started using the Kindship app, saying he hopes it further encourages an open dialogue between dads in particular.

"I signed up to the app before Tara started working on it, and I really appreciated the support available. It's a support network and it's been great to see parents telling one another they're not alone and it's okay to have a rough day."

When it comes to parents with kids on the autism spectrum, Kirk says it can be hard talking to family and friends about autism, when they don't have the lived experience or understanding of it.

"They can mean well and they love you, but they can't get it. And sometimes the attempt to relate or downplay the stress can actually make it worse. For example, when your child has an autistic meltdown, and your mate tries to make you feel better by saying their own child had a tantrum the other day, that doesn't help. There is a very big difference between a regular tantrum and an autistic meltdown, and it's important to acknowledge that."

So what advice would Kirk give to someone who doesn't have that first-hand experience but wants to offer their help and support? Kirk says it comes down to listening - not trying to fix - having empathy and trying to learn more about autism itself.

"Sometimes loved ones can feel uncomfortable about how to approach the topic. As long as you come from a place of love and try to understand and educate yourself, then that's the right way forward," he said.

By sharing his story, Kirk hopes he can make a difference in someone's life. Because if he can help just one person take action in dealing with their mental health, then he will be satisfied.

"The main thing I'm trying to advocate for now is for people to ask their loved ones and colleagues if they are okay. I'm also trying to target dads as much as I can, and not just dads from disabled families, because parenting as a whole can be really tough."

He continued: "Even if they're not coping right now, catching up with someone, going out for coffee and having a conversation could make all the difference. I don't want people to waste five years of their life in a bad state like I did. I want people to know it's okay."

As for what things look like now for the Thompson family, Kirk says he has never been better when it comes to family life.

"I'm in the best position I've ever been. It's ironic but having to have a mental breakdown in order to get myself to a good place, I obviously let it get bad for too long without doing something. But family life is great, my patience levels are better, I want to be home more and Tara and I are connecting really well. If someone had told me two years ago that this is where I would be now, I probably wouldn't have believed them," he said.

Willow is also doing very well. Like Kirk said - "she's brilliant - I think it's good to have a strong-willed daughter. Plus, she's healthy, she's learning and she is just a cheeky, rude and funny kid. That's all you can ask for."

For more information on Kindship, the social networking app for parents of kids with a disability, you can click here.

P
poodletime a month ago