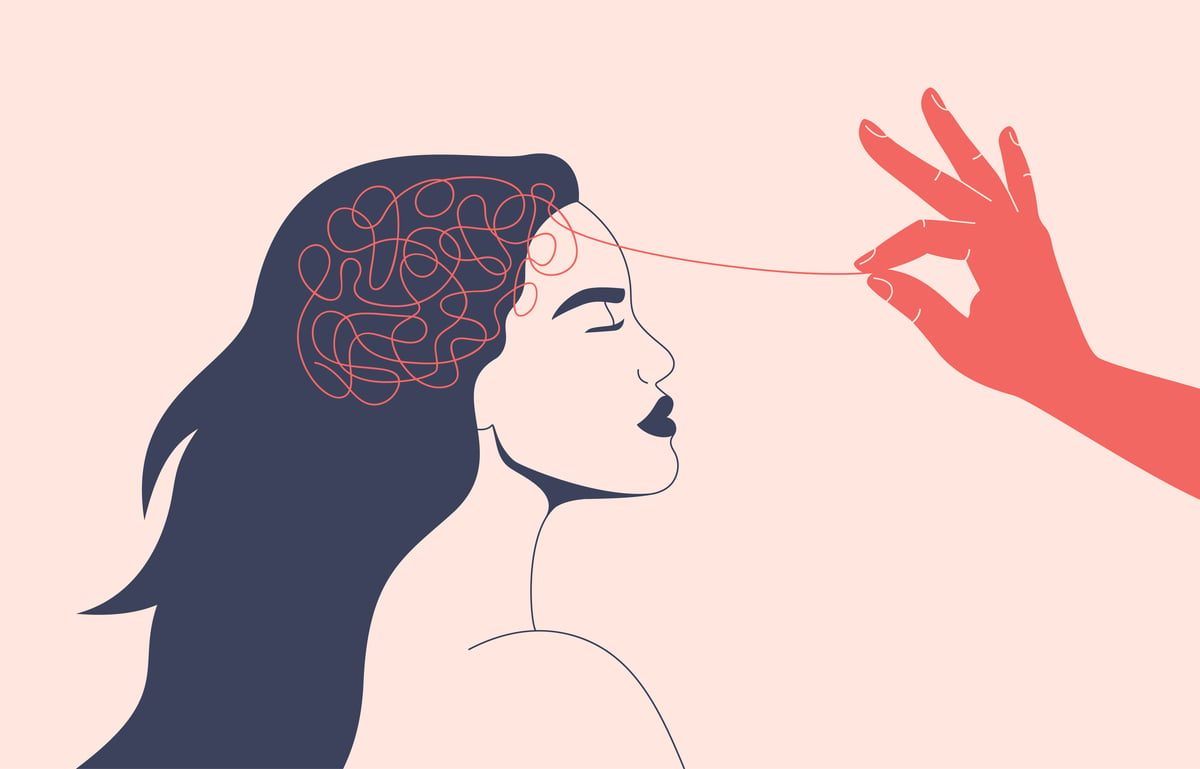 You know the feeling when you walk into a room to get something and completely... forget what you went in there to do? Or you're in the middle of telling a story and suddenly can't remember wtf you're talking about? Or when you just 👏 can't 👏 get 👏  that 👏 effing 👏 word?

These minor brain glitches (a.k.a 'cognitive lapse') can happen to anyone, and they're completely normal - so don't freak out. While they might feel 11/10 concerning (why can't I remember the name of that girl I've met five times 🙃), they don't necessarily mean you're experiencing memory loss or cognitive impairment.

More often than not, forgetfulness can be a result of things like psychological stress, distractions, multitasking, moods and anxiety - things we're all excelling at over the past year.

Watch: Here's exactly what my brain would say if it could text me. Post continues below.

However, it's important to note that symptoms like the worsening of memory, language and attention can also be contributed to things like early dementia and Alzheimer’s disease. And if this is the case, there are some sneaky signs you need to look out for and address in order to prevent further cognitive decline.

To find out more about memory loss and what signs you need to be aware of, we spoke to neurologist Dr Kate Ahmad from Northern Neuroscience and asked her everything we need to know.

What is a cognitive lapse?

Okay, just FYI: Cognitive lapse and cognitive decline are two different things. So, just because you keep forgetting things, doesn't mean you're going to end up with dementia.

"A cognitive lapse is something we can all have from time to time. They’re usually normal as long as they’re not interfering with daily life," said Dr Ahmad.

"They’re things like walking into a room and forgetting why you went in there; or forgetting where you left your phone. Remembering people's names when you’ve only met them once or twice can be hard too."

This all sounds... very familiar. No?

Dr Ahmad said these kinds of lapses mostly occur as a result of decreased attention - so, it's not really anything to do with your memory. Interesting!

"It’s not that you’ve forgotten, it’s that you never really focused enough to make the memory," said Dr Ahmad.

Obviously as we age, our brain ages too, and maintaining certain aspects of attention can become more difficult.

"Stress, depression, poor sleep and being busy can make these things worse."

What is cognitive decline?

When it comes to cognitive decline - things are a little different.

While minor glitches in memory aren't necessarily a sign of developing dementia or cognitive impairment, forgetting where you are or not being able to cope with day-to-day tasks is something more worrisome.

"Cognitive decline is more concerning. It’s getting lost - not in a new place, but in a place you know well. Or becoming disoriented to time or familiar people," said Dr Ahmad.

"You may find normal activities become too hard - the finances, following the plot of a novel or TV series. These are signs you should seek medical help."

What are some common signs of cognitive decline?

Cognitive decline presents itself in all different aspects of life - but it can be confusing to know if your forgetfulness is just "an ageing thing" or something you should actually be worried about.

According to Dr Ahmad, there are a few key things you should look out for - and the earlier you recognise them, the better chance you have at turning things around.

2. Change in mood or personality.

Dr Ahmad said other common symptoms are changes in mood or personality.

"Some people become more apathetic or dependant; and some can become more paranoid or difficult."

"It’s also common to lose the ability to do everyday tasks (like working the oven), or having trouble with language (often needing to describe an object rather than simply name it)."

Subtle personality changes often fly under the radar and might commonly be passed off as chronic stress. However, it could be an early sign of developing cognitive decline.

"Some people start to behave in unusual or odd ways which are out of character - wearing too many or not enough clothes, hiding things, change in food preferences, or wandering."

While you may not be able to change your genes, the sooner you recognise and address symptoms of cognitive decline, the more likely you are to see an improvement.

And according to Dr Ahmad, the best way to slow or prevent cognitive decline all comes down to a healthy lifestyle.

"Adequate, good quality sleep; a healthy diet with plenty of plant-based food; daily exercise and avoidance of anything beyond a small amount of alcohol," she said.

"It’s also important to keep the brain engaged and active - having purpose is important for mental and cognitive health. Being social and having a life beyond your home can also assist."

You can keep your brain active and always improving by continuously learning and remaining curious. Read books! Take classes! Learn new skills! Use those senses! Especially when it comes hearing.

"One often neglected area of cognitive protection is maintenance of hearing," said Dr Ahmad. "Hearing allows for more social interactions and stimulates the auditory part of the brain."

What should you do if you're experiencing symptoms of cognitive decline?

So, how do you know when it's time to see a doctor? "If you’re having cognitive symptoms and they’re worrying you - it’s always worthwhile seeing a doctor," said Dr Ahmad.

"In younger people, the symptoms are unlikely to be caused by dementia, but they may be caused by anxiety, drugs/medications, poor sleep/sleep apnoea or other medical issues."

Seeing a medical professional and even getting some basic tests can allow your doctor to monitor your cognitive performance and possibly prevent issues in the future. So, it's definitely something worth checking out.

"In older people, early recognition of evolving cognitive impairment can help keep a person safe, supported and independent for as long as possible."

Dr Ahmad also said that it's important to take care of any other health conditions to see if that has a domino effect on any cognitive issues.

"Whilst a diagnosis of a degenerative dementia like Alzheimer’s won’t have a cure - sometimes other medical problems like hypothyroidism, low B12 or depression can look just like a dementia, and these are treatable conditions."

"Allow yourself the occasional cognitive lapse, but if you’re worried, if your family is worried, or if your symptoms are interfering with work or family - then have a chat with your GP."

Have you ever been tested for memory loss? What was your experience? Share your thoughts with us in the comment section below.