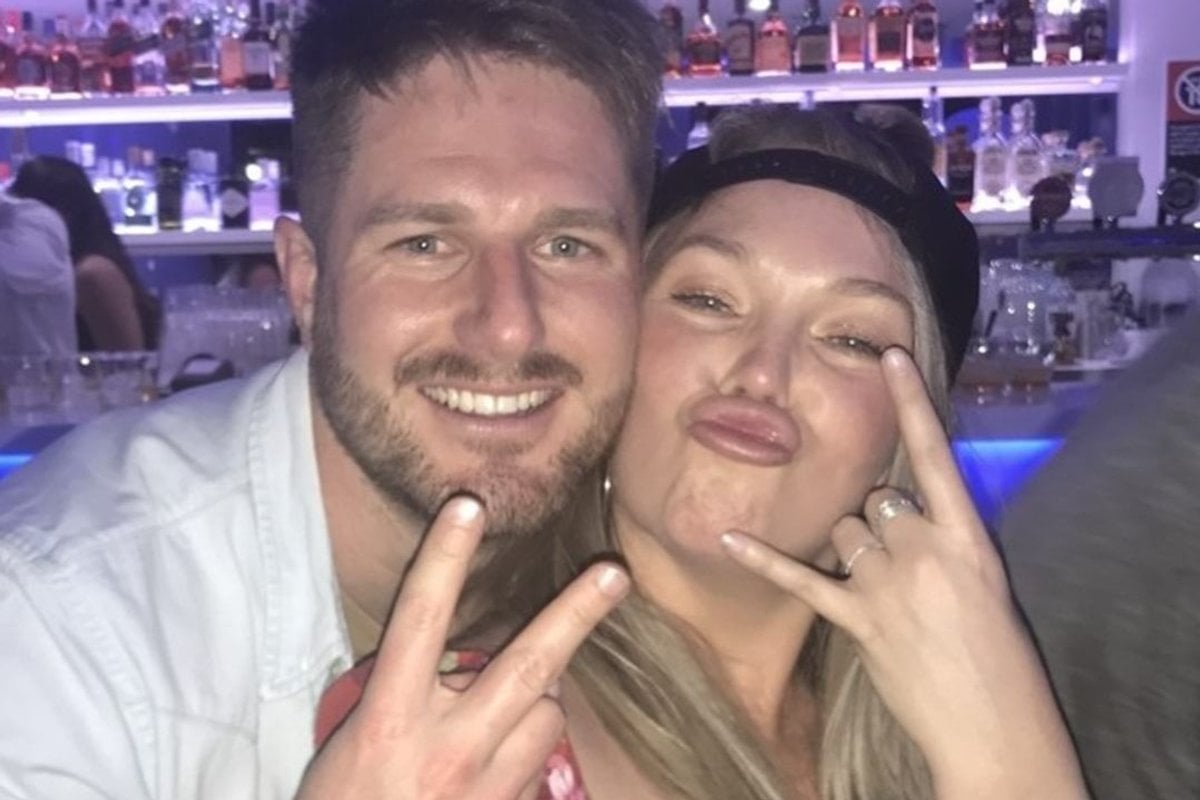 1. Bryce and Melissa are ‘in talks’ about their own reality TV show.

Married at First Sight's Bryce and Melissa have been doing the media rounds yet again, and in terrifying news, they've got plans for their own reality TV show, kids and IRL proposals.

"We're actually in talks to have our own reality show," Bryce told Woman's Day this week.

"That's what we're looking at doing."

Whether it is a Cam-and-Jules-style broadcast wedding, or something more substantial hasn't been revealed just yet, but Melissa confirmed that she'd love to "showcase why (they) love each other so much".

"It'd be amazing to showcase why we love each other so much and who we are as people outside of the show because we're just two normal people, and maybe we weren't supposed to be together but we've overcome all the odds," Melissa said.

"I'm the happiest I've ever been. I'm in a loving, safe and committed relationship with Bryce, and I'm in love! And besides, I'm a grown woman – I would have walked away long ago if I didn't feel safe,."

Listen to Mamamia's daily entertainment podcast, The Spill, where hosts Laura Brodnik and Kee Reece discuss the MAFS moment so extreme it involved the police. Post continues below.

When asked about kids, Bryce responded simply: "We'd be lying if we said we weren't trying."

"I never saw myself having kids, but it's definitely a step in the right direction for us and it's something I'm looking forward to," Melissa added.

2. Lizzo slid into Chris Evans’ DMs and we have all the screenshots.

Lizzo jumped on TikTok this week to share her drunk-DMs with Chris Evans, and it's just about the most relatable thing we've ever seen.

The singer shared a video lipsyncing to a sound created by TikTok user 'therealtati', that says: "The reason I'm upset about this one is because I know I'm not gonna be able to marry him, and honestly, it hurts me to the core, because damn papa, he a rare breed, no comparing. Like, Chris..."

And in the background is a DM she's sent to Chris Evans with a few basketball emojis, the post captioned "Don't drink and DM, kids."

Don’t drink and DM, kids.... for legal porpoises this is a joke

But, unlike the rest of us, Lizzo did indeed receive a response, where Chris wrote:

"No shame in a drunk DM, god knows I've done worse on this app lol."

3. Jake has slept with another MAFS bride, and precisely no one could have seen this coming.

In some very surprising news for your Monday, it turns out MAFS groom Jake Edwards slept with another MAFS bride from an entirely different season.

Earlier today, season six bride Melissa Lucarelli confirmed that she hooked up with Jake back in February, which officially ended her erm... 10 year 'sex drought'.

"Not having sex for a decade, then finally breaking that drought with not mine but still a MAFS groom - not sure what else I can say to top that!," she told the Daily Mail.

According to The Wash, Jake and Melissa met at a party in Sydney shortly after last night's reunion episode was filmed and later went back to a hotel room together.

When asked if it was 'everything she’d imagined it’d be', Melissa told said, "Ummm no, not really. I guess I thought I would play it cool at least. And I was anything but cool guys, as I’m sure you can all imagine".

Long-time MAFS fans will know that Melissa has been quite open about her celibacy in the past.

"Obviously I didn’t think it was going to be eight years! I’ve met some guys and been on some dates, and obviously there’s been kissing and some more things like that. But obviously not the sex, and no relationships."

4. Why Chris failed to show up to the MAFS reunion last night.

Among the chaos of last night's MAFS reunion, you may have noticed one groom was absent from the couch.

According to the Daily Mail, intruder groom Chris Jensen decided not to attend the reunion because he "didn't want to put himself in a position" where he would be involved in a confrontation with his wife, Jaimie Gardner.

"He doesn't want to see her again. He's not the sort of person that likes to purposely walk into confrontation. It's the complete opposite of what he stands for," an unnamed source supposedly told the publication.

"Jaimie tried to convince him to stay and begged him to stop being too nice to make her attitude and what she was saying about him look okay."

The source went on to say that Chris went on the show "for the right reasons" and was apparently "devastated" when he was paired up with Jamie.

"He didn't care [for fame] and wasn't expecting his past to be resurfaced."

The news comes after it was reported that Chris was arrested on drugs charges before appearing on MAFS.

5. Everything that has happened since the MAFS cameras stopped rolling. 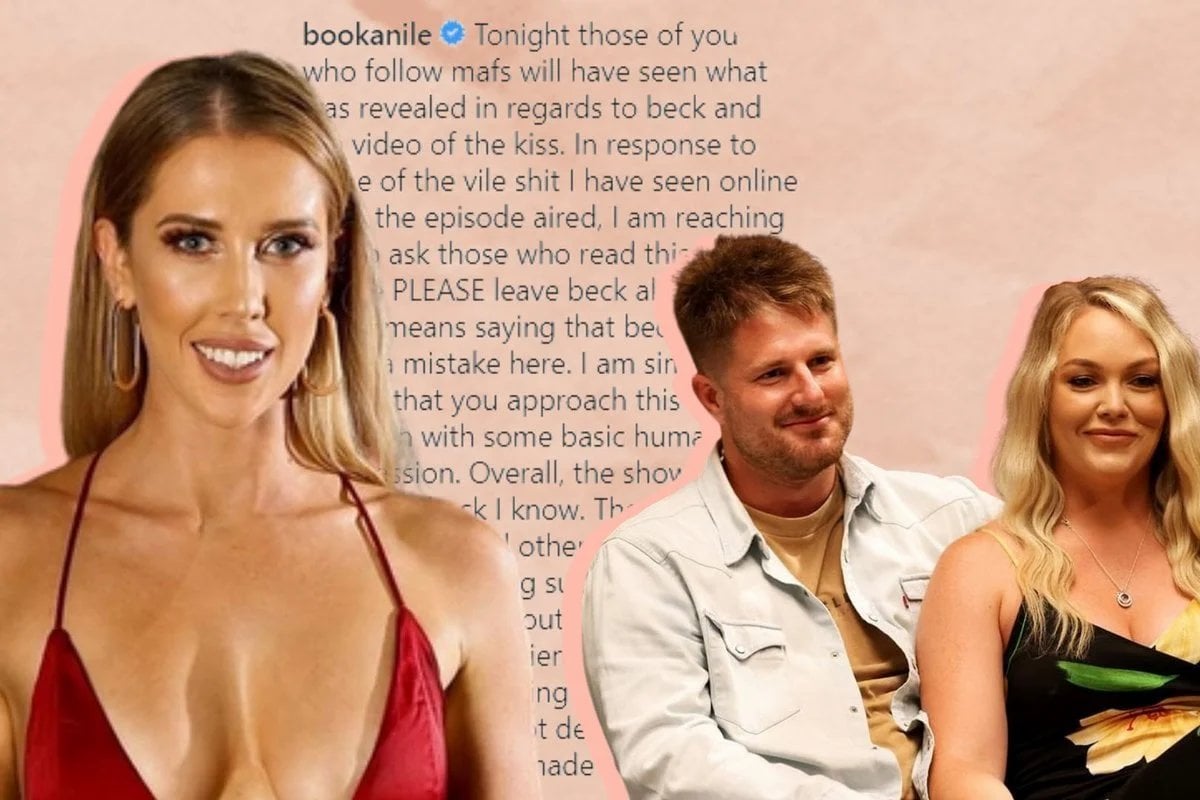 So, what's everyone up to tonight?

The trash fire that was MAFS 2021 is finally over, and we suddenly have time to live our lives again. I kind of... don't know what to do with myself.

But before you make plans, there are a few more things we need to discuss. Namely, all the totally wild drama to come out since Sunday night's finale episode.

In true Married At First Sight fashion, the cast have gone rogue on Instagram, salacious rumours are swirling and gossip sites are dropping some major bombs.

We know you want to hear it, so keep on reading. You can always make plans for tomorrow night.

Following the MAFS final episode, Booka shared a lengthy post on Instagram asking people to leave Beck alone, after she was flooded with negative messages about the video of the kiss.

"I am by no means saying that Beck didn't make a mistake here. I am simply asking that you approach this situation with some basic human compassion," Booka wrote.

She said the show did not show "the Beck I know" and that while she did not condone her actions, Beck was a human being like the rest of us.

"Complex, flawed, jaded and sentient like all of us. Beck has had to endure a level of cyber bullying and cruelty from the public that I cannot even comprehend," she wrote.

"Too many MAFS participants over the years have had to endure the same vile and often violent online abuse that I’m seeing Beck receive. The lasting impact this cruelty can have on them is utterly f***ed. If you're trying to make a point about morality and core values by posting cruel shit, take a moment to reflect on where your own morals and core values lie."

Booka said no matter how much you think you know someone from seeing them on TV, you don't actually know them.

"At the end of the day you don't know them... Especially not well enough to justify abusing them, degrading them, and actively subjecting them to horrific online commentary and abuse. I know Beck. I know her better than anyone who's based their opinion of her purely off this show. She deserves better than this."