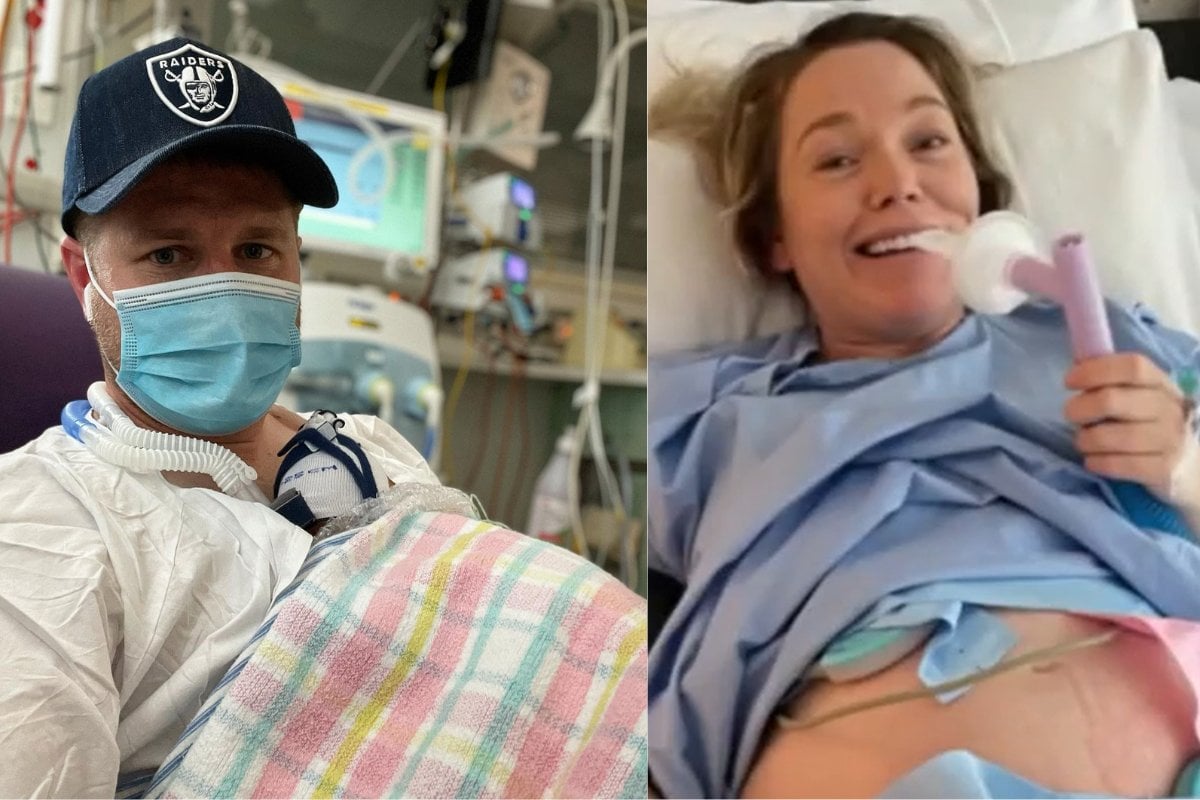 Bryce announced the news to his Instagram on the early morning of October 16, in a video that showed the pair at the hospital.

"So we didn't have our typical Saturday morning, did we babe?" he asked Melissa, showing her in a hospital bed.

"No, today we were planning to start establishing the nursery but here we are.

"It's a big shock, very early, but I'm being very well looked after," she said.

The couple, who were already fake-married for the TV show, first announced that they were expecting in a cover shoot with New Idea earlier this year.

"It's all happened very fast," Bryce told the magazine.

"People saw on the show how supportive and loyal Mel was. I'm pleased to say that's transitioned to the real world."

"It's been a whirlwind, but we're so incredibly happy," Melissa added.

After two weeks in hospital, the TV reality star pair have announced they named their twin boys Levi and Tate.

"We wanted unique names that had a modern feel to them," Bryce told New Idea.

"We also wanted names that promote positivity for them and our new family. Levi means ‘harmony among others’ and Tate means ‘cheerful’ so it suits them perfectly."

Melissa said they had thought about a bunch of names for their two children, but "always came back" to Levi and Tate.

Melissa told the magazine she was emotional and said "holy s**t" seven times after the nurse told her she was pregnant with twins during her first ultrasound.

The newborns are expected to stay in the Neonatal Intensive Care Unit for a few more weeks, Bryce explained.

"They're responding well to treatment and are squeezing our fingers which is the best feeling in the world."

Melissa and Bryce created a lot of controversy during MAFS 2021 season, but told New Idea they were pleased to put that chapter behind them.

"We're not doing this for anybody else, it's about us – we're cementing our love," Bryce said.

"Melissa deserves to be happy and I'm apparently very good at that, so I'm looking forward to making it all official.

"Our kids will have a friend for life, it's a very special thing. We hope they grow up close. This is all such a blessing to be able to bring two children into the world together."

They said they were planning a "low-key" wedding after their babies birth and no, the MAFS experts would definitely not score an invite.

Bryce proposed during a helicopter tour across Melbourne, after the couple picked out a black diamond ring together.

Bryce and Melissa are one of the few couples to remain together after MAFS filming.

Season six's Cam and Jules also officially married after their on-screen wedding and in October 2020 announced the birth of their son, Oliver.

Season two couple Erin and Bryce remain together, as do season six's Martha and Michael.

Reply
Upvote
Good luck with that.
Any parent who has had kids in Nicu knows how stressful, difficult  and heartbreaking it can be.
As for their boys being home after a few weeks?  Um no.
Also, while I’m being a party poopatrix,
has everyone forgotten what an abusive arsehole  Bryce was? It was not ok and no amount of editing bias could isolate Melissa the way he did.
“ Everyone could see how loyal and supportive Melissa was” … yeah mate to your needs, on your time,for your agenda .
Yes ,it is a reality show, yes , editing creates characters and by all accounts MAFS producers, psychologists paid no heed to the vulnerability of some of the cast members. Cos , you know, it makes for good Tele .
I do genuinely hope that support is forthcoming and the babies  do well .
News
General
Opinion
True Crime
Politics
Sport
Explainer
Entertainment
Celebrity
Reality TV
Movies
TV
Books
Rogue
Royal
Lifestyle
Beauty
Fashion
Weddings
Home
Wellness
Health
Fitness
Travel
Food
Parents
Before The Bump
Pregnancy
Baby
Kids
Teens
School
Parent Opinion
Work & Money
Money
Finance
Career
Lady Startup
Relationships
Sex
Dating
Separation
Friendship
Family
Real Life
Couples