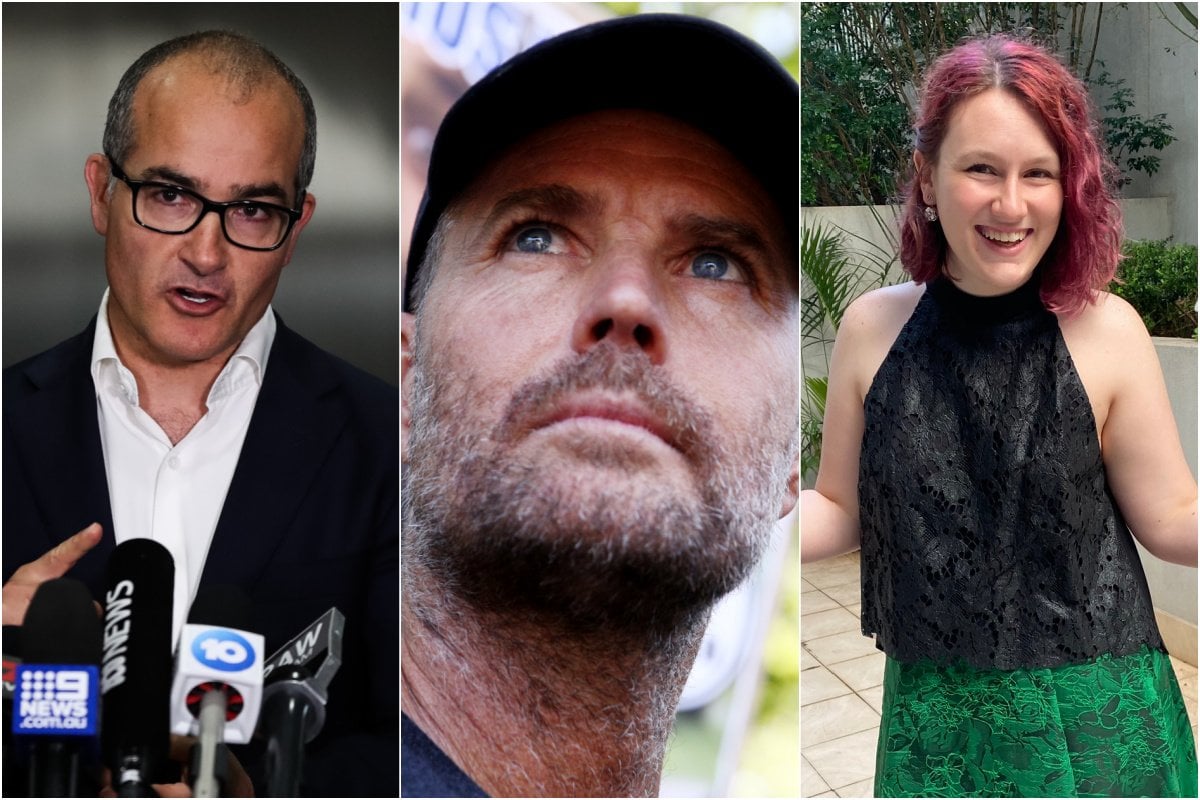 Melbourne has ramped up coronavirus restrictions and more could be on the way, as health authorities try to contain an emerging outbreak in the city's north.

The cluster has grown to nine after four new cases - all household family contacts of a man in his 60s - were detected on Tuesday afternoon.

Victoria's Chief Health Officer Brett Sutton warned there may be further cases uncovered in the next 24 hours, with 84 of 168 primary close contacts testing negative so far.

Thousands of Melburnians are being advised to self-isolate immediately as the city's coronavirus cluster grows. https://t.co/7mxp1NlawF

"We have to chase down every single close contact ... but it's certainly not out of control," he told ABC Radio Melbourne.

In response to the unfolding outbreak, home gatherings were limited to five visitors per day and public gatherings restricted to 30 people from 6pm on Tuesday.

Masks are now also mandatory indoors for people aged 12 and over, though they can be taken off for eating, drinking and exercise.

Schools and workplaces will remain open, as will shops, cafes, restaurants and pubs, however existing density limits apply.

Exposure sites will be published when confirmed at https://t.co/SQ5trZYEci. To see where to get tested, visit https://t.co/WZI0U7BRyW.
[6/6]

Queensland, Western Australia and South Australia have all significantly tightened their borders to Victoria while stopping short of completely slamming them shut for most travellers.

Federal police revealed on Tuesday they had received 40 reports about 19 allegations of misconduct linked to federal politicians and staff since former Liberal staffer Brittany Higgins came forward three months ago.

The complaints were made through an 1800 police hotline established after the alleged rape of Higgins.

Horrific revelation from estimates this morning.

It's prompted the prime minister to move faster - he now says he has no intention of waiting for Sex Discrimination Commissioner Kate Jenkins' report due later this year, which is expected to tackle broader concerns about the toxic workplace and culture.

"In particular her recommendation to establish an independent complaints mechanism, which is urgently needed in this place," he said.

He plans to release the Foster report next week after private discussions with Labor, the Greens and others.

Four years after Saxon Mullins walked out of a courtroom feeling "lost, alone and powerless", NSW is introducing a law that would have jailed the man she says raped her in a Kings Cross alleyway.

Ms Mullins became the face of a national push to strengthen sexual consent laws, after telling the ABC how she was sexually assaulted as an 18-year-old virgin behind a nightclub in 2013 by a man she'd met minutes earlier.

Two trials and two appeals later, a judge found the man involved had no reasonable basis for believing she had not consented while acknowledging that Ms Mullins - in her own mind - had not consented.

People accused of sexual assault will need to prove they took steps to obtain consent, as part of a major overhaul of sexual consent laws in NSW. https://t.co/1GjVsbHOD7

Within 24 hours of Ms Mullins' interview airing in 2018, Attorney-General Mark Speakman referred the laws to the NSW Law Reform Commission for a review.

Now, NSW will lead the country with a radical overhaul of sexual consent laws that will make it easier to successfully prosecute offenders. The reforms announced by Mr Speakman on Tuesday mean accused rapists would only be able to prove sex was consensual if they took active steps to obtain consent.

Under the new legislation, which is hoped to be in place by the end of the year, the accused will have to have done something or said something reasonable in the circumstances to ascertain consent.

Celebrity chef turned conspiracy theorist Pete Evans has again been fined for falsely promoting an array of devices and drugs as miracle cures for ailments including the coronavirus.

The former Seven Network star was on Tuesday hit with another $79,920 in fines for breaching advertising requirements.

It comes after his company was fined more than $25,000 by the Therapeutic Goods Administration in April last year after he promoted a device called a 'BioCharger' on a Facebook live stream, claiming it could be used to cure the coronavirus.

Evans was at the time warned about his promotion of other products, but was on Tuesday fined again for spruiking the BioCharger and several other treatments that are not included on the Australian Register of Therapeutic Goods.

In some cases, Evans implied the products he was advertising were endorsed by health professionals. He has been ordered to remove the posts, and to stop advertising unapproved products and therapies.

Queenslanders told to cut energy use after biggest power outage in decades.

Queenslanders have been told to cut their energy use to make sure the network can cope after a fire took out a major plant and cut power to half a million customers.

It's being described as the biggest power failure in decades, and a day later more power outages have not been ruled out.

More than half a million Queenslanders have been impacted by the biggest power failure in decades, with further blackouts not yet ruled out. #9Today @R_DAlessandro9 pic.twitter.com/gjCnN6VNEy

Consumers were urged to "minimise stress on the system" until 9pm to ensure there's no shortfall - something that could cause brownouts or blackouts.

So far the system is coping with the help of imported electricity after Tuesday afternoon's fire, which is now surrounded by a 550-metre exclusion zone.

Scores of healthcare workers have rallied outside Perth Children's Hospital as the West Australian government finalised plans for an inquiry into the death of a seven-year-old patient.

They say the death of Aishwarya Aswath has highlighted systemic problems within the state's public hospitals and are furious that two junior nurses and a doctor who treated the girl have been referred to the medical watchdog.

"We want to support Aishwarya's family in their search for answers, transparency and responsibility at all levels of the healthcare system," AMA WA president Andrew Miller said.

Health Minister Roger Cook addressed the protesters and later published the terms of reference for an independent inquiry into Aishwarya's death.

Seven-year-old Aishwarya died of an infection on Easter Saturday after being forced to wait for treatment in the PCH emergency department. A root cause analysis report by WA's Child and Adolescent Health Service found staff missed a "cascade" of opportunities to escalate her care.

Airlines are shunning Belarus's air space and Belarusian planes could soon be banned from Europe, potentially isolating the country apart from its border with Russia after it forced down a jetliner and arrested a dissident journalist.

On Sunday he was pulled off the passenger plane that was forced to land in the Belarusian capital Minsk.

"Even behind bars, he remains a hero."

The parents of arrested Belarusian journalist Roman Protasevich say they don't know whether or not their son is alive, but "he's already done a lot" to expose "torture and oppression" in the country and they believe he will do more. pic.twitter.com/qkIz4Drfig

Exiled opposition leader Sviatlana Tsikhanouskaya said the video left no doubt that Protasevich had been tortured.

"He said that he was treated lawfully, but he's clearly beaten and under pressure. There is no doubt that he was tortured. He was taken hostage," she told a news conference in the Lithuanian capital Vilnius on Tuesday.

Protasevich and a 23-year-old student travelling with him were arrested after their Ryanair flight was escorted by a Belarusian warplane while flying from Greece to Lithuania.

Western powers have widely condemned the incident, which NATO Secretary-General Jens Stoltenberg described on Tuesday as a "state hijacking".

The UN agency ICAO has said the incident may have violated the foundational treaty governing international civil aviation, the 1944 Chicago Convention.

George Floyd has been honoured with a moment of silence in the US city where he died at the hands of police, a death captured on bystander video that galvanised the racial justice movement and continues to ripple a year later.

A Marine holds the door as Gianna Floyd, the daughter of George Floyd, walks into the White House. pic.twitter.com/tbsavLTzcx

A family-friendly street festival was also planned at the Minneapolis intersection where Floyd died.

That intersection was disrupted by gunfire just hours before the event.

Police said a man, who they believe was injured in the shooting, later went to a nearby hospital with a gunshot wound.

Police spokesman John Elder said he was in critical condition but was expected to survive.

- The United States has called for international experts to be allowed to evaluate the source of the coronavirus and the "early days of the outbreak" in a second phase of an investigation into the origins of COVID-19.

- This year's only lunar eclipse will begin on Wednesday evening at 6:47pm (AEST) in the form of a super blood moon, with the eclipse to last 13 minutes from 9:11pm-9:25pm.