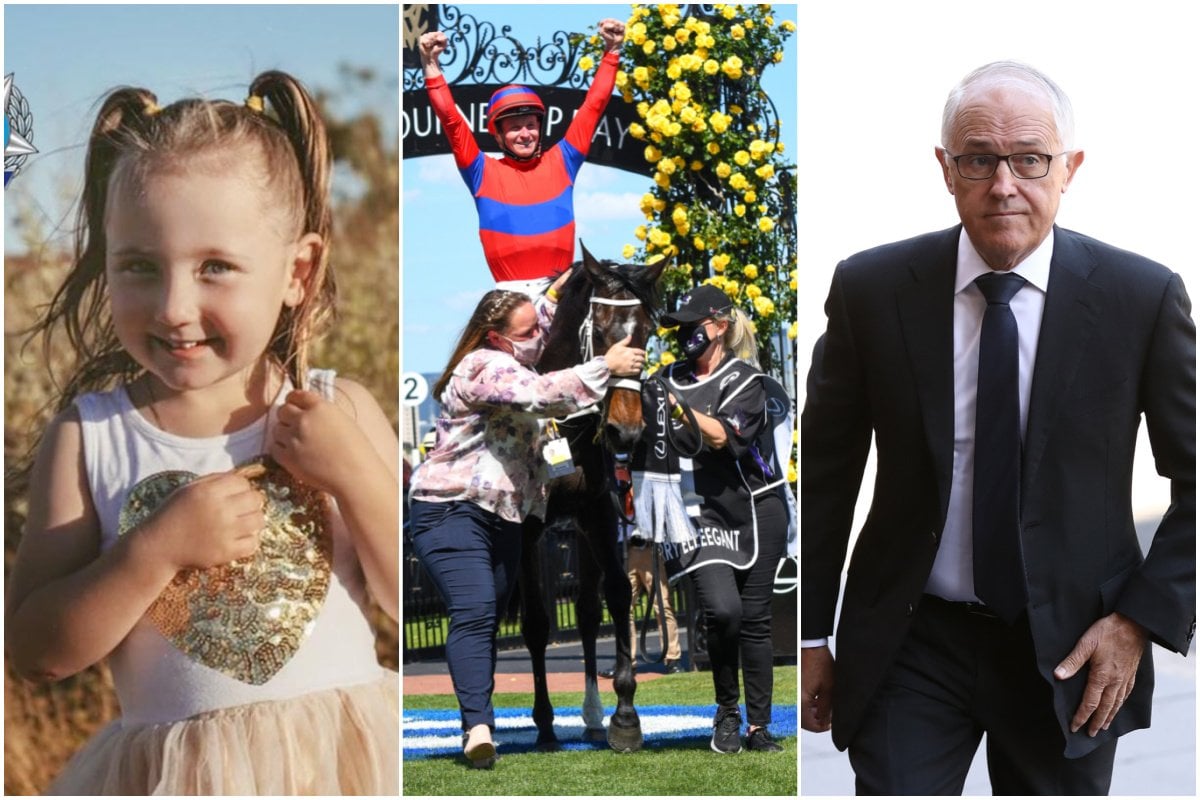 WA police officers "broke their way into a locked house" at 1am this morning and found the four-year-old in one of the rooms.

#BREAKING Cleo Smith has been found alive and wellhttps://t.co/uDis9f29xj

One of the officers picked her up into his arms and asked her "what’s your name?"

Cleo was reunited with her parents a short time later.

A man from Carnarvon is in custody and is currently being questioned by detectives.

"This is the outcome we all hoped and prayed for," said Deputy Commissioner Col Blanch.

"It’s the outcome we’ve achieved because of some incredible police work.

"I want to thank Cleo’s parents, the Western Australian community and the many volunteers.

"And of course, I want to thank my colleagues in the Western Australia Police Force."

Melbourne Cup favourite Incentivise suffered a leg injury during his attempt to hold off Verry Elleegant in the $8 million race.

Trainer Peter Moody told Racing Victoria stewards Incentivise had swelling in his near foreleg after cooling down following his second placing to Verry Elleegant.

He said the Caulfield Cup winner would be assessed by a stable veterinarian in the next few days.

Geelong Cup winner Tralee Rose was also injured when she was galloped on by another runner in the early stages.

She finished ninth but was taken to a veterinary clinic to have treatment for a leg wound.

The 2021 race is only the third since 2013 to pass without a fatality. Over the past nine years, seven horses have died as a result of injuries sustained while competing in the event. Seven. https://t.co/WViDu1NpBz

Tralee Rose's jockey Dean Holland was one of two riders suspended out of the Cup.

He pleaded guilty to careless riding for causing interference to New Zealand stayer The Chosen One.

Verry Elleegant became the first mare to win the Melbourne Cup alongside jockey James McDonald, since Makybe Diva completed a hat-trick of wins in 2005.

With 93 per cent of the state receiving one dose, and 81.4 per cent double dosed, it's hoped this is the start of a downward trend.

Delaying the lifting of restrictions for unvaccinated people may be the push some need to get jabbed, a leading NSW doctor says following changes to the state's reopening roadmap.

Australian Medical Association (AMA) NSW president Danielle McMullen said the state was in a "critical period" with the virus still circulating in the community while restrictions lift and vaccinated people are allowed to socialise and travel again.

Dr McMullen said the AMA "recognise that for some... not getting vaccinated isn't a choice".

"This is why it is especially important to have as high a vaccination rate in the community as possible," she said.

On Tuesday, Mr Perrottet announced further restrictions will lift for the fully vaccinated next week, while the unvaccinated will have to wait even longer.

A quick run down of what today's changes mean. https://t.co/ruEXeTY9M6 pic.twitter.com/btdQTmRcmP

He said maintaining restrictions for unvaccinated people until December 15, or until the state hits 95 per cent vaccination, will "incentivise" more people to get the jab.

"That is the key to opening up in a way that keeps people in work, drives companies across the board and gets and keeps businesses alive," Mr Perrottet said.

The changes come as the state's vaccination rate continues to climb toward 95 per cent full vaccination.

From Monday, fully vaccinated people can have as many visitors to their house as they like, and 1000 people can gather outdoors before a COVID-safe plan is needed.

Density and capacity limits will lift for hospitality venues who will require two square metres for every person inside, and nightclub patrons can dance again.

Gym and dance classes will remain capped at 20, but indoor pools will be allowed to reopen.

The changes were originally planned for December 1 and would have included unvaccinated people as well.

The prime minister maintained Mr Macron knew there were problems with the Naval Group project before Australia announced it was torpedoing it.

But Mr Turnbull, under whom the 2016 contract for the Attack Class vessels was signed, thinks Mr Morrison owes the French an apology.

"Scott has always had a reputation for telling lies".

Malcolm Turnbull has called Prime Minister Scott Morrison a liar, saying he should apologise over the submarine deal. #9Today pic.twitter.com/B5CPWVn9ak

"When you're dealing with people, honestly - and Scott Morrison did not do that - you don't drop hints. You actually tell the truth.

"It was a partnership between two nations, it was a cornerstone of France's Indo-Pacific strategy and to be double-dealing them the way Morrison did was shameful."

Mr Macron told Australian journalists at the G20 summit on Sunday, "I don't think, I know" the prime minister lied to him about the submarines.

Mr Morrison retaliated on Monday, detailing problems with the program during a news conference at the COP26 climate summit in Glasgow.

Opposition Leader Anthony Albanese took aim at Mr Morrison for conflating criticism of his handling of the deal's cancellation with criticism of Australia.

"(Scott Morrison) is not the state of Australia. (He is) using our nation as a human shield," he said.

Australia will play a global role in helping other countries reduce their emissions and better prepare for disasters.

That's the message Prime Minister Scott Morrison and Energy Minister Angus Taylor aimed to leave with leaders as they prepared to exit the COP26 climate talks in Glasgow.

However, Labor says the government went to the conference with a pre-election political deal cobbled together with the Nationals and left having had nothing new or ambitious to say to the world.

Mr Taylor used the summit to unveil the second of the government's low emissions technology statements, following the inaugural statement in September 2020.

The technology plan and emissions reduction fund are the two pillars behind Australia's recent pledge to get to net-zero emissions by 2050.

Overnight in Australia, Prime Minister Scott Morrison addressed world leaders at the #COP26 summit with a speech that was light on commitments and credibility, but heavy on spin.

Mr Taylor noted Australia was willing and able to share emissions-reducing technology to enable the world to reach the 2050 goal.

Mr Morrison on Tuesday joined in an announcement alongside the UK and India of a new financing arrangement to help small island developing states prepare for disasters.

Australia also joined with 104 other countries in signing a leaders' declaration on forests and land use.

Labor leader Anthony Albanese said he remained hopeful the conference, which ends on November 12, emerged with a "positive outcome".

However, he said Australia was trailing the rest of the world when it comes to clean energy because the prime minister had overseen a "decade of denial" in terms of climate action.

A man who terrorised Darwin during a drug-fuelled shooting spree has admitted gunning down four people, cutting short a seven-week trial.

Benjamin Glenn Hoffmann had pleaded not guilty to committing four murders in less than an hour at four locations on June 4, 2019. He'd also denied 10 other serious charges, including threatening to kill and recklessly endangering life.

But on Tuesday, the 47-year-old entered guilty pleas to eight of those offences, including murdering, Hassan Baydoun, 33, Michael Sisois, 57, and Rob Courtney, 52.

A love-sick man on trial for terrorising Darwin during an hour-long, drug-fuelled shooting spree has changed his pleas and admitted killing four people.

Benjamin Glenn Hoffmann had pleaded not guilty in the Northern Territory Supreme Court.https://t.co/44CGuEMYpF

He also pleaded guilty to the manslaughter of Nigel Hellings, 75, after the prosecution agreed to accept the lesser charge.

The Crown accepted the guilty pleas "in full satisfaction" of the 14-count indictment.

Queensland will forge ahead with its COVID-19 quarantine camp near Toowoomba, despite reports the federal government wants to scale down a facility being built in Brisbane.

However the federal government is considering downsizing those facilities as states progressively open their international borders, according to News Corp.

Queensland Agriculture Minister Mark Furner said the state-funded facility at Wellcamp would be needed for foreign and unvaccinated travellers for the foreseeable future and there were no plans to scale down.

The Queensland government will forge ahead with its COVID-19 quarantine camp near Toowoomba, despite reports the federal government wants to scale down a facility being built in Brisbane.https://t.co/98siw4mkNW

"Our plan is still on track for a 1000-bed facility by around March-April next year," he told reporters on Tuesday.

Queensland recorded no new COVID-19 cases on Tuesday, as the state prepares to begin home quarantine for double-dosed domestic arrivals at the 70 per cent vaccination mark.

Quarantine will be scrapped for all domestic arrivals when 80 per cent of eligible Queenslanders are fully vaccinated, or December 17 at the latest.

- Afghan officials say an attack on a military hospital in the capital of Kabul has left at least 25 people dead.

- Facebook says it's shutting down its facial recognition system which automatically identifies users in photos and videos, citing growing concerns about the use of such technology.

- Coronavirus linked deaths have hit new highs in Romania and Russia while a surge in hospitalisations in Austria is expected to tighten pandemic restrictions.

Only 37 per cent of Romanian adults are vaccinated, and less than 35 per cent are in Russia.

Reply
Upvote
I think 22 million Aussies were all fist pumping the air this morning in the news of the great outcome... WA Police, you are all hero's!
May this dear family be given space and privacy to   take care their brave, brave little girl.💐💐💐
F
fzmclaren 7 months ago