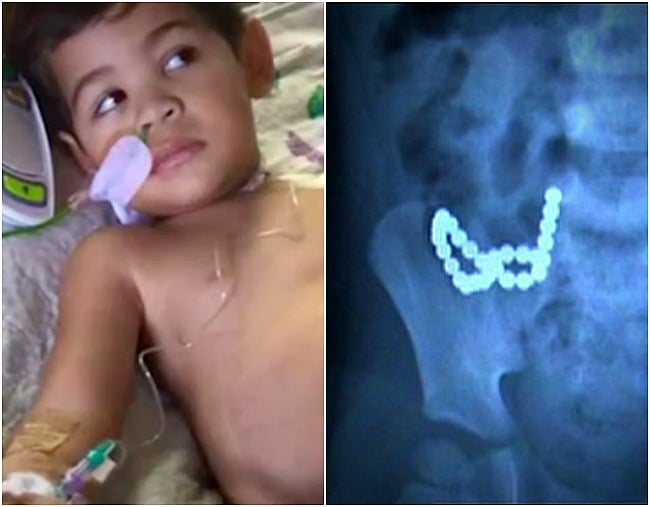 A Melbourne boy has sparked a warning about the dangers of small magnets, after he was rushed to hospital having swallowed 30.

Five-year-old Noah Lefau’s family told 7 News that he pulled a chair over to a fridge in order to reach the magnets, which he then ingested.

“Mum rang at lunchtime saying, ‘He’s on the ground, curled up in pain’,” Noah’s mother, Christelle Lefau, told the network.

The boy was taken to hospital where X-rays revealed the cause of his agony.

“I thought maybe it’s the little silver balls you use in cake decorating,” Ms Lefau said. “They said, ‘No, it’s metal’.”

A young Pakenham boy was hours from death after swallowing 30 fridge magnets. Doctors are warning parents of the dangers of leaving them within reach of children after seeing a rise in admissions to hospital. @georgiamain7 #7News pic.twitter.com/9IzeDajVTn

Surgeons took six hours to remove the magnets and repair the damage.

“They travel along the intestine and they are attracted to each other, trying to get together and by doing this, they create little holes inside the gut,” Monash Children’s Hospital’s Dr Maurizio Pacilli told 7 News.

“We had found 10 or 12 holes which we had to stitch one at a time, and we had to remove some parts of the intestine.”

Had doctors not treated him when they did, the outcome could have been tragic.

“If it was less than half a day longer, he would have died,” Christelle said.

Product Safety Australia recommends the following safe-use precautions for magnets: Keep toys with strong magnets, or magnetic parts that are small enough to be swallowed, away from young children; Always watch an infant when they are playing with toys that have magnets, to ensure they do not go in the child’s mouth; Always dispose of toys if their magnets become loose; If you suspect a child has swallowed magnets, seek urgent medical assistance.

2. Husband ‘jealous’ of wife’s Facebook friend before he killed her.

A Sydney man accused of smothering his wife of 41 years with a pillow was "angry and jealous" of her involvement with a man from high school who she had reconnected with via Facebook, a jury has heard.

Warren Francis Rogers has pleaded not guilty to murder but guilty to the manslaughter of Anne Rogers, 61, in their Milperra home in September 2016.

His trial began in the NSW Supreme Court on Monday before Justice Julia Lonergan.

Crown prosecutor Nanette Williams said the court would hear evidence Rogers, then 68, confronted his wife over her "ongoing contact" with the other man before the "fatal conflict".

Police found Ms Rogers dead in a bedroom and her husband "semi-conscious" in a bathtub of red water.

The court heard when an ambulance officer asked Rogers what had happened he replied: "She cheated on me four times. Stick a needle in my arm. I want to die".

He later told police his wife "asked him to kill her" so he smothered her with a pillow in the bedroom.

The couple separated for several weeks in mid-2016 but Rogers asked her to return "when he was unhappy being by himself" on the condition she have no further contact with the other man.

"The accused was jealous and angry with the deceased because she continued, against his wishes, to have contact with (the man)," Ms Williams said on Monday.

The prosecutor said "hand-in-hand" with that was Rogers' desire to maintain control of the family's finances including a $300,000 redundancy payout he received in the years preceding his wife's death.

"One way to prevent that, indeed, was to ensure that she didn't leave."

Defence barrister Richard Pontello said Rogers was a "true family man" whose behaviour was completely out of character.

He asked the jury to consider the defence of substantial impairment by abnormality of mind.

The marriage breakdown occurred "in circumstances where Ms Rogers had been seeing another man she knew from her high school years, Mr Pontello said.

"(He) for all but one day of his 69 years lived with the highest degree of integrity and love for those around him."

The lawyer said there was no dispute Mr Rogers caused his wife's death.

"However ... his capacity to control himself was in fact substantially impaired, arising from an underlying condition, namely the major depressive disorder from which he suffered and/or a chronic adjustment disorder."

3. 115 people charged with drug possession at Splendour in the Grass.

A BRISBANE teenager has punched a police officer in the mouth and tried to run away after allegedly being caught with drugs at Splendour in the Grass. When police searched the 18... https://t.co/hcZmUuQIli

NSW Police have charged 115 people with drug offences at the weekend's Splendour in the Grass music festival, including one man who was allegedly carrying almost 60 pills.

The festival, which takes place near Byron Bay on the state's north coast, saw 37,000 festival-goers flood through the gates.

Among them was a 25-year-old man allegedly carrying 57 MDMA tablets, a police spokesperson said on Monday.

A 42-year-old man was charged with assault occasioning actual bodily harm after he allegedly threatened a security guard with a piece of wood and then kicked him.

Police are also investigating the alleged sexual assault of an 18-year-old woman on Sunday night.

The festival saw NSW Health offer VIP tent access to anyone willing to be tested for chlamydia.

A spokeswoman on Monday told AAP the results were still being collated but the government had planned to conduct 3000 tests in a bid to help normalise STD checks.

4. Both Karen and Borce Ristevski's phones were switched off the day Karen disappeared, court hears.

Mobile phones belonging to accused killer Borce Ristevski and his alleged victim, wife Karen, were both deactivated on the day of her disappearance, a Melbourne court has been told.

The 54-year-old claims Karen, a fashion boutique owner, left the couple's Avondale Heights home in June 2016 after an argument to clear her mind, and never returned.

The 47-year-old's cause of death has not been determined.

Detectives claim Borce murdered his wife at home and drove her black Mercedes-Benz roadster to dump the body, killing the signal on his mobile phone along the way.

They claim he lied about where he was on the day of Karen's disappearance and made inconsistent statements.

Optus technical specialist Oleg Prypoten told Melbourne Magistrates Court on Monday that both the Ristevskis' phones were detected on June 29, 2016 - the day Karen went missing - before they were deactivated.

He said Optus could detect phones if they were on and even if they'd been left idle.

However, he said the couples' phones had been deactivated either because they had been turned off, switched to airplane mode, or run out of battery.

Court documents show Borce's phone was unable to make or receive calls between 11.09am and 12.51pm.

Karen's phone last pinged to a cell tower in Gisborne, near the Macedon Regional Park, at 11.40am.

But Optus couldn't pinpoint where the phones were last used as they could have pinged off a number of different stations within the area.

Earlier on Monday, police failed in their bid to prevent Mr Prypoten's evidence being reported by media, arguing it could reveal too much detail about their investigation methodologies.

Magistrate Suzanne Cameron refused the request, stating that what occurs during police investigations is regularly discussed in open court.

The court has previously been told the Ristevskis were in financial dire straits and would sometimes argue about money and business in the lead up to Karen's disappearance.

The committal hearing, which is expected to conclude this week, will determine whether Borce will stand trial over his wife's death.

A Perth teenager accused of killing his mother and two siblings has protested his innocence during a court appearance.

The bodies of his mother and brother were found inside their Ellenbrook home early on July 15. Bella was found critically injured in the backyard but died on the way to hospital.

Petersen-Crofts appeared on Monday in Midland Magistrates Court via video link from the secure Frankland Centre unit at Graylands psychiatric hospital, where he was last week sent for assessment.

Interrupting the magistrate, he said "I did nothing wrong" three times.

During his first appearance in the same court last week, Petersen-Crofts blamed "a criminal" for the killings, saying "he did it".

The psychiatric hospital has recommended he remain there for at least four weeks.

"If you're going to send me to jail for 25 years or whatever, I want to be in Frankland Centre. I don't want to go to jail," Petersen-Crofts said on Monday.

"They're going to kill me in jail."

He will face Stirling Gardens Magistrates Court on Wednesday via video link.

Nine Australian heroes involved in the Thai cave rescue will be honoured for their incredible efforts by Australia's political leaders and dignitaries.

Prime Minister Malcolm Turnbull and Opposition Leader Bill Shorten will be among those attending the reception at Government House in Canberra.

Mr Turnbull has previously described the mission to rescue 12 boys and their 25-year-old soccer coach as an extraordinary act of heroism, professionalism, discipline and teamwork.

It will be the first time the rescuers have been reunited since returning to Australia on July 13.

Adelaide anaesthetist Dr Harris and his dive partner, retired Perth vet Mr Challen, were among an international team of cave-diving experts who freed the trapped boys and their coach.

Sydney-based Chief Petty Officer Eather was a key figure in Operation Thailand Assist, having been involved in a number of significant mission since joining the Navy in 1991.

Thailand's ambassador to Australia and Australia's ambassador to Thailand, along with the acting chief of the Defence Force and acting Australian Federal Police commissioner, will be attending on Tuesday.

So too will various senior government representatives.

The names of the AFP medal recipients are being withheld until the ceremony.