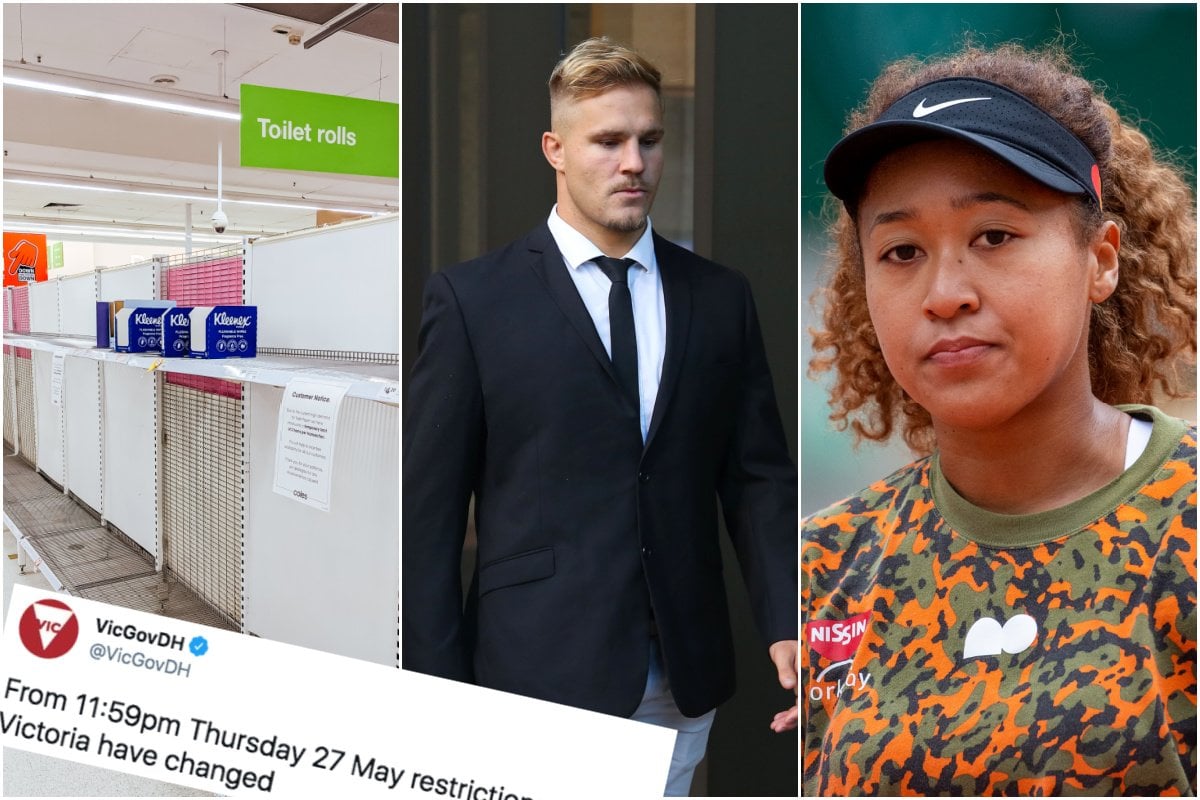 It's day one of Victoria's fourth COVID-19 lockdown and authorities are urging people to get vaccinated to ensure this is their last.

Four new local cases have been detected, bringing the Whittlesea cluster to 30.

Victoria's seven-day, statewide shutdown kicked in just before midnight on Thursday. People are now only able to leave home for five reasons - to shop for food and essential items, provide or receive care, exercise, work or study if they are unable to from home, and to get vaccinated.

Victoria's seven-day lockdown has thrown local businesses into crisis, with thousands of dollars worth of food thrown away and no safety net of JobKeeper.

How is your business coping with the lockdown? #9Today @IzaStaskowski pic.twitter.com/W7fB3pL0wo

To allow more Victorians to get the jab, those aged 40 to 49 are now eligible for the sought-after Pfizer vaccine.

"The vaccine is really our only ticket out of this," Health Minister Martin Foley said.

Some people waited on hold for hours on the state's coronavirus hotline to secure a booking on Thursday. The health department said it was flooded with over 77,000 calls in a 15-minute window but "technical issues" had since been resolved.

Other all-too-familiar rules Victorians now find themselves living under include a five-kilometre travel limit for exercise and shopping, and compulsory use of masks both indoors and outdoors.

From today in Victoria there will be a two-pack per person limit on toilet paper at Coles.

The lockdown, seeded in South Australian hotel quarantine, has again raised questions about the capability of Victoria's contact tracing system, which was partially blamed for the state's second 112-day lockdown.

Hundreds gathered outside Flinders Street Station on Thursday night to protest the latest shutdown before the stay-at-home rules came into effect.

READ: Everything you need to know about Victoria's snap 7-day lockdown.

"We would not be here." Lockdown blame game continues.

The Victorian government has laid blame for the latest coronavirus outbreak at the feet of the Commonwealth.

Acting Victorian Premier James Merlino was on Thursday clear the situation was the federal government's fault.

"If we had an alternative to hotel quarantine for this particular variant of concern, we would not be here today," Mr Merlino said.

He also took aim at the federal government's vaccine program.

"If we had the Commonwealth's vaccine program effectively rolled out, we may well not be here today."

Opposition leader Anthony Albanese told reporters in Canberra, "The government had two jobs this year - to get quarantine right and to get the rollout of the vaccine right."

But Prime Minister Scott Morrison, who has been critical of Victoria's handling of the pandemic in the past, refused to bite back. He said Victoria had ample vaccine supplies, but another 130,000 doses would be sent to the state.

He also gave his strongest show of support for the Victorian government's plan to establish a 500-bed quarantine facility on Melbourne's fringe.

Ex-Origin player de Belin will play his first professional match in more than two years on Saturday once rape charges are formally dropped by the NSW Office of the Director of Public Prosecutions on Friday.

The NRL will then register his contract with the Dragons, allowing de Belin to make his return in reserve grade at Lidcombe Oval against Western Suburbs.

De Belin is now free to take up a four year deal, worth $3 million, that he previously signed with the Dragons. https://t.co/33bRVfChS1

The NSWRL will bolster security for the match to counter any possible backlash from spectators, while Abdo admitted he did not know how de Belin would be received in his return.

Earlier this month a second jury could not reach a verdict on rape charges against him and friend Callan Sinclair, related to an alleged sexual assault of a teenager in Wollongong in December 2018.

The DPP indicating on Thursday they would not push for a third trial.

The former Wallabies representative is hoping to play for Gold Coast third-tier club Southport Tigers, in a bid backed by the financial muscle of outspoken businessman Clive Palmer.

The QRL said on Wednesday it could not proceed with Folau's registration until they received a clearance from Catalans, the French-based Super League club the 32-year-old signed for after receiving a settlement from Rugby Australia.

Israel Folau is planning to take legal action against Queensland Rugby League after being told he couldn't play until he received a clearance from his former French club. pic.twitter.com/pY7XPrrEYk

Folau had his contract with RA torn up in 2019 after a series of homophobic social media posts.

He joined Catalans in January last year and extended his deal until the end of the 2021 campaign last July.

While the QRL said Folau's controversial social media posts do not align with their beliefs, they were willing to grant Folau permission to play with the Tigers "at a community rugby league level and no higher" should Catalans provide a clearance.

In a statement, Sam Iskander from Alexander Law said the QRL's conditions for approving Folau's registration were different to any of his potential teammates at the Tigers.

"We can only conclude it is because of his religious beliefs."

Tennis star Naomi Osaka says she is not going to speak to the media during the French Open.

The world's highest-earning female athlete wrote in a Twitter post on Wednesday that she hopes the "considerable amount that I get fined for this will go towards a mental health charity".

The second grand slam of the year is scheduled to begin on Sunday in Paris.

The 23-year-old Osaka, who was born in Japan and now is based in the United States, has won four major titles.

"I've often felt that people have no regard for athletes mental health and this very true whenever I see a press conference or partake in one," world No.2 Osaka wrote.

Osaka said the decision was "nothing personal" against the tournament or journalists.

"I've watched many clips of athletes breaking down after a loss in the press room and I know you have as well," she wrote.

"I believe that whole situation is kicking a person while they're down and I don't understand the reasoning behind it."

Egypt has invited Israel, Hamas and the Palestinian Authority for separate talks that aim at consolidating the ceasefire that ended an 11-day war between Israel and the Gaza Strip's militant Hamas rulers, Israeli media and an Egyptian intelligence official say.

The talks would also focus on accelerating the reconstruction process in Gaza.

"We are seeking a long-term truce, that would enable further discussions and possibly direct talks," said the Egyptian official, who had close knowledge of the proceedings that had led to the ceasefire and who spoke on condition of anonymity because he wasn't allowed to brief reporters.

Egypt planning Cairo talks between Israel and Palestine leadership, including Hamas, to discuss rebuilding bombed-out Gaza and the ceasefirehttps://t.co/TJJKKbkene

Preliminary estimates have put the damage in the hundreds of millions of dollars.

Egypt was key in mediating a deal between the two sides but much still hangs on turning the tenuous ceasefire into a more permanent truce.

He said the talks could start as early as next week and that Israel has given its initial approval but that a final agenda is still in the works.

The packers chose the celebrated soul, jazz and pop artis's portrait from 52 finalists' works on display at the Art Gallery of NSW.

#BREAKING: A portrait of ‘dignity and power’ of Kate Ceberano has won the Packing Room Prize.https://t.co/Phx5ldfMx7

There were 938 entries submitted for the Archibald Prize, which is celebrating its centenary.

The finalists for the Archibald Prize include portraits of Grace Tame, Craig Foster and the biosecurity expert Professor Chandini Raina Macintyre.

- In his first interview since his crash, Tiger Woods says "walking on my own" is his "number one goal" as he continues to recover from the multiple leg injuries.

- Plans are underway to build the second tallest skyscraper in the world in St. Petersburg, Russia, standing at 703 metres behind Dubai's Burj Khalifa at 828 metres.

- The likelihood that the earth's average temperature at least temporarily breaching a crucial tipping point is rising, according to the World Meteorological Organization (WMO).

Reply
Upvote
1 upvotes
I dunno - I don't think that it's too torturous to front the press after a loss. Losses are an inevitable part of sport and sponsors pay athletes for this access on game day. The tournament also needs publicity to fund purses.
Sounds a little unsportsmanlike and naive to me.

Reply
Upvote
1 upvotes
@gu3st I guess if she's happy to cop the fine, its fair enough. Athletes do have to take losses well, but I think it's hard for tennis players in particular because they have a team whose income relies on their personal success- I cant think of another sport where individuals have the same level of press attention. It's a bit easier if you're part of a team and the responsibility is spread across a bunch of athletes.
News
General
Opinion
True Crime
Politics
Sport
Explainer
Entertainment
Celebrity
Reality TV
Movies
TV
Books
Rogue
Royal
Lifestyle
Beauty
Fashion
Weddings
Home
Wellness
Health
Fitness
Travel
Food
Parents
Before The Bump
Pregnancy
Baby
Kids
Teens
School
Parent Opinion
Work & Money
Money
Finance
Career
Lady Startup
Relationships
Sex
Dating
Separation
Friendship
Family
Real Life
Couples