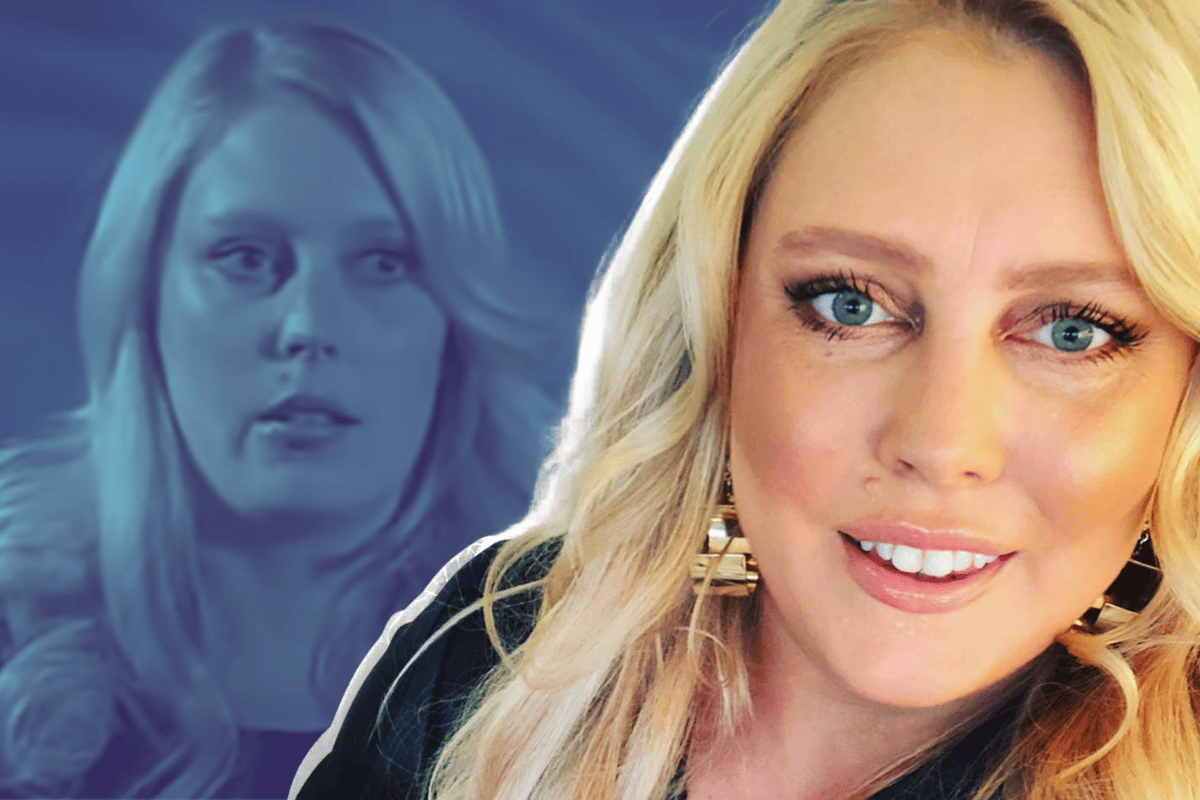 Warning this post mentions suicide and may be triggering for some readers.

Mel Greig was asleep in bed when the messages first came through.

'You have blood on your hands.' 'You're a murderer,' they read.

After being woken up by her partner at the time, Mel read through the messages on his phone.

"I didn't know what had happened or what had gone on," Mel told Mamamia.

A person from the 2Day FM radio station Mel worked for, told her a nurse in England, who they prank called days earlier, had died by suicide.

One question immediately rushed to Mel's mind; "Was she a mother?" she asked.

The person on the other end said yes.

"I don't remember the next six hours after that."

In fact, the days following were a complete blur.

TV interviews were set up, death threats poured in, security guards were assigned, blinds were drawn.

"We had to basically go into hiding."

Watch: Mel speaks to SBS on an upcoming episode of Reputation Rebuild. Post continues below.

Days earlier, on December 4, 2012, Mel, who was working at her dream job, prank called the King Edward Hospital in London with her 2Day FM co-host Michael Christian.

The now infamous call, which Mel says her whole team agreed upon, saw the radio hosts pose as the Queen and Prince Charles to try to find out information about Kate Middleton's health during a hospital stay while pregnant with Prince George.

Mel never expected her and Michael would be put through to the nurse's line.

But when the phone rang around 5:30am local time, Indian-born nurse, Jacintha Saldanha, picked up.

The 46-year-old mother-of-two believed the call was genuine and put it through to another nurse who disclosed details of Kate's condition.

After the call, Mel told Mamamia she requested to have the nurses' voiced dubbed before the clip was aired on the radio as she didn't want them to feel 'humiliated'.

However, the request was declined and the audio was played for the world to hear.

Three days later, Jacintha was found dead after taking her own life. Mel and Michael were named in her suicide note.

The pair were "shattered" by the news and fronted cameras to apologise.

"There's not a minute that doesn't go by that we don't think about her family and what they must be going through and the thought that we may have played a part in that is gut wrenching," a Mel tearfully told A Current Affair at the time.

In the months following, Mel became the public face of the tragedy and was met with thousands of death threats.

"There were hundreds every day for about three months and then they continued consistently for two years," she shared.

"At the start there was some really severe ones like 'I'm going to gut you like the pig that you are'," as well as death threats directed towards herself and her late mother.

"Someone also sent bullets with our name on it to a local police station."

The threats and public backlash quickly started to take a toll.

Mel developed a severe mental illness, with both herself and her parents needing psychological care.

"When you have a mental health illness and someone tells you to go kill yourself, you start to contemplate whether that is an option for yourself. And it shouldn't be an option for anyone."

For the next year, Mel saw a psychologist and a psychiatrist every week and was placed on medication.

She eventually decided to leave her dream job after 15 years of radio in 2013.

A year later, she flew to England to voluntarily attend the inquest into Jacintha's death.

For Mel, it was a chance to finally look Jacintha's family in the eyes and apologise for the role that she played. 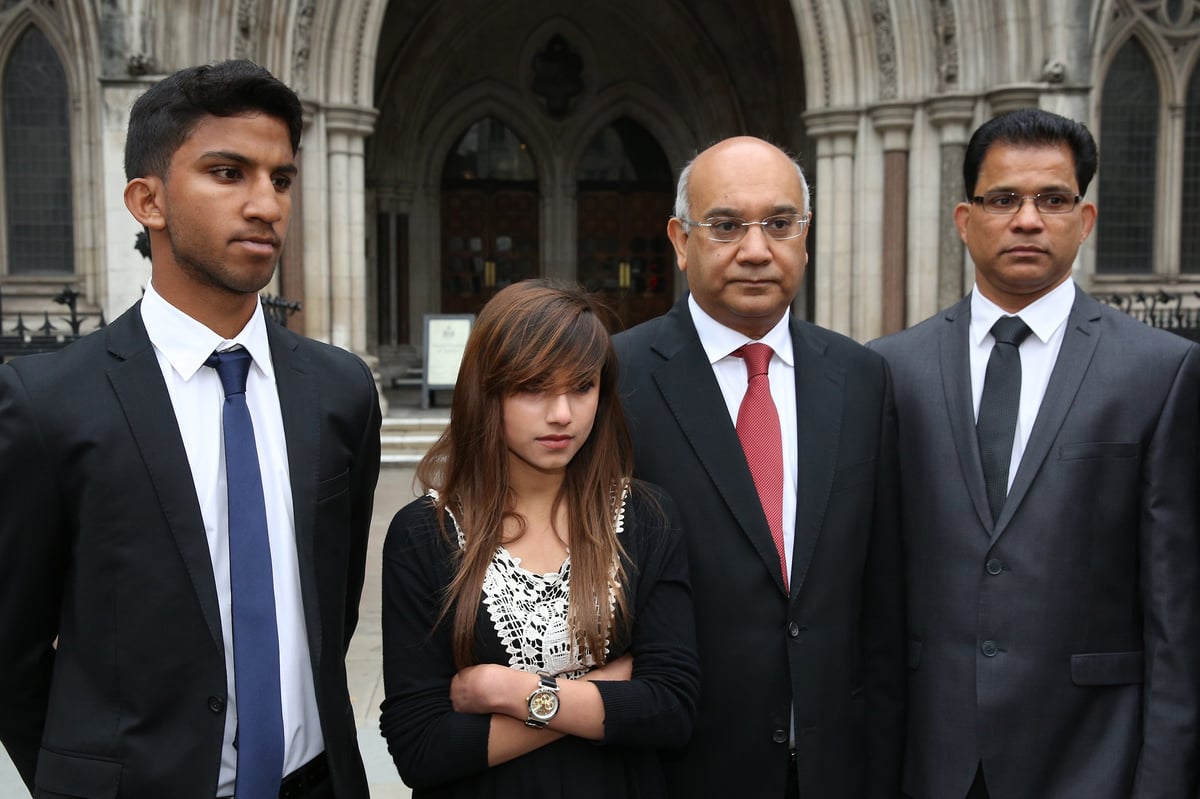 Benedict Barboza (R), husband of Jacintha Saldanha arrives at The Royal Courts of Justice with his son Junal (L) and daughter Lisha and Member of Parliament Keith Vaz (2R) on September 11, 2014 in London, England. Image: Getty.

Mel said being in the same room as Jacintha's family felt "kind of surreal".

"It was quite heartbreaking to see what the prank call had done to so many people."

There was even one moment when she connected with Jacintha's daughter during the inquest.

"I could tell that she knew that I was sorry. And she was upset in that moment but for me as well as her mum. It gave me closure from that point and I could try and finally move forward."

"I just kept fighting for my life. I wanted to get better and I spent years getting better for my mental health illness."

During that time, she focused on herself and worked to address the feelings of grief and guilt she'd been harbouring.

"I've always focused on the family and they went through something worse, but I neglected my own trauma. I needed to realise that I went through trauma as well. And I needed to spend time healing that and [understand] it's okay to see myself as a victim because I was and I needed to focus on that side of it as well."

The experience also gave Mel the resilience to deal with the loss of her mother to pancreatic cancer in 2015 and divorce from her partner, Steve Pollock, in 2017.

These days, she's come to forgive herself for the prank.

"I'll always feel bad about what happened. But if I hang on to that grief, I'll never move forward."

However, 10 years on, she still feels the lasting effects of the less than a minute-long phone call.

In 2015, she returned to radio a brief two-year stint at Illawarra's Wave FM 96.5. But with her reputation tarnished, she's "constantly" struggled to find a job throughout the years.

"I applied for over 100 jobs and got 100 nos back. A charity wouldn't even take the risk of letting me work behind-the-scenes stuffing envelopes. I just wanted to do good things for my soul again, and no one was giving me that chance."

She's now landed a job as a public relations and media manager. But she knows her reputation will always follow her.

"I wish I didn't have that title. I don't like to be associated with what happened, but it is a part of my journey. And I have to accept that and there's nothing I can do to change that."

The past also rears its head in her dating life.

"People ask about your past and what you do for work and what have you done previously? How do I explain what's happened to people? How many dates am I going to have to go on and explain it from the start again? I just can't do that."

Now in her 40s, she's recently decided she's happily single, and enjoys living life on the Gold Coast with her pet Mia the Moodle.

"10 years ago, I was living my dream life living in a penthouse hanging out with celebrities and private booths in nightclubs, interviewing the world's biggest stars. And now my favourite thing that I get to do each day is walk my Moodle on the beach in peace."

Looking back, Mel recognises the difference between how her and her co-host, Michael, were targeted by the press and the public over the years.

"When you look back at it, I can say that I was the emotional, vulnerable female, that's why the press was fixated on me. It was my face that was on the front page of every newspaper in the world.

Unfortunately, Mel still gets trolled on social media. Just two weeks ago she was called a 'murderer'.

To help others online, she's become a strong advocate for mental health and cyber-bullying and spearhead the 'Troll Free Day' in 2016, among other initiatives.

"I went around to schools and created a radio special and spoke to these kids about cyber bullying," she explained.

"The biggest killer of our young is suicide, and cyberbullying plays a big part in that. So I spent a few years focusing a lot of time and my own money on helping as many kids across Australia as I could."

Outside of mental health, Mel is also an ambassador for Endometriosis Australia, having suffered from the condition since she was 16.

10 years on from the call, she reminds other radio presenters partaking in pranks to "remember that the joke needs to be on us always".

She also wants everyone struggling with mental health issues, as she has, to remember to "always choose life".

"I know that life is tough and you can reach a very dark place, but there is a way through. And you just have to, in that moment, choose life. And I promise you when you do each day will get better."

Mel will appear on Reputation Rebuild tonight at 8.30pm on SBS and SBS On Demand.

Reply
Upvote
Tonight I watched Reputation Rebuild on SBS On Demand.  Thank you Mel for your honesty and consistency your remorse that you have spoke about. Even though 2 persons were involved you were made the “public face of the tragedy”. Why ? - in my opinion because you were the female. I cannot believe that in todays world this still rings true. If anyone still has an opinion that may not be kind about Mel please watch Reputation Rebuild on SBS On Demand.
G
gypsy 3 months ago

Reply
Upvote
1 upvotes
Mel obviously felt dreadful due to the result of the joke but in all honesty it didn’t justify the actions of the nurse. I would think she was delicate anyway and looking for an excuse. No one could predict that a person would do that.
M
megmag 3 months ago

Reply
Upvote
4 upvotes
@gypsy I disagree. Just imagine if you were in your work day and got a phone call that you believed was legitimate, and then did/told that person something related to your work. Which had national and international consequences. I don't know how somebody deals with that or comes to terms with it. Mel herself has struggled with what her actions caused.
I can feel sympathy for Mel and the vitriol she received, but I think this article should also have gotten the perspective of Jacintha and her family, who are the true victims of this situation. And even if Jacintha was already dealing with mental health and emotional issues -- this is a good reminder that we never know what someone is going through, so it's important to be kind to others and choose compassion over humour.
M
mamamia-user-482898552 3 months ago

Reply
Upvote
2 upvotes
@megmag Yes, I think it's time for the perpetrators to stop dining out on this story - the real suffering is centred not on them, but the family.
Overall, the whole prank was deeply unethical - all involved should have been sacked. It's NEVER appropriate to call a hospital as a joke and make enquiries about someone who is admitted there. That's someone's private medical history, and another person's workplace that they used as a setup for a really tasteless, unfunny "joke" - all broadcast to the public for the sake of ratings.
G
gypsy 3 months ago

Reply
Upvote
2 upvotes
@megmag   It was an over reaction.
B
beachhouse84 3 months ago