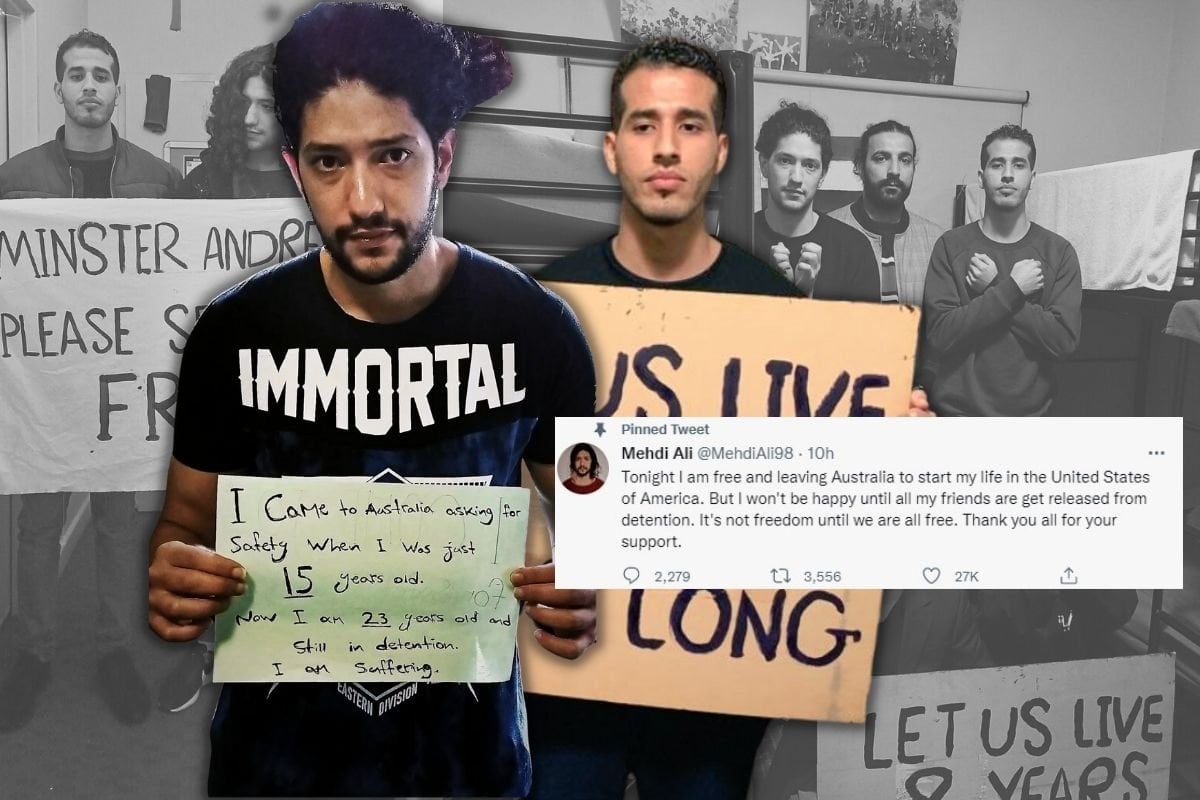 They'd fled from Iran where they faced systemic oppression as members of the Ahwazi Arab minority.

When they got here, they were sent to Christmas Island where they remained for nine months, before being shunted from detention facility to detention facility both on and offshore. They'd end up staying locked up - their only crime seeking a safe place to live  - for nine whole years.

Watch: A message from Medhi, Adnan and their friends. Post continues after video.

On Thursday night, the now 24 and 25-year-old men announced they'd suddenly been set free. Their stories were catapulted onto a global media stage in January when world tennis No.1 Novak Djokovic found himself in their latest prison - a Melbourne hotel.

But they're not free to roam the streets of Australia. Instead, they're headed to America to start their new lives.

The life they fled.

Ahwazi Arabs are one of Iran's most persecuted minorities.

A 2013 Ahwaz Human Rights Report detailed a campaign of execution, use of torture, the denial of women's rights and environmental destruction of the Ahwazi Arab homeland.

"Extrajudicial killings of Ahwazi Arabs are at least as frequent as official executions of political prisoners," the report said.

"It is clear that the slaughter of Ahwazis is linked to their cultural persecution."

It was released the same year that Mehdi and Adnan fled, at the insistence of their families.

I came to Australia asking for safety when I was just 15 years old.
Now I am 24 and still in detention.
If I'm not a refugee, why would I endure such a difficult time as a child if I have the option to go back to where I came from? Even then, I'm not safe in detention either. pic.twitter.com/yrFMWt9AyR

The teenagers didn't know eachother in childhood, leaving their country independently, and coincidentally finding themselves on the same overcrowded fishing boat on its way to Australia in the July of that year.

They were intercepted by the Australian navy and given boat IDs - ANA020 for Mehdi, ANA023 for Adnan - and have remained by eachother's side, behind bars, ever since.

While they were at sea, then Prime Minister Kevin Rudd announced that all boat-borne asylum seekers would never be allowed to settle in Australia. Instead, he said, they'd be processed offshore and if found to be refugees, would be resettled on Papua New Guinea or Nauru.

"As of today, asylum seekers who come here by boat without a visa will never be settled in Australia," were Rudd's exact words.

"I understand that this is a very hardline decision.

''But our responsibility as a government is to ensure that we have a robust system of border security and orderly migration, on the one hand, as well as fulfilling our legal and compassionate obligations under the refugees convention on the other," he continued.

It was the strongest line a modern Labor prime minister had taken against asylum seekers. His successor Julia Gillard maintained that line, defending the approach as one designed to deter people from making dangerous boat trips.

Under the three Liberal governments that've followed, there has been no reprieve.

"We can't stand the torture." A life locked up.

While being processed on Christmas Island, authorities decided in an age assessment of the boys that Adnan was 10 years older than his cousin.

While Mehdi was sent to live with other families and minors, the 16-year-old was housed with grown men.

The boys remained separated for nine months until they were moved to Nauru in 2014 and housed together in the family camp, after a reassessment of Adnan's age.

“The boys were still kept in a cage within the camp," one of their old teachers Gabby Sutherland from Save the Children told Aljazeera.

The cage was a sectioned off part for unaccompanied minors within the family processing centre.

Finally, by the end of that year, their claim for refugee protection was formally recognised. They had a “well-founded fear of persecution” in their home country, and could not legally be returned there. Australia was legally obliged to protect them.

But that wouldn't set them free.

Every night at 8 o’clock we protest the 8 years of prison we have suffered. I came here at 15 of age. I am now 23. Where were you 8 years ago? How has your life changed? Imagine being in prison that whole time when you only wanted safety. So many lost moments. #8YearsTooLong pic.twitter.com/rGizsTyero

Mehdi now has PTSD from his time spent in the Nauru Australian Immigration Detention Centre. There, he watched friends burn themselves to death, was beaten, and describes a youth spent "fighting to survive." After one particularly bad experience - when the teenagers were temporarily sent to live in accommodation on the island - Adnan sewed his lips together in protest.

In 2016, the UN High Commissioner for Refugees reported the rates of mental illness of asylum seekers and refugees in Nauru and PNG to be among the highest recorded in any surveyed population. Children in particular were among the most traumatised paediatricians had seen.

In 2019 Mehdi and Adnan were brought to Australia under medevac laws brought in in the wake of the documented mental health crisis in Nauru. Under the process, asylum seekers and refugees could be transferred to Australia for medical treatment if two doctors recommended it. Ever since, they've been held in onshore detention centres and when COVID hit, that became guarded hotel rooms in Brisbane and then Melbourne.

They were regularly told they were in the queue for resettlement in the US as part of a resettlement deal made with America in 2016. The deal was that the US would resettle up to 1,250 refugees and in return Australia agreed to resettle refugees from Costa Rica. But the line never appeared to move.

"When I was detained in the hotels, it was a different kind of torture watching the city and the cars and the people living their lives but I don't get to. I only got to watch them and fantasize, but my thoughts were mixed with sadness and pain," Mehdi wrote online last year.

"We can't hold it in anymore and we can't stand the torture. We are suffering so much. They're breaking our spirit and we can't do it anymore," he added, in a separate tweet.

I've been tortured by Australia since I was 15 years old. Now I'm 24 years old and they are still torturing me. What kind of country is this?

Our 4 night of peacfull protest at BITA we been asking for safety but we get 8years detention and time behind bar no crime no harm just asking asylum in Australia what a HUMAN RIGHT and DEMOCRATIC government we are faceing!#letusfree #letuslive #8yearstoolong pic.twitter.com/smNkZgclOm

The cousins' only 'crime' is asking Australia for safety. And yet as Mehdi points out, he's served more time locked up than hardened criminals.

"I've served more time than rapists, but I've never committed a crime in my whole life... a murderer might probably be out on probation by now," wrote Mehdi in January.

Novak Djokovic and a global spotlight.

When world tennis No.1 Novak Djokovic arrived in Melbourne in January ahead of the Australian Open, he found himself in immigration detention alongside 33 refugees being held inside the Park Hotel in Carlton.

He was there because he was unvaccinated, therefore breaching Australia's international arrival rules. But as supporters milled downstairs with Serbian flags, and the world's media covered the story - attention turned to the men who had been forced to make those hotel rooms their home.

While Djokovic's stay was only fleeting, Mehdi and Adnan had been held in that particular facility - with a room each - for five months. Other men held alongside them had been there years.

It's so sad that so many journalists contacted me yesterday to ask me about Djokovic. I've been in a cage for 9 years, I turn 24 today, and all you want to talk to me about is that.

Pretending to care by asking me how I am and then straight away asking questions about Djokovic.

Their rooms had no fresh air and mouldy and maggot-infested food. And suddenly, news outlets across the world were reporting on the plight of Australian refugees - disgusted with our government and what they saw.

But as Djokovic supporters and the media pack abandoned their posts once the athlete had been let out, the men left behind went back to their mundane reality.

It's getting harder here..

"My sudden release should make it clear that the #ausgov is in a breaking point," wrote Adnan on Twitter last night.

He and his cousin are on their way to America, where they can finally start their lives as free men.

The Guardian reports Mehdi and Adnan are among the last two to be resettled as part of the American deal.

They're ecstatic, of course. But it's a bittersweet goodbye.

"I won't be happy until all my friends are get released from detention. It's not freedom until we are all free," said Mehdi.