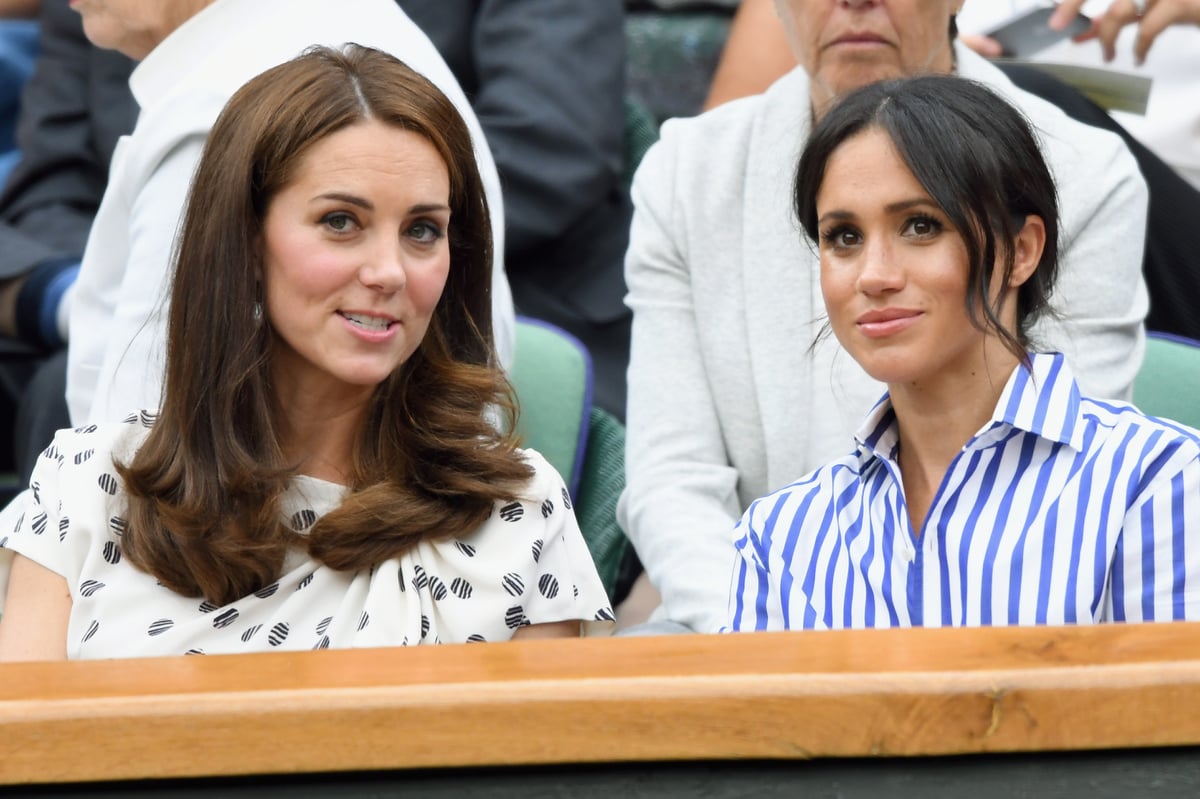 On Monday, Prince Harry and Meghan Markle sat down for their long-anticipated interview with Oprah Winfrey.

The wide-ranging interview, which has since been viewed by millions worldwide, covered everything from Harry and Meghan's royal wedding to their relationships with other members of the royal family.

But as many expected, the most prominent focus of the interview was the couple's years-long struggle with the British press.

Watch the moment Prince Harry spoke openly about Meghan Markle's mental health during the birth of their son, Archie. Post continues after video.

During the interview, Meghan admitted that she struggled with suicidal ideation after years of harsh criticism from the British tabloids.

"I just didn’t see a solution. I would sit up at night, and I was just, like, I don’t understand how all of this is being churned out," Meghan said.

"I realised that it was all happening just because I was breathing. I was really ashamed to say it at the time and ashamed to have to admit it to Harry, especially, because I know how much loss he’s suffered. But I knew that if I didn’t say it, that I would do it. I just didn’t want to be alive anymore. And that was a very clear and real and frightening constant thought."

Since their relationship went public in 2016, Harry and Meghan have remained outspoken about the media's treatment of the Duchess of Sussex.

When they first started dating, Harry issued a rare public statement, pleading to the media – and the general public – to stop the "wave of abuse and harassment" and "outright sexist and racist comments" against Meghan.

"It is not right that a few months into a relationship with him that Ms. Markle should be subjected to such a storm. He knows commentators will say this is 'the price she has to pay' and that 'this is all part of the game.' He strongly disagrees. This is not a game — it is her life and his."

Similarly, the couple launched a lawsuit against the Mail on Sunday in October 2019 after the tabloid published a private handwritten letter Meghan sent to her father, Thomas Markle, in August 2018.

Listen to Mamamia's daily entertainment podcast, The Spill, below. Post continues after video.

But while speaking to Oprah on Monday, Harry and Meghan both emphasised that they experienced a lack of support from the royal family while they were struggling to deal with the British press.

In new footage from the interview, which aired on CBS This Morning on Tuesday, Meghan shared that instead of providing support, the royal family simply tried to compare her experience with their own experiences with the British tabloids.

"Members of his family say, 'Well, this is what's happened to all of us,' [as] if they can compare what the experience that I went through was similar to what has been shared with us," the ex-Suits actress said.

"Kate was called 'Waity Katie,' waiting to marry William. While I imagine that was really hard — and I do, I can't picture what that felt like — this is not the same," she added.

"And if a member of his family will comfortably say, 'We've all had to deal with some things that are rude,' rude and racist are not the same."

Speaking to Oprah, Harry and Meghan both claimed that Meghan's treatment in the media was different due to Meghan's race and her outsider status as an American.

It was a claim that was well-founded.

After all, one only has to look at the headlines to understand that Meghan has long been held to an entirely different standard than other members of the royal family, including the Duchess of Cambridge. 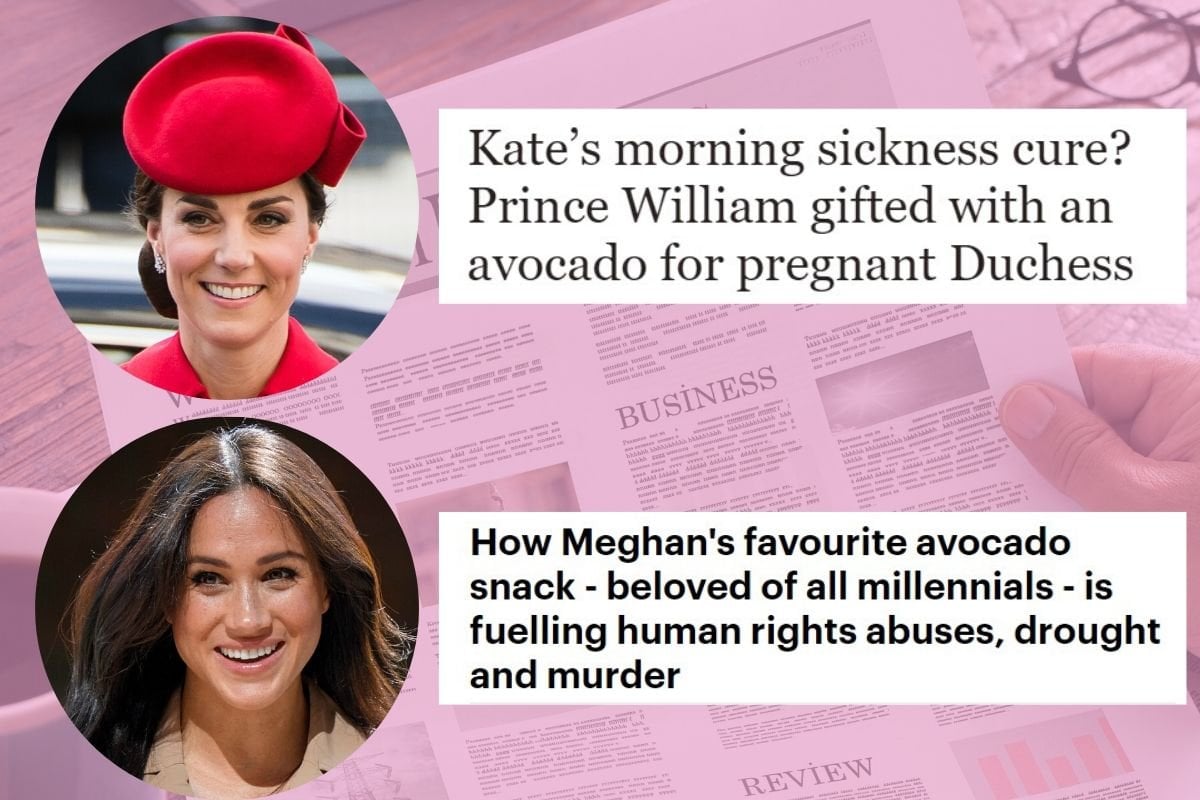 As pointed out last year, the contrast between the reporting on Meghan Markle and Kate Middleton has been incredibly stark.

In a study conducted by The Guardian in 2020, 43 per cent of headlines published about Meghan since 2018 were found to be negative in tone, compared to just eight per cent for Kate.

In some headline examples, Meghan and Kate were treated entirely different for doing the same thing. While Meghan was endlessly criticised and shamed, Kate was celebrated.

Good grief. I had no idea how much of this shit she’d put up with - and I have to follow the news for work. pic.twitter.com/ZkxEitOHxp

In one particular instance, Kate was described as "tenderly cradling" her baby bump, while Meghan was slammed for constantly cradling her own baby bump.

In another example, Kate was celebrated for her "homegrown" bouquet of wedding flowers that followed "royal code", while Meghan was criticised for potentially "putting Princess Charlotte’s life at risk" with her choice of wedding flowers.

When looking at the labels Meghan and Kate have been given, the double standards in the British media become even more apparent.

While Kate has long been praised by the tabloids for her 'dignity' and 'poise', Meghan has been given nicknames ranging from 'Hurricane Meghan' to 'Duchess Difficult'.

Even today, the Daily Mail celebrated 'dignified Kate' for carrying on with her royal duties after Meghan and Harry's tell-all interview.

In comparison, author Edwin Hayward pointed out that over 120 negative articles have been published about Meghan Markle across four British news websites in the past 24 hours.

This is what institutionalised bullying and racism looks like.

One headline in particular (highlighted below) deserves special attention. pic.twitter.com/UotSb9xjWM

By comparison, the Sun is practically a model of probity with a mere 28 aggressive headlines yesterday.

(Theirs tend to be even more vicious than the Express bile. Where they lack in number they make up in impact). pic.twitter.com/Ef2yDbZOhK

If you're following along, that's 128 almost unanimously negative (many VERY hurtful and offensive) articles about Meghan Merkle across 4 newspaper websites in 24 hours.

There is a terrible sickness in parts of the British media.

When these labels and stereotypes are continually used by the media, it perpetuates a damaging narrative. A narrative where a woman can be labelled as 'difficult' for simply speaking up.

As Meghan's biographer, Omid Scobie, told Insider: "Meghan hasn't really been able to step away from that 'Duchess Difficult' character, and it leaned into some really clichéd stereotypes that I think are quite dangerous to still use."

He continued: "Particularly when we're talking about successful women of colour — being called too difficult, too demanding, too ambitious... these are things we hear time and time again."

Reply
Upvote
Duchess Kate needs to nuke the royal family now; just to even things up a bit. It’s only fair.. :)

Reply
Upvote
In one sense those "dignified" headlines are appropriate. Catherine will make the perfect Queen Consort. She doesn't have to think. She can wear boring clothes and she can be "nice." In contrast Meghan is spirited, highly intelligent and wants her voice to be heard. This is why, if it could all have been done differently, she and Harry would have been such an asset to an otherwise boring as bat shit family who always do the right thing. Sadly that opportunity was missed.

Reply
Upvote
3 upvotes
@leigif Meghan wanted her voice to be heard, i.e. the ability to sprout  her own opinions, the Royal Family was hardly the vehicle to do that.

Reply
Upvote
2 upvotes
@leigh A lot of people don’t seem to understand that the Queen (Head of State) and the working royal family (by extension) play a unique role in UK & foreign diplomacy. In order to stay above the political fray they do not publicly voice strong political or personal opinions. This is the role. It’s very different to celebrity.
Kate’s role is not to be a celebrity so she doesn’t try to be one. Her role as a public servant is to shine the light on others not herself.
News
General
Opinion
True Crime
Politics
Sport
Explainer
Entertainment
Celebrity
Reality TV
Movies
TV
Books
Rogue
Royal
Lifestyle
Beauty
Fashion
Weddings
Home
Wellness
Health
Fitness
Travel
Food
Parents
Before The Bump
Pregnancy
Baby
Kids
Teens
School
Parent Opinion
Work & Money
Money
Finance
Career
Lady Startup
Relationships
Sex
Dating
Separation
Friendship
Family
Real Life
Couples