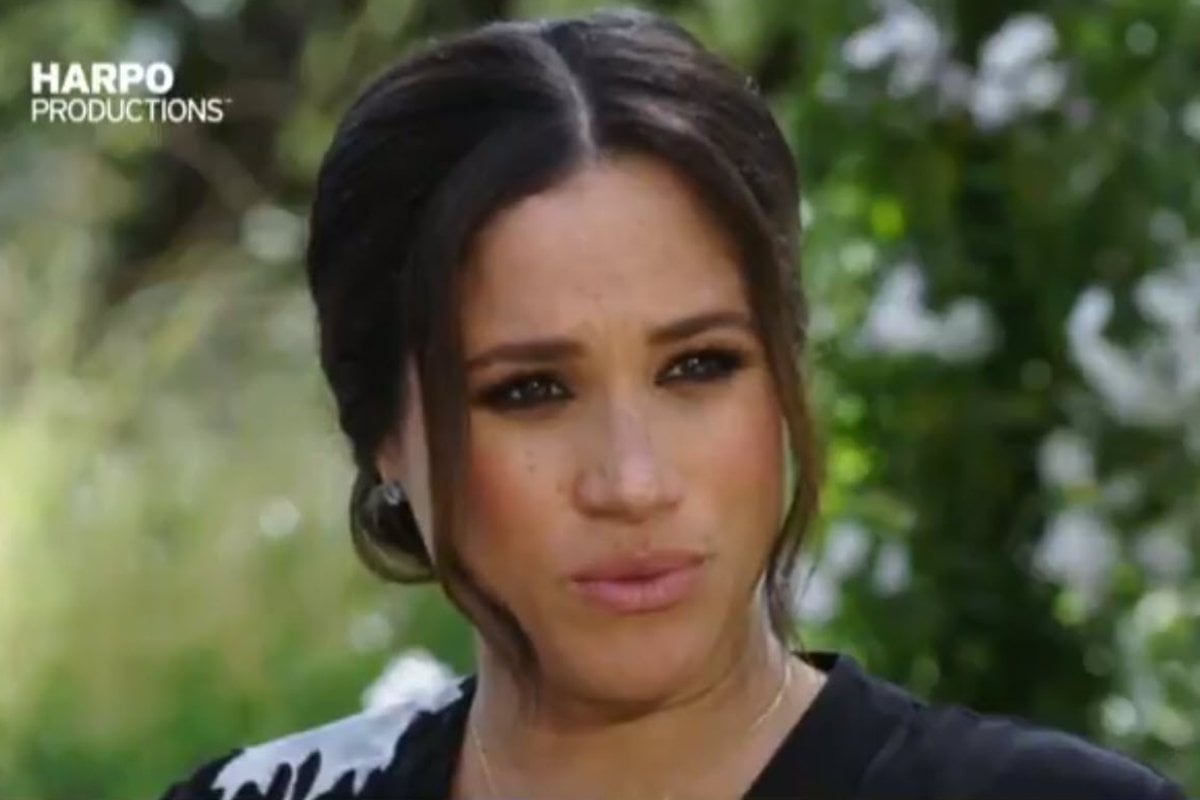 As a Black British woman (quite light in tone, if anyone is asking!), reading the post Meghan and Harry interview commentary has been almost as enlightening as watching the interview itself.

As I expected, many have taken the attitude that this is just another piece of self-serving publicity for the couple who want to have it all.

But everything Meghan says makes perfect sense to me, especially if you factor in the cultural divide.

Watch: Meghan chats to Oprah about the firm "perpetuating falsehoods". Post continues below.

As Meghan herself alluded to during the interview, she did not know much about how the Royal Family worked.

However, those from the UK (even if anti-monarchy) have an innate, inbuilt sense of how Royalty should be treated and indeed how they should behave.

The very act of talking to Oprah and exposing Royal secrets will be seen by many Brits and indeed monarchists everywhere, as a back-stabbing betrayal, a step that few would be game enough to take, not least for fear of repercussions from the establishment.

To go on national television and expose the Royal Family like that just isn’t cricket and is – let’s face it – so American.

Because the American psyche does differ from the British.

Rather than a society built on serfdom and the repressive class system, America (whether it’s true or not) imagines itself as the home of the free, a place where you are free to speak your truth and it’s important that you do so.

So, whereas many Brits would view Meghan’s actions as purely self-serving, I fully understand her decision-making process. Because when Harry decided to marry a Black woman every Black person knew that it was a big deal! Even if Harry himself, as he says in the interview, didn’t.

We all knew that the racist trolls in our society would be having a total meltdown about the “purity of the Royal lineage being tainted with black blood,” and we also knew that the right-wing press in the UK would be happy enough to fan the flames of that fire.

What we couldn’t imagine was the loneliness and isolation Meghan felt, trapped in an institution that placed the public image of the product over the players; where mental health issues were viewed as a bad show best kept quiet and where your life was lived in the sort of controlled environment (being told you cannot go out with your friends because you will attract too much attention) that in any other household would be considered abusive.

And then of course there was the final insulting question of how dark the baby would be.

In one of the commentary feeds I read, somebody wrote: "It’s not such a big deal. It’s just like asking about the colour of the baby's eyes or hair."

No! It isn’t! And it harks back to the dark days of slavery and the need for chattel classification.

Oprah was shocked and horrified; I didn’t really understand why she was even surprised.

Because despite various charity work and social programs initiated by some members of the Royal Family, in general you wouldn’t accuse them of being “woke”.

Many of the lynch-mob are now gunning for Harry – calling him weak and entitled, with the subtext being that Harry is “whipped” and it’s obviously Meghan who “wears the pants.”

Which is the perfect example of how far society still has to go in terms of real gender equality. Because, as long as making major life changes and personal sacrifices to support your wife’s happiness are considered signs of weakness, we have a problem.

I’m not really sure what the Duke and Duchess of Sussex hoped to gain from their interview.

Poor Meghan is in a lose-lose, Catch-22 situation. If she said nothing people would think the worst, but in speaking out she’s made an unforgivable detour from convention that could lead to more pain and censure coming her way.

I just hope that telling her truth has given Meghan the peace of mind she was looking for.

After a long break from writing; past magazine editor and feature writer Debbie Somersall is taking up the pen again from her new home in Nhulunbuy, Arnhem Land.

Reply
Upvote
“Because, as long as making major life changes and personal sacrifices to support your wife’s happiness are considered signs of weakness, we have a problem.” - well said!

Reply
Upvote
2 upvotes
There is an absolutely beautiful article written today by Sir Kenneth Olisa who is the Queen’s first black Lord Lieutenant of Greater London. His story creates an excellent juxtaposition to the pile on of hate, anger and division we are currently seeing.

Reply
Upvote
2 upvotes
@chrissyinthemiddle Once the twitterati  get after him, he will soon backtrack with his statement