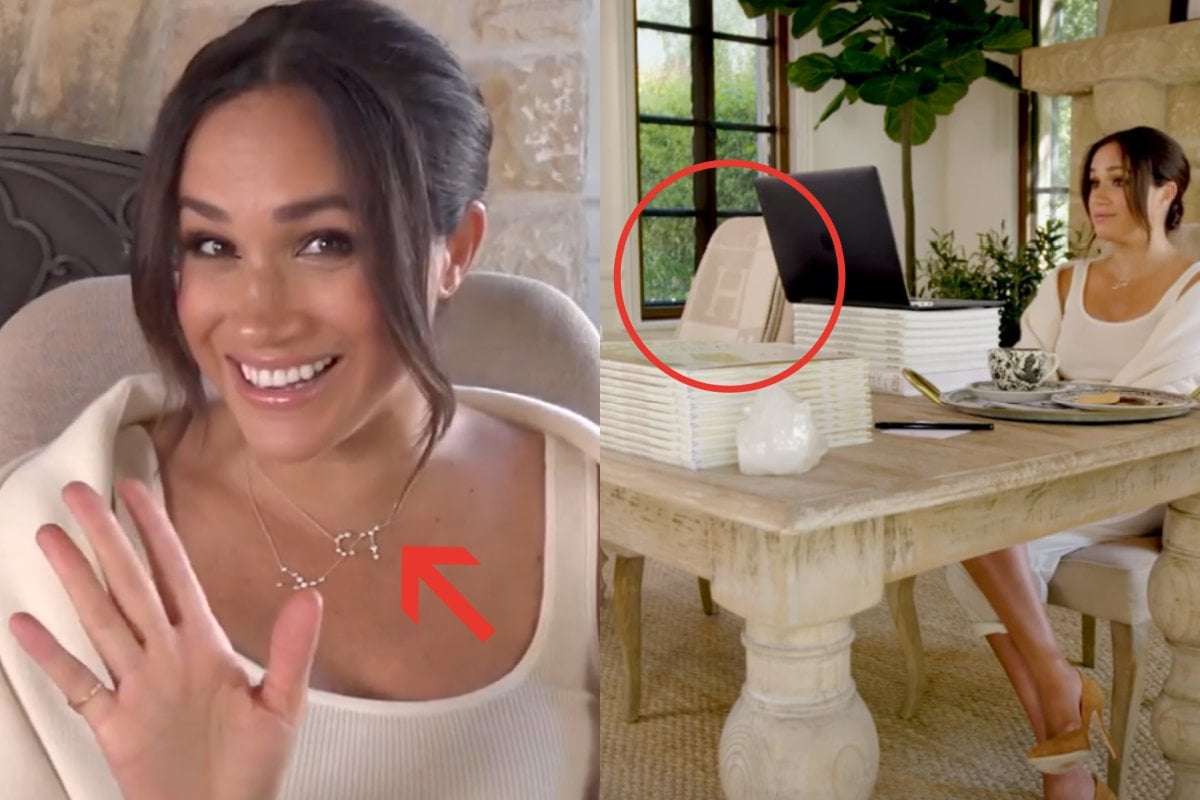 In case you missed it, Meghan Markle turned 40 yesterday.

To celebrate her milestone birthday, the Duchess of Sussex teamed up with Melissa McCarthy, among others, to launch her new initiative, 40x40.

"For my birthday, I have asked 40 friends, activists, athletes, artists, and world leaders to help kickoff a global effort by contributing 40 MINUTES OF MENTORSHIP to support women re-entering the workforce," she wrote on the Archewell website.

Watch: Meghan and Harry through the years. Post continues after video.

During the hilarious two-minute video with McCarthy to launch the campaign, there were a bunch of hidden details about Markle, her kids - two-year-old Archie, and two-month-old Lilibet - and her new life with Prince Harry in California (including a cheeky cameo from the man himself).

While we're wholeheartedly here for the message of the clip, here are eight things you might've missed that were going on in the background.

The first thing we spotted were two necklaces around Meghan Markle's neck that included a subtle (and very expensive) nod to both her children. 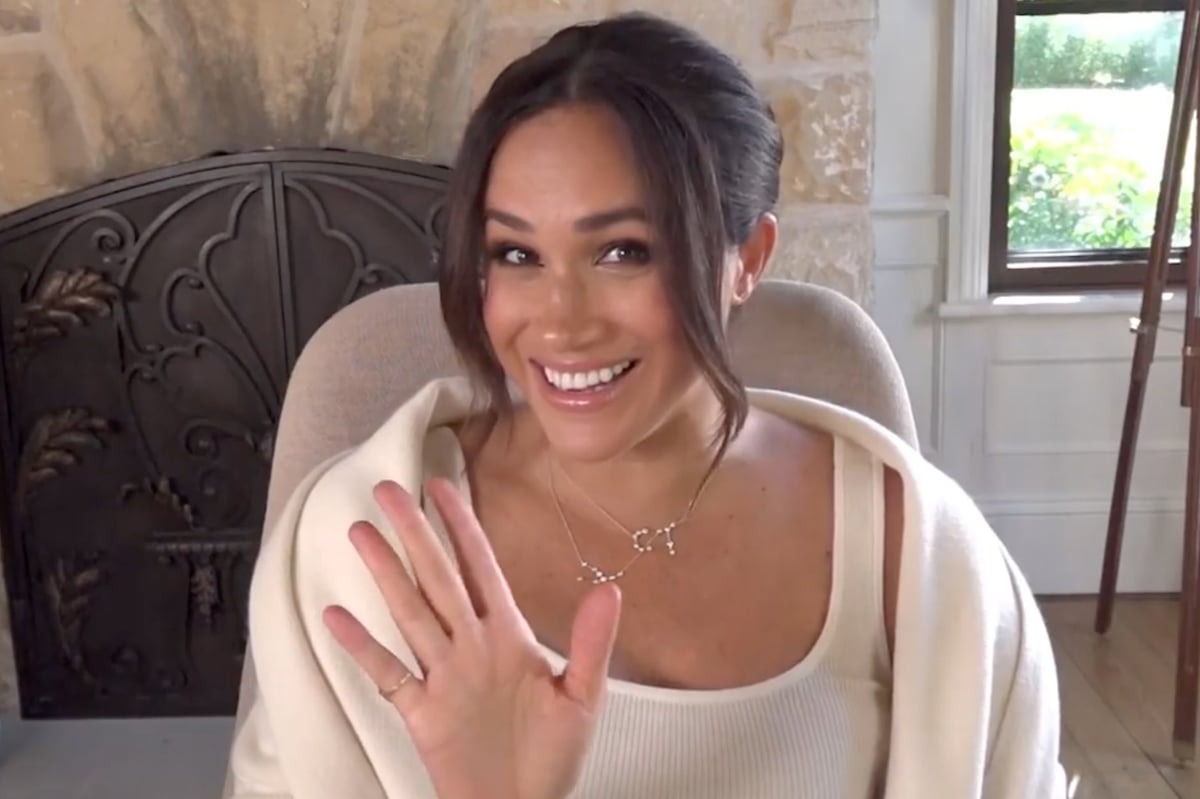 The LA jeweler is known for using recycled gold and ethically sourced gemstones in her work, so it makes sense those were the pieces sustainably-minded Markle chose.

Quick! Have a listen to this episode of The Spill, where hosts Laura and Kee discuss detail Meghan Markle really wanted you to see. Post continues after podcast.

In a blink-and-you'll-miss-it shot, you can glimpse never-before-seen family photos on Markle's desk.

The video shows one large photo of the couple's son, Archie, and three smaller black and white photos. The centre photo features Harry kissing Lilibet, another is a family shot, while the third snap shows Meghan snuggling up to Archie. 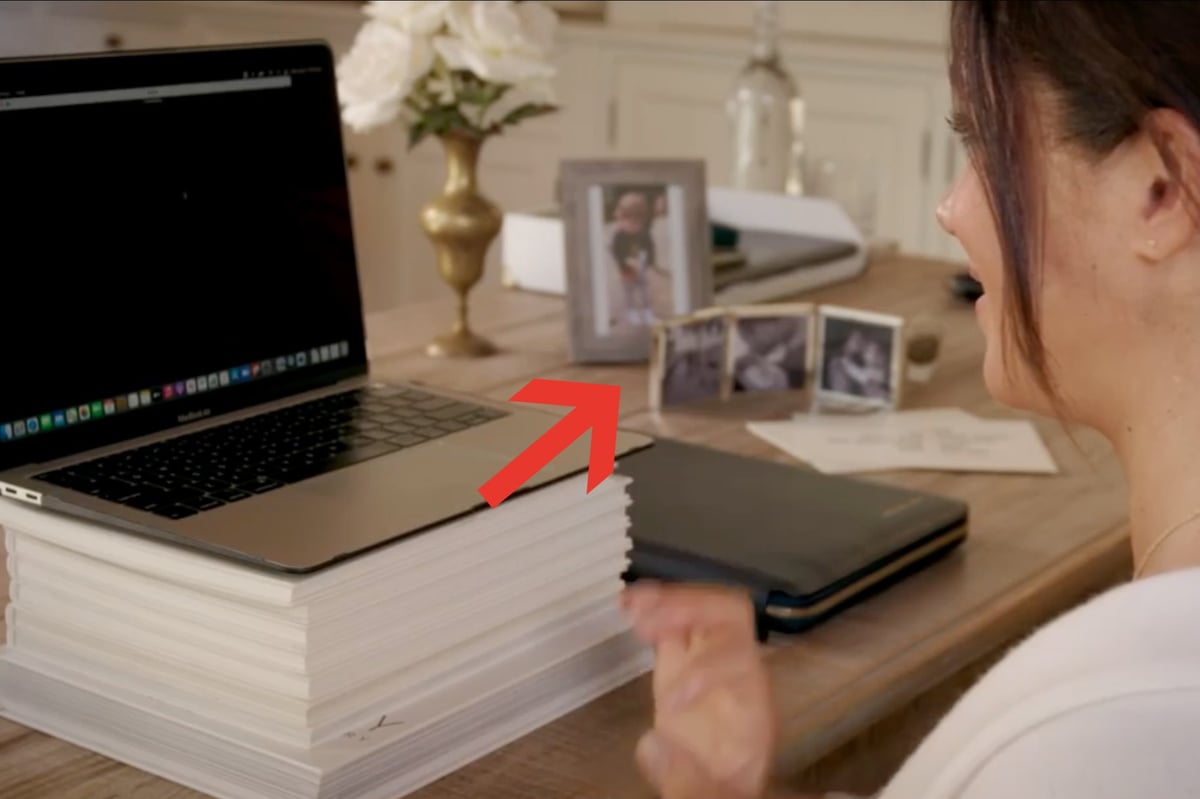 Now, let's talk about the elephant in the room: Meghan Markle's home office is very LA. The room, in their $15 million Montecito mansion, features lots of white, beige and gold.

You'll notice a jute rug, sandstone fireplace and a large (probably very expensive) wooden desk. But it doesn't look like the Duchess is really all that prepared for working from home. Where are her power cords? 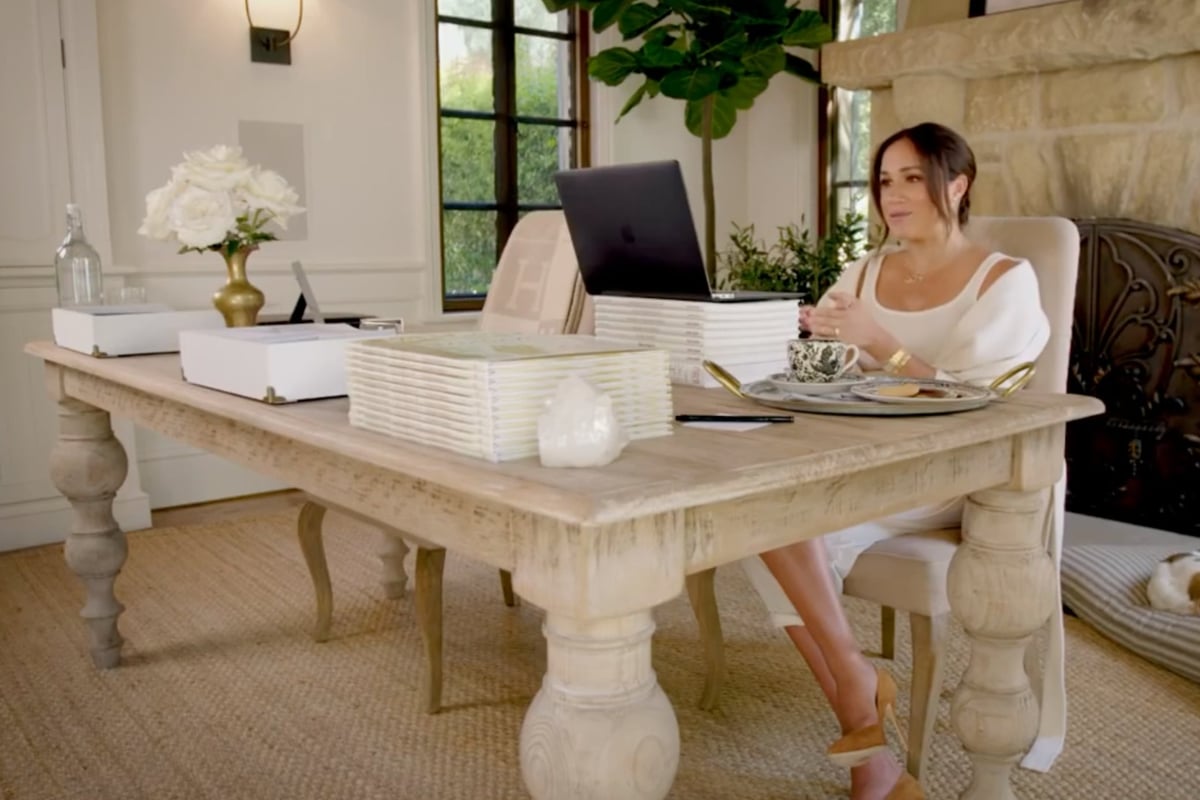 Atop her sprawling desk, you'll see the family photos, a water jug (because hydration, obvs), white flowers, tea and biscuits (lol), and a giant stack of copies of her kids’ book The Bench propping up her MacBook.

On the chair next to Meghan is a blanket. A very boujee Hermès blanket, which costs a cool $2,270. 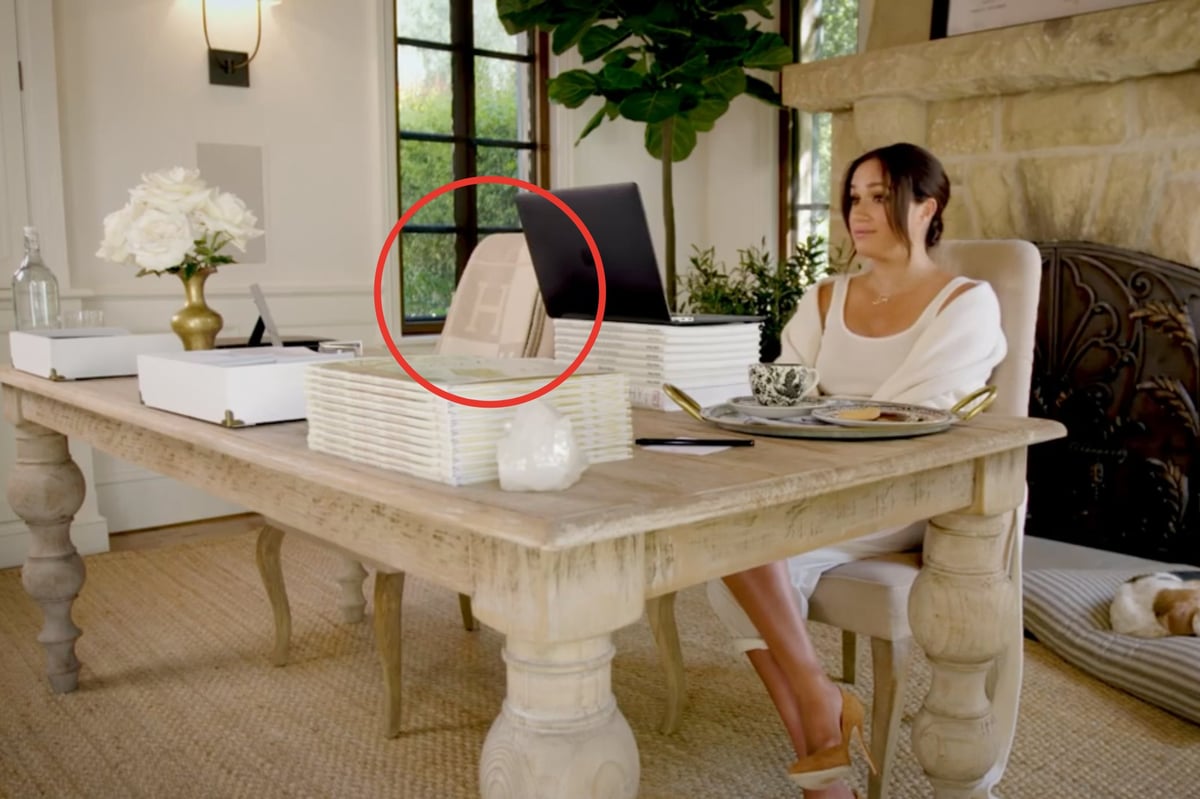 And in the front left corner of the desk is a large white "master healer" crystal. 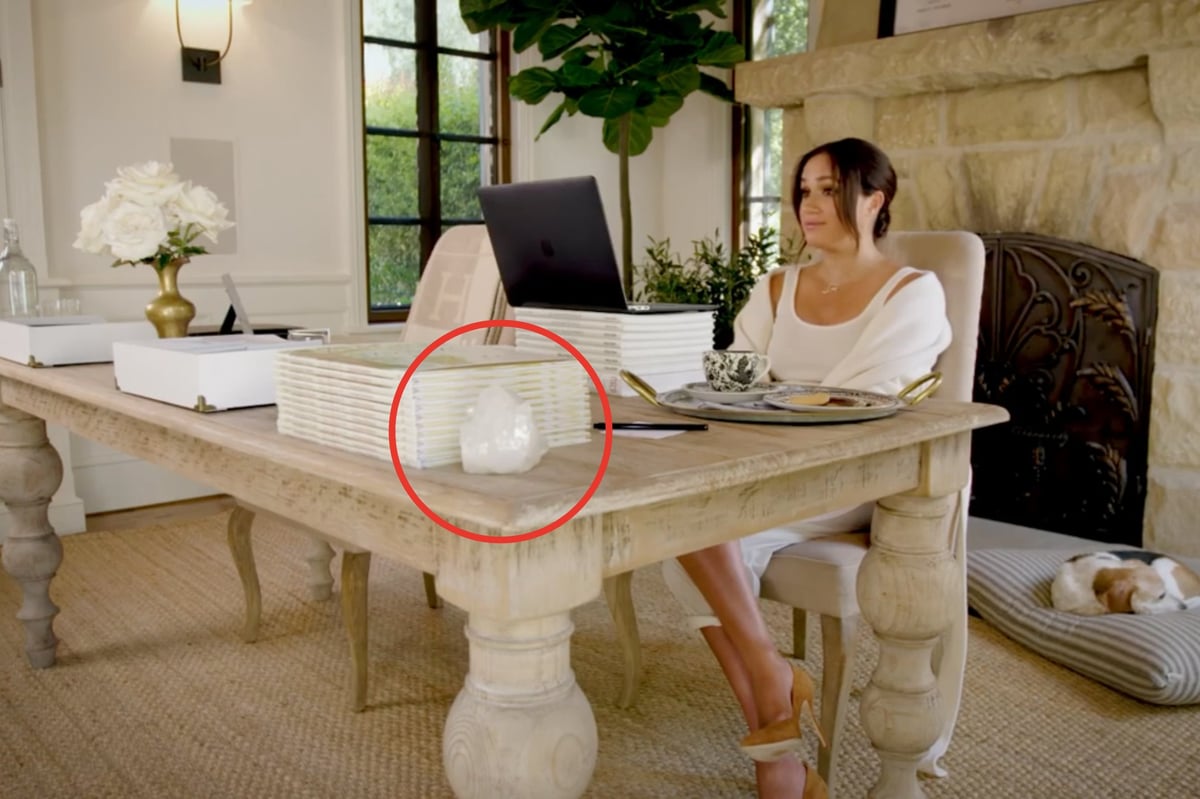 According to Healthline: "It’s said to amplify energy by absorbing, storing, releasing, and regulating it. It’s also said to aid concentration and memory. Physically, clear crystals are claimed to help stimulate the immune system and balance out your entire body."

A not-so-hidden detail was sitting behind Markle on a blue and white striped bed: her beloved beagle, Guy.

Guy was a very good boy during filming of the video, which is not an experience everyone has had with their dogs during WFH. But we digress. 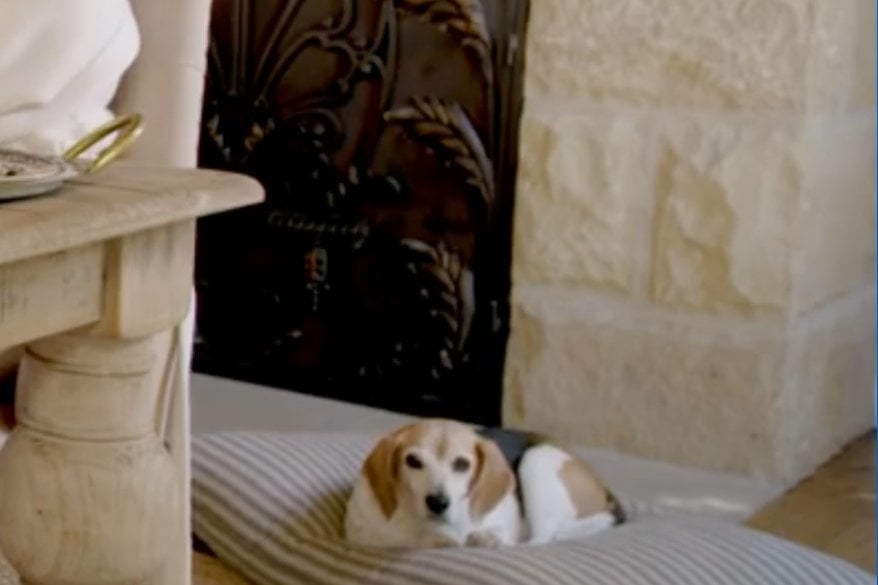 She paired a ribbed dress with a jumper thrown over her shoulders and added her signature pointed heels in a camel colour to complete the look.

And honestly, all we can think about is how dirty it would get with two kids under three. 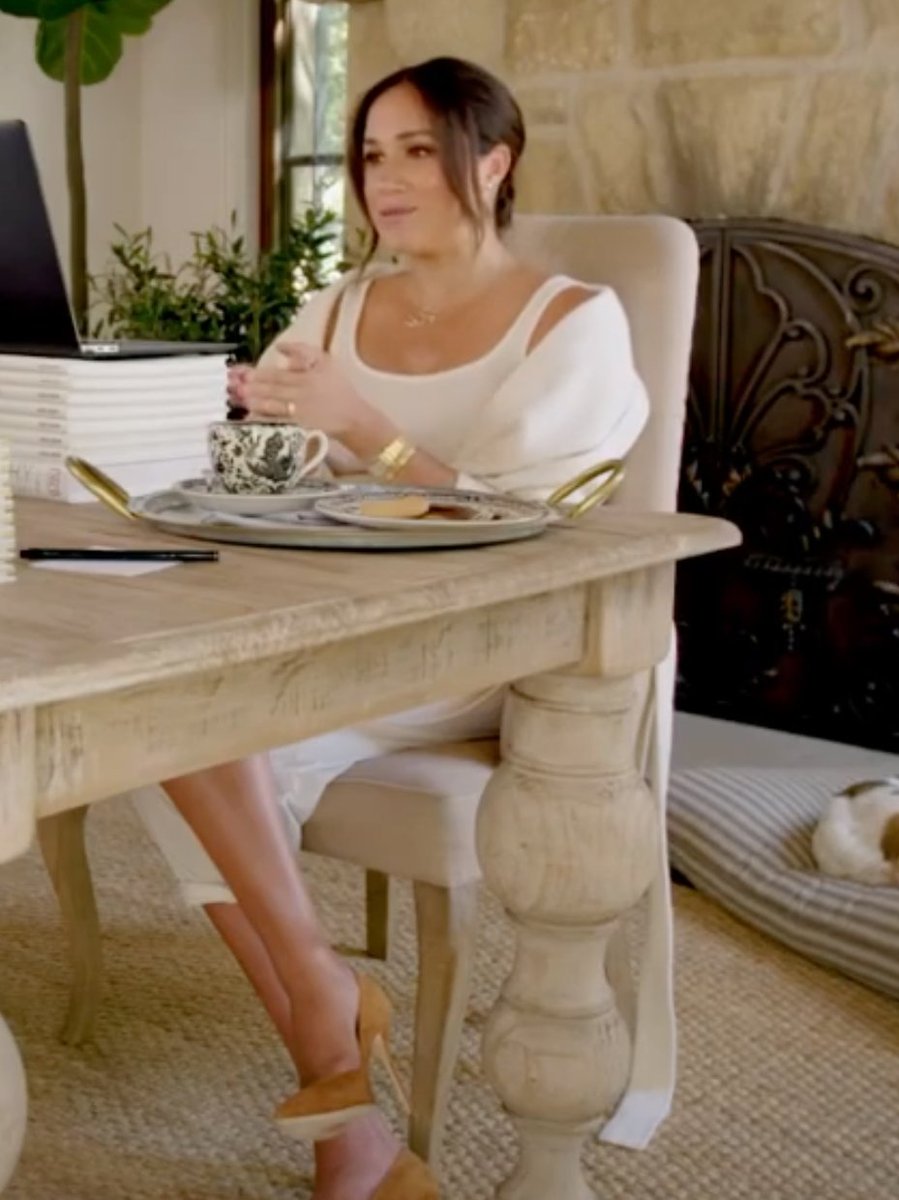 Lastly, the best part: during some out-takes at the end of the video, you can spot Prince Harry outside the window. And no, he's not just standing there! He's juggling. In sunglasses. 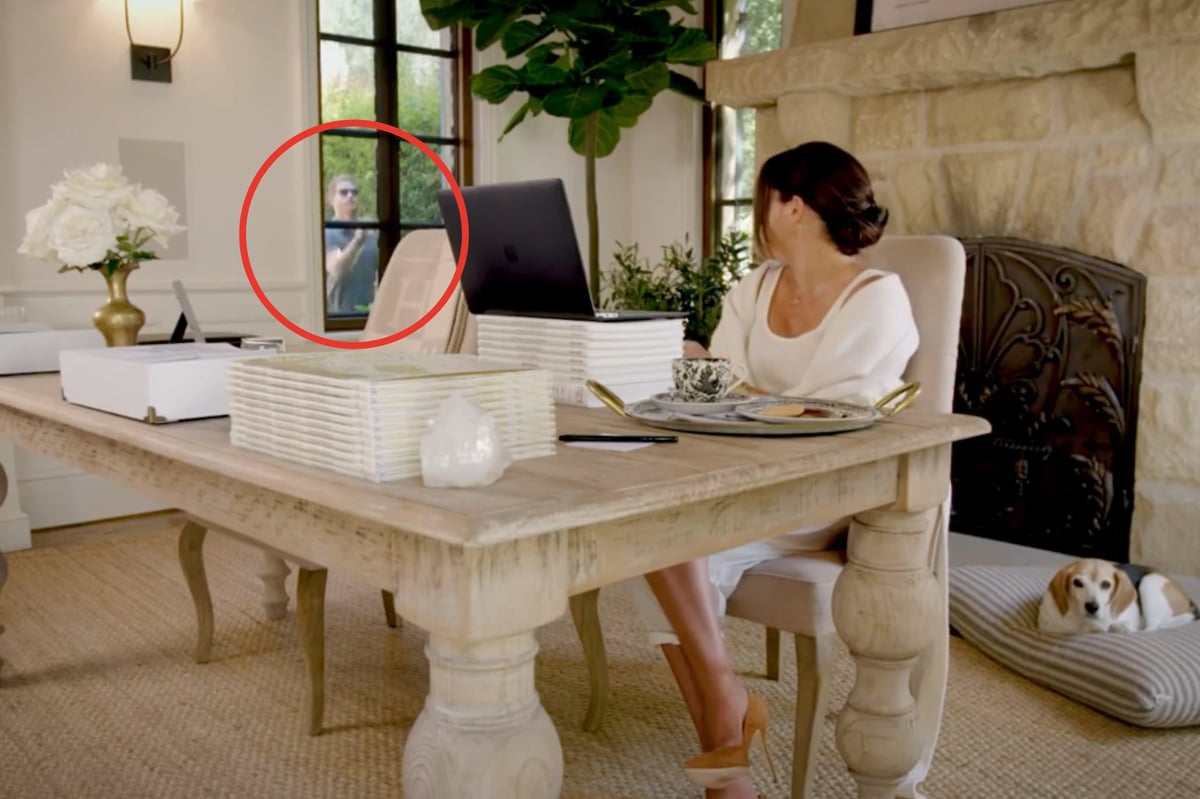 You can watch the full two-minute video with Meghan Markle and Melissa McCarthy here.

Reply
Upvote
1 upvotes
How does her 40 X 40 work?
I'm wondering how much help a celebrity can give your average mum looking to get back into the workforce and a bit more info on this would be ideal.