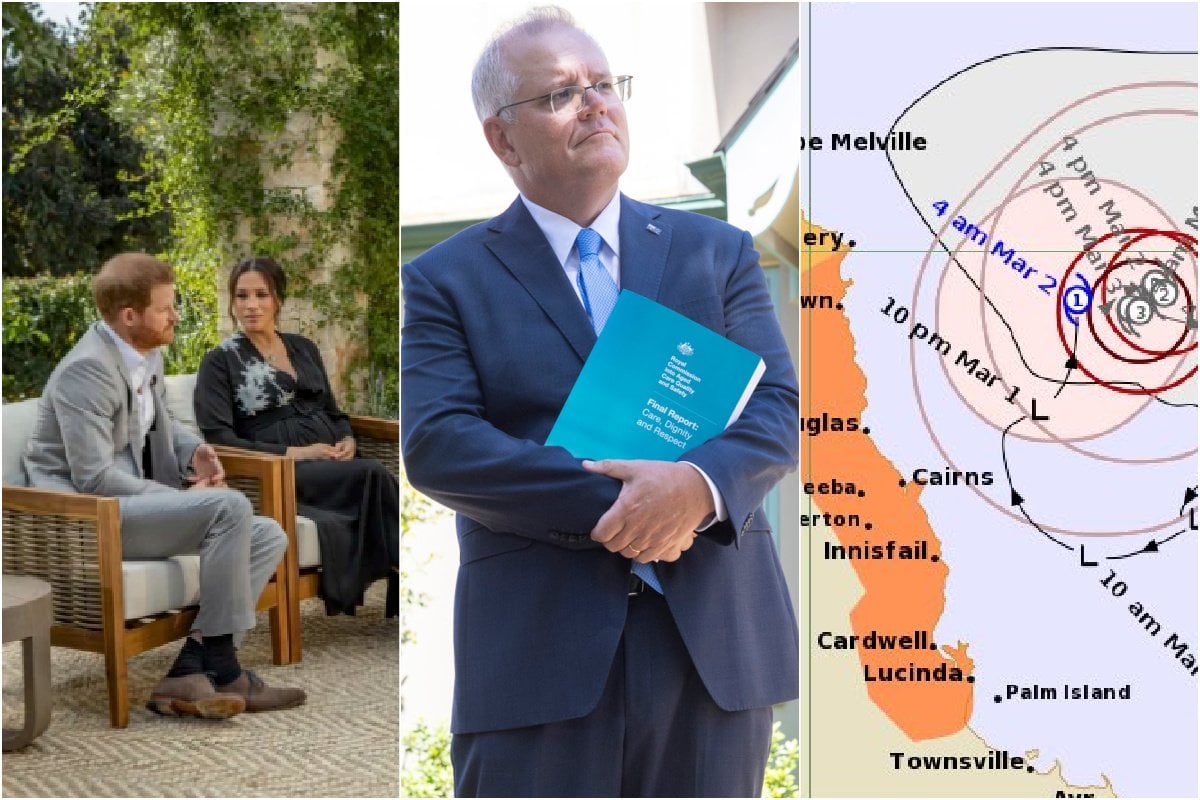 Prince Harry and Meghan tell Oprah it's been "unbelievably tough for the two of us."

Prince Harry says the process of separating from royal life has been very difficult for him and his wife, Meghan.

In an interview with Oprah Winfrey, Harry talked about how his late mother, Princess Diana, had to find her way alone after she and Prince Charles divorced.

"I'm just really relieved and happy to be sitting here talking to you with my wife by my side, because I can't begin to imagine what it must have been like for her going through this process by herself all those years ago," Harry said, adding, "because it's been unbelievably tough for the two of us."

CBS Presents Oprah with Meghan and Harry: A Primetime Special in one week. #OprahMeghanHarry pic.twitter.com/WCyoHDMCaP

"But at least we have each other," Harry said, in a clip from the interview special, which is scheduled to air on March 7 on CBS and the following day in Australia.

The couple lives in Montecito, California, where they are neighbours of Winfrey.

The brief promotional clip was one of two of that aired Sunday during CBS' news magazine "60 Minutes." Winfrey's questions and comment were predominant in the other clip, including her statement that, "You said some pretty shocking things here," without an indication of what she was referring to.

Harry and Meghan stepped away from full-time royal life in March 2020, unhappy at media scrutiny and the strictures of their roles. They cited what they described as the intrusions and racist attitudes of the British media toward the duchess, who is African American.

New aged care laws and extra audits to check on safety and quality at facilities are among the federal government's first responses to a royal commission into the sector.

The government has announced an initial $452 million to bolster the sector, with more funding flagged in the May federal budget.

The royal commission has made 148 recommendations to the Morrison government, including new laws to protect the rights of elderly people and increased regulator powers.

Prime Minister Scott Morrison says the values, rights and needs of older Australians need to be at the centre of aged care.

He said the findings provided the government with a once-in-a-generation opportunity to overhaul the system.

"It will test my government, the budget and test the parliament," he told reporters in Sydney on Monday.

"It will test the way in which we are prepared to deal with this issue."

$32 million will go to the Aged Care Quality and Safety Commission and more regulation on the use of restraints in care.

$190 million will go to residential care providers and $90 million to create a fund to help facilities facing financial challenges.

An emergency alert has been issued for Palm Island amid warnings a cyclone is likely to form off the north Queensland coast, bringing strong winds, heavy rain and abnormally high tides.

A tropical cyclone watch is in place between Cape Flattery and Lucinda, extending to Mareeba and Atherton.

An emergency alert has been issued for Palm Island residents, with gale force winds and heavy rain affecting the area.

The Bureau of Meteorology says a tropical low is forming along the monsoon trough 200km east of Innisfail and is expected to intensify into a tropical cyclone by Tuesday morning.

Currently 235km ENE of Cairns. @BOM_Qld says it became a Category 1 system just after 5AM.

The system is expected to remain off the coast before tracking southeast later in the week.

New remains in Caddick search, as detectives return to Sydney.

New remains have been located at three separate NSW south coast beaches in the search for Sydney conwoman Melissa Caddick, with remains at a fourth location confirmed to come from an animal.

Five days after Ms Caddick's decaying foot washed up south of Tathra on February 21, members of the public on Friday evening discovered a chunk of stomach flesh at Mollymook and called police.

Additional discoveries of remains were found at Cunjurong Point on Saturday afternoon and Warrain Beach at Culburra on Sunday morning.

There have been remains found at THREE beaches on the south coast, including at Mollymook and Culburra but police waiting on results. Sadly there is a possibility they belong to Melissa Caddick but also to a snorkeller who went missing near Batemans Bay in January https://t.co/18NRBw1ijO

Police said on Monday evening they would now forensically examine the findings to determine if they belonged to Ms Caddick.

However remains found by members of the public at Tura Beach on Saturday evening have been confirmed to come from an animal.

Liquidators say the financial fraudster "meticulously and systematically" deceived those who entrusted millions of investment dollars to her over seven years, then used the money to fund her lavish lifestyle.

The focus of the search operation in the Melissa Caddick investigation is now set to return to Dover Heights, where she was last sighted.

The UK has appealed for a mystery individual infected with a highly transmissible Brazilian variant of the novel coronavirus to come forward, more than two weeks after they tested positive but failed to give proper contact details.

UK authorities said six cases had been detected of the "P.1" variant identified in the Brazilian city of Manaus, against which current vaccines appear to be less effective.

Two were in South Gloucestershire in England and three in Scotland.

The Covid-19 variant that originated in Brazil is around twice as transmissible as some other strains and is more likely to evade the natural immunity people usually develop from prior infection, according to a new international study https://t.co/G7v7X52t4E pic.twitter.com/1Qny0DQYpn

But a sixth individual in England, one of more than a million people tested on February 12-13, had yet to be identified.

The P.1 variant shares significant mutations with a variant first detected in South Africa known as B.1.351, which has raised similar concerns.

Prime Minister Boris Johnson told broadcasters: "We don't have any reason at the present time to think that our vaccines are ineffective against these new variants of all types."

By Sunday, more than 20 million people in the UK had been given a first dose of COVID-19 vaccine - about 30 per cent of the population - while about 800,000 had had a second dose.

The neo-Nazi posted disturbing footage of the incident online, hours before the broadcaster ran a story about the extremist group he was a member of.

A second man can be seen in the video directing a racial slur at the security guard, who is black.

Victoria Police has been given CCTV vision of the attack and the Channel Nine security guard was taken to hospital by ambulance.

The nation's stocks of blood and plasma are running critically low as hospitals tackle a pandemic-driven backlog and a decline in donors.

Australian Red Cross Lifeblood on Tuesday issued an urgent plea for an extra 22,000 donors in the next two weeks.

All blood and plasma types are needed, but in particular O-, A-, A+ and B- blood types as these stocks are all running low.

Lifeblood Executive Director Cath Stone said there were fewer donors as well as an increase in elective surgery as hospitals deal with the backlog after thousands of operations were deferred during last year's coronavirus lockdowns.

- Prince Philip has been transferred to another hospital after spending nearly two weeks in a private ward recovering from an infection.

- Forensic car accident experts believe golfer Tiger Woods may have fallen asleep behind the wheel before crashing his luxury SUV in LA, leaving him seriously injured.

- China is increasingly cracking down on the work of foreign journalists according to a survey of reporters in the country.