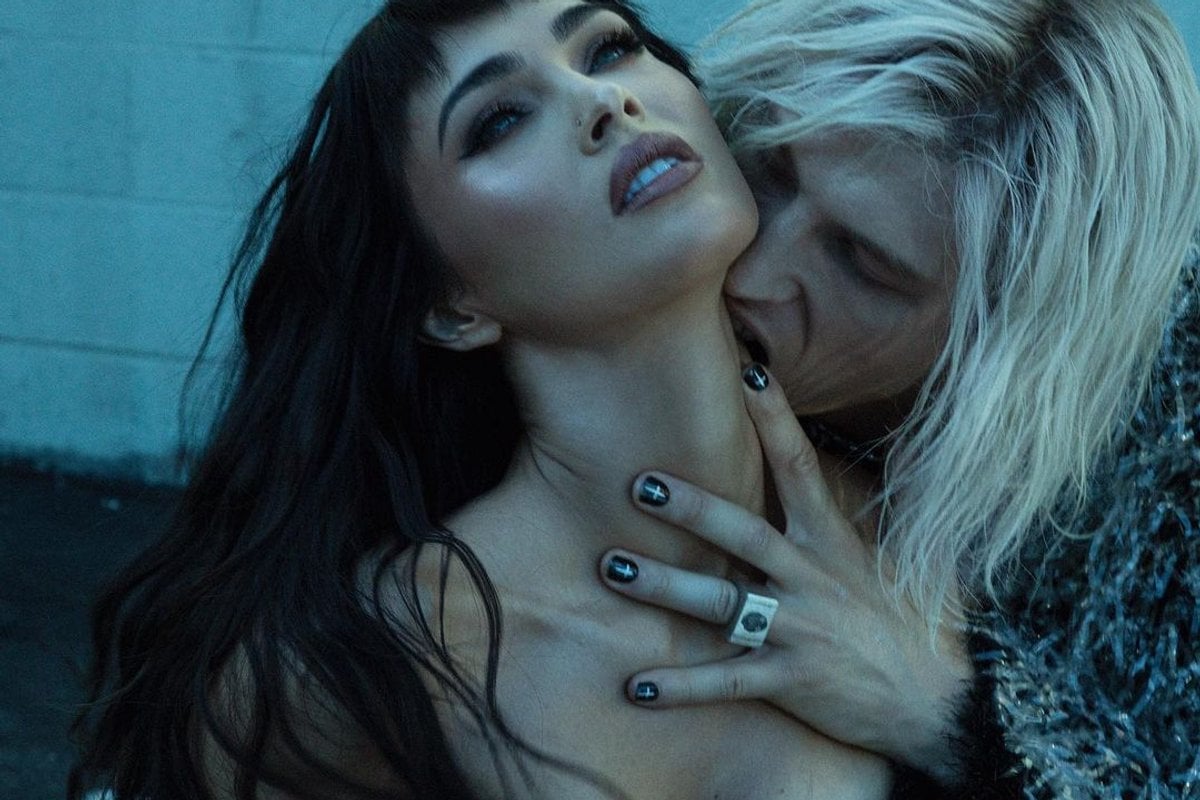 I had a bit of a revelation earlier today.

I was a few sentences into GQ's Autumn/Winter celebrity profile: 'True romance: Megan Fox and Machine Gun Kelly are Hollywood’s hottest new power couple.' when it hit me.

The reason we're all so obsessed with celebrities is because they're... not normal people.

I mean, look at their pregnancy reveals. Post continues after video.

And sure, that rule doesn't apply to absolutely everyone, but (and I'm not joking when I say this) literally one sentence into GQ's interview with the pair, I was reading about how Megan Fox and her boyfriend, Machine Gun Kelly were giving each other matching tattoos that read "the darkest fairytale" as a reference to one of the first text messages they ever sent each other.

And in what world is the phrase "the darkest fairytale" among the first things you say to a stranger you're looking to bonk? In Hollywood, apparently.

In case you missed it, actress Megan Fox and singer/songwriter Machine Gun Kelly are a particularly popular celebrity couple for the sheer fact that they're both ridiculously good looking.

They also share four children between them (three from Megan's previous relationship and one from Machine Gun Kelly's), but enough on that, because this week, they sat down for a very glam interview with GQ writer, Molly Lambert, and it. Was. A. Ride.

Here are the five wild things we took away from the interview.

1. The first time they met didn't count because they "didn't see each other's faces".

Megan Fox and Machine Gun Kelly first met at a party sometime in the 2010s.

They don't count it though, because neither of them really remember it despite having a conversation (and you guys sure you weren't just suuuuuuper high?)

"We didn’t see each other," Megan tells Molly, turning to MGK: "Do you remember [seeing] my face?"

"I don’t remember your face... And I definitely would have remembered his face," she continued.

"I just remember this tall, blonde, ghostly creature and I looked up and I was like, 'You smell like weed.' He looked down at me and he was like, 'I am weed.' Then, I swear to God, he disappeared like a ninja in a smoke bomb."

As if that whole interaction wasn't weird enough, Megan then explained that she believed there was some sort of higher power at play that prevented them from seeing each other.

"I think we weren’t allowed to see each other yet. We weren’t supposed to run into each other that night, so our souls, our spirit guides, were luring us away from each other, because you literally had no face, like that thing from Spirited Away. It is hard to see his face in general, but really he had no face that night.

"Thank God, [because] what torture had I known you were there [she addressed Kelly] and I couldn’t get to you. It was better that I didn’t know."

2. Their first 'real' meeting was on set of Midnight in the Switchgrass.

The pair then reunited years later when they started filming together on Midnight in the Switchgrass where MGK's character's first line of dialogue to Megan was, and I quote: "f**ked up."

After filming that day, he texted Megan a couple of text messages, one reading "I am weed," and the other repeating his "filthy" line of dialogue, seemingly poking fun at their first two encounters.

"I just responded like, 'How every fairytale begins,' Megan said. "To which he ended the conversation with, ‘All the good ones at least...’"

"Did you ever talk to a girl for three hours on the phone in your whole life?" Megan asked MGK, explaining that the pair's texts turned into a phone call. "Were you like, 'How the f**k am I going to talk to her?'"

"Even our first kiss, she wouldn’t kiss me. We just put our lips right in front of each other and breathed each other’s breath and then she just left," he told the interviewer, and I'm not sure if that's meant to be romantic or...

Yeah. Not for me. Image: Giphy.

3. The couple's first date may as well have been straight out of a movie.

Sticking with the theme of 'crazy couple s**t that doesn't happen to everyday people,' the pair went on to discuss their first date which consisted of MGK picking Megan up in a 1974 cadillac convertible and driving to a canyon's edge to listen to Ella Fitzgerald and picnic on a "bed of roses".

But that's not all. Afterward they went to the roof of the Roxy Theatre on Sunset Boulevard, "played pop punk and made out".

4. Their relationship is "ecstasy and agony".

If you hadn't picked it already, their relationship is deep. Like, really deep.

"This is a very intense relationship," Megan said.

"Our souls chose this to absolutely have to face our shadow selves; to face things about ourselves we didn’t want to have to know, that we tried to push away."

"It’s almost like she reconnected a wire in my brain. Creativity won’t stop coming out," MGK added.

"It’s ecstasy and agony for sure... I don’t want people to think anything’s perfect with us. I didn’t say it was the darkest fairytale for no reason. God help you if you would’ve met us last Saturday."

5. Oh, and they took mushrooms in Bora Bora.

To neatly wrap it up, tacked on the end of the piece is a sweet little anecdote where the pair explain how hanging out together "always leads to unexpected places".

Like that time they went to Bora Bora, took mushrooms and climbed a mountain in search of a "sacred banyan tree".

They found it, of course, and I think that just about sums up Megan Fox and Machine Gun Kelly who, despite all the love shared between them, says he's "still a motherf**king outlaw."

And yes, that quote is my bet for their next matching tattoos.

Reply
Upvote
2 upvotes
They've changed the commenting platform here, so you're all just going to have to imagine the "Liz Lemon eyeroll" gif I so badly want to use right now.
M
mamamia-user-482898552 3 months ago

Reply
Upvote
@rush But don't you understand... they're both so *edgy*!

Reply
Upvote
1 upvotes
@mamamia-user-482898552 yes, I'm sure all the fourteen year olds going through their emo phase think they're super cool right now!
Also, did any other fans of Big Girls Blouse see these two and instantly think of the "Juliette Lewis Syndrome" sketch?
M
mamamia-user-482898552 3 months ago

Reply
Upvote
@rush They're both a bit long in the tooth to be of interest to 14 year olds, methinks...!