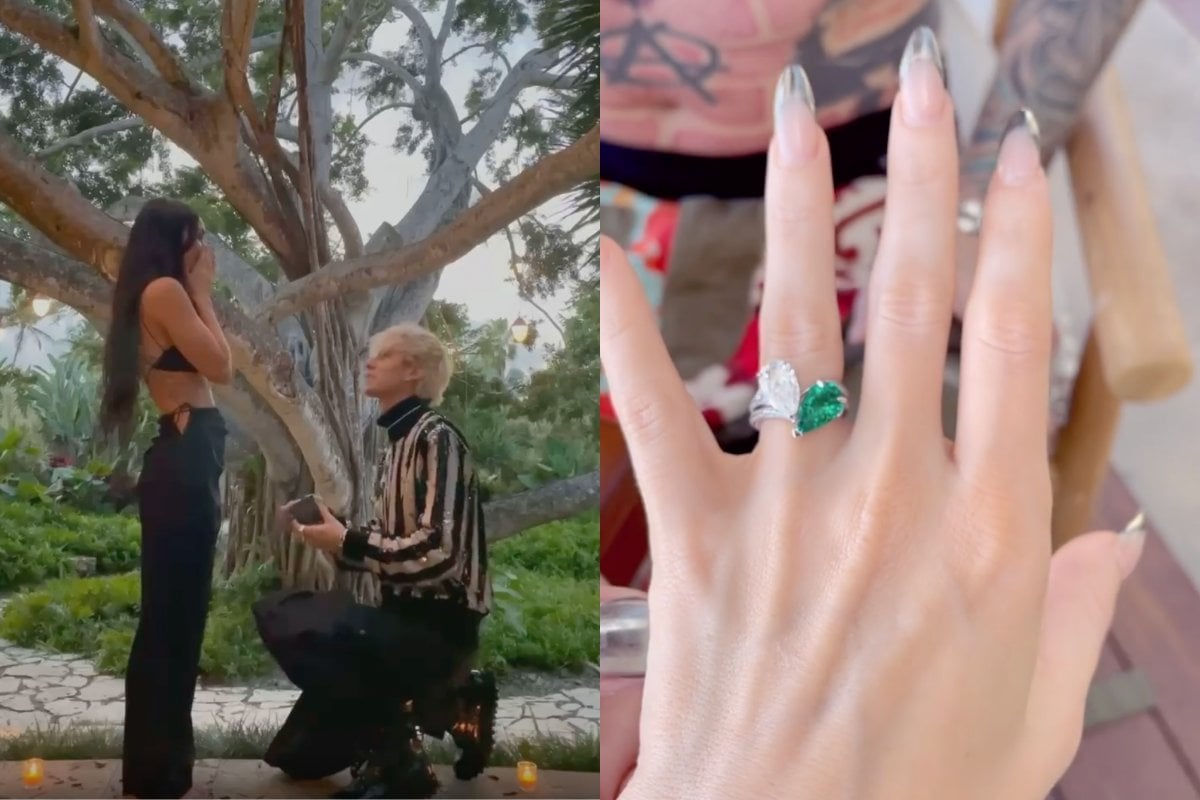 Machine Gun Kelly and Megan Fox are officially engaged after a year and a half of dating, and they sealed their union earlier today by drinking each other's blood. Apparently.

Announcing their engagement news on Instagram on Thursday morning, Fox wrote: "In July 2020, we sat under this banyan tree. We asked for magic. We were oblivious to the pain we would face together in such a short, frenetic period of time.

"Unaware of the work and sacrifices the relationship would require from us but intoxicated off of the love. And the karma," she continued.

"Somehow, a year and a half later, having walked through hell together, and having laughed more than I ever imagined possible, he asked me to marry him.

In MGK's post, the singer explained the meaning behind the unique ring he selected for Fox.

"I know tradition is one ring, but I designed [Fox's ring] with Stephen Webster to be two: the emerald (her birth stone) and the diamond (my birth stone) set on two magnetic bands of thorns that draw together as two halves of the same soul forming the obscure heart that is our love," he said.

Their engagement was about as artistic and poetic as their relationship has been so far.

And that's why we decided to take a look back at some highlights of the ridiculously good-looking couple's time together until now.

The first time they met that 'didn't count'.

Megan Fox and Machine Gun Kelly first met at a party some time in the 2010s.

They don't count it though, because neither of them really remember it, which sounds like an extremely intoxicated night, but of course it's not, because as they describe it, it was due to a higher power at play.

"We didn’t see each other," Fox said in an interview with GQ, turning to MGK: "Do you remember [seeing] my face?"

"I don’t remember your face... and I definitely would have remembered his face," she continued.

"I just remember this tall, blonde, ghostly creature and I looked up, and I was like, 'You smell like weed.' He looked down at me and he was like, 'I am weed.' Then, I swear to God, he disappeared like a ninja in a smoke bomb."

As if that whole interaction wasn't weird enough, Fox then explained that she believed there was some sort of higher power at play that prevented them from seeing each other.

"I think we weren’t allowed to see each other yet. We weren’t supposed to run into each other that night, so our souls, our spirit guides, were luring us away from each other, because you literally had no face, like that thing from Spirited Away. It is hard to see his face in general, but really he had no face that night.

"Thank God, [because] what torture had I known you were there [she addressed Kelly] and I couldn’t get to you. It was better that I didn’t know."

The second time they met was on the set of Midnight in the Switchgrass.

The pair then reunited years later when they started filming together on Midnight in the Switchgrass where MGK's character's first line of dialogue to Fox was, as he calls it, "f**ked up."

After filming had wrapped up for the day, MGK texted Fox a couple of messages, one reading "I am weed," and the other repeating his "filthy" line of dialogue, poking fun at their first two encounters.

"I just responded like, 'How every fairytale begins,'" Fox said. "To which he ended the conversation with, 'All the good ones at least.'"

"Did you ever talk to a girl for three hours on the phone in your whole life?" Fox asked MGK, explaining that the pair's texts turned into a phone call. "Were you like, 'How the f**k am I going to talk to her?'"

When the pair next saw each other, according to MGK, Fox "wouldn't kiss him".

"Even our first kiss, she wouldn’t kiss me. We just put our lips right in front of each other and breathed each other’s breath and then she just left," he said.

The couple's first date may as well have been straight out of a movie.

... And we'd expect nothing less from them.

In that same GQ interview, the pair recounted their first date which consisted of MGK picking Fox up in a 1974 cadillac convertible and driving to a canyon's edge to listen to Ella Fitzgerald and picnic on a "bed of roses".

But that's not all. Afterwards, they went to the roof of the Roxy Theatre on Sunset Boulevard, "played pop punk and made out".

You can't make this sh*t up.

Their relationship is "ecstasy and agony".

If you hadn't picked it already, their relationship is deep. Like, really deep.

"This is a very intense relationship," Fox said in the GQ interview.

"Our souls chose this to absolutely have to face our shadow selves; to face things about ourselves we didn’t want to have to know, that we tried to push away."

"It’s almost like she reconnected a wire in my brain. Creativity won’t stop coming out," MGK added.

"It’s ecstasy and agony for sure... I don’t want people to think anything’s perfect with us. I didn’t say it was the darkest fairytale for no reason. God help you if you would’ve met us last Saturday."

While the couple are yet to share children together, Megan Fox has three kids from her previous marriage to actor Brian Austin Green, and MGK has one daughter, Casie Colson Baker, from his relationship with Emma Cannon.

We're very excited to see what's next for the very strange, but very happy couple.