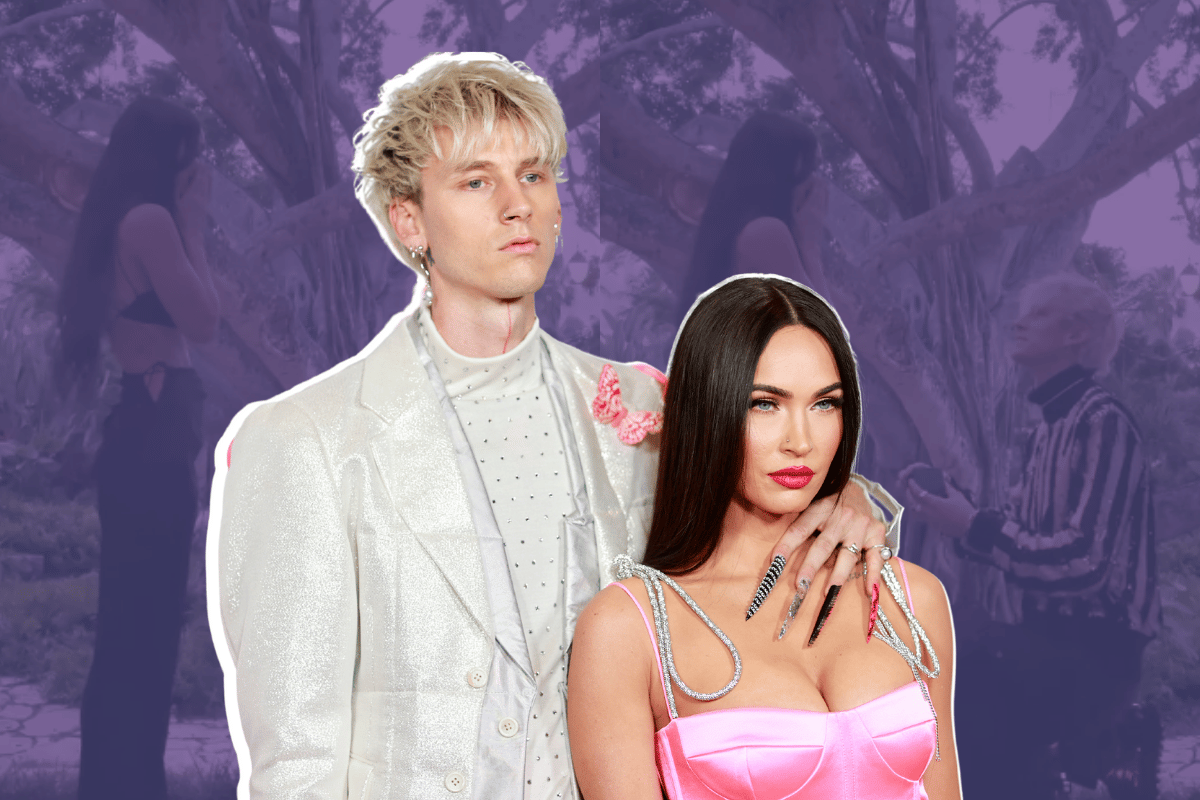 Unless you live under a rock, you will have likely seen Machine Gun Kelly and Megan Fox's engagement announcement.

He was oddly dressed like a Foot Locker employee, and she looked over the moon and gorgeous.

It was the climax to their love story that has been dominating headlines for months. Except I didn’t feel happy for them.

I just felt a bit weird about it - you know like when your friend gets engaged to that guy that doesn’t let her have male friends anymore.

Watch: The celebrity couples we completely forgot about. Post continues below.

I’ll be honest, recently MGK and Megan's relationship feels less like a love story and more like a very public example of an unhealthy relationship.

Yet it has been projected to the world as aspirational #relationshipgoals. Which as far as I’m concerned, is pretty dangerous.

You only have to scroll through Instagram to see how viral this couple has become.

Personally, I love a dramatic celebrity love affair and I have a long history of being devoted to them. The more dramatic and silly the relationship, the better. Plus, extra points if they use the phrase 'eternal love'.

Who can forget Angelina Jolie wearing Billy Bob Thornton’s blood around her neck? Or Johnny Depp’s Winona Ryder tattoo? There’s something so absurd about celebrities being so publicly in love when their breakup rates are nothing short of astronomical, and I live for it.

So when we entered into our new era of over the top celebrity couples, I was keen. Let’s face it, we’ve had a couple of dry years. (I’m sorry, but even Kim and Kayne didn’t bring this level of drama.)

The new lineup of celebrity lovers included Travis Barker and Kourtney Kardashian and Machine Gun Kelly and Megan Fox, and I was living for it!

The more talk about soul mates and twin flames, the better. In my real life, I was struggling to get through a pandemic, so it was the distraction I needed.

But pretty quickly, I started to see a difference in Travis and Kourtney’s relationship vs MGK and Megan's relationship.

While both couples were heavy on public groping and talking about soulmates and finding never-ending happiness, MGK and Fox’s relationship began to be less about flaunting how in love they are, and more about how their relationship is 'complicated'.

Even in Fox’s engagement post, she implies a fairly complex relationship.

She wrote: "Unaware of the work and sacrifices the relationship would require from us but intoxicated off of the love. And the karma. Somehow a year and a half later, having walked through hell together, and having laughed more than I ever imagined possible, he asked me to marry him."

Next, Machine Gun Kelly revealed that he’d designed Megan’s wedding ring specifically so it would hurt to take it off.

In an interview with Vogue, he explained, "The concept is that the ring can come apart to make two rings. When it’s together, it’s held in place by a magnet. So you see how it snaps together? And then it forms an obscure heart. And you see this right here? The bands are actually thorns. So if she tries to take it off, it hurts." He then added, "Love is pain."

Couple this with the fact that Megan had given this very interesting quote about her relationship to Nylon, "Loving him is like being in love with a tsunami or a forest fire. The intensity of merging with him is just overwhelming, and the threat it poses is so powerful but so beautiful that you have no choice to surrender with reverence and with gratitude."

But here’s the thing, we can never really know what’s going on in someone else’s relationship and it’s pretty clear that Fox and MGK are courting public attention.

Talking about drinking each other’s blood doesn’t scream 'protect my privacy' and for all we know, in private, they have a very low-key and relaxed relationship.

They may even watch Netflix and order Uber Eats and argue about what the right way is to make a bed. (Seriously, its corners tucked in, right?)

But publicly, they are putting out an image that relationships should be complicated, and love should hurt. I’m sorry, but that is really dangerous.

I grew up during the peak of the Twilight saga. I realise, in retrospect, how damaging it was to be told a relationship where the man was obsessed with the woman was normal. Edward even used to watch Bella sleep, remember?

This was followed by a lot of confusing pop culture examples like Ryan and Marissa in The O.C., or Chuck and Blair in Gossip Girl, whose whole relationship was based on out scheming each other. In fact, Chuck literally traded Blair for a hotel.

I was constantly being told that love was about drama and sacrifice and betrayal and it was always complicated.

Listen: Hosts Laura Brodnik and Kee Reece chat about the red flag fans have noticed about Megan Fox and Machine Gun Kelly's relationship on The Spill. Post continues below.

True love meant that the man was always creepily obsessed with you, and it definitely hurt. I mean, how many times did Marissa cry over Ryan?

So, when I was young and dating, I thought obsession was perfectly normal. In fact, I thought it was a compliment.

Honestly, I was actively searching for someone to be as obsessed with me as Edward was with Bella. Not surprisingly, this kind of thinking led me into a relationship that ended in having to get an AVO against my ex-boyfriend.

Now, of course, this wasn’t my fault. But there were so many warnings signs that I mistook for love.

Pop culture encouraged me to mistake obsession for love. Constant calls and messages if I didn’t instantly reply, surely that just meant he loved and adored me? Or the fact that he always ended up screaming at me if we argued - that was just what normal couples did on television, surely this was passion? And jealousy? That just meant he cared.

It didn’t click to me that these could be signs of an unhealthy relationship. I thought it was normal, or maybe even romantic.

So yes, it would be easy to write off Megan Fox and Machine Gun Kelly’s presentation of their relationship as just another nutty pop culture episode that serves to entertain and amuse us. But they are also showcasing an example of love that is unhealthy to a bunch of young, impressionable people.

The last thing we need is two celebrities telling young people that love is meant to hurt, because love isn’t meant to hurt at all.

It is possible to have passion and romance without the pain. For me, love is less about thorned wedding rings and more about feeling encompassed in a really good cashmere blanket.

Love should feel warm and snuggly, with no sharp edges in sight.

Reply
Upvote
I'm a bit surprised that any adult sees TV and film as any kind of reflection of real life. Even as a kid I knew it was made up or exaggerated for the purpose of entertainment rather than to role model relationships. Celebrities are stuck in the middle of not having a normal life but also not living in a tv show, which makes their antics slightly less inexplicable.
The only show that I can think of that comes close to reality is Little Lunch.
C
cat 4 months ago