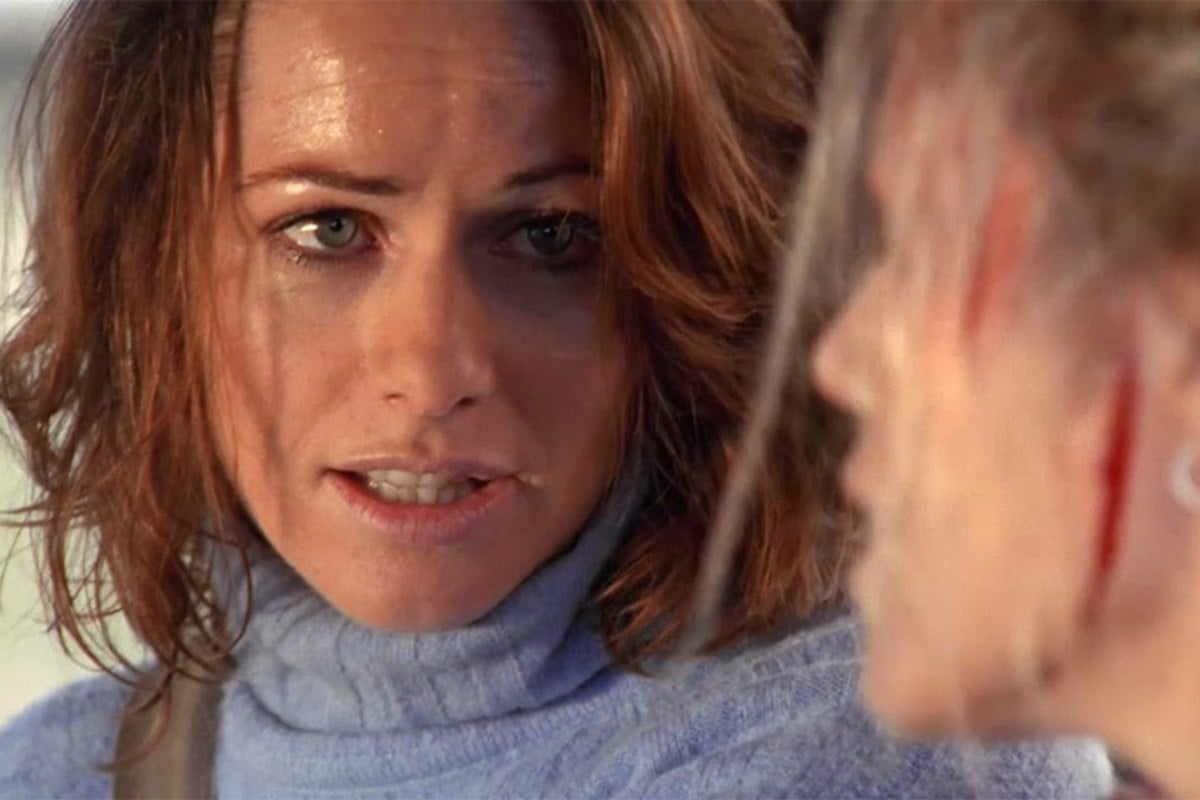 In a series of heart-wrenching moments in 2003, Australians were forced to watch Claire McLeod meet her untimely end  after she plunged off a cliff in beloved TV show McLeod’s Daughters.

There were recent whisperings that the show might be making a comeback, but they never eventuated into a full series return. It also definitely wouldn’t have been the same without seeing sisters Claire and Tess together.

Now, 15 years later Lisa Chappell, the actress who portrayed Claire, has told TV Week  as part of a series of interviews with the cast and creators, what it was like filming that pivotal scene.

After filming three seasons, Chappell decided to not renew her contract and leave the show. From the moment the cast and show creator, Posie Graeme-Evans, knew about her decision they had a very difficult and painful decision to make.

“I said, ‘Look, I’m not coming back – Claire would never leave the property, so we have to kill her off,'” said Chappell.

Sharing how they filmed Claire's final scene, the cast and crew said they recorded the shot in two separate lots.

One of Claire and Tess in the car (which was actually done in a paddock), with a separate shoot of the car falling off the cliff. Although Chappell wasn't in the car for the latter shot, she says watching the car tumble over was a "surreal and disturbing" experience.

"Watching the truck go over was very strange because they had a dummy in the same outfit as me with a wig on," she says.

"It looked horrifically like me. It was quite surreal and disturbing."

And for all the emotional trauma it caused viewers - this was a time before Game of Thrones had made killing off beloved characters the norm - it's nice to know the actresses behind our screens felt it too.

Do you remember that scene from McLeod's Daughters? Did it break your heart? Group Therapy is open in the comments.

We list our top TV parents we absolutely adored. Do you agree?

Reply
Upvote
I’ve been binging McLeods & LOVE it. When Claire died I was HORRIFIED & ANGRY. The dynamics of the characters is great, writing better with each episode. I’m recovering but it’s just not the same
mamamia-user-984223956 3 months ago

Reply
Upvote
I just watched McLeod Daughter and I fell in love with Claire and Alex   Their Chemistry was so believeable and hot.  I rewind and play their scenes over and over. The show lost it when they killed Claire off.  They should have paid her more and kept her for another season and let them marry and have a kid and then kill her off.  Didn’t like the red head lady .  She was a good actress but She didn’t compare to Claire. Wish there was another series with Aaron and Lisa.   Such good Chemistry.
News
General
Opinion
True Crime
Politics
Sport
Explainer
Entertainment
Celebrity
Reality TV
Movies
TV
Books
Rogue
Royal
Lifestyle
Beauty
Fashion
Weddings
Home
Wellness
Health
Fitness
Travel
Food
Parents
Before The Bump
Pregnancy
Baby
Kids
Teens
School
Parent Opinion
Work & Money
Money
Finance
Career
Lady Startup
Relationships
Sex
Dating
Separation
Friendship
Family
Real Life
Couples