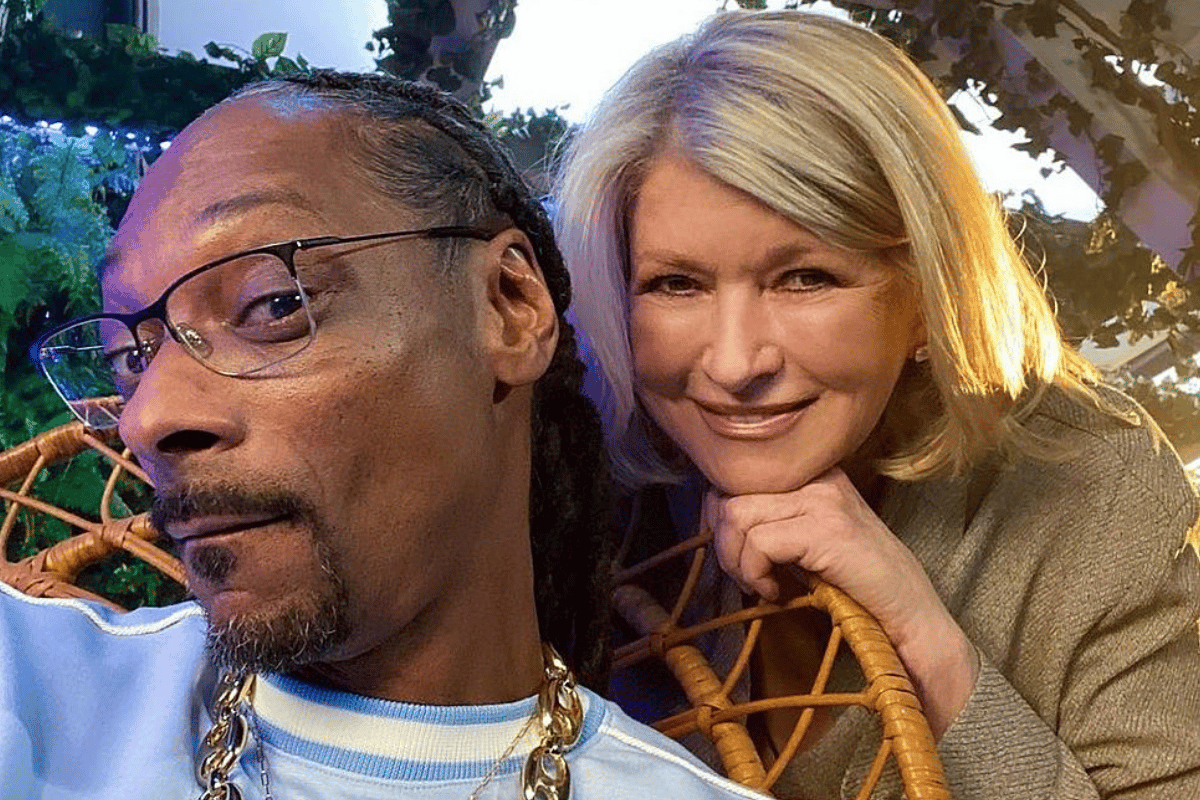 80-year-old Martha Stewart is a businesswoman, home cook and television personality that has created a food and lifestyle empire for herself. Her Instagram is full of idyllic recipes, gardening images and tips on how to host the perfect dinner party.

On the flip side, Snoop Dogg is an incredibly successful 50-year-old American rapper and songwriter, who is known for his sense of humour and prolific marijuana usage.

So what could these two possibly have in common that would lead them to be close friends for over 15 years?

Watch: Martha Stewart and Snoop Dogg play 'never have I ever'. Post continues below.

But in the same year, Stewart was convicted of insider trading: specifically one count of conspiracy, two counts of making false statements, and one count of obstruction of agency proceedings. The conviction was related to a 2001 incident where after gaining information that was not publicly available, Stewart sold her ImClone Systems shares one day before their value fell. The US Securities and Exchange Commission estimated that Stewart avoided a loss of more than US$45,000.

Prosecutors accused Stewart of lying about receiving the tip-off, which resulted in her spending five months in a minimum-security prison before five months of home confinement.

It was a case that shocked the entertainment industry, given one of its elite was off to prison and her lifestyle/cooking empire looked set to crumble.

At the end of 2004 she started her prison sentence, but beforehand she hired John Fuller - a "prison life coach" - to help prep for her prison stay.

Chatting about how he helps his celebrity clients, Fuller said to Mamamia's The Quicky: "The average person who has worked his or her entire life - maybe they're an upper or middle-class person - they have a lot of questions and a lot of fears. They're aware that prison exists, but they never planned on entering this world. Everyone in every prison has the same commissary list, so a celebrity doesn't have access to anything else too. That status doesn't really matter in prison."

Evie Litwok, an ex-inmate at the prison who served at the same time as Stewart, was interviewed by Talk Poverty about her interactions with Stewart.

"In the prison, everyone was required to work in the kitchen for their first 90 days. That is, everyone but Martha Stewart, who requested but was denied kitchen duty. I suspect she was refused because this chore might have given her an inkling of pleasure within the miserable prison environment. She was instead assigned to the humiliating task of mopping the floors and cleaning the toilets of the warden and other higher-ups."

Stewart later confirmed via an update on her website that her 'official job' in prison was cleaning.

In the same update to her website - which was published while Stewart was halfway through her prison stay - she wrote: "I beseech you all to think about these women - to encourage the American people to ask for reforms, both in sentencing guidelines, in length of incarceration for nonviolent first-time offenders, and for those involved in drug-taking. They would be much better served in a true rehabilitation centre than in prison where there is no real help, no real programs to rehabilitate, no programs to educate, no way to be prepared for life 'out there' where each person will ultimately find herself, many with no skills and no preparation for living."

After five months, Stewart was released from prison. In the years since, she has been quite open about the experience, noting that although she laughs and makes jokes about her "street cred" now, prison was incredibly challenging.

When asked whether her prison experience had led to "growth", Stewart replied: "That you can make lemons out of lemonade? What hurts you makes you stronger? No. None of those adages fit at all. It's a horrible experience. Nothing is good about it, nothing. I was a strong person to start with and thank heavens I was. And I can still hold my head up high and know that I'm fine."

Touching on the subject with Harpers Bazaar in 2021, Stewart said it was "a very serious happening in my life" but that she was "not bitter" about the experience.

"My only big regret that I can talk about is that Saturday Night Live asked me to host. My probation officer wouldn't give me the time. That really pissed me off, because I would have loved to have hosted Saturday Night Live. I'd like that on my resume."

As for Snoop Dog, his rap sheet is a bit longer than Stewart's.

Snoop has been in and out of the criminal justice system for a number of years, and although he hasn't served as much jail time as Stewart, he has been arrested at least eight times for various reasons.

Most of his charges are related to drug possession, and as a teenager he did a stint in jail due to cocaine possession. But in 1993, Snoop and his bodyguard were each charged with first and second-degree murder of a rival gang member. The rival gang member was killed by Snoop's bodyguard, but following a lengthy court case, both were acquitted of murder in 1996, claiming self defence. At the time Snoop was part of a gang, the Rollin' 20s Crips gang in Long Beach California. Soon after his court case, he left the gang and instead focused on his rap music career.

And his career has been incredibly successful since. He has a star on the Hollywood Walk of Fame, has a reported net worth of over $150 million and even performed in the Super Bowl Halftime Show this year. Stewart has experienced the same level of her success in her own field, going on to continue her magazine, host a cooking show, publish multiple cookbooks and rebuild her business.

So how did Martha Stewart and Snoop Dog become the best of friends? 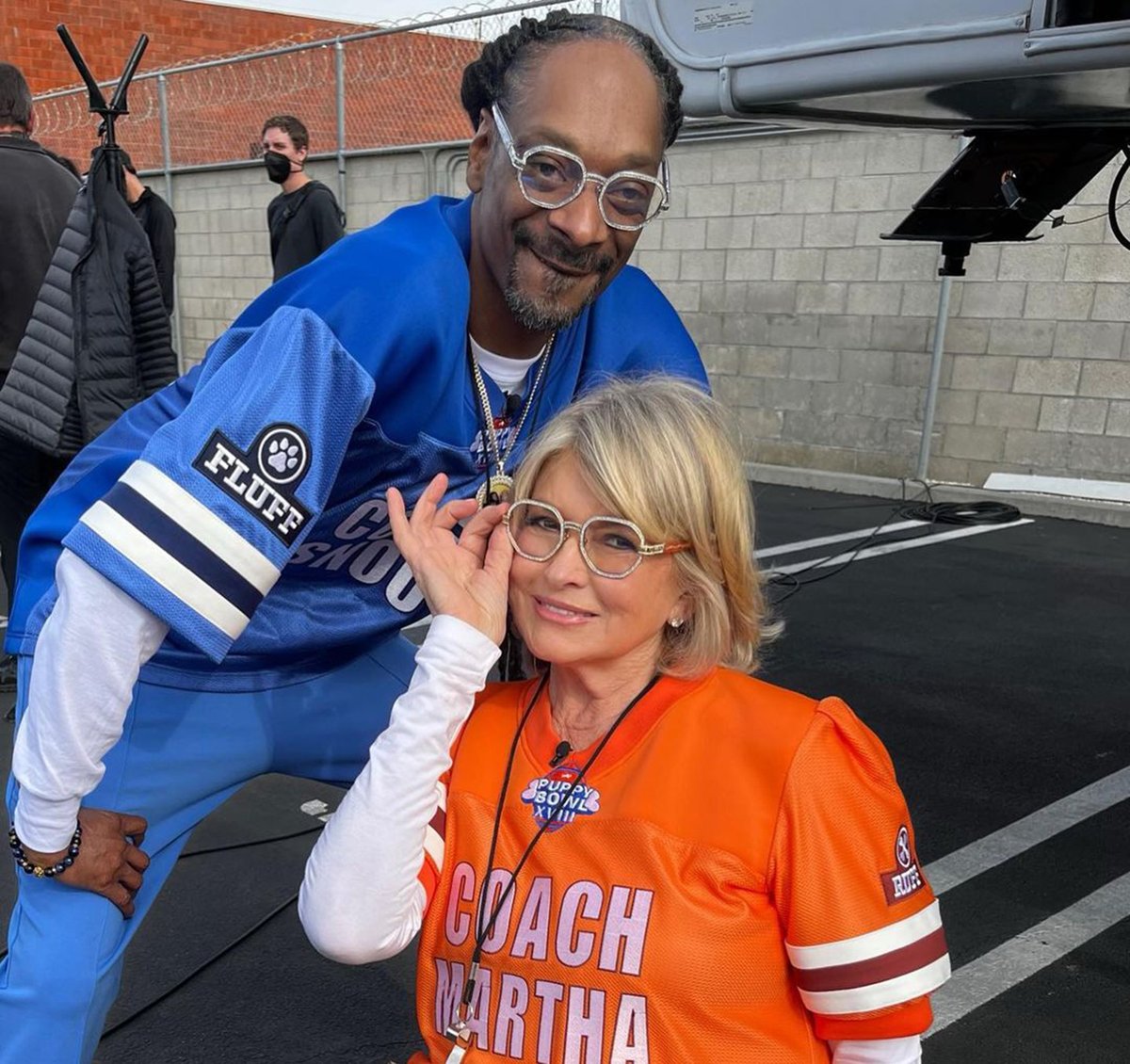 Image: Instagram/ @marthastewart. Their friendship dates back to a 2008 appearance Snoop made on Martha's cooking show. According to Stewart, they formed a friendship over their shared prison experience.

In a joint interview with the rapper in 2017, she said: "Yes, that [conviction] helped because people knew how crazy and unfair all of that was, and in Snoop's world, it gave me the street cred I was lacking. And if I could put up with that, the happy housewife, you know, I could put up with pretty much anything."

Snoop has also said how much he respects Stewart for 'doing her time' and refusing to name names or bring anyone else down with her back in 2004. Comparing rapper Tekashi 6ix9ine's trial to Stewart's, Snoop wrote on Instagram:

"As we watch Tekashi 69 (or whatever his name is) snitch on everybody, I invite you all to remember Martha Stewart snitched on not one soul during her trial. Baby girl kept it ten toes down and ate that prison sentence by herself, like the true baddie she is. That's my M.F. Home girl solid as a rocc (sic)."

On Watch What Happens Live, Snoop was asked about "the best jail story" Stewart had ever told him. He replied: "She told me that when she went in there, they told her to put some newspapers on her [body] to protect herself from getting stabbed. And she was like, 'Why not use my magazines?'"

In 2016, the pair also started their own cooking show: Martha and Snoop's Potluck Dinner Party.

Producers on the show said the pair have a lot in common including their friendship, prison experiences, the fact they're both self-made multi-millionaires with a "serious work ethic".

Reflecting on the unusual pairing, Stewart said: "Well, I think that cultures can clash, and cultures can actually meld. And that we're not all so different."

Snoop Dogg said: "We talk about once a week, and when I go that way [New York] I like to stay at her house - her house is so big, her horse's house is bigger than my house. She's got it going on. I love me some Martha Stewart she is just a joy to be around. When you think of Snoop Dogg [and Martha Stewart] it is just the perfect match, it's holy matrimony. "