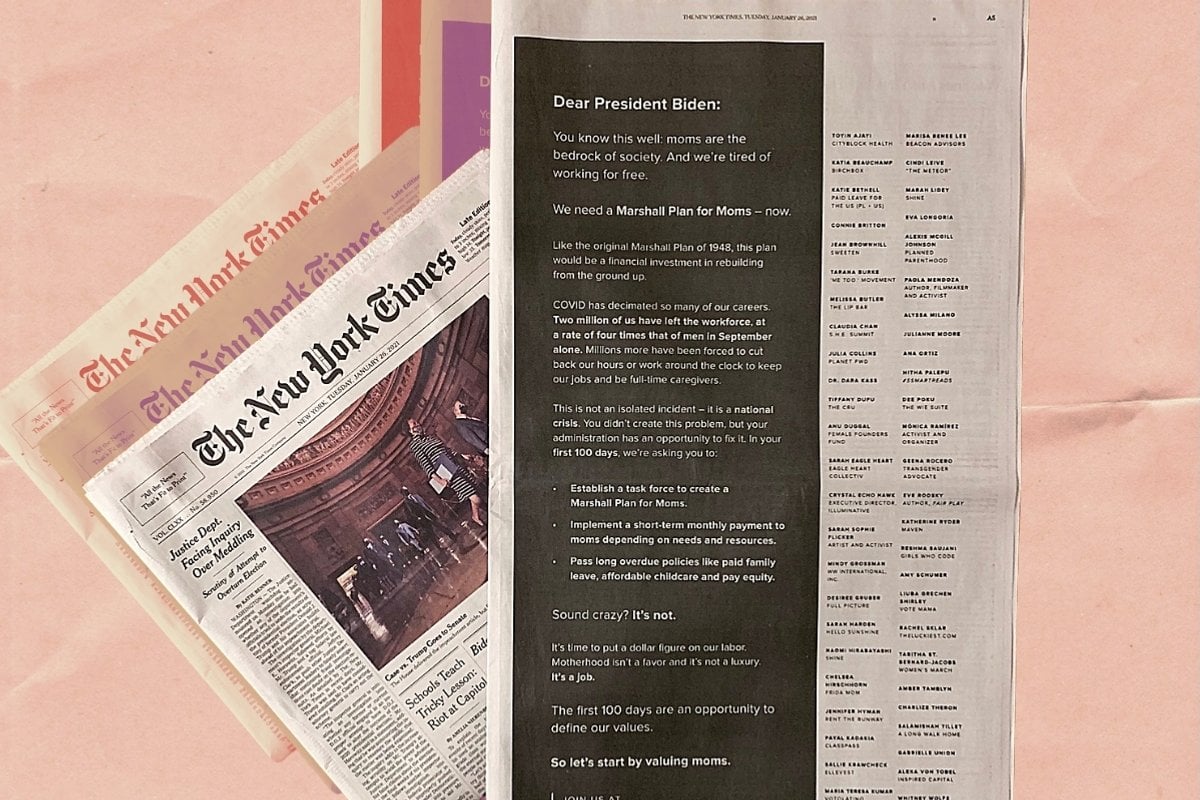 This week, a full-page advertisement appeared in The New York Times. It was in the form of a letter addressed to the newly inaugurated President of the United States, Joe Biden.

"Dr President Biden," it read. "You know this well: Mums are the bedrock of society. And we're tired of working for free."

Watch: Parenting in Australia isn't fair. But it could be...

The ad is part of a campaign called "The Marshall Plan for Mums" led by author, activist and founder of Girls Who Code, Reshma Saujani.

It's backed by 50 high-profile women who co-signed the letter, including the founder of the #metoo movement Tarana Burke and actors Alyssa Milano, Connie Britton, Charlize Theron, Amy Schumer, Julianne Moore and Eva Longoria.

Together, they are calling for the US government to pay mothers for parental labour and to introduce a raft of family-friendly policies that could help rebuild the economy amid the COVID-19 pandemic.

"Motherhood isn’t a favour, and it’s not a luxury. It’s a job," the letter read.

"The first 100 days [of the Biden administration] are an opportunity to define our values. So let’s start by valuing mums."

I am joining @GirlsWhoCode @ReshmaSaujani to call on the Biden Administration to pass a #MarshallPlanforMoms. We are in a national crisis, and moms are leaving the workforce in droves. We need to support them. https://t.co/q1fyIWwrlZ https://t.co/ytq8oHyHpl

So how would it work?

What is the Marshall Plan for Mums?

The Marshall Plan for Mums [or 'Moms', as they write in the US] is a viral campaign that calls for the US federal government to pay mothers for their "unseen, unpaid labour".

It's named after the 1948 Marshall Plan; a program engineered by US Secretary of State George C. Marshall that saw US$15 billion allocated to aid the rebuilding and recovery of western Europe after World War II.

Saujani's campaign declares that — like the original one — this plan would be "a financial investment in rebuilding from the ground up".

The United States is still grappling with more than 150,000 COVID-19 diagnoses daily, widespread job losses, and the ongoing closure of many schools and childcare centres across the country.

The campaign calls on President Biden to address this crisis with a mother-centric approach. It urges him to do the following within his first 100 days in office:

(The United States is the only OECD country that doesn't have paid maternity/parental leave at a federal level.)

How much would mothers be paid under the plan?

The letter and campaign website don't offer specifics beyond a short-term, means-tested monthly payment, and no end-date was provided. However, writing for The Hill in December, Reshma Saujani floated a figure of US$2,400 (AU$3,142) per month.

She later elaborated that the figure was based on the $600-per-week unemployment benefit given to Americans during the first round of COVID-19 relief.

"I think it should be means-tested," she told Yahoo! Finance. "I think it should account for the ones who need it the most and the impact that [the pandemic has] had. But the point of this is that we have to put a number on it... For too long mothers — women — have been the ones who've been lifting society up."

What about fathers and other guardians?

The Marshall Plan has drawn some criticism for being limited to mothers.

But Saujani has noted that while not all caregivers in the US are women, the majority are. And they are also significantly less likely to be employed (29.1 of mothers were not in the labour force in September 2020, for example, compared with only 7.8 per cent of fathers).

That's courtesy of a number of factors including lower rates of pay and fewer full-time employment opportunities for women, and social expectations about a 'mother's role' in the household.

Throw on top of that pandemic-related job losses and school/childcare centre closures, and you've got what the Marshall Plan campaign calls a "national crisis".

"We have a national crisis. Women's labor market participation is as it was in the 1980s."@GirlsWhoCode CEO @ReshmaSaujani took out a @nytimes ad. urging Pres. Biden to institute a #MarshallPlanforMoms.
"We need a 360 plan to get mothers back to work," she tells @PoppyHarlowCNN. pic.twitter.com/N75PUYAKe7

"COVID has decimated so many of our careers," the letter read. "Two million of us have left the workforce, at a rate of four times that of men in September alone. Millions more have been forced to cut back our hours or work around the clock to keep our jobs and be full-time caregivers."

Mothers of school-age children, in particular, are among the demographics recovering the slowest from job losses. Helping them catchup, the campaign argues, would benefit all.

"A Marshall Plan for Mums will stimulate the economy. It will give women the support they need so they can — eventually — get back to work," Saujani wrote for The Hill.

"And it will send a hugely important signal to little girls and young women across the country: that our society values the contributions of women, and that their careers, dreams, and lives will not be taken for granted."

What's the situation in Australia?

Australia does not have a basic-wage payment specific to mothers.

But it does have a federal 'Parenting Payment' for the primary parent or guardian of young children (under eight if the parent is single, and under six if they're in a couple). The payment is means-tested and is currently set at a maximum of $660.80 per fortnight for a parent/guardian in a couple, including the temporary $150 coronavirus supplement.

There's also the means-tested 'Family Tax Benefit' available at a maximum rate of $189.56 per fortnight for a child and $246.54 for a teenager.

Yet women still remain behind in key employment measures.

For one, pay equality: according to the Australian Bureau of Statistics data on 2020, women's full-time average weekly earnings were 86 per cent of that of men.

Women were also significantly more likely to be employed part-time. And that distinction was even more pronounced among parents.

For those with children under six, for example, three in five employed mothers work part-time compared to less than one in ten employed fathers. And in that same demographic, mothers were unemployed at twice the rate of fathers.

This is often interpreted as a product of Australian women still shouldering the majority of domestic responsibilities.

Indeed, the 2019 Housing Income and Labour Dynamics in Australia survey found that even in heterosexual couples where the woman was the primary earner, men performed an average of five hours less housework and eight hours less child care.

So what are alternative solutions?

Research by the Grattan Institute in 2020 concluded that the key to boosting numbers of Australian women in paid work and lifting the country out of recession is more affordable childcare.

Like the Marshall Plan for Mums, it positions mothers as key to economic recovery.

"The Federal Government should spend an extra $5 billion a year on childcare subsidies," the public policy think tank argued. "The payoff would be an $11 billion-a-year increase in GDP from the boost to workforce participation – and $150,000 in higher lifetime earnings for the typical Australian mother.

"Cheaper childcare would be a win-win – it would boost the economy and give Australian women enhanced life choices."

Reply
Upvote
3 upvotes
"Motherhood isn't a favour, and it's not a luxury. It's a job." While I'm not disputing anything in this particular sentence, I was disappointed as it would also have been a perfect place to acknowledge somewhere in this article that motherhood is also a privilege. There are many women, be it through circumstance or infertility, that don't get to experience that privilege and while we of course have empathy for the circumstances of women referred to in articles like this, it seems a little self- indulgent.  I 100 % agree that it is criminal that the US does not have federal maternity leave, however the majority of women choose to be mothers. It is a choice that that they are privileged to be able to make, and all choices come with responsibilities and consequences.
mystal84 a month ago