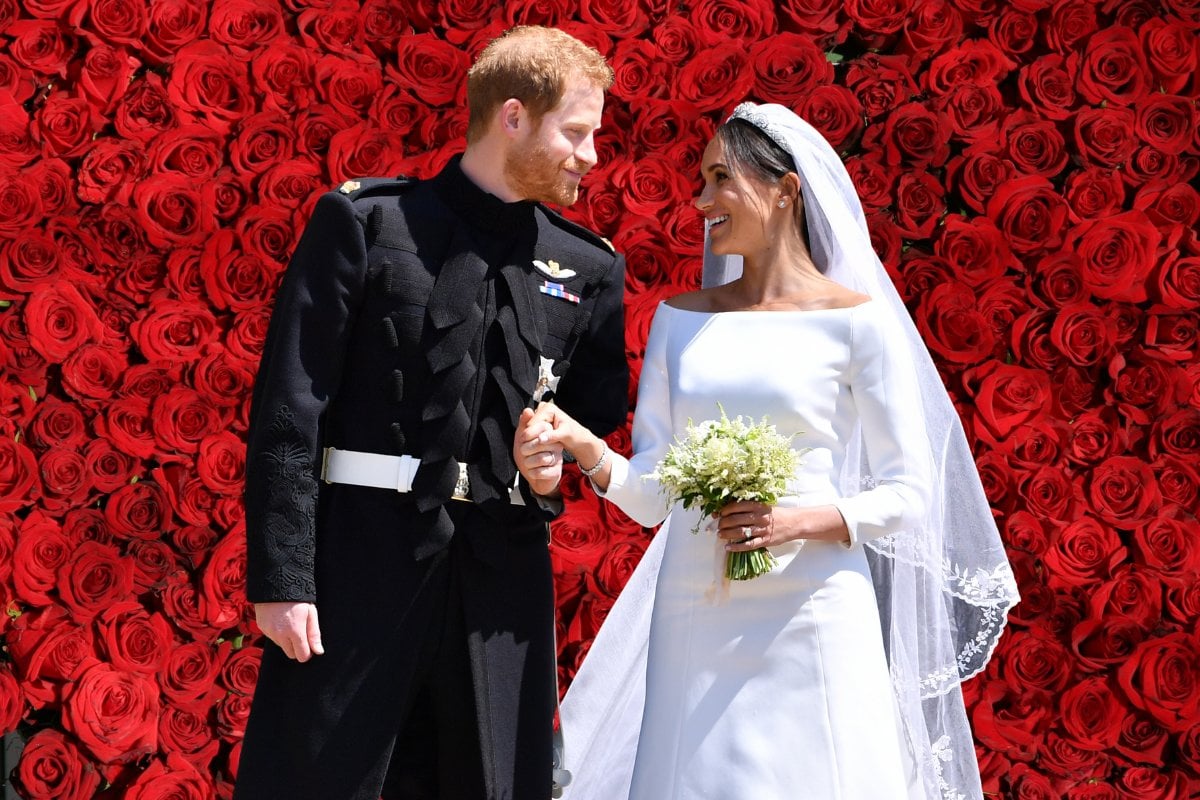 It was less than three years ago.

In a state of collective amnesia about the pretty s**tty fates that awaited most of the women who pulled on a vintage tiara and an improbably big dress to marry a prince, we all lost our minds about Meghan Markle marrying Prince Harry.

Watch: Meghan and Harry from birth to now. Post continues below.

It seems almost quaint, when you consider what has happened since, that the sunny Spring day in Windsor was considered something of a jolly morale-lifter for the British people. They were mired in a stinking Brexit stalemate. Trump was still A Thing. Sporadic, lone-wolf terrorist attacks stalked their major cities.

A great big wedding was just what everyone needed to buck right up. Bunting on streetlamps, commemorative tea-towels, ridiculous hats. A happy event, indeed.

"The wedding was great, wasn't it?" We all said to each other afterwards, as if it was the season opener of the last Game Of Thrones (actually, maybe it was). We critiqued the guest-list, the soundtrack, the performers, the costumes. "Loved what they did with it. Better than we thought," we said.

And Meghan Markle herself. What a breath of fresh air. A real person, with a past, a job, a life. Exactly what this fusty old royal family needs. Wills and Kate and Harry and Megs. Talking about mental health. Talking about race. Wearing clothes from shops we'd heard of. This was more like it.

Well, we really overestimated almost everyone, didn't we?

It's fittingly 2021 that the reality of what followed that optimistic day was a garbage fire of racism, bullying and denial.

As every single person in the world right now knows (because, let's face it, there aren't that many people who didn't watch Meghan and Harry showing Oprah Winfrey around Archie's Chick-Inn on Monday night), that fairytale was already a horror show before Meghan stepped foot outside her golden coach.

But if there's something positive to come from the revelations that the royal family and the "institution" they head up have learned precisely nothing in the last 40 years, perhaps it's this.

We can finally put the whole "princess" fantasy to bed.

Can't we? Can't we stop calling little girls that? Can we stop with the 'Daddy's Little Princess' bedazzled tees? And the fairytales that end with the wedding that looks just like the ones we know end in tears? Can we silence the collective gasp of envy and admiration for a woman who "snares" herself a prince, whether at the Slip Inn in Sydney during the 2000 Olympics or at a blind date in Soho after an ill-advised drink with Piers Morgan?

Isn't it time we stop suggesting that a smart woman marrying a member of a royal family is good news?

Listen to Holly on Mamamia Out Loud, Mamamia’s podcast with what women are talking about this week. Post continues below.

We didn't learn that lesson after Princess Diana, even when her "fairytale" ended with her adolescent sons being forced to walk behind her coffin at a funeral beamed around the world into millions of strangers' homes.

We didn't learn it after Fergie - Sarah Ferguson, not the Black Eyed Pea - was taunted as the 'Duchess Of Pork' because she was never 'princess thin', or when she was ridiculed and humiliated repeatedly for daring to try to make a living after divorcing a Prince of most questionable character (Prince Andrew, enough said).

We didn't learn it when it took Kate almost eight years to say any words out loud in public after marrying Prince William.

Or when, leaping across to Europe, Prince Albert of Monaco's bride Charlene tried to flee the country (twice) before she married him. Which she finally did, in tears.

And speaking of trying to flee the country, a then-suicidal Meghan Markle couldn't have done that if she tried.

In one of the many jaw-dropping moments of Oprah's interview, she said: "When I joined that family, that was the last time, until we came here, that I saw my passport, my driver's licence, my keys. All that gets turned over."

No KEYS, people. No autonomy over even your own front door.

Is that what any of us want for our daughters? A prison with diamond-flecked bars?

On that day less than three years ago, my wedding-watching companion was looking only at Meghan's mother, Doria Ragland, as she sat, glowing, alone on her family aisle.

"She must not be able to believe her luck," my colleague said. "Imagine coming from raising your kids as a single mum to this. She must be so proud."

Or so terrified. I like to think that Doria - a clever woman who's been a social worker and a business owner - was probably not thinking 'This is everything I could have dreamed of for my little girl'.

I like to think she was thinking, 'my daughter's too good for these idiots'. And she was right.

Our daughters can do a hell of a lot better than "Princess".

forgottenaustralianfamily 7 months ago
Reply
Upvote
Then there are the princesses in Dubai, and Saudi. The myth-busting needs to extend world-wide. Yes it’s true that being privileged carries advantages, but this should never be at the price of freedom.

mamamia-user-482898552 7 months ago
Reply
Upvote
2 upvotes
@forgottenaustralianfamily I don't think we can seriously equate the BRF to the situation of women in the Saudi royal family, however...

cat 7 months ago
Reply
Upvote
@mamamia-user-482898552 no one was doing that, they’re pointing out that the BRF doesn’t have the monopoly on princesses

mamamia-user-482898552 7 months ago
Reply
Upvote
1 upvotes
@cat Seeing as though Harry and Meghan have adopted a narrative of being "trapped" and subsequently "finding their freedom", I think it is fair to suggest their situation should not be compared to or conflated to that of Saudi female royalty. If anything, the issues faced by Saudi royalty should serve a stark contrast to the hardships claimed by those living in societies wherein people have free will and the ability to marry and work as they choose.

guest2 7 months ago
Reply
Upvote
1 upvotes
@cat There are hundreds of Princesses in Saudi Arabia, I think at one point there were around 2,000 members of the Royal Family.    Saudi Princesses and Queens do not have a public profile and little girls do not dream of growing up and marrying a 'Saudi Prince' as the marriages are still arranged and very much tribal.    Comparing Middle Eastern Royalty with European, is comparing oranges and apples.

chrissyinthemiddle 7 months ago
Reply
Upvote
3 upvotes
She was obviously able to access her passport because she went on overseas trips in a personal capacity to watch tennis, the NY baby shower and for holidays with Harry to Europe and Canada.

kareful 7 months ago
Reply
Upvote
1 upvotes
@chrissyinthemiddle   Also there is no requirement in the UK to carry your driving licence with you when driving. I reckon passport and licence were kept in a safe place to avoid theft. No idea what keys would be taken from her. Front door to Buckingham Palace perhaps?

guest2 7 months ago
Reply
Upvote
6 upvotes
@cat I think Meghan has managed to do that herself.