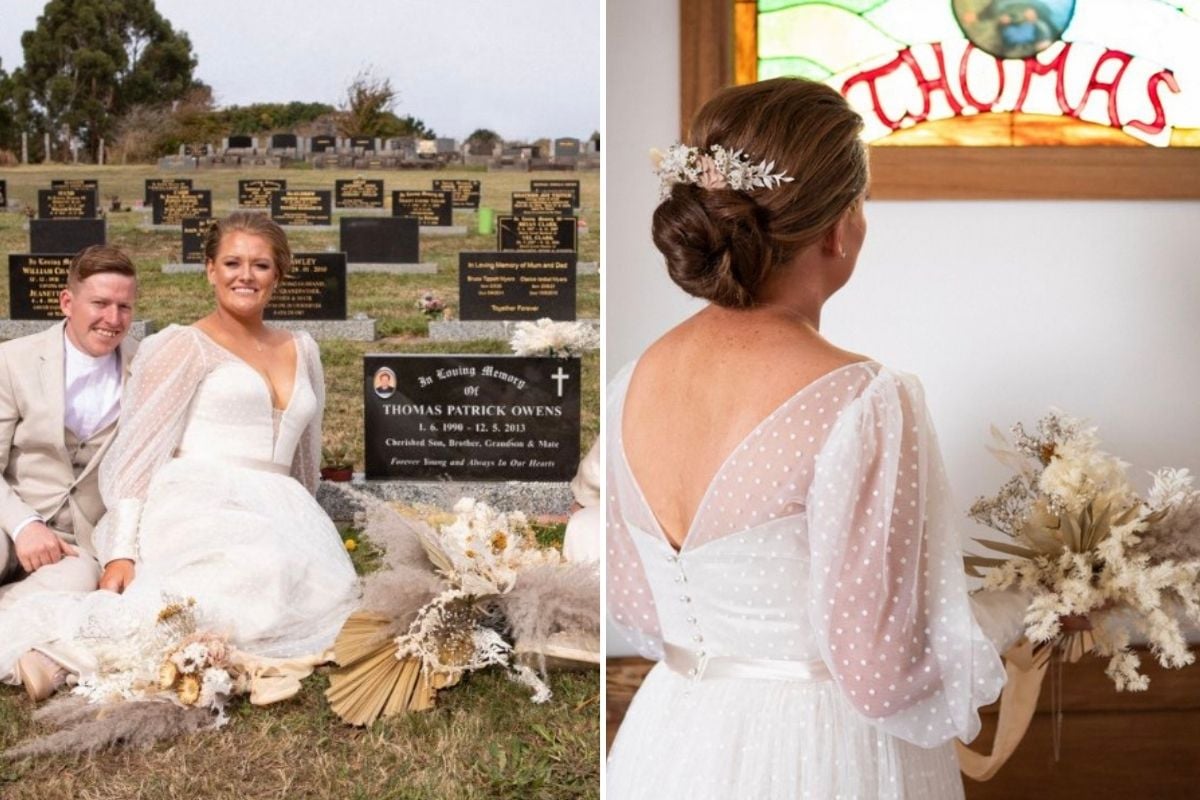 Madeleine Owens knew she wanted to get married in Pootilla cemetery, Victoria, from the day she got engaged to her now husband Corey Stevens.

It's where her brother Tom rests. He left this life on Mother's Day 2013 in tragic circumstances at the age of just 23, but he remains a big part of her family and as she tells Mamamia, the day wouldn't have felt complete without him.

When her brother first died, Madeleine, 27, says she found it hard to visit his grave, but as time went on she became more comfortable with her grief.

Tom's final resting place – with its pretty country setting – became a normal and integral part of the family's celebratory occasions. 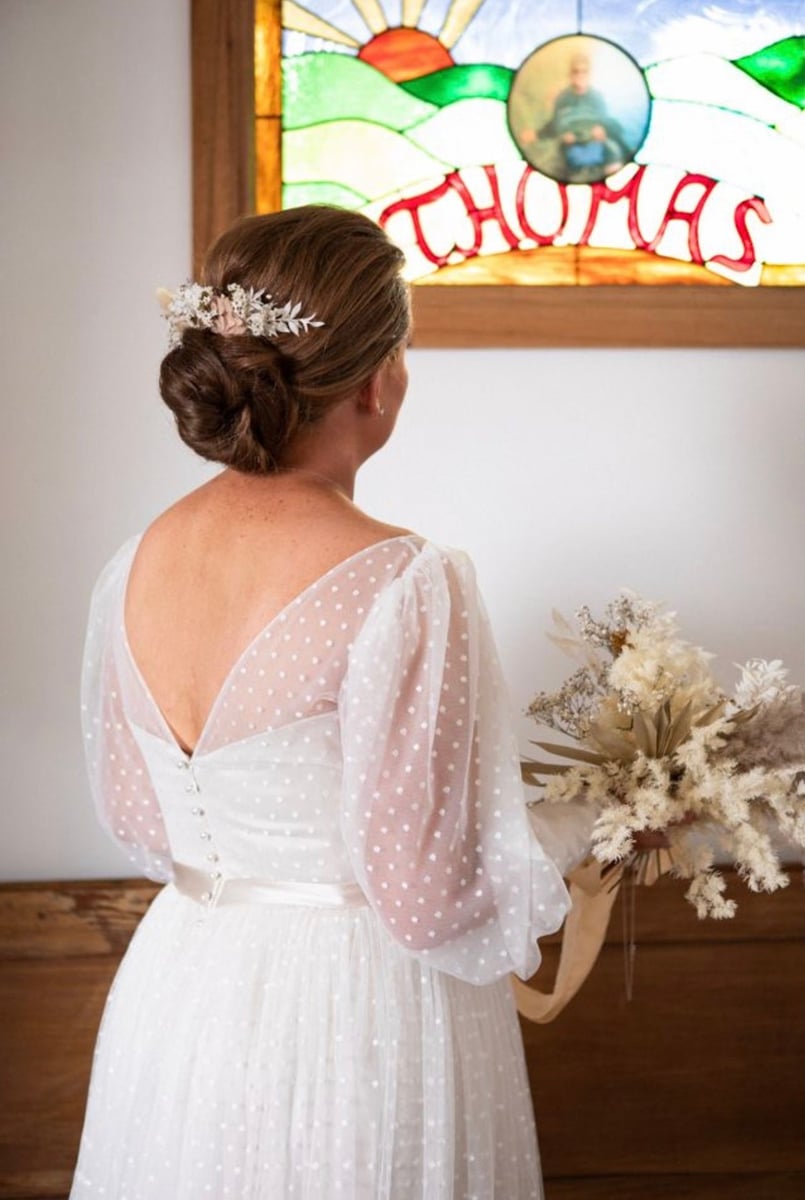 Tom was included in every element of the day. Image: Pepperberry photography/supplied.

It took four rescheduled dates thanks to COVID-19, but finally Corey and Madeleine tied the knot in February, 2021. They had a full Eucharist wedding ceremony at St Brendan’s Catholic Church in Dunnstown, about 15 minutes outside of Ballarat, and then headed to the nearby cemetery.

"There we had a simple and rustic style celebration which oozed heartfelt emotion, joy and love. On arrival all of our guests were offered champagne and formed an honour avenue, which we walked through as we made our way up to Tom’s grave," Madeleine explained.

"As a nod to my mum’s heritage, we had a lady lead the way as she played the bagpipes. It was so loud and moving and every guest said they felt this moment hit their soul. She played 'Forever Young', which was the song we carried Tom out of the church to, at his funeral. 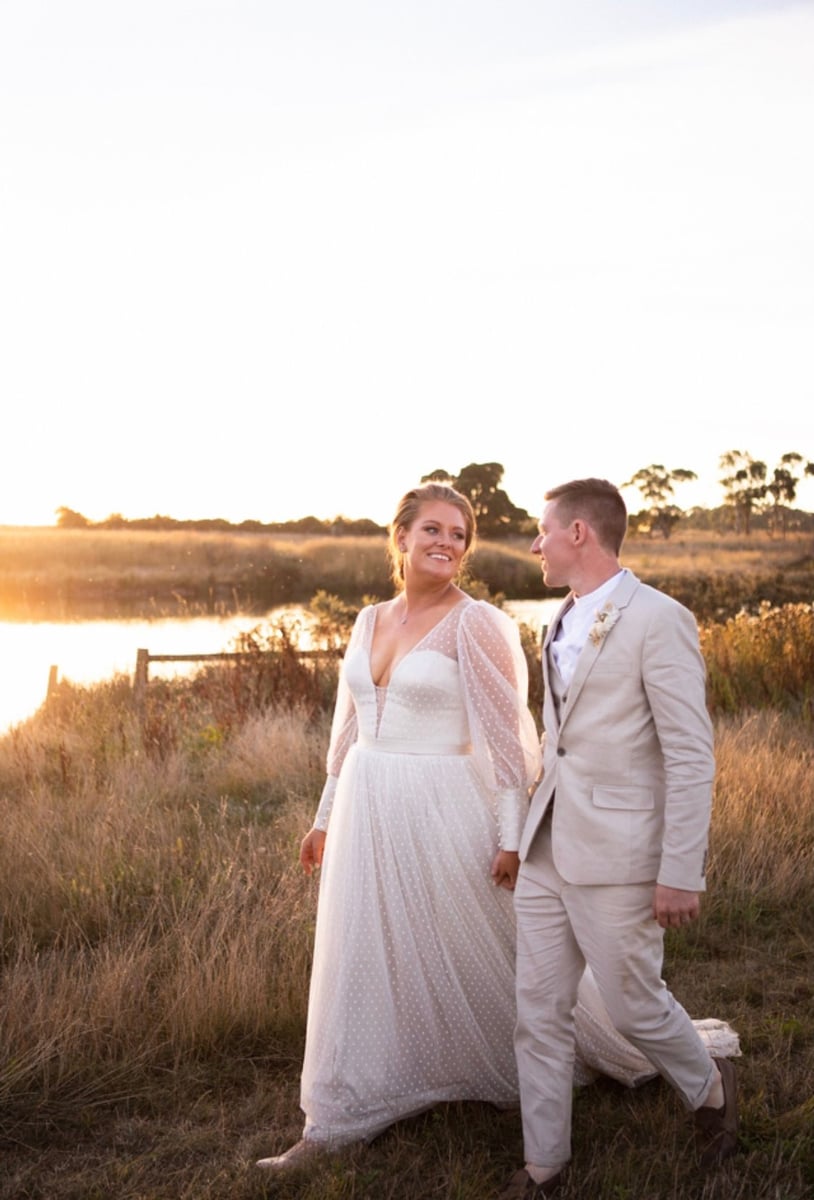 Madeleine and Corey got married in February, 2021, in the Central Highlands of Victoria. Image: Pepperberry photography/supplied.

Afterwards they set their guests up in a peaceful shady spot near the gravesites where they munched on canapé style catering and drinks. Madeleine was sure to include her mum's homemade sausage rolls, which were Tom's favourite.

They cut the cake there, and did a symbolic release of white biodegradable balloons into the sky, which Madeleine tells Mamamia were to represent a releasing of grief and the celebrating of new beginnings. 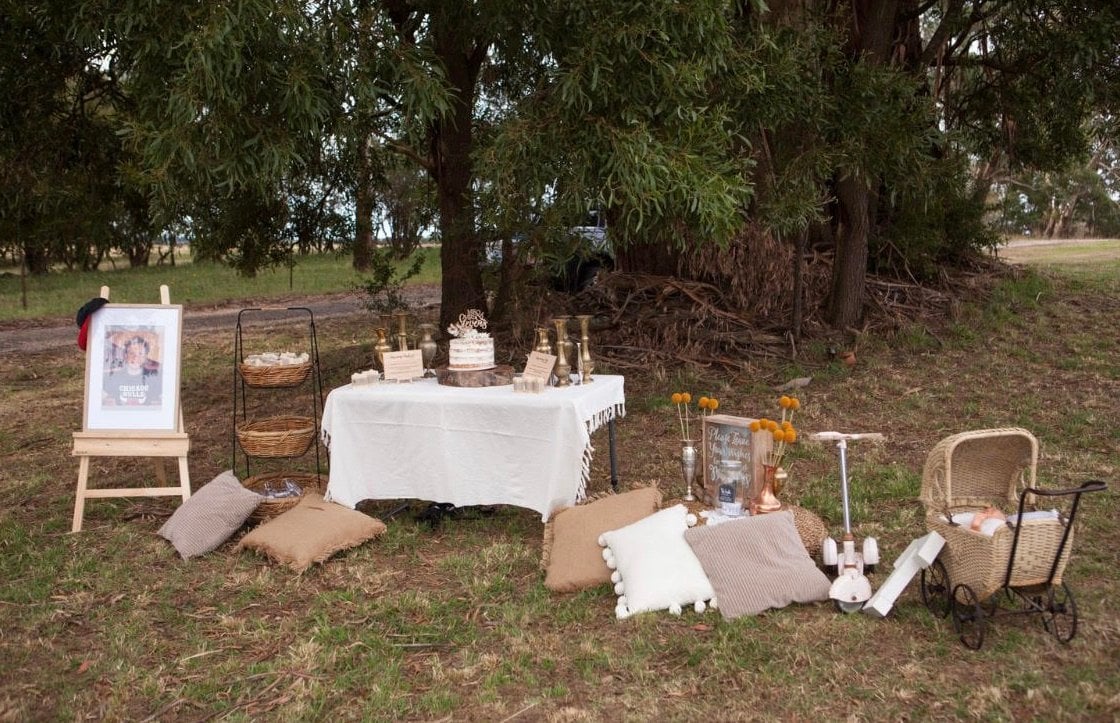 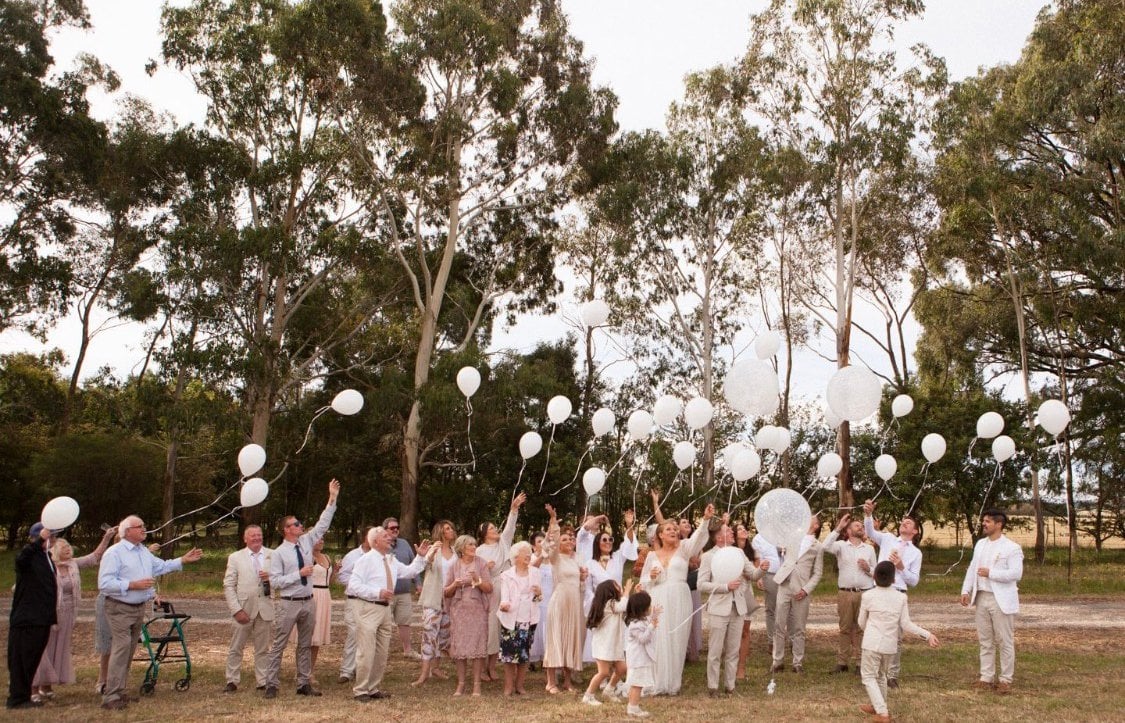 Everyone released balloons into the sky. Image: Pepperberry photography/supplied.

"We all watched on as they floated to the heavens to meet Tom. It was a really touching and wholesome moment for everyone," she said.

"Yes, our wedding was different because it was at the cemetery however we all had the best time and it didn’t feel sombre at all. Just joyful and incredibly special - our guests appeared to really enjoy the day too, with lots of comments that it was one of the best weddings they had been too. So despite it appearing strange to have a wedding at a cemetery, it was really well received by our guests," she added.

There was one young man at the wedding who had lost his mum about two years prior, and hadn't been to a cemetery since. Madeleine says he kept thanking them for making the experience a joyful one for him.

Other guests told the couple it was "the most beautiful, natural wedding they had been to" and one person let them know that, "even though I hadn’t met Tom being with him on your wedding just felt like I had known him forever." 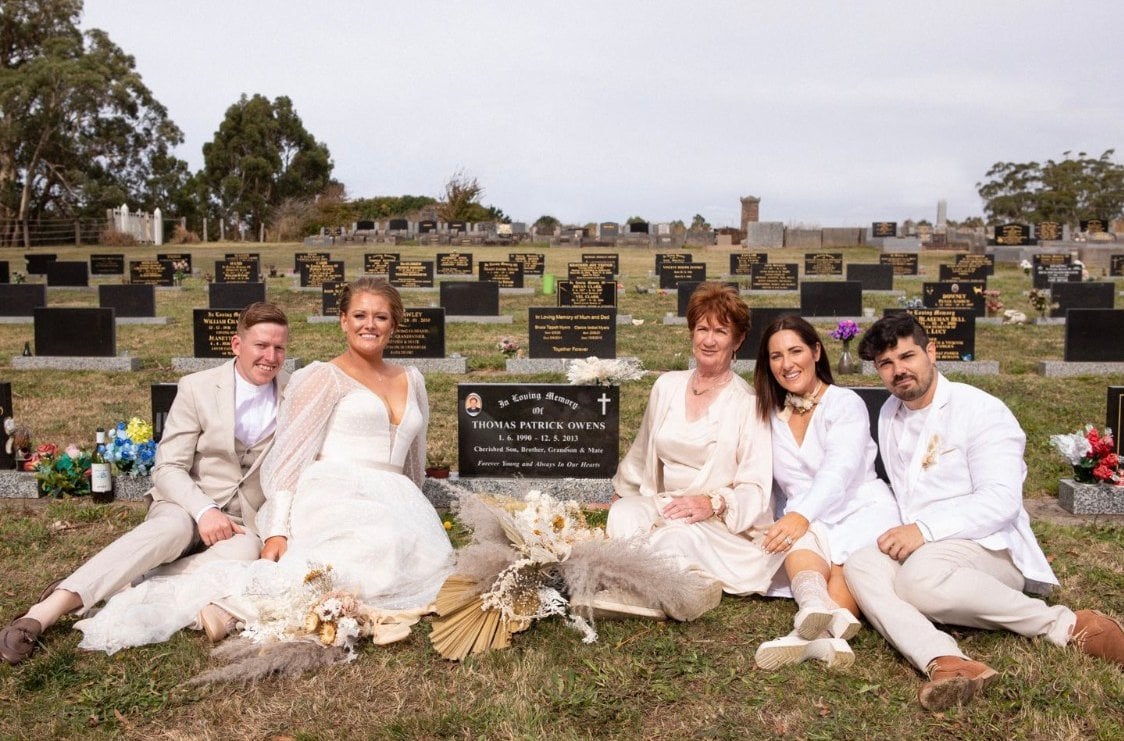 Corey and Madeline (left), with family at their wedding in February 2021. Image: Pepperberry photography/supplied.

After spending the afternoon at the cemetery, Madeleine and Corey went to the Sunflower Farm in Dunnstown with their bridal party for photos and then met their guests at a restaurant in Ballarat for dinner – where a vacant spot was left for Tom. They also had photos at the family home where a stain glass window with Tom's name has pride of place, and Madeleine made sure she attached an imprint of Tom's thumb – a charm each of his family members treasures – to her bouquet.

"The entire day was very inclusive of Tom and I loved that," she told Mamamia. "I’d love to see grief normalised and accepted more widely. We have these joyous celebrations at birth and then go on to celebrate throughout life and once death happens, that’s it." 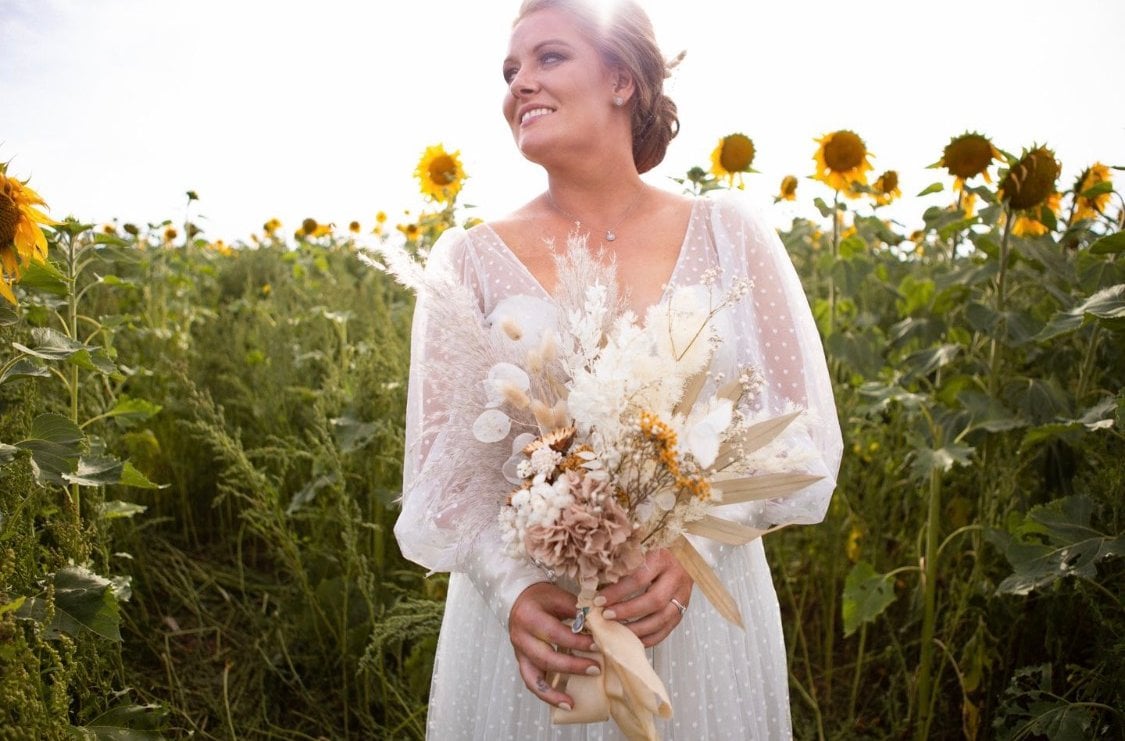 They had photos at sunset in a nearby sunflower farm. Image: Pepperberry photography/supplied. 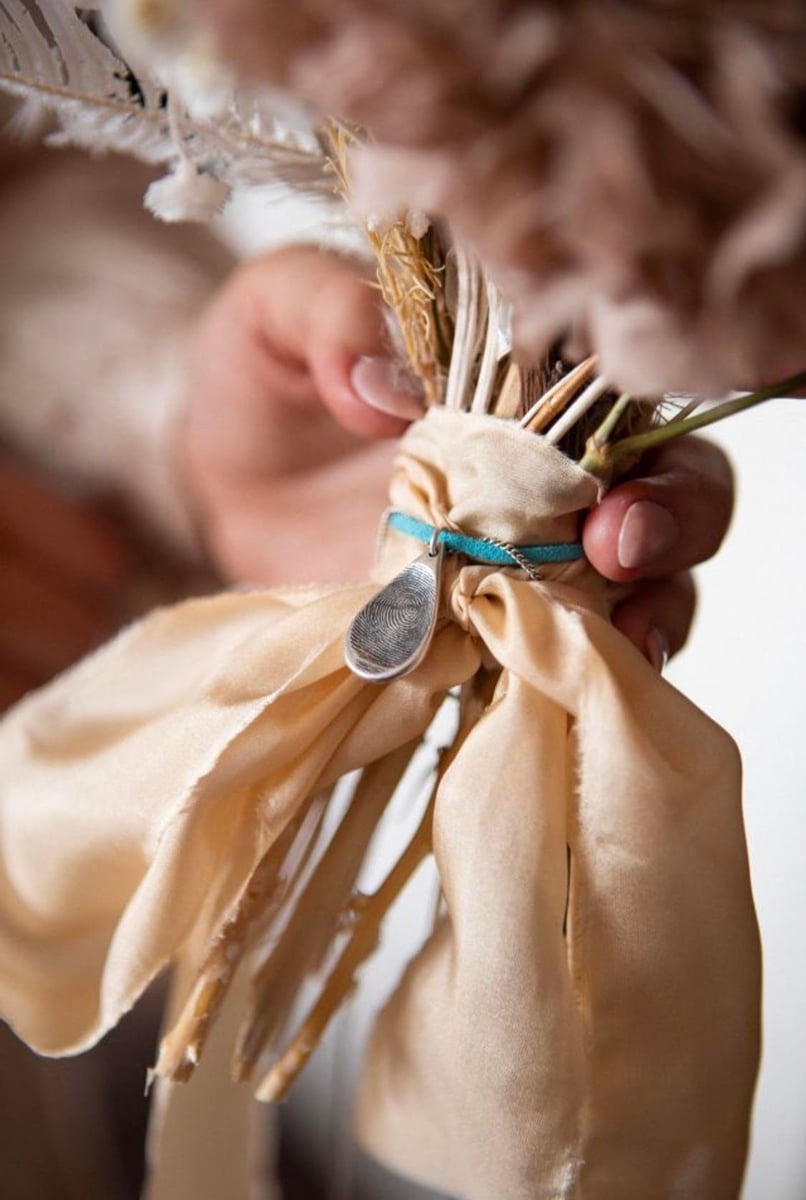 Madeleine knows her wedding is seen as 'unusual' to most, and she thinks it's unfortunate we have societal barriers that make death a "taboo topic."

It's her hope that her and her guests' joy can encourage people to feel less ashamed of their grief, and continue to "fly the flag" for those that've passed.

"It’s the cycle of life and I really believe we should celebrate our loved ones ongoing – particularly because Tom was only 23 and he had so much more of his physical life to live," she told Mamamia.